To compare real-life performance, I shot this scene with the Olympus OMD EM5 Mark II and Nikon D5500 within a few moments of each other, using their base sensitivities and taking care to match their vertical field of view. On this page I’m comparing out-of-camera JPEGs using the default settings. I’ll add a RAW comparison once both bodies are supported in Adobe Camera RAW. To make it interesting I’ve included three comparisons on this page using different lenses and quality settings to prove what you expect may not always be the case.

My first comparison here is with the OMD EM5 Mark II fitted with the high-end 12-40mm f2.8 zoom and the D5500 fitted with the DX 18-55mm VR II kit zoom; the lenses were set to f4 and f5.6 respectively for the best quality results on each system. So the first question is which will win in terms of real-life resolving power? A 16 Megapixel camera with a good lens, or a 24 Megapixel camera with an entry-level lens.

Even a cursory glance at my first set of crops below reveals that while the D5500’s 24 Megapixel images may be larger, they don’t actually contain any additional detail over the 16 Megapixel OMD EM5 Mark II. Indeed the crops made from the edges of the frame actually look crisper on the Olympus, even though the squarer aspect ratio means they’re actually made from closer to the edges than the Nikon.

The moral here is the importance of a decent lens, especially for high resolution bodies. To be fair the Olympus 12-40mm is a pro grade zoom so it should easily out-perform an entry-level kit zoom, but even so you’d be surprised how many people assume having more Megapixels is the key to higher image quality.

So the next natural question to ask is what happens when you fit the D5500 with something better quality, a lens that will allow it to enjoy its full resolution. To find out I reshot this scene with the D5500 fitted with the AF-S 50mm f1.8G, a prime lens that delivers excellent results. Scroll down to see how the combination compared.

The Olympus OMD EM5 Mark II offers a new 40 Megapixel High Res mode which captures eight frames, shifting the sensor slightly between each, before combining them into a single higher resolution image. Below I’ve compared the native 16 Megapixel output against the 40MP mode, the latter only available up to 1600 ISO.

The 40MP mode takes about one second to capture its eight images, so any motion which takes place during this process will result in undesirable artefacts. It therefore works best with still-life subjects like this composition, and it’s easy to see the additional detail captured. While it’s not obvious in this example, the 40MP mode also reduces colour moire that can plague very fine detail in normal pictures on any camera that employs a traditional Bayer colour filter array.

As the sensitivity increases, the 40MP mode remains clean, although since you’ll ideally need to shoot from a tripod, you may as well choose the lower ISO values. Below I’ve made one final comparison between the 40MP mode and the native 24 Megapixel output from the Nikon D5500.

Once again I’ll be updating these noise results with RAW comparisons when the EM5 Mark II is supported by Adobe Camera RAW, but in the meantime check out my Olympus OMD EM5 II sample images or skip to my verdict.

In my final comparison here I’ve pitched the 40 Megapixel composite mode of the EM5 Mark II against the native 24 Megapixel output of the Nikon D5500. From the subject below, I’d say the Olympus is resolving slightly more detail, and as noted above, can also better-avoid colour moire in the finest details.

Of course the downside is the 40MP mode requires the entire subject to remain static during the capture process, which rules out most situations. But in a controlled studio or reproduction environment, it can work very well.

Once again I’ll be updating these noise results with RAW comparisons when the EM5 Mark II is supported by Adobe Camera RAW, but in the meantime check out my Olympus OMD EM5 II sample images or skip to my verdict. 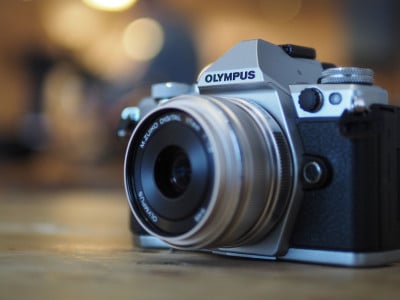