The Olympus OMD EM5 Mark III may have been a long time coming, but still manages to become one of the most unique and compelling cameras in its mid-range category Yes, the 20 Megapixel Micro Four Thirds sensor is smaller and slightly lower res than its APSC rivals and the price higher than many mid-range models too, but you’re getting class-leading stabilisation which transforms handheld video and lets you shoot at low sensitivities, coupled with arguably the best weather-proofing in its peer group. In addition it gives you a side-hinged screen which avoids hotshoe accessories, a mic input, uncropped 4k video, a composite high-res option and a bunch of innovative long exposure modes. I’d have liked it even more with Auto ISO for manual movies and location tagging over Bluetooth, and I’m frustrated greater differentiation in the range has driven the loss of some features from its predecessor, most notably the metal body, larger viewfinder and some connectivity. It’s also worth noting that APSC rivals generally deliver lower noise above 1600 ISO and I felt Sony’s AF system was superior during movies, but as an overall package it’s hard to find a more rounded camera than the EM5 III. Do compare the price closely with the higher-end EM1 II though which after discounts may not be that much more expensive - and in the short term while the gap is narrow, is well worth the stretch.

Check prices on the Olympus OMD EM5 III at Amazon, B&H, Adorama, or Wex. Alternatively get yourself a copy of my In Camera book or treat me to a coffee! Thanks!

The Olympus OMD EM5 Mark III is a mid-range mirrorless camera aimed at photo and video shooters who value portability and handheld use without compromising features and quality. Announced in October 2019, it’s the long-awaited successor to the EM5 Mark II launched four and a half years previously. It inherits the 20 Megapixel Four Thirds sensor from the EM1 II which finally brings confident phase-detect autofocus and 4k video to the EM5 series, while also boasting improved built-in stabilisation in a slightly lighter but still weather-sealed body.

My in-depth review of the EM5 III starts with three videos: my first-looks preview video for a quick overview of the new features, followed by my longer and much more detailed full review of a final production model. My third video is dedicated to the vloggers out there who are wondering if they have perhaps finally found their perfect model! If you prefer to read rather than watch, I’ve written-up the highlights of my overview below, followed by a page of sample images and my final verdict which compares it to the competition. So if you’re shopping for a classy mid-range camera, you’ve come to the right place!

If it’s been a while since you’ve seen the EM5 Mark II, you’ll assume the Mark III version simply swaps the sensor and processor for those in the EM1 Mark II, but Olympus has actually taken the opportunity to redesign the body and control layout. As before it remains surprisingly comfortable in its compact form with a small but effective grip and a now more pronounced thumb rest. Switching to a poly-carbonite body, along with a smaller stabilisation unit and lighter battery has allowed a weight-saving from 469g to 414g including battery. It definitely feels lighter and inevitably less dense than the Mark II, indeed more like the EM10 Mark III, but it remains more weatherproofed than rivals and Olympus assures me it’s as robust as before.

I found the body alone felt fine in my hands, but if you fancy more to hold onto, an optional grip screws into the base, increasing the height and depth, while offering a repositioned shutter release and finger dial. Unlike the similar grip for the earlier Mark II though, there’s sadly no headphone jack on the new one, and the old grip is not compatible.

The top of the camera reveals a number of control tweaks. On the upper left side, the Mark II’s mode dial has been switched for the power, drive and display control similar to the EM1 II that’s inspired by the film rewind lever on old 35mm SLRs. The lockable mode dial has now been relocated to the right of the viewfinder head and now offers a dedicated Bulb position for easier access to the unique Olympus live time and composite options. Meanwhile Olympus has still squeezed in generously-sized and very tactile finger and thumb wheels alongside exposure compensation and movie record buttons; the ISO button is positioned in the upper right corner of the rear.

I want to give a very respectful nod to the Olympus designers for the finger and thumb dials on all of its OMD bodies which prove you don’t need to compromise on comfort and feedback on a small body. To me, cameras like the EM1 and EM5 feel and operate like some of the best cameras of any size and companies like Fujifilm and Sony would do well to use them as inspiration. I should also add the Mark III retains a fastest mechanical shutter of 1/8000 when most rivals stop at 1/4000.

I’m also glad to see the EM5 III inherit focus bracketing as well as in-camera focus stacking for smaller bursts, along with Pro Capture for buffering the moments before you fully push the shutter, while the Tripod High Res shot now generates 50 Megapixel images.

Like the EM5 Mark II, the screen remains side-hinged and fully-articulated, making it one of the few cameras around now with this capability. I realise side-hinged screens typically require two motions to angle out unlike the quicker mechanism of a vertically-tilting screen, but they offer so much more flexibility while also avoiding any hotshoe accessories when facing forward. As a vlogger and someone who shoots portrait photos at high and low angles, I prefer this approach.

The built-in viewfinder sticks with an OLED panel with 2.36 million dots and a slightly lower 0.69x magnification – all par for the course at this price, but Olympus has provided a generous 27mm eyepoint making it more practical for wearers of glasses.

Behind three flaps on the left hand side, you’ll find a 3.5mm microphone input, a remote jack for the optional RM-CB2, Micro HDMI and Micro USB ports, the latter now thankfully supporting USB charging in-camera, although not power delivery for actual operation. The PC Sync port of the Mark II is also missing.

Interestingly Olympus has switched battery packs to the BLS-50 that powered the EM10 III to save size and weight, although in terms of overall volume it’s actually quite similar. Olympus quotes 310 shots per charge or around 110 minutes of video recording, all of which I’ll test in my final review. Again you can charge the battery internally over USB.

Meanwhile the memory card is housed behind a door on the grip side of the camera – handy for easier access compared to most rivals which house them alongside the battery.

The headline upgrade over the Mark II is adopting the sensor first introduced on the EM1 Mark II three years earlier. This not only boosts the resolution from 16 to 20 Megapixels, but crucially brings embedded phase-detect autofocus to the EM5 series for the first time. It’s long overdue, but the sensor transforms the overall handling and experience with 121 cross-type points spread across the frame, bringing confident refocusing for stills and video.

Olympus has also improved the built-in stabilisation, claiming up to 5.5 stops with unstabilised lenses, or up to 6.5 stops when working alongside optical stabilistion with Sync IS lenses like the 12-100mm f4 PRO. The Olympus stabilisation remains one of the most effective systems around and has allowed me to handhold exposures of several seconds. On the EM5 III I actually managed to handhold several 24mm equivalent shots with the 12-100mm lens at two to six seconds!

Like all Olympus mirrorless cameras, the EM5 III is based on the Micro Four Third standard that may use a smaller sensor than APSC, but in my tests still delivers great results. Olympus claims newer processing allows 6400 ISO shots to match the quality of 1600 ISO on the older Mark II and remember thanks to the effective stabilisation you’ll often be able to handhold slower shutters, allowing you to deploy lower ISOs for static subjects or enjoy motion effects with moving ones. Meanwhile the Micro Four Thirds lens catalogue is the broadest and most established of all the native mirrorless systems with loads of great options that all become stabilised on the body.

The movie capabilities have been upgraded in line with the recent Olympus models, supporting 1080 at 24 to 60p, 4k UHD at 24, 25 or 30p, and even Cinema 4k in 24p at a high bit rate of 237Mbit/s. Sadly there’s no Auto ISO in Manual exposure mode though. You can see many examples of the EM5 III in practice in my three review videos at the top of this page.

Check prices on the Olympus OMD EM5 III at Amazon, B&H, Adorama, or Wex. Alternatively get yourself a copy of my In Camera book or treat me to a coffee! Thanks!
Pages: 1 2 3 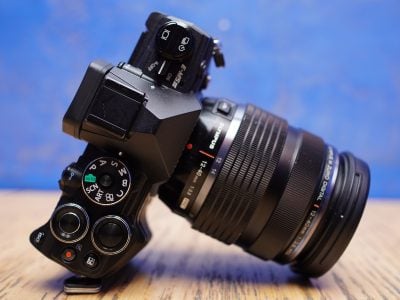 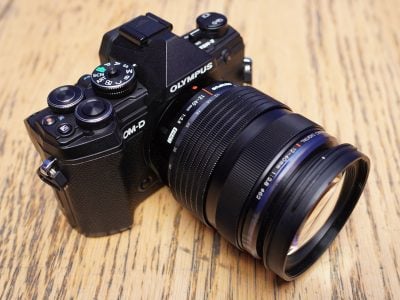 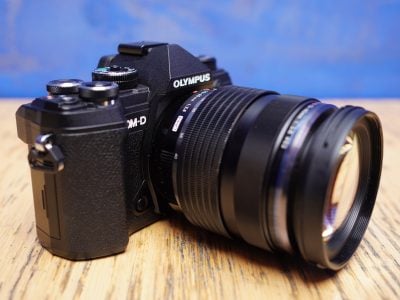