The price-performance ratio of the AF-S DX Micro-Nikkor 40mm f/2.8G is excellent and had it not been for the incredibly short working distance at 1:1, this lens would have easily earned a Highly Recommended award. But this weakness puts a serious dent in the otherwise shining performance – and thus it’s awarded with a Recommended. So long as you understand the limitations of this lens (again the short 1:1 distance and lack of VR), it represents great value for owners of DX format DSLRs who want to start exploring the joys of macro photography.

The AF-S DX Micro-Nikkor 40mm f/2.8G is the most affordable macro lens for Nikon’s range of DX format DSLRs, and as an AF-S model, it’ll autofocus on any Nikon body. Yes you read this right: it’s even cheaper than any lens capable of 1:1 magnification from Sigma or Tamron. If you think that doesn’t bode well for the performance of this little lens read on: there’s a pleasant surprise waiting for you!

Announced in July 2011, the 40/2.8G is the latest addition to an impressive line-up of six macro-lenses from Nikon. It’s the shortest of the bunch and one of only two macro lenses from Nikon which is specifically designed for DX format bodies.

Mounted on a DX body, the 40mm delivers an equivalent focal length of 60mm, making it only slightly longer than a so-called ‘normal’ lens, and with a maximum aperture of f2.8 it is brighter than most zooms. So it could double up as a standard-prime, albeit not as bright as Nikon’s 35/1.8G but with the key benefit of going far beyond the meager 1:6 magnification of that lens. This sounds like a compelling option for owners of DX bodies and in this review you’ll find out whether it delivers decent performance despite its low price. 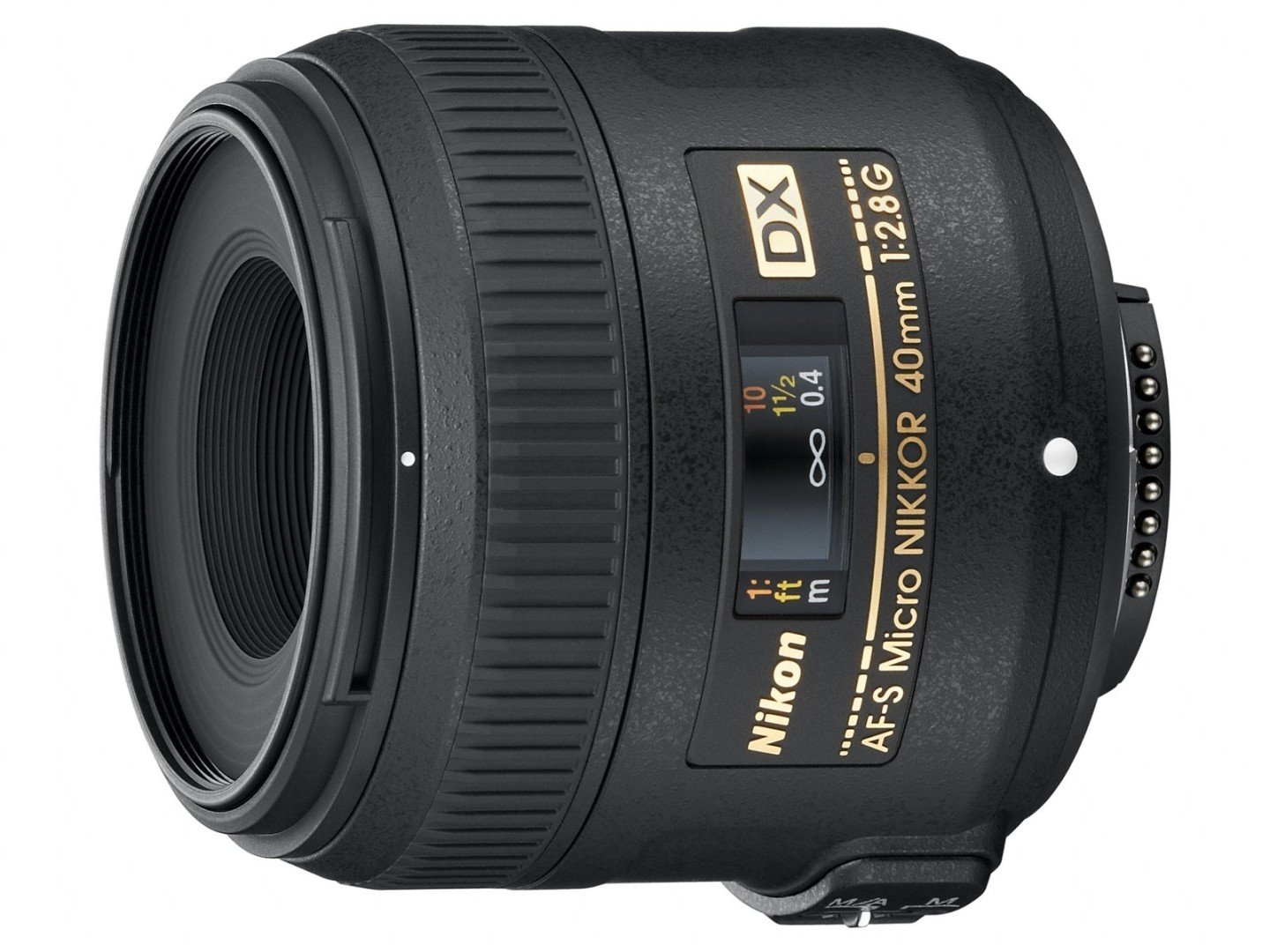 Let’s have a look at the technical data. We’ve rated the features with a [+] (or [++]) when it’s better than average or even state of the art, a [0] if it’s standard or just average, and [-] if there’s a disadvantage.

Optics: 9 elements in 7 groups. Only the old Micro-Nikkor 60/2.8D has less elements. The design of the lens is quite simple with no exotic glass, aspherical elements or special coatings. [0]

Closest focus distance/max. magnification: 0.16m / 1:1. Magnification of 1:1 is standard with Nikon’s Micro-Nikkors, but other manufacturers call some of their lenses “macro” while only reaching 1:4 magnification. So this is a clear [+] for the Nikkor. But the other important thing with magnification is the working distance from the front lens at 1:1, a figure that is rarely published in the technical data. When I measured the 1:1 working distance on this lens I was quite shocked to find it at only 3cm from the front. This makes proper lighting of the front of your subject a very special challenge and is much too close for the comfort of many small critters! [-]

Image stabilization: No = a pity! With its short focal length it might not be as prone to shake as longer macro lenses, but the closer you focus the stronger the magnification of any shake becomes. So if you want stabilization in a macro lens you have to go for the larger and more expensive Nikon 85/3.5 VR or the Nikon 105/2.8 VR. [-]

Auto focus: AF-S with SWM (silent wave motor), so it works on any Nikon DSLR and you also get manual-focus override by turning the focus ring. The focus scale has a third line that shows magnification in addition to the shooting distances in m and ft. [+]

Covers only DX-sized sensors = you have to upgrade your lens (or shoot in DX-mode) should you buy an FX body. [-]

Distance information is relayed to the camera, so the Nikon body can do all the advanced exposure-related stuff with this lens. But this is true for all the alternatives too. [0]

Sealing: yes! There’s a rubber grommet on the lens-mount. [+]

So the score in the “features-department” is 3[-] / 4[0] / 7[+]. That is pretty good considering the low price of this lens. Only the DX-format, the very short working distance at 1:1, and the missing image stabilization are deficiencies that you need to take into account when you consider buying this lens.

A 40mm macro-lens is for getting close to your subject and showing details other lenses can’t show. And it also doubles up as a standard fixed focal lens. Plus there are expectations that macro-lenses are pretty sharp. But you have to wait just a little bit to see whether the lens fulfills this expectation.

– The AF-S Micro-Nikkor 60mm f/2.8G ED. Larger, more expensive, covers FX-sensors.
– The Sigma AF 50mm f/2.8 EX DG Macro. A little larger and a bit more expensive, covers FX-sensors, no silent AF-drive.
The alternatives are said to perform pretty well, so if you want a longer focal length and/or the guaranty that the lens works on your next FX-body, have a look at those contenders.