With lenses offering an aperture of f2.8 or larger I test for longitudinal CA (loCA, a.k.a. “axial color” or “bokeh CA”). The Nikon shows a clear magenta coloration in the foreground (left) and greenish hues in the background (right). By f5.6 the effect is gone.


This also shows up in real-life shots especially under high-contrast conditions (specular highlights like sun on water or other reflecting surfaces or trees against the sky) and gets more pronounced the closer you focus. Unfortunately it is not easily corrected in post-processing, unlike lateral CAs. The coloration can be so strong that you can immediately recognize it even in a thumbnail of an image. See the following crass example shot from around 1.3m.

For an example of loCA on specular highlights have a look a the sample image of the creek on the next page.

Let’s have a look at the theoretical performance (MTF-charts) compared to the Nikkor 50/1.4G first:

These charts show the lens-performance at the largest aperture f1.4. Higher values are better and the closer the dotted and the continuous lines of each color are together the less astigmatism (= resolution depends on the orientation of the test-pattern) the lens has. The x-axis displays the distance from the optical axis (=center of the sensor) in mm. I’ll show you the real-life performance at 4 mm (center), 13 mm (DX-corner), and 20 mm (FX-corner) on a D800.

From the charts the new lens should perform on a higher level regarding overall contrast and sharpness (contrast with finer details) – and that at every point on the sensor. Astigmatism is also clearly reduced. But contrast drops steeply in the last 3mm of the FX corners, but that’s not affecting the DX-corners. Looking at these charts you should always keep in mind that these are recorded at f1.4 – an aperture that is extraordinarily large. Let’s see how this theoretical performance translates into real life results in the sharpness test based on Siemens-stars – and how the performance increases when you stop this lens down.

What follows are near-center results (first column) followed by DX-corner results and FX-corner results on a D800. The D800 results from the DX-corner should be a very good approximation for performance on a 16MP DX sensor (like the D7000), because the pixel-pitch of both sensors are the same. But differences in the AA-filter and micro-lens-design of a D800 and a D7000 might yield different end-results.

Processing was done in Lightroom 4.4 from RAW at camera standard settings. Noise-reduction is set to 0, sharpening to 70/0.5/36/10, with no extra tone, color, or saturation-adjustment. White-balance was adjusted to a neutral white and I did some exposure compensation to make the brightness match. CA-removal is ON. Focus was optimized for center, DX-corner and FX-corner respectively at f1.4.


These 100% crops directly from a 36MP D800 sensor show that this lens is a very good performer in the center with quite impressive resolution already at f1.4 and a contrasty rendering. Stopping down the lens exhibits a bit of focus shift (towards the background) that shows itself here in the magenta coloration which peeks at f2.8. Still the focus shift does not prevent the lens from becoming sharper and sharper with each stop so I would not deem it critical – except for the magenta shift that can be quite obvious in many shots.

At the DX-corner the Nikon 58/1.4 has some field curvature and residual spherical aberrations that have to be corrected for if you want the best results: Better use a focus point in that area and overshoot a bit (focus farther away than the camera is suggesting) if you want to achieve the highest resolution. This comes with a magenta halo bleeding into darker areas but the resolution that you can achieve wide open is good. Stopping down to f4 solves this problem completely.

In the FX-corner the field of sharpest image curves back to where it is at the center, so no special attention is needed here. But overall contrast and resolution of fine details is suffering wide open and when you stop down astigmatism becomes the factor that is limiting the performance in the far corners. Even at f8 the differences in sagittal and meridional/tangential resolution can be clearly observed. But keep in mind that these are 100% crops from a 36MP sensor and that the probability that the far corners of a real-life subject are still in the plane of sharpest focus (or even relevant for the image) are pretty slim.

Diffraction is setting in at f11 albeit only slightly. So you can easily shoot your landscape or long exposure shots with this lens at f11 and not worry about much softening. Distortions are minimal.


As you can see, price does matter: The new lens has higher resolution, higher contrast, and less coma wide open than its cheaper sister.

The Siemens-star test-targets are shot at a distance of 40x focal length (i.e. at 2.2m). But performance of lenses also depends on the shooting distance. Therefore I do another series of test-shots of a landscape dubbed the “Unremarkables” where you can measure distances in km, not meter. I use this scene to show you how the lenses perform when almost everything is at infinity. I set White Balance to a standard daylight value to make them comparable across lenses shot at the same day and also try to make exposure comparable. There’s no tinkering with vignette-control so you see it here as it is produced by the lens. Focus was manually acquired at the largest aperture in live-view and not changed for other apertures.

The main image shows the complete scene at f1.4 to give you an impression of the angle of view and to judge vignetting. This is followed by one row of 100% crops at f1.4, f2.8, and f5.6 each from the middle, the APS-C-corner and the right FF-corner.


Performance is pretty impressive even wide open just right into the FF-corner – clearly better (again) than from the Nikon AF-S 50mm f1.4G. So at distant targets the lens does not show much field-curvature. Vignetting at f1.4 is moderate. Stopping down to f2.8 brings center sharpness to a very good level and the vignetting is almost gone. But sharpness in the DX- and FX-corners is still not optimal. Stop down to f5.6 get very good resolution across the full-frame sensor.

If you want to see this scene at night, head over to the next page with sample images.

All-in-all the lens is a very good performer near and far even on the very critical 36MP sensor of a Nikon D800. So you can really use this lens wide open and get good results. Just look out for circumstances where longitudinal CAs raise their ugly head.

This test is for the rendering of point-light sources in the background. The circle of confusion that is produced by this test is pretty indicative of Bokeh performance (in the background) and light fall-off. Ideally the out-of-focus image of the point-light is evenly lit and perfectly circular, with no “onion-rings”, and without coloration. Large aperture lenses normally produce an effect known as “cat’s eye” the further away from the optical axis the point-light is projected. This is due to optical vignetting in the lens barrel when light enters the lens from an angle. For an explanation of this effect have a look over at toothwalker.org.


The Nikon 58/1.4G produces a very large circle of confusion which is around 20% larger than from Nikon’s 50/1.4G. It exhibits a pretty even light-distribution across the circle with only weak onion-rings. This is a good prerequisite for high Bokeh quality. But it has some green outlining due to loCA and shows some obvious cat’s-eye effect towards the borders/corners of the sensor. The clipping on the top of the right-most cat’s-eye seems to come from the mirror-box of the D800 body and effects all circles at the top of the FX-sensor (showing up at the bottom of the image). The clipping is gone by f2.8 and by f4 the cat’s-eye effect is completely gone in the FX-corner. For real-live Bokeh performance head over to the next page.

Shooting normal or wide-angle lenses always runs the risk of catching a strong light-source like the sun shining directly into the lens. This could produce strange colorful ghosts-images or reduce contrast considerably through flare and glare.

The appearance of flare and ghosting depends on factors like the aperture and the angle of the light hitting the lens. So to judge the proclivity of a lens for these artifacts I went through a series of well calculated shots against a strong light source to provoke glare and ghosting.

The image shows one of the worst flares that I could produce with this lens in the upper right corner – and that does not look too devastating. Of 22 shots under similar conditions four showed comparable flare and seven others showed weaker flare and some less pronounced ghosts. There’s little veiling glare in these images and the blacks are pretty deep. So Nikon’s secret “Nano”-sauce seems to work very well.

Now let’s check out some Nikon 58mm f1.4 sample images, or if you’ve seen enough, head over to my verdict. 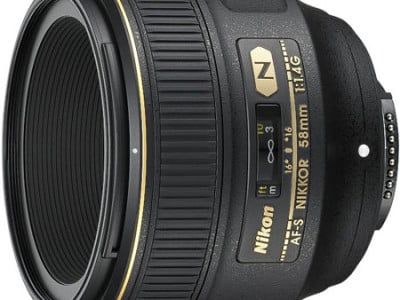