Longitudinal CA (loCA, a.k.a. “axial color” or “bokeh CA”) is an aberration much more difficult to correct in post-processing than lateral CAs. LoCAs show up in magenta coloration/haloing of foreground subjects and greenish hues on background subjects. The following is a 50% crop of a shot taken at 5 m distance that would typically exhibit green halos in the background with less well corrected lenses. The new 400/4.0E VR behaves in an exemplary way in this respect.

These charts show the lens-performance at the largest aperture. Higher values are better and the closer the dotted and the continuous lines of each color are together the less astigmatism (= resolution depends on the orientation of the test-pattern) the lens has. The x-axis displays the distance from the optical axis (=center of the sensor) in mm. I’ll show you the real-life performance at 4 mm (center), 13 mm (DX-corner), and 20 mm (FX-corner) on a D810.

From the chart the new lens should perform on a very high level regarding overall contrast (red line) and sharpness (blue line) across the FX sensor – better than the acclaimed 300/4.0D. The dip of the dotted blue line indicates a little astigmatism when around the DX-corner when you look closely. On paper the new lens looks even better than the venerable Nikon AF-S 300/2.8G VR II. That puts the expectations very high.

But let’s see how this theoretical performance translates into real life results in the sharpness test based on Siemens-stars.

What follows are near-center results (first column) followed by DX-corner results and FX-corner results on a D810. The D810 results from the DX-corner should be a very good approximation for performance on a 16MP DX sensor (like the D7000), because the pixel-pitch of both sensors are the same. But differences in the AA-filter and micro-lens-design of a D810 and a D7000 might yield different end-results.

Processing was done in Lightroom 5.7 from RAW at camera standard settings. Noise-reduction is set to 0, sharpening to 35/0.5/36/10, with no extra tone, color, or saturation-adjustment. White-balance was adjusted to a neutral white and I did some exposure compensation to make the brightness match. CA-removal is ON.

These 100% crops directly from a 36MP D810 sensor show that this lens delivers an impeccable performance right from the start. It delivers a very high contrast and resolves fine details extraordinarily well even at f4 and right into the corners of the FX-sensor. Diffraction is setting in at f11 and distortions are minimal. All crops in a row were taken from the same shot, so there’s no field-curvature to talk about.

This demonstrates, why the 300/4.0D had such a good reputation: Resolution is only a little behind the new 300/4.0E VR. The 300/4.0D also exhibits no relevant field-curvature. And it also shows quite clearly that Nikon’s very good 70-200/2.8G VR II cannot compete here when fitted with a 1.4x teleconverter.

Using a teleconverter magnifies all flaws of a lens. But with the excellent results of the 300/4.0E VR so far I expected an acceptable performance on Nikon’s latest 1.4x teleconverter. That combination results in a 420mm f5.6 lens that still could focus down to 1.4m and get a boost in maximum magnification to 1:3 and even a bit beyond. All lens data are transmitted correctly to the camera. The set-up is the same as before only that I had to move away from the Siemens-star target to 16 m for my test-shots.

Let’s see what the combo produced:

The center is very good even wide open and improves to excellent when stopped down to f8. DX- and FX-corners stay a bit soft throughout the aperture range until diffraction sets in at f16. This time I had to optimize focus separately for the center vs. the DX- and FX-corner. So the combo exhibits some slight field curvature.

The Siemens-star test-targets are shot at a distance of 40x focal length (i.e. at 12 m for a 300 mm lens). But performance of lenses also depends on the shooting distance. Therefore I present another series of test-shots of a landscape dubbed the “Unremarkables” where you can measure distances in km, not meter. Processing was done in Lightroom 5.6 from RAW at Adobe Standard settings. Noise-reduction is set to 0, sharpening to 35/0.5/36/10, with no extra tone, or saturation-adjustment. There’s no tinkering with vignette-control so you see it here as it is produced by the lens. Focus was acquired at the largest aperture manually and not changed for other apertures.

You can click on each image to access the large original. Please respect our copyright and only use those images for personal use.

The main image shows the complete scene at maximum aperture to give you an impression of the angle of view and to judge vignetting. This is followed by two rows of 100% crops for each aperture: The first row show crops for the 300/4.0E VR from the middle, a point at the DX-corner, and from the FX-corner; the second row shows the respective crops from the 300/4.0D for comparison. All shots were made at ISO 64 and VR switched off.

At f5.6 the old 300/4.0D has sharpened up quite nicely and even enjoys a slight advantage over the new lens in the center. Vignetting is now on the same level.

At f8 both lenses are almost indistinguishable.

At f11 the DX-crop of the 300/4.0D suffers although the center and the FX-corner still look good. Could be a turbulence/thermal passing through.

Again: field curvature does not seem to be an issue for both lenses so they’re both good to capture flat and distance scenes.

Same scene but now shot with the 1.4x teleconverter. As I didn’t change my vantage point the scene is now 1.4x larger – and cropped by the same amount. Unfortunately the light changed a bit compared to the last series and without the sun the contrast is lower, naturally.

These results confirm the findings from my tests with the Siemens-stars: even with a teleconverter the lens delivers good image-quality.

Night-shots pose a different challenge for lenses as the contrast is even higher than under bright sun and point-light sources can reveal some weaknesses such as coma, haloing and color-aberrations that do not show up as prominently in other test-shots. The following set of 100% crops from a night-shot show the results from the new 300/4.0E VR in the first row compared to the Nikon 300/4.0D in the second row at f/4.0 shot only a few minutes apart:

In the center and FX-corner crops you can see (again) that the new lens has the advantage of being a bit sharper than its predecessor. The lights in the FX-corner crop also show no big sign of coma. But in the DX-corner crop the strong light-sources reveal that the new lens produces some artifacts around the street-light that the old lens does not show: there is an additional blueish halo overlaid over the lamp’s signature plus there is some moire-like effect. Here we’re seeing first signs of the Fresnel element – more on that later. But it’s worth noting that the yellow lamp to the left of the one in the crop does not show the same effect (see below).

Stopping down makes the effect even more visible as you can see in the following 50% crops:

As Capture NX-D now has a special function to reduce Fresnel flare I tried it out. See for yourself how big the reduction is:

So Capture NX-D cannot work wonders with Fresnel flares as only the f11 shot shows a marked improvement.

But all-in-all the new 300/f4.0E VR is an excellent optical performer near and far even on the critical 36MP sensor of a Nikon D810 under very demanding situations. You can really use this lens wide open and get very good results. There are some side-effects from the Fresnel element but they seem to be limited to only the strongest point-light sources.

This test is for the rendering of point-light sources in an out-of-focus background. The circle of confusion that is produced by this test is pretty indicative of Bokeh performance (in the background) and light fall-off. Ideally the out-of-focus image of the point-light is evenly lit and perfectly circular, with no “onion-rings”, and without coloration. Large aperture lenses normally produce an effect known as “cat’s eye” the further away from the optical axis the point-light is projected. This is due to optical vignetting in the lens barrel when light enters the lens from an angle. For an explanation of this effect have a look over at toothwalker.org. The following set of 25% crops from a night-shot show the results from the 300/4.0E VR in the first row compared to the Nikon 85/1.4G in the second row.

The Nikon 300/4.0E VR produces a large circle of confusion. It exhibits a very even light-distribution across the circle with a little outline. The outlining is of the same color as the main body of the Bokeh ball which again is due to the negligible loCA of this lens. The lens shows some obvious cat’s-eye effect towards the borders/corners of the sensor but there is no clipping from the mirror-box. For real-live Bokeh performance head over to the next page.

Catching a strong light-source like the sun shining directly into the lens can not always be avoided. That could produce strange colorful ghosts-images or reduce contrast considerably through flare and glare.

The appearance of flare and ghosting depends on factors like the aperture and the angle of the light hitting the lens. So to judge the proclivity of a lens for these artifacts I go through a series of well calculated shots against a strong light source to provoke glare and ghosting. All tests are done with the lens-hood mounted.

The image shows one of the worst results from a series of 25 shots that I could produce with this lens. The old 300/4.0D renders the same situation without the streaks but with an even lower contrast (see here). So you should avoid a strong light-source shining just from beyond the corners into the lens. Or stop down: At f11 the 300/4.0E VR has cleaned up quite nicely, while the 300/4.0D still suffers from low contrast.

Here’s another shot straight into the light with both lenses at 1/100 sec (slightly cropped).

Some wild colorful artifacts occur with the new lens and the black-level is around 1%. The old 300/4.0D renders this situation much better and the black-levels at the corner are around 0.1%. But it also shows its share of ring-shaped pattern in the halo surrounding the light-source.

Now let’s check out some Nikon 300mm f4.0E VR sample images (with more comparisons), or if you’ve seen enough, head over to my verdict. 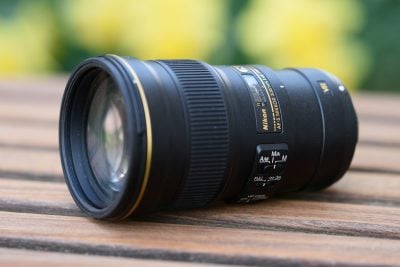 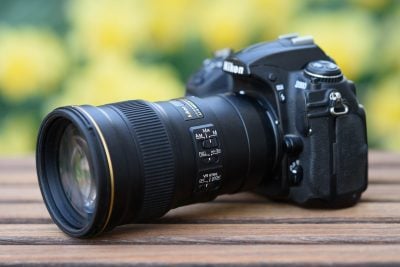