The Nikon 28/1.8G is a good lens but it's not cheap. Indeed the price is perhaps the biggest disappointment for potential buyers of this lens. The performance is pretty good but you need to stop down to f4.0 or even f5.6 for the sharpest results across the frame, and if your sample is like mine you'll also need to correct for a focus-shift as the aperture is closed to get flawless performance. Overall it is a worthy addition to the current offering of short primes, but its flaws prevent our top award; I can however still award it a Recommended rating.

Check prices on the Nikon AF-S 28mm f1.8G at Amazon, B&H, Adorama, or Park Cameras. Alternatively get yourself a copy of my In Camera book or treat me to a coffee! Thanks!

The Nikkor AF-S 28mm f/1.8G is a wide angle lens designed for Nikon’s range of DX and full-frame FX-format DSLRs. Announced April 2012, it’s the larger aperture sibling to the venerable Nikkor AF 28mm f2.8D from 1994. It can also be considered a cheaper alternative to the AF-S 24mm f/1.4G and AF-S 35mm f/1.4G (see my Nikon 35mm f1.4G review for the performance of this high-end model).

With a line-up of three not too expensive f1.8 primes at 28mm, 50mm, and 85mm, Nikon seems to have completed the renovation of a set of FX-capable lenses that are considered the primary goal for people wanting large aperture primes at a reasonable price.

The 28mm focal length sits nicely in-between 24mm and 35mm as you can see in the following image where I’ve inserted the frames for the respective focal lengths. Thus an 28mm lens might be considered a more attractive complement to a 50mm prime than both the slightly wider and longer alternatives. 28mm offers a clearly wider angle of view: it captures around 56% more area of any given scene than a 35mm lens. Which also might be considered too close to the framing of a 50mm lens to be of interest to owners of the latter. But conversely a focal length of 28mm on an FX-body is not as “extreme” as a 24mm. Distortions at the borders of the frame are less pronounced and thus more acceptable. Meanwhile on a DX-body a 28mm lens is equivalent to 42mm and considered close to the ideal focal length that matches the diagonal of the sensor and thus produces “normal” looking images.

Interestingly Nikon has so far chosen not to produce an AF-S 24mm f/1.8G or an AF-S 35mm f/1.8G for the FX full-frame format (although of course there is the popular DX 35mm f/1.8G lens for cropped bodies). That may have to do with economical reasons, but Nikon might have fared better had it given its DX 35/1.8G a proper FX image circle and complemented it with a 24/1.8G, because a 28mm prime might just be too long for some and too short for others. But again, such a move might have brought the risk of jeopardizing sales of its 24/1.4G and 35/1.4G lenses.

So far Nikon’s new f1.8 designs (the 50/1.8G and the 85/1.8G) have proven to be sharp and contrasty rendering neutral colors (see my Nikon 50mm f1.8G review and Nikon 85mm f1.8G review). This puts pretty high expectations on the newcomer. In this review I’ll have a look at Nikon’s newest 28mm f1.8G prime, and find out whether the lens lives up to the expectations. 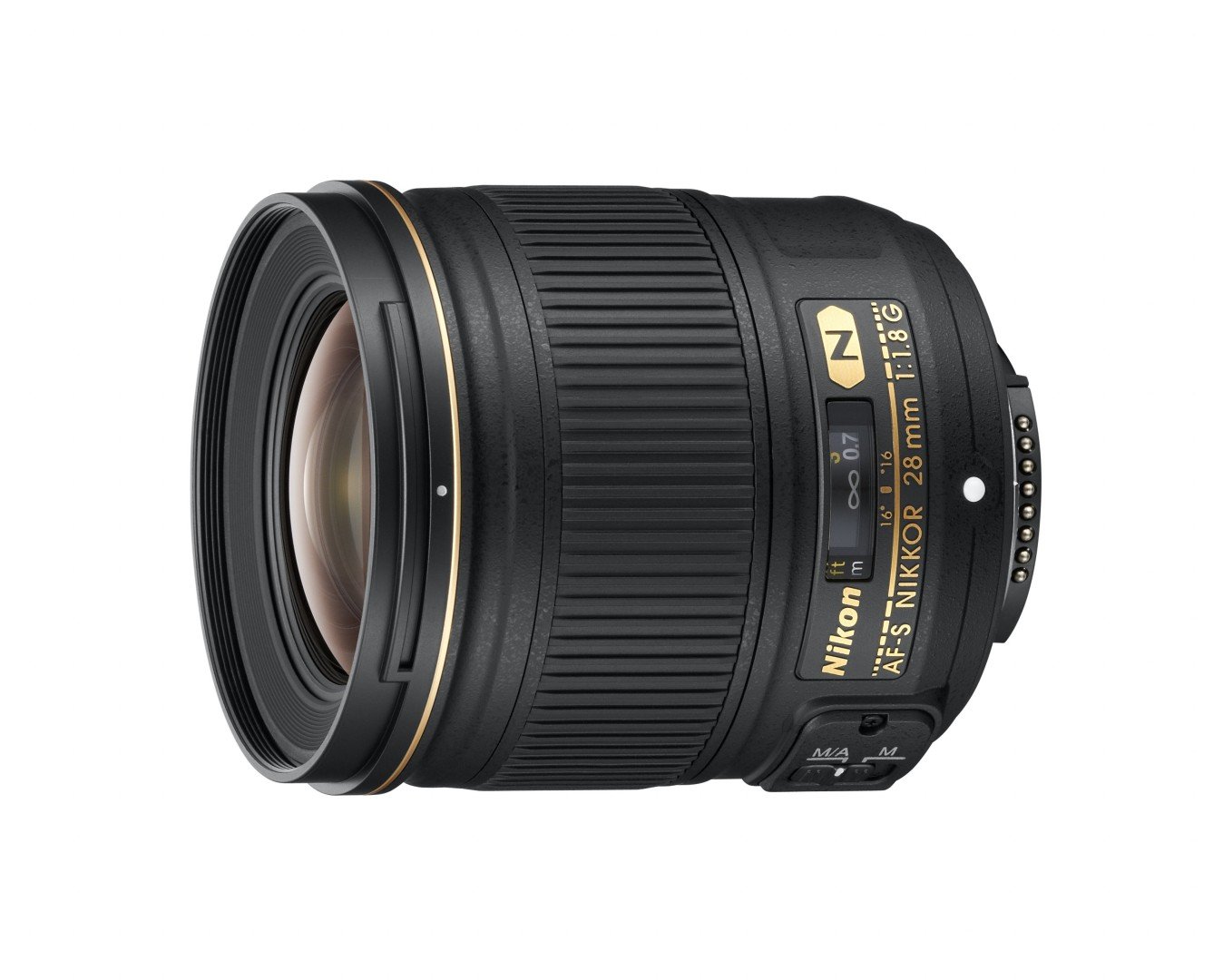 Optics: 11 elements in 9 groups. More than the 28/2.8D with 6 lenses in 6 groups but still only a small amount of glass compared to zooms that tend to have something like 21/16. That bodes well for contrast and flare-resistance. Plus Nikon used Nano-coating on this lens and the cross-section does show two aspherical elements. [+]

Filter-thread: 67mm = a cheaper standard than with the larger pro-lenses [+]

Comes with a flexible lens pouch, lens-shade is included and revertible for transport, and the lens-caps are standard Nikon’s. [0]

Distance information is relayed to the camera, so the Nikon body can do all the advanced exposure-related stuff with this lens. But this is true for most alternatives too. [+]

A 28mm lens may be a favorite for landscape shooters but they need corner-to-corner sharpness more than an f1.8 aperture. But the large aperture makes this lens also fit for fast street-/PJ-style shooting with an immersive in-the-middle-of-things perspective. A large aperture is also always good for isolating your subject from the background. But at 28mm focal length you have to be close to enjoy this effect.