Nikon is treading on dangerous ground here with what accounts to little more than a minor update in an increasingly aggressive market which embraces innovation. A great deal has changed in the two and a half years since the D800 / D800e and while those models proved there was still a market hungry for a high-end DSLR, companies like Sony, Fujifilm, Olympus and Panasonic have significantly raised the bar since then with products that are much more innovative and to me ultimately more compelling.

The Nikon D810 is a full-frame DSLR with 36 Megapixels. Announced in June 2014, it jointly replaces the almost two and a half year old D800 and D800e, slotting between the D610 and the flagship D4s. Like the models it replaces, the D810 is aimed at pros and high-end enthusiasts who demand the best image quality.

The D810 features a full-frame FX-format sensor with the same 36.3 Megapixel resolution as its predecessors. Nikon describes it as a brand new sensor, and like its other recent DSLRs, there’s no optical low pass filter. Unlike the earlier D800e, there are no OLPF elements in the path, which allows Nikon to claim even greater detail and what it describes as its best image quality yet. The native sensitivity is 64-12800 ISO, extendable to 32-51200 ISO, and there’s a new (uncompressed 12 bit) sRAW option which records a quarter of the pixels for half the file size.

The new sensor is coupled with the latest EXPEED 4 image processer, inherited from the D4s. This boasts lower noise and more accurate white balance, as well as supporting 1080p video at 50p / 60p and slightly faster continuous shooting rates up to 5fps in FX or 7fps in DX. Also inherited from the D4s is a 51-point AF system which supports zonable areas. There’s a new clarity picture adjustment and a flat rendering option for stills or video destined for post production. A new highlight-weighted metering option will please anyone shooting spot-lighted shows. The screen remains a fixed 3.2in panel with VGA resolution, but now with 1229k dots in an RGBW alignment and the option of a split-screen view showing magnified previews of two separate areas of the composition. Finally vibrations have been reduced with a new shutter block and an optional electronic front curtain during mirror-lockup. I attended an exclusive Nikon press briefing and my first impressions are below. 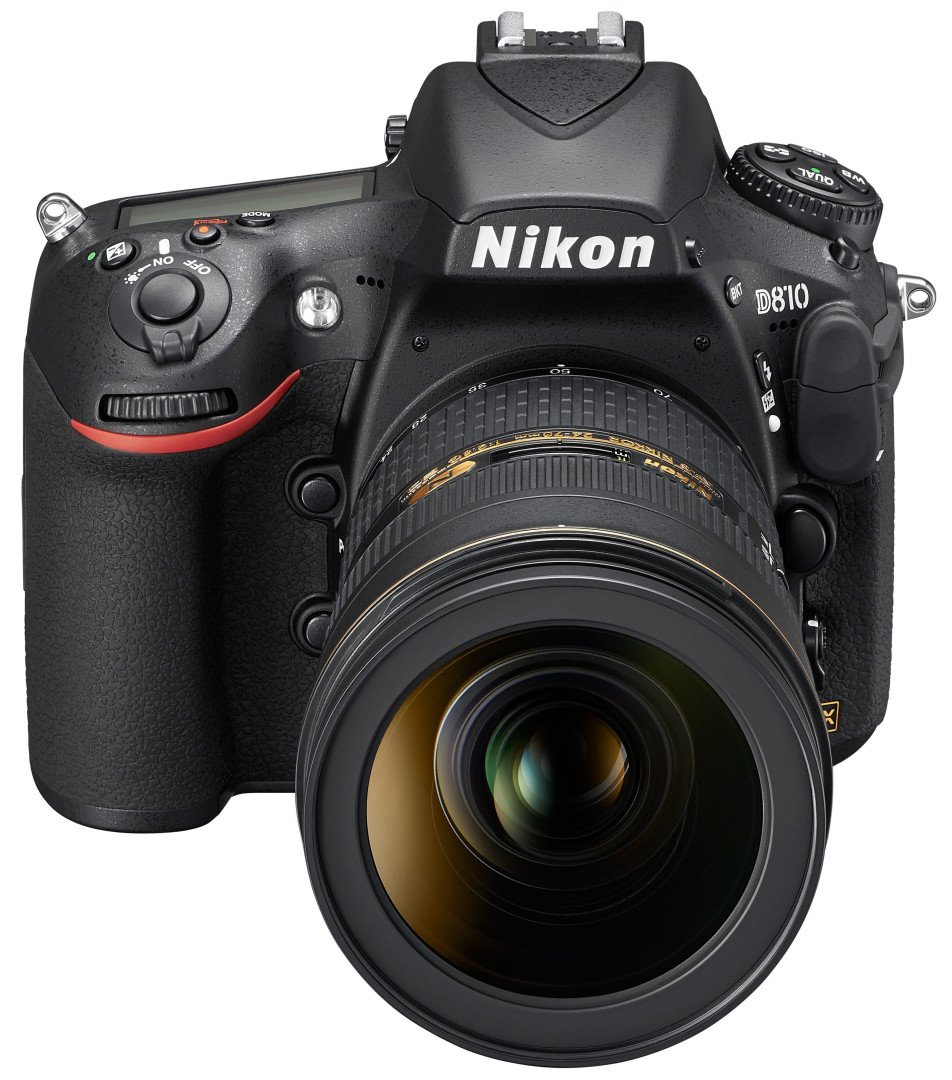 During an exclusive Nikon press briefing, I got to try out the D810 in person and quiz Nikon about their latest camera. At first glance there’s certainly a lot in common between the new D810 and the D800 and D800e which it replaces. The sensor shares the same size and resolution, although there are now absolutely no optical low pass filter elements to get in the way. The body is essentially the same, bar an improved grip, a button swap and a new rubbery memory card slot (which still houses slots for CF and SD). The viewfinder remains the same size and coverage and home to the same 51 point AF arrangement, albeit the latest module from the D4s with zoneable areas. The screen’s also the same size and resolution, although now with an RGBW panel for brighter reproduction. The continuous shooting is now quicker, but not by a massive degree, gaining 1fps in FX mode and 2fps in DX mode.

So a number of small upgrades, but what’s completely new? Well Nikon is making a lot of noise over the improved image quality, although for that we’ll have to wait and see the output from final production samples. It is however interesting to note the native sensitivity now works down to 64 ISO (extendable to 32 ISO) which will be welcomed by long exposure fanatics.

Certainly the EXPEED 4 image processor is new to this series, and this in turn allows the D810 to support the slightly faster continuous shooting speeds and record 1080p video at 50p and 60p. It also allows the new sRAW file size, clarity picture control, flat profile option, zebra patterns, improved NR and white balance. Indeed it’s the combination of EXPEED 4 and the new sensor which allows Nikon to claim the D810 delivers its best image quality to date, but again we’ll have to wait and see. Note the sRAW option only records images in 12 bit with uncompressed data, so no 14 bit or losslessly compressed options, but they’re still half the size of full RAW files which will please those who don’t always need the maximum resolution.

The screen panel is new, with an RGBW alignment, and the split display option is very neat, letting you keep an eye on two different parts of a composition at high magnification – I know I’d find that very useful.

Also new is the shutter block, built to reduce vibrations and now also offering the additional help of an optional electronic first curtain shutter during mirror lockup. This improvement is not to be underestimated, as anyone who shoots from a tripod with mirror lockup can attest – anything to minimize vibration on a high resolution body is very welcome.

But that’s about it. There’s unforgiveably still no Wifi built-into the camera, with Nikon still insisting you buy and mount an expensive and inconvenient accessory. I complained about this and was told the absence of Wifi was driven by the large file sizes, but that hasn’t stopped Sony and lest we forget you can also use Wifi to remote control a camera and tag GPS data, two things which are common in the mirrorless World.

The 1080p video may now have double the frame rates of the D800 / D800e, but that remains very last year, or even the year before that. In 2014 I think most videographers would expect 1080p at higher frame rates than 50 / 60p from a camera in this price bracket, or the presence of 4k. And while there may now be zebra patterns, there’s no focus peaking.

The screen may now have a new panel, but the resolution and size remain the same as before, and as you’d expect it remains resolutely fixed in position. No tilting or articulation here and unsurprisingly no touch controls either. And while some Nikon owners may still have a collection of CF cards, I’d have personally preferred to have dual SD slots instead.

While Nikon’s traditional fan base may not be bothered by the lack of wireless, 4k video, 1080p at high frame rates, focus peaking or an articulated touch-screen, I think it makes the D810 look old fashioned before it’s even out the gates. And if it looks dated now, how’s it going to look in two or more years during the typical lifespan of this product? Remember this is not a cheap camera and even now you can buy a Sony A7r with the same sensor size and resolution, Wifi, focus peaking and a tilting screen for two thirds the price; the rumoourmill is also grinding that the D810 sensor is the same as that in the A7r, although I know I’ll never be able to confirm this with the companies.

Of course owning a D800 / D800e was all about packing the ultimate image quality into a relatively portable form factor, and while Sony’s A7r matched their output last year in a smaller, lighter and cheaper body, it can be tricky to eliminate all vibrations from it. So if the D810 can greatly reduce vibration issues while also improving even a little bit on the image quality of its predecessor, then there’ll certainly be some high-end photographers who’ll bite. I can see it being particularly tempting to long exposure fanatics with the reduced vibrations and low native ISO.

But personally speaking I feel it could have been so much better had it embraced new technologies which have already become commonplace on several generations of mirrorless rivals. Nikon is treading on dangerous ground here with what accounts to little more than a minor update in an increasingly aggressive market which embraces innovation. A great deal has changed in the two and a half years since the D800 / D800e and while those models proved there was still a market hungry for a high-end DSLR, companies like Sony, Fujifilm, Olympus and Panasonic have significantly raised the bar since then with products that are much more innovative and to me ultimately more compelling. I hear from many Nikon (and Canon) owners who’ve become disillusioned with their DSLRs and switched to mirrorless, especially to the Sony A7r and Fujifilm XT1. If it’s to retain existing customers or grow, Nikon has to look beyond its conservative base and see what’s happening – and what’s expected – in the wider photography World.