To compare real-life performance I shot this scene with the the Nikon COOLPIX S9700 and the Canon PowerShot SX700 HS within a few moments of each other using their best quality JPEG settings.

The image above was taken with the COOLPIX S9700. The camera was set to Aperture priority mode with the sensitivity set to 125 ISO and the aperture to f4, which produced the best quality results, the COOLPIX S9700 metered an exposure of 1/1000. At its base 100 ISO sensitivity setting the Canon PowerShot SX700 HS metered 1/800 at f4. As usual the crops are taken from the areas marked in red above.

The COOLPIX S9700 doesn’t get off to a great start with a crop from close to the edge of the frame that’s far from sharp. but things improve considerably moving closer to the centre. The second crops shows much cleaner edges and more detail. You can’t make out the time on the church clock, but there’s plenty of detail in the church tower and the surrounding scenery. In the third crop the lighthouse isn’t as crisply defined as it might be, the crop from the PowerShot SX700 HS alongside shows a more distinct white column with cleaner edges.

The final crop from close to the right edge of the frame looks very similar to the first one with poor edge definition and blurring of the finer detail. It’s not just the lighthouse crop where the Canon PowerShot SX700 HS gets the better of the COOLPIX S9700. The SX700 HS performs better across the board with sharper crops that show more detail than those from the COOLPIX S9700. The difference is less apparent in the centre where the COOLPIX S9700’s lens does a better job. The usual caveat applies – you’re only likely to notice these differences at or close to 100 percent viewing sizes, but the fact remains, the PowerShot SX700 HS outshines the COOLPIX S9700 image quality – at this wide angle focal length at least. 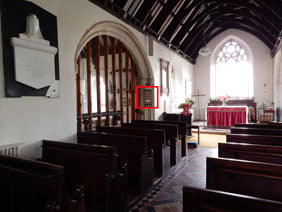 To compare noise levels under real-life conditions , I shot this scene with the Nikon COOLPIX S9700 and the Canon PowerShot SX700 HS within a few moments of each other using their best quality JPEG settings at each of their ISO sensitivity settings.

Both cameras were set to Aperture priority mode and f4 was selected as I’d previously determined this produced the best results.

The above shot was taken with the Nikon COOLPIX S9700 in Aperture priority mode. For these tests both cameras were placed on a tripod and stabilisation was disabled. The cameras were otherwise left on their default settings. With the sensitivity set to its base 125 ISO the S9700 selected an exposure of 1.3s at f4. The Canon PowerShot SX700 HS, set to it’s base 100 ISO sensitivity also metered an exposure of 1.3s at f4.

These noise crops from the COOLPIX S9700 look quite promising. The 125 ISO crop isn’t noise-free, and there’s a slight clumpiness that we saw on the outdoor crops which looks like the work of noise processing. That said, the result isn’t unpleasant and there’s a good level of detail. The 200 ISO crop is a tiny bit softer and in the 400 ISO crop you can see the effect of the noise processing on the text, but all these lower ISO settings produce results good enough for printing at large sizes.

It’s not until you get to 800 ISO that the image detail starts to be seriously affected by the noise levels and associated processing. Even here, at smaller sizes things look pretty good. From 1600 ISO up the noise does gain the upper hand though, and at the two highest settings – 3200 and 6400 ISO there’s arguably more noise than actual image data. But these are still worthwhile settings to have as they produce perfectly acceptable looking images at much smaller sizes.