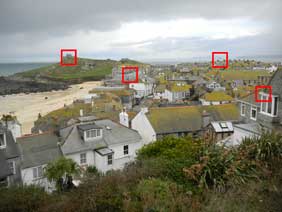 The above shot was taken with the the Nikon COOLPIX S80 in Auto mode with the lens at its widest angle setting of 6.3mm (35mm equivalent). The sensitivity was set to 80 ISO and the exposure was 0.8 of a second at f3.6. The crops are taken from the area marked with the red square and presented below at 100%.

The Crops from the Nikon COOLPIX S80 in terms of noise are quite encouraging, though there are some other issues. Let’s start on a positive note though – the COOLPIX S80 was the only one of the three cameras in this comparison to reproduce good tonal detail in the shadow areas of the scene from which we take our crops. This isn’t an exposure issue, all three cameras set a very similar exposure, in fact the Lumix exposure was greater by almost a stop, yet neither the Lumix FX700 nor the Cyber-shot TX9 (both of which have CMOS sensors) have recorded much, if any, of the shadow detail.

The first crop from the COOLPIX S80, taken at 80 ISO shows good overall detail with no evidence of noise that we can see, though, in the wood panelling you can make out the same slight granularity that was in evidence in the outdoor crops. It’s often quite difficult to spot any difference between 80 and 100 ISO settings, but this isn’t the case here and the 100 ISO crop is softer with less detail , most noticeably in the stone column, than in the 80 ISO one. Given the small advantage that moving up to 100 ISO will provide, we’d recommend S80 owners to stick with the lowest 80 ISO setting whenever possible.

There’s a similar small quality degradation between 100 and 200 ISO, but all three lower ISO settings produce good results that you’d be hard pressed to tell apart unless you were comparing them at 100%. At 400 ISO, as you’d expect, there’s a further significant downward step, with a lot of the finer detail disappearing along with whatever noise has been supressed. Nonetheless, at the 400 ISO sensitivity, the COOLPIX S80 still produces highly usable images. At 80 ISO we’re well into high ISO noise territory, or at least the loss of detail and image break up that result with its aggressive suppression. The detail in these crops and those at the higher 1600, 3200 and 6400 settings is still holding together though, and isn’t as badly broken up as as some we’ve seen.

Like the Cyber-shot TX9 the Lumix FX700 has failed to retain tonal detail in the shadows, despite selecting a very similar exposure to the the other two cameras. The Lumix FX700 results are also quite cold in terms of colour balance. Right from the off at 100 ISO the Lumix FX700 crops are lacking in detail and look very processed and for that reason we’d put the Lumix FZ700 in third place behind the Nikon COOLPIX S80 and sony Cyber-shot TX9.

Now head over to our Nikon COOLPIX S80 gallery to see some more real-life shots in a variety of conditions.