It would be nice if you could have your pick of features on an affordable super-zoom, but as in all things, you generally get what you pay for. When you’re on a budget, though, what you get can differ widely and the balance of features becomes more important than ever.

With the COOLPIX P530, I think Nikon has got the balance just about right. Sure, it’s disappointing to have to wave goodbye to the earlier model’s built-in GPS and flip out screen, but the COOLPIX P530 has plenty of other things to recoomend it.

Dropping the sensor resolution to 16 Megapixels is a mature move that results in better image quality and lower noise levels. The 43x zoom is big and bright enough for 99 percent of situations and results in a compact body that doesn’t resemble a DSLR, at least in terms of size and weight. The 3 inch fixed screen is slightly smaller than its predecessor and doesn’t flip out, but it’s a higher quality panel that can be viewed from very acute angles. In all these cases what appears to be less is actually more, look beyond the numbers and the COOLPIX P530 adds up to much more than the sum of its specifications. The electronic viewfinder looks bigger and brighter than the specs would suggest. Added to which there’s a wealth of respectable and versatile continuous shooting modes, a wide range of video modes including high speed optons and excellent handling along with the ability to customise. 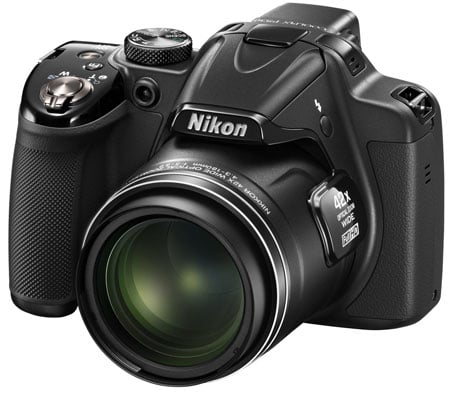 In many ways the Nikon COOLPIX P530 is a much closer match for the Canon SX520 HS than the Sony H400. For one thing, they look similar. Styling differences aside they’re roughtly the same size and weight (the COOLPIX P530 is a little bigger and heavier). They share a roughly equivalent 42x zoom range and both are fitted with a 16 Megapixel CMOS sensor. The COOLPIX P530’s lens is a little brighter at the wide angle end of the range at f3 compared with f3.4 on the SX520 HS.

The one obvious external difference is the COOLPIX P530’s built-in electronic viewfinder. Like the one on the Sony H400, it’s not exactly cutting edge, but it’s perfectly adequate and makes a big difference to your ability to frame shots when zoomed in and when working outdoors in bright sunlight. In terms of their screens the two models are pretty evenly matched, both sporting 3 inch panels and, though the COOLPIX P530’s screen resolution is higher, in practice the SX520 HS’s screen produced a more easily viewable image – just as well as there’s no viewfinder to fall back on.

The COOLPIX P530 is better equipped for shooting movies with a much wider range of modes than the SX520 HS. Its best quality 1080p30 mode matches the SX520 HS, but it also offers 1080i60, 720p30, iFrame modes and three high speed (slomo) shooting modes. You also get to choose between PAL and NTSC frame rates. Sadly, the SX520 HS no longer features the Super Slow Motion modes of its predecessor the SX520 HS. The COOLPIX P530 also provides fast continuous shooting at up to 7fps, a raft of faster reduced resolution modes as well as a built-in interval timer. By comparison the SX520 HS offers a full resolution continuous mode at 1.6fps and a 4 Megapixel 10fps burst mode.

Once prices settle, I’d expect the COOLPIX P530 and PowerShot SX520 HS to be similarly priced, as always it pays to shop around.

Like the Canon SX520 HS, the Nikon P530 is lighter and more compact that the H400, but can’t match it for zoom range. The P530’s lens extends to an equivalent 1000mm at the telephoto end compared to 1550m on the H400. If you want to know how much of a difference that is in practice, take a look at the comparison on the first page of this review. One thing the P530 has on its side is a slightly brighter maximum aperture – f3-5.9 compared with f3.4-6.5 on the H400. It’s a small difference, though and the final figure is at the H400’s much longer 1550mm focal length.

I mentioned sensor differences in my SX520 HS comparison above and the same applies to the COOLPIX P530. The Sony H400 has a 20 Megapixel sensor compared with 16 Megapixels on the COOLPIX P530. Despite that, the image quality is similar, though the H400 is noisier at higher ISO sensitivities.

Both models have built-in electronic viewfinders and the specifications, 0.2 inch 201k panels, are more or less identical, but the COOLPIX P530’s EVF is significantly larger and a little brighter. It’s also not prone to the colour cast and streaking that affects the H400’s EVF. The P530’s 921k dot LCD screen is also higher resolution than the 460k dot panel on the H400 and provides a clearer, more detailed view.

Like the H400, the COOLPIX P530 supports the full range of PASM modes and also has a fully auto mode with scene detection provided in Scene Auto select mode. The P530 also has a second control dial, so for changing exposure settings in PASM modes it provides superior handling to the H400. If you like to customize controls, the COOLPIX P530 offers a programmable function button as well as a user settings position on the mode dial versus nothing on the H400. Both models have a panorama mode and both produce great results easily the H400 at slightly higher resolution. Both models have identical 3-frame auto exposure braketing, but the COOLPIX P530 goes one better with a Backlighting scene mode to produce composite HDR images. The P530 has a more extensive set of effects filters which, as on the H400, can be used when recording movies.

The COOLPIX P530 is a more capable video camera than the H400 with a 1080p full HD mode compared with only 720p on the H400. It also offers 1080i60/50, 720p30/25, iFrame modes and three high speed (slomo) shooting modes and you get to choose between PAL and NTSC frame rates. Aside from the 720p option in two quality settings, the only other mode available on the H400 is VGA. One advantage the H400 does have over the P530 is a movie position on the mode dial which allows you to accurately frame up your shot on the screen or in the viewfinder prior to recording. The COOLPIX P530 also provides fast continuous shooting at up to 7fps, a raft of faster reduced resolution modes as well as a built-in interval timer. By comparison the H400 offers only one continuous mode at paltry 0.7fps .

The COOLPIX P530 is a litle more expensive than the H400, but aside from the zoom range, it’s a better camera in almost every respect. The H400’s sensor may be higher resolution, but the two are equally matched for image quality and the P530 performs better at higher ISO sensitivity settings. It has a better screen and viewfinder, superior movie recording, faster and more versatile continuous shooting, better customisation and overall its handling is superior. So maybe it’s worth that little extra.

The COOLPIX P530 remains an excellent choice for photographers looking for long reach combined with a good balance of other features and excellent handling. For the price, it provides a wide range of features, complementing the 42x zoom with a great screen and serviceable EVF. It’s a capable movie camera and as well as decent continous shooting modes provides auto exposure bracketing, a basic interval timer and a range of stacking modes including HDR.

It has a couple of niggling faults though. The menu system can be unresponsive – there’s a slight lag between pressing navigation buttons and the menu responding which is a little irritating. And it suffers from the age old Nikon COOLPIX problem of video lag – there’s an interminable delay between pressing the movie record button and recording actually starting. But those are small faults which won’t stand in the way of a Cameralabs Recommended award. The COOLPIX P530 is a thoroughly enjoyable super-zoom to use that produces great results.