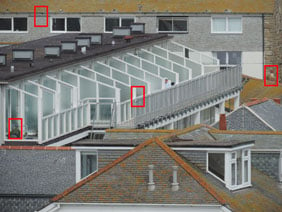 For this next test I zoomed all three cameras in to an equivalent focal length of around 600mm. With the exposure mode in Aperture priority, each camera was set to the widest available aperture. As usual, the crops are taken from the areas marked by the red rectangles.

As before, the area and size of the detail in these crops varies because of the different sensor resolutions with the 18 Megapixel Nikon COOLPIX P520 showing the smallest area with the largest detail, followed by the 16 Megapixel Lumix FZ70 / FZ72, then the 12 Megapixel PowerShot SX50 HS.

The first crop from the COOLPIX P520 shows about the same level of detail as the wide angle crop, but generally, these crops look slightly better and more consistent than those shot at the 24mm focal length. There’s still a degree of distortion in the third crop from the frame edge, though, and the image detail is much softer here.

There’s less difference between the Lumix FZ70 / FZ72 crops and those from the COOLPIX P520 and PowerShot SX50 HS in the middle of the zoom range. In the first crop, the FZ70 / FZ72 comes off worst, with both the other models producing a more detailed image, but there’s very little to chose between the three of them in the second and third crops (the PowerShot SX50 HS does slightly better in the second crop, but worse in the third). In the final crop all three would be evenly matched, but the Lumix FZ70 / FZ72 is let down by a clumpiness that covers the crop but is most visible in the top half. 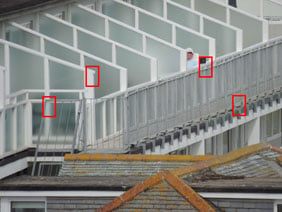 For this final test I zoomed all three cameras in to their maximum focal length – 1000mm on the COOLPIX P520, and 1200m on the Lumix FZ70 / FZ72 and PowerShot SX50 HS. Again, the exposure was left in Aperture priority mode and set to the widest available aperture – f5.9 on the COOLPIX P520 and Lumix FZ70 / FZ72 and f6.5 on the SX50 HS. As usual, the crops are taken from the areas marked by the red rectangles.

These crops appear in order from left to right across the frame, so the first and last are from the frame edges with the middle two closer to the centre. Once again, this is a better performance from the COOLPIX P520 than at its wide angle setting, so, as far as the lens is concerned at least, you’ll get the best results when its zoomed in.

Though it turns in a very good result from the first crop, the crops from the Lumix FZ70 / FZ72 are all slightly marred by a clumpy pixellation which was much less apparent at the wider focal lengths. But despite the minor quality differences between the COOLPIX P520 and the Lumix FZ70 / FZ72 at each of the three zoom settings, on balance It appears there’s little to chose between them in terms of quality. It’s much easier to spot the gap between these two and the Canon PowerShot SX50 HS which outclasses them both, managing to achieve consistently good results with sharp edges and a high level of detail right across the zoom range.