Nikon’s Z 50mm f1.2 S is a big step-up over their existing 50/58mm DSLR lenses – literally: It is excessively big and quite heavy but for that it offers a bright f1.2 focal ratio, very good optics with a good Bokeh, and has all of the features of Nikon’s best Z-Nikkors – except for fluorine coating. Plus, the marginal focus breathing should please videographers. Optically it may not be better than Nikon’s very good Z 50mm f1.8 S which can be had for a quarter of the price, but if you need the one stop brighter focal ratio the Nikon Z 50mm f1.2 S comes Highly Recommended!

Check prices on the Nikon Z 50mm f1.2 S at B&H, Adorama, WEX or Calumet.de. Alternatively get yourself a copy of my In Camera book or treat me to a coffee! Thanks!

The Nikon Z 50mm f1.2 S becomes the third standard prime lens for Nikon’s full-frame Z-series mirrorless cameras. A popular focal length for street photography and general-purpose use, it features a bright f1.2 focal ratio gathering two times the light of its smaller sibling the Z 50mm f1.8 S, although still half a stop slower than the famed Z 58mm f0.95 Noct.  On a cropped body like the Z50 the new lens is equivalent in angle-of-view and depth-of-field to a 75mm f1.7 lens. This is quite attractive for portrait photography and gives good background isolation and blur even on the smaller format sensor.

Physically, the Z 50mm f1.2 S is much larger and heavier than the Z 50mm f1.8 S. Without lens hood it’s as long as the Z Noct but with a more accommodating girth. The biggest benefits of the new Z 50mm f1.2 S over the Z Noct are: It is much lighter (1090g vs. 1997g), offers autofocus and costs a quarter of the Z Noct. What the new Z-Nikkor has in common with the Z Noct: an additional function button which can be assigned different functions, plus the OLED display to indicate aperture or focusing distance and depth-of-field.

Optics: The Nikon Z 50mm f1.2 S is a pretty complex design with 17 elements in 15 groups including 2 special dispersion elements and 3 aspherical elements. This is similar to the Z Noct (17 elements in 10 groups) but much more complex than the Z 50mm f1.8 S (12 elements in 9 groups). 30 glass/air surfaces create a lot of opportunities where reflections can cause problems. To counter this the Z 50mm f1.2 S employs the new “ARNEO” anti-reflective coating (just like the Z Noct) in addition to Nikon’s Nano-coating to reduce flare, glare and ghosting. But it misses the fluorine-coating the Z Noct (and many Z zoom lenses) has on the front element to repel water, dust, and dirt and make cleaning easier. [+]

Image stabilization: The lens offers no optical stabilization – like every Z-Nikkor prime lens so far. But the Nikon Z full-frame bodies provide built-in sensor-shift stabilization for Z-mount lenses over 5 axis – plus an optional electronic stabilization in video mode. [0]

Auto focus: Yes with built-in AF drive, just like the Z 50mm f1.8 S. Manual-focus override is by simply turning the dedicated focus ring. The focus ring has a mildly variable gearing covering the focus range in 60 degrees when turned (not too) fast and about 180 degrees when turned slowly. This – together with the limited AF-speed in Movie Mode – makes smooth focus pulling easier than with the Z 50mm f1.8 S wich has a much more variable gearing. The Z Noct is manual focus only. The Z 50mm f1.2 S like the Z Noct also has an extra button on the lens which can be assigned many different functions e.g. AF-lock. [+]

Display: The Nikon Z 50mm f1.2 S features the same OLED display as the Z Noct indicating aperture or focusing distance (in m or ft.) and depth-of-field. This display is hard to read under sunny conditions in its default setting but it can be made as bright as the top display on the Z7. You can switch through the different display types using the DISP-button. The Z 50mm f1.8 S has no such display. [+]

Lens profile: The new Z-Nikkor comes with a lens profile which can be controlled from the camera. Vignette control offers the usual options of High, Normal, Low and Off. Diffraction compensation and Auto distortion control can be activated or deactivated. That’s the same as with the Z Noct or Z 50mm f1.8 S. [+]

The lens comes with a pouch that’s just as flimsy as the pouch of the other Z lenses (except for the Z Noct) and has no strings to pull it close. So if you put the lens in your bag it might easily slip out of its pouch and bang around unprotected. This is simply unacceptable for a lens costing north of 2000 EUR/USD. The lens hood is included and locks in place to avoid accidentally falling off plus it is reversible for transport. [0]

Aperture ring: Like the Z Noct the Z 50mm f1.2 S has a slim multi-function control ring at the back of the lens in addition to the dedicated focus ring. The control ring can be assigned to operate the aperture (which is the default), exposure compensation, or ISO sensitivity – or simply switched off. The Z 50mm f1.8 S has no dedicated focus ring but its broad function ring automatically falls back to focusing when the lens is switched to MF. [+]

Sealing: yes, a rubber grommet at the lens-mount plus further special weather-sealing throughout the construction, just like the Z Noct and Z 50mm f1.8 S. [+]

The score in the “features-department” is 1[-]/6[0]/7[+]. The new Nikon Z 50mm f1.2 S is extremely long and quite heavy and comes with a not insubstantial asking price. For that it offers a nifty feature set and a very bright focal ratio of f1.2 which gathers a bit over one stop more light than the Z 50mm f1.8 S.

The market for large aperture standard prime lenses is pretty crowded but if you want autofocus and Z-mount there is only Nikon’s Z 50mm f1.8 S as an alternative. But shooters of Nikon Z cameras could also use F-mount lenses on Nikon’s FTZ adapter – adding another 31mm in length and 133g in weight:

Focus accuracy and repeatability is critical to consistently produce sharp shots. Repeatability (the accuracy of focus on the same subject after repeated focus-acquisition) of this lens is good but not great (measured 97.6% in Reikan FoCal) with no outliers over a series of 40 shots. There is a bit of focus variation whether the lens focuses from a closer distance or from infinity but I didn’t encounter hunting under the well lit test-conditions. The lens focuses in around 0.6 sec from infinity to 0.64m (1:10 magnification), a bit slower than the Z 50mm f1.8 S at 0.5 sec.

The focus ring is 49mm wide. Its surface is rubberized, turns very smoothly and can easily be operated with one finger. AF-operation of the lens is audible from the outside but not enough to disturb your seatmate in a theater. If you record video with the built-in microphone the AF-drive produces a whirring noise when you force the lens to focus fast e. g. by using the AF-ON button or manual focusing. If you use Full-time AF the camera reduces focus speed to a level where it emits no sound – unless the lens is hunting. This is clearly the loudest Z-Nikkor so far. If you use the control ring on the lens to change the aperture this works smoothly and without noise in video mode.

As you pull focus, you’ll hardly notice any focus breathing: When I adjusted the focus from infinity to 0.64m on the Nikon Z 50mm f1.2 S I measured a 1.5% increase in magnification. This is totally inconspicuous and should please videographers. The Z 50mm f1.8 S breathes -1%, the Z Noct a hefty +16%.

Check prices on the Nikon Z 50mm f1.2 S at B&H, Adorama, WEX or Calumet.de. Alternatively get yourself a copy of my In Camera book or treat me to a coffee! Thanks!
Pages: 1 2 3 4 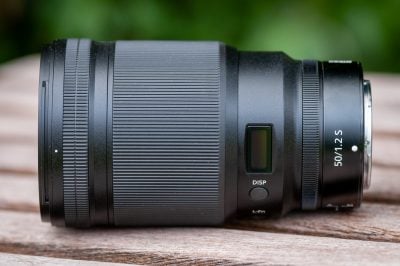 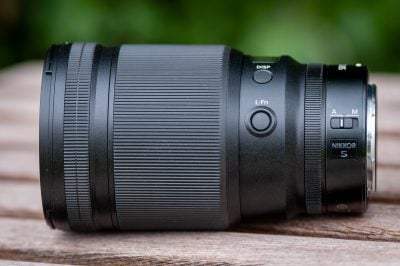 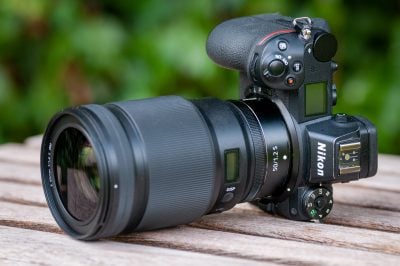