The Nikon 105mm f1.4E is a bright mid-length telephoto lens designed for Nikon DSLRs with full-frame sensors. Historically it’s the third 105mm lens with autofocus from Nikon with the 105mm f2D DC and the 105mm f2.8G Macro preceding it. With an f1.4 focal ratio, the new 105mm f1.4E becomes not just the brightest telephoto of its length from Nikon, but one of the brightest teles from any manufacturer. The only lens that boasts f1.4 at a longer focal length is the Mitakon Speedmaster 135mm f1.4, but it’s been at pre-order since announcement a year ago and limited to 100 units. So in terms of wide availability, the Nikon 105mm f1.4E is pretty unique.

Up to now 85mm lenses were the longest widely-available focal length with such a large aperture. The additional 24% reach of a 105mm over an 85mm lens promises better background isolation and the potential for creamier Bokeh. The 105mm f1.4E has no image stabilization but sports an electromagnetic diaphragm (hence the “E” moniker) and fluorine coating on the front and rear elements to make it easier to clean. It’s gold-ringed and comes at a price of 2200 USD / 2400 EUR which is in line with Nikon’s pricing for professional lenses nowadays (except for the long sports/wildlife tele-lenses). In my Nikon 105mm f1.4E review I’ll share my findings, including sharpness results, contra-light performance, Bokeh, and a selection of sample images when mounted on a Nikon D810 body.

As usual I’ll have a look at the technical data of the Nikon first. I’ve rated the features with a [+] (or [++]), when it’s better than average or even state of the art, a [0] if it’s standard or just average, and [-] if there’s a disadvantage. For comparison I use the Nikon 105/2.0D DC (“DC Nikkor” for short), the Samyang / Rokinon / Walimex 135/2.0 ED UMC (“Samyang”) and the Zeiss Otus 85/1.4 (“Zeiss”). That may look like an odd selection but there is really no direct competition to the new Nikon lens and both the Samyang and the Zeiss are benchmarks in their respective class. 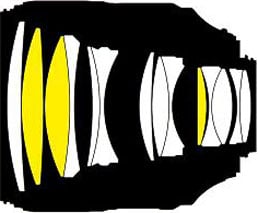 Optics: 14 elements in 9 groups. This is quite a complex design for a prime lens and contains 3 extra low dispersion elements with fluorine coating at the front and back for easier cleaning and Nano Crystal Coat to reduces ghost and flare. The DC Nikkor employs only 6 lenses in 6 groups. The new Nikon, the DC Nikkor, and the Samyang have no aspheric elements which should be good for the Bokeh as this avoids onion rings. The Zeiss is 11 elements (one of which is aspheric) in 9 groups. [+]

Filter-thread: 82 mm, so you probably will need new filters but the Zeiss needs even larger 87 mm filters. The Samyang is 77 mm, the professional standard, the DC Nikkor 72mm. [0]

Image stabilization: No. That’s about par for the course on large aperture primes: Neither the Samyang nor the Zeiss offer stabilization, too. Unfortunately at a focal length of 105mm and with today’s high resolution sensors it’s pretty challenging to avoid blur/shake with hand-held shots. Use 1/200 sec to be on the safe(r) side or use a tripod. Tamron has proven that you can build f1.8 primes with image stabilization and not compromise image quality for it. [0]

Auto focus: AF-S with SWM (silent wave motor), so it does work on Nikon D3x00/D5x00-bodies. Manual-focus override is by simply turning the focus ring. The DC Nikkor offers AF but needs a body with AF drive. And there is a switch to toggle between AF and MF. Both the Samyang and Zeiss offer manual focus only. [+]

Comes with a flexible lens pouch (no padding, no strap), the lens hood is included, reversible for transport, and the lens-caps are standard Nikon’s. The Samyang comes with similar accessories, while the Zeiss does not even have a lens-case. [0]

Distance information is relayed to the camera, so Nikon bodies and flashes can do all the advanced exposure-related stuff with this lens. Same for the DC Nikkor. But the Samyang and the Zeiss both can’t do that although both have electrical contacts and communicate some EXIF data (like focal length and aperture) with the body. [+]

Aperture ring: no. The Samyang and the Zeiss both have an aperture ring in their Nikon ZF.2 version as does the DC Nikkor. So you can control aperture from these lenses just like in old times. [0]

Sealing: yes! The standard Nikkor rubber grommet at the lens-mount – but no further weather-sealing. The DC Nikkor, the Samyang and the Zeiss don’t have weather sealing at the lens-mount. [+]

The score in the “features-department” is 1[-]/7[0]/5[+]. The major minus being the high price. So the new Nikkor better performs very well to justify the price. Another issue is its massive size, especially the diameter of the focus ring which might not feel comfortable in smaller hands.

– From Nikon there’s the venerable AF DC 105/2.0D from 1993. It offers autofocus (driven by the camera) and has a unique Defocus-image Control (hence the “DC” moniker) which can be used to change the appearance of out-of-focus areas (see my Nikon 105mm f2.0D DC sample images). It still has a good reputation and costs around 1000 EUR.

– The nearest alternative from Zeiss are the ZF.2 Macro-Planar T* 100/2.0 and its successor, the ZF.2 Milvus 100/2.0 Macro, costing around 1650 EUR. The Planar is reportedly very sharp but has some visible Bokeh fringing. The Milvus employs the exact same optical formula but with weather sealing and the de-click feature for step-less aperture control (in ZF.2-mount only).

As there are no other large aperture 100/105mm lenses for Nikon bodies let’s have a look at 135mm f2.0 lenses as alternatives. These lenses have an almost 30% longer reach and consequently offer a 30% larger magnification of far away subjects which compensates a bit for their typically one stop smaller focal ratio with regard to throwing background out-of-focus:

– Zeiss offers their 135/2.0 Apo Sonnar from 2013. It is manual focus only and costs 1800 EUR. It is built like a tank and has an excellent optical quality. See my Zeiss 135mm f2.0 Apo Sonnar review where it came with a Recommended.

– Samyang has the 135/2.0 ED UMC from 2015. It is manual focus only and costs a mere 500 EUR (incl. 19% VAT). Its build is rather plasticky but it has excellent optical quality, in some aspects even better than the Zeiss. See my Samyang 135mm f2.0 ED UMC review where it came with a Highly Recommended. Be aware though that only the Nikon version of the Samyang has an automatic aperture!

– As noted in the introduction, there’s also the Mitakon Speedmaster 135mm f1.4, the brightest 135mm to date, but one that’s been at pre-order since announcement a year ago and with only 100 units to be produced. If I get to try a final production sample I’ll provide images, but right now it essentially doesn’t exist for a comparison.

Or you go a bit shorter and have a look at 85mm f1.4 lenses of which there is no dearth. I’ll mention just two:

– Zeiss offers the 85/1.4 Otus which is manual focus only and costs around 4000 EUR. It earned a highly recommended for its benchmark image quality and tank-like build-quality in my Zeiss Otus 85/1.4 review.

Focus accuracy and repeatability is critical to consistently produce sharp shots. Repeatability (the accuracy of focus on the same subject after repeated focus-acquisition) of this lens is very good (measured 98,4% in Reikan FoCal) with no outliers over a series of 40 shots. And there is no performance variation whether the lens focuses from infinity or from a closer distance.

The lens focuses reasonably fast in around 0.8 sec from infinity to 1.05m which is similar to the Nikon 85/1.4G. The focus ring has no slack/play between its movement and the focus-action and a throw of 110 degrees, which is just good enough for accurate manual focus wide open. The focus ring is 95mm in diameter which is the largest I know of. The grip is good with a 28mm broad rubber surface and movement is very smooth. AF-operation is barely audible from the outside and if you record video with the built-in microphone there’s only a metallic “zip” at the beginning and the end of focus-movement and the AF-drive is very quiet. As you pull focus, you’ll clearly notice focus breathing – this is where the image becomes more magnified at closer focusing distances. When I adjusted the focus from infinity to 1.05m on the Nikon, I measured a 28% increase in magnification which is very high and might not please videographers. In comparison the Nikon 105/2.0 D DC only increases magnification by 2%. In general the impression of build quality is that of an upmarket/enthusiast albeit not pro-level lens: A high quality construction but with little metal on the outer body apart from the metal lens-mount. Which does not say anything about the robustness of the inner construction which better be good as the lens elements are pretty heavy. The lens-mount is weather sealed and the lens sports nine rounded aperture blades and a lens hood that is not the tightest fight and easily turns loose. 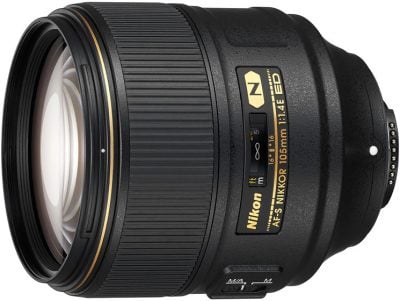