This is a unique lens for Nikon DSLRs: it's a fisheye, it's a zoom and it goes down to 8mm focal length producing fully circular images on full-frame/FX bodies. This combination was not available for Nikon shooters before. It is also the only fisheye from Nikon that can auto-focus on D3x00 and D5x00 bodies. It is well-sealed against the elements, puts away with the mechanical aperture coupling and adds dirt-repellent fluorine coating on the front and rear lens elements. But most importantly: the optical performance is very convincing topping that of both Nikon fixed focal fisheyes as well as the fisheye zoom from Tokina. Yes, the lens has its price but it effectively replaces three fixed focal fisheye lenses and thus is the most versatile tool. Add a quite and reliable focus and a moderate size and weight and you get a package that clearly earns a Highly Recommended.

Check prices on the Nikon 8-15mm Fisheye at Amazon, B&H, Adorama, Wex. Alternatively get yourself a copy of my In Camera book or treat me to a coffee! Thanks!

The Nikon 8-15mm f3.5-4.5E ED fisheye is a 1.9x super wide-angle zoom. It has an angle of view of 180 degrees and projects a circular image at 8mm on a full-frame sensor, completely covers a DX-sensor at 11mm, and completely covers a full-frame sensor at 15mm. So this zoom covers effectively three separate fixed-focal fisheye lenses. The only thing you cannot do with it is to project a circular image on a DX-sensor: for that you’d need a 5.5mm fisheye lens. Announced in April 2017, it fills a gap in Nikon’s lineup of lenses as up to now Nikon only offers its 10.5/2.8G DX fisheye and the 16/2.8D FX fisheye. Nikon equipped its new lens with an electromagnetic diaphragm mechanism, nano crystal coat plus fluorine coating on the front and rear lens elements for easier cleaning, and also hardened the lens barrel with additional sealing against dust and moisture. This makes the gold-ringed lens fit Nikon’s line-up of professional lenses and they charge accordingly: 1250 USD / 1500 EUR is the list-price for this new zoom. 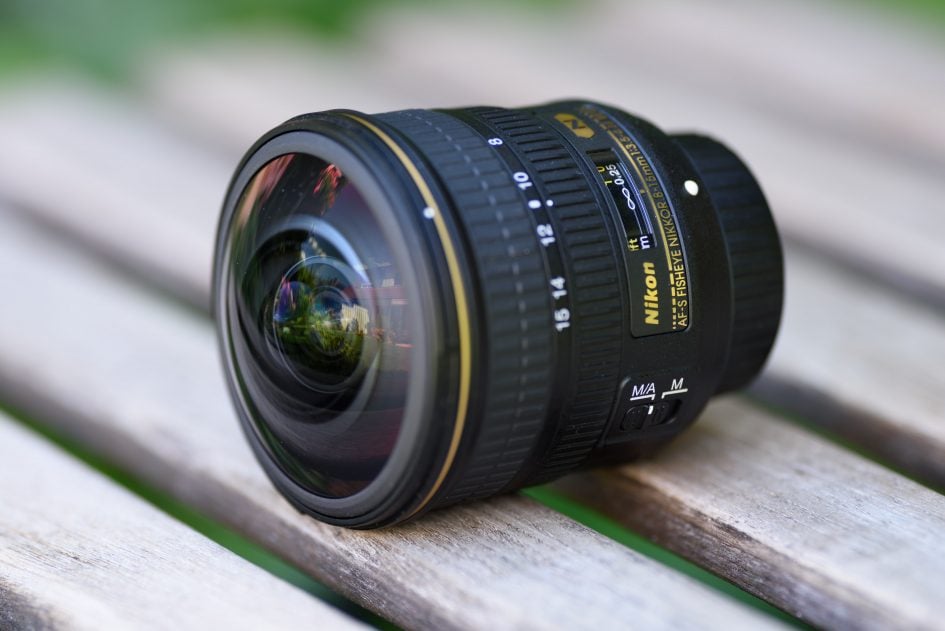 As usual I’ll have a look at the technical data first. I’ve rated the features with a [+] (or [++]), when it’s better than average or even state of the art, a [0] if it’s standard or just average, and [-] if there’s a disadvantage. I’ll compare it mostly with Nikon’s only other full-frame fisheye, the 16/2.8D.

Optics: 15 elements in 13 groups which is much more than the 8/5 of the 16/2.8D. But that lens isn’t a zoom. The new lens has three (extra) low dispersion and two aspherical elements. Nano coating should reduce flare and ghosting. [+]

Filter-thread: None of the fisheye lenses (or any ultra wide-angle zooms from Nikon, Tamron, Sigma or Canon for that matter) offer a filter-thread. Their bulbous front elements prevent that. But you can insert 27x29mm gel-filters in a slot over the rear lens-element. See next photo. The Nikon 10.5/2.8G has a similar slot and the 16/2.8D offers a special type of screw-in filter over the rear lens-element. [+] 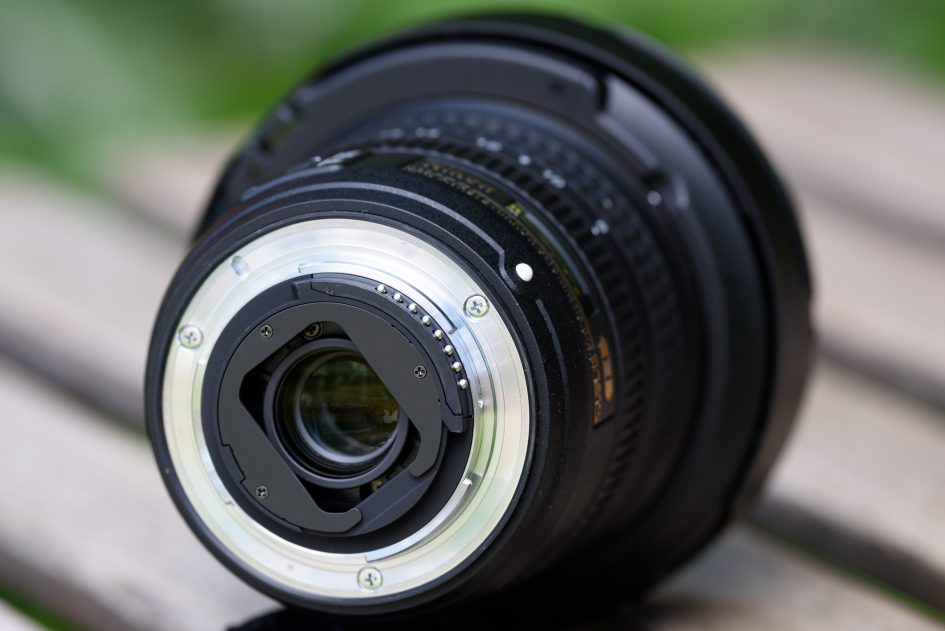 Auto Focus: HSM (Hyper Sonic Motor), so it also works on camera bodies which don’t have an AF-drive built in like Nikon’s D3x00/5×00. Manual-focus override is by simply turning the focus ring. All the alternatives from  Nikon and Tokina need a focus-motor in camera to drive the AF. [+]

Comes with a standard soft case. The lens hood has an interlock to prevent accidental loss. It can be removed and should be when you’re shooting circular images on a full frame sensor below 14mm focal length. The front lens-cap does arrest in place when mounted on the lens hood (see next photo) – very good! When you use the built-in flash the shadow of the lens (even without hood) is always visible at the bottom of the image at any focal length on an FF-/FX sensor. If you crop to APS-C/DX format the shadow is slightly visible at a focal length of 11mm and becomes more pronounced at shorter focal lengths. The onboard flash of the D810 can fill the DX frame at 15mm focal length relatively well but shows heavy vignetting at 12mm and shorter focal lengths. [0] 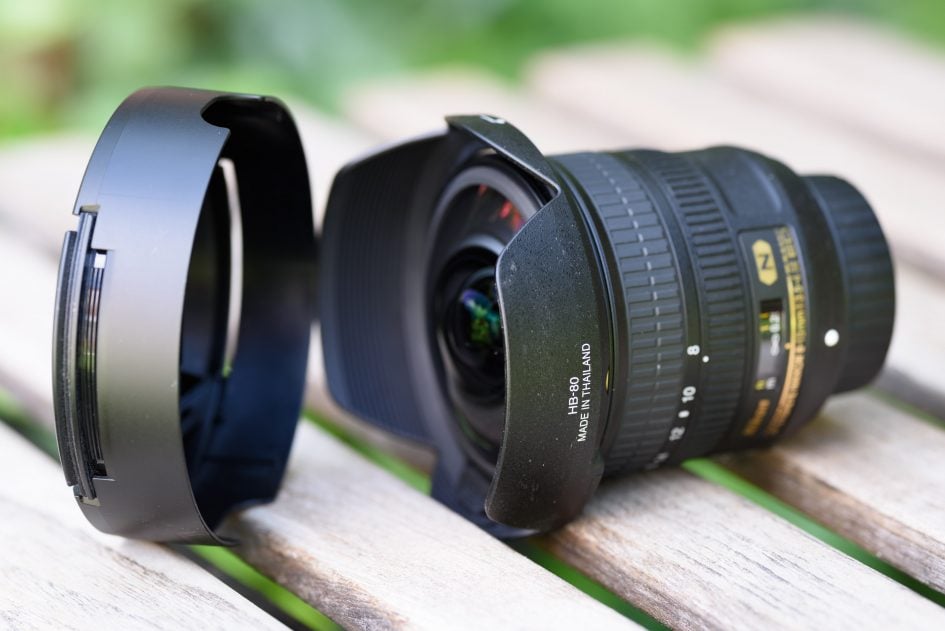 Sealing: A rubber grommet at the lens-mount and more in the lens barrel. [+]

Here is what the 8-15mm zoom projects on the sensor:

And in case you wonder how a “straight” 15mm lens would capture the same scene following is an image from the Tamron 15-30/2.8 VC at 15mm: 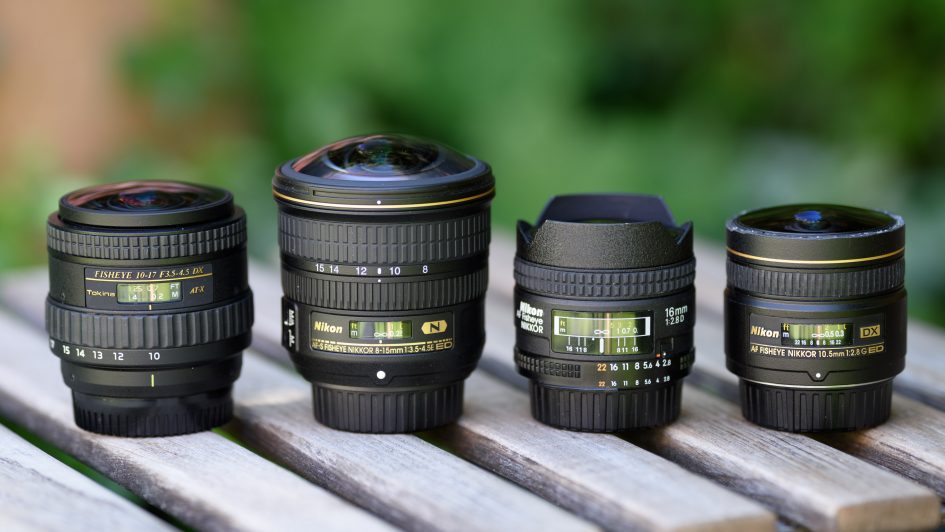 Focus accuracy and repeatability is critical to consistently produce sharp shots. Repeatability (the accuracy of focus on the same subject after repeated focus-acquisition) of this lens is very good (measured 99.1% in Reikan FoCal) with no outliers over a series of 40 shots under strictly controlled test conditions. And there is only very little performance variation whether the lens focuses from infinity or from a closer distance.

At 15mm focal length the lens focuses with no hunting in around 0.3 sec from infinity to 0.27m, which is very fast. The focus ring has no slack/play between its movement and the focus-action and a throw of 55 degrees which is good enough for manual focus wide open. Its rubberized surface is 10mm wide and can be turned with one finger. The zoom ring turns through 60 degrees and has a 14mm wide rubber surface and can also be turned with one finger. Nikon put the zoom ring at the front of the lens and the focus ring behind that.

AF-operation is very quiet from the outside, and if you record video with the built-in microphone the AF-drive produces a slight hiss and only faint clicks at the start or stop of focus-movements.

As you pull focus, you’ll notice some focus breathing: the image becomes less magnified at closer focusing distances. When I adjusted the focus from infinity to 0.27m, I measured a 1-2% decrease in magnification at 8mm and 15mm focal length which is minimal and should not prove distracting when shooting video. Next check out my quality results and sample images!

Check prices on the Nikon 8-15mm Fisheye at Amazon, B&H, Adorama, Wex. Alternatively get yourself a copy of my In Camera book or treat me to a coffee! Thanks!
Pages: 1 2 3 4 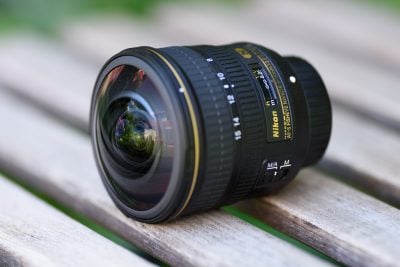 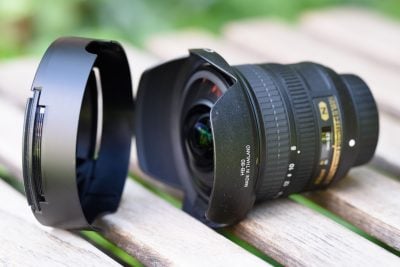