The Nikkor DX 55-200mm VR is an entry-level telephoto zoom for DX-format Nikon DSLRs. Launched alongside the Nikon D40x in March 2007, it’s designed to complement the standard DX 18-55mm kit lens and extend the maximum equivalent coverage from 83 to 300mm. This makes it ideal for portraits, wildlife and sports photography, while the shorter end remains practical for many day to day shots.

Unlike the earlier DX 55-200mm lens, the new model features Vibration Reduction, VR, technology which provides optical stabilisation, allowing you to handhold shots at shutter speeds three stops slower than normal. It’s also an AF-S model which means quick and quiet auto-focusing and compatibility with both the D40 and D40x, along with other DX-format Nikon DSLRs. 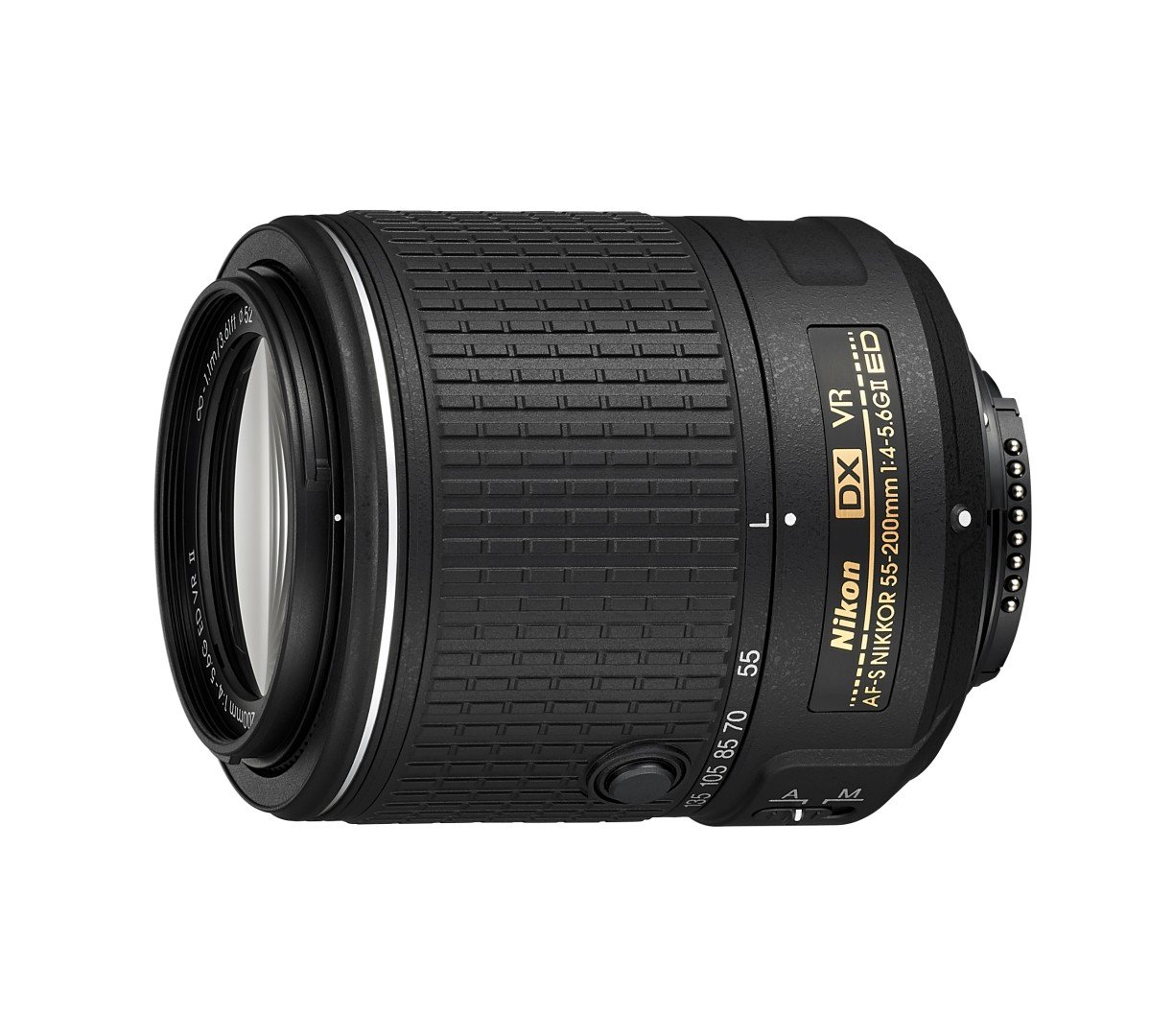 Perhaps the most surprising aspect of the DX 55-200mm VR is its relatively low price – indeed it’s the most affordable Nikkor lens with Vibration Reduction facilities at the time of writing, and when coupled with the DX 18-55mm II lens, matches the coverage of the popular DX 18-200mm VR at a much lower price. Of course the DX 18-200mm VR features Vibration Reduction throughout its entire range and the convenience of a single lens solution, but a pair of lenses with shorter focal ranges are easier to design, lighter, cheaper and have the potential to perform better optically.

So the big question is how the DX 55-200mm VR compares against other Nikkor options, including the DX 18-200mm VR super-zoom, and premium telephoto zooms like the 70-300mm VR. In our full review we’ll compare the DX 55-200mm VR against both of these models, along with the DX 18-135mm kit lens to see how it performs. We’ll also put its Vibration Reduction to the test to see what kind of shutter speeds you really can get away with.

There’s no denying the DX 55-200mm VR looks like great value in theory, but can it actually deliver the goods in practice? Find out in our full review, and check out its headline features in our Nikkor DX 55-200mm VR video tour.

We tested the Nikkor DX 55-200mm VR with a Nikon D80 body. Unless otherwise stated, the D80 was set to Large Fine JPEG mode, with Auto White Balance, 3D Matrix metering and the Optimise Image parameter set to the default Normal for sharpening, tone, colour, saturation and hue; High ISO Noise Reduction was set to Normal. The serial numbers for the DX 55-200mm VR and 70-300mm VR lenses on test were 331788 and 2043311 respectively.

The Nikkor DX 18-135mm, DX 55-200mm VR and 70-300mm VR lenses are pictured below, from left to right, zoomed-out to their shortest focal lengths. For each lens, this represents their physically most compact configuration.

Zoom each lens into their longest focal lengths, as seen below, and the DX 55-200mm VR becomes the shortest of the three, extending with a single barrel by only 35mm. The DX 18-135mm extends by 59mm using twin barrels, while the 70-300mm adds 49mm to its total length. The latter may not actually extend by as much as the DX 18-135mm, but comfortably remains the biggest of the three lenses pictured.

Of course this can be seen in both a positive and negative light. If you want a telephoto zoom which you’ll hardly notice mounted on your Nikon DSLR or which will rarely be a burden in your bag, then the DX 55-200mm VR will delight. It’s also so light, there’s no chance of any lens creep where the barrel can extend or retract under its own weight. On the other hand, it’s clearly not as tough or well-built as the 70-300mm VR.

To be fair, the DX 55-200mm VR’s build quality is actually quite good for such a light, budget lens. It’s roughly to the same standard as the DX 18-55mm II and DX 18-135mm kit lenses, and like these models employs a plastic lens mount. So while it can’t be described as substantial in any way, the DX 55-200mm VR is certainly well-assembled with smooth moving parts and no wobbles or creaks to worry about.

If you’re after something tougher though, the 70-300mm VR is in a completely different league. The DX 18-200mm VR is also built to a similar standard to the 70-300mm VR and both offer more confident operation than the budget models. Interestingly while the DX 18-200mm VR is much heavier than the DX 55-200mm VR at 560g, it is in fact only 20g more than the combined weight of it and the DX 18-55mm II lenses. So if you were thinking of the lightest Nikkor optical solution with an 18-200mm range, there’s not really much benefit in going for the twin lens solution.

In terms of accessories, the DX 55-200mm VR may be a budget model, but that doesn’t stop Nikon including both a lens hood and pouch. Are you listening Canon? You should be ashamed.

The DX 55-200mm VR uses a seven-blade aperture diaphragm, compared to nine on the 70-300mm VR, and this would normally produce less attractive out of focus bokeh effects. That said, Nikkor’s done a good job with the cheaper lens and in our tests the bokeh wasn’t significantly worse than the 70-300mm VR. This is a very personal thing though, so head over to our DX 55-200mm VR Sample Images for some examples.

In terms of focusing, the DX 55-200mm VR is equipped with one of Nikkor’s SWM Silent Wave Motors, built into the lens itself. This makes it an AF-S model, and as such will auto-focus on the D40 and D40x, along with every other Nikon DSLR.

Nikon has to build focusing motors into its latest lenses in order for them to auto-focus with budget DSLRs like the D40 and D40x, but it has the welcome consequence of effectively equipping even its budget lenses with quick and quiet AF capabilities. Contrast this with Canon’s lens range where its quick and quiet USM motors are absent on the budget models. So this gives models like the Nikkor DX 55-200mm VR a classiness you wouldn’t normally expect at the price.

The DX 55-200mm VR takes just over one second to focus from one extreme to the other when fully-zoomed-in, which only makes it fractionally slower than the pricier 70-300mm VR. We’re also pleased to report the focusing takes place internally, so the barrel neither extends nor rotates during focusing – great news for users of polarising filters.

In terms of manual focus, the DX 55-200mm VR is equipped with a basic ring at the end of the barrel, which turns during AF and needs to be unlocked using the A / M switch on the side of the lens for manual operation. There’s no full-time manual focusing, and no distance marks behind a window. For these you’ll need a classier lens like the 70-300mm VR or DX 18-200mm VR. So while you can manually focus with the DX 55-200mm VR, if it’s something you’ll be doing on a regular basis, you’ll undoubtedly prefer one of the higher-end models.

The Nikkor DX 55-200mm VR is designed as an entry-level telephoto zoom to complement the range of the standard DX 18-55mm II kit lens. It literally starts where the other stops, giving you a total range of 18-200mm – or an equivalent of 27-300mm – in an affordable twin lens package.

Most people thinking of buying the DX 55-200mm VR will be weighing it up against the pricier 70-300mm VR model, so to compare their coverage in practice, we mounted a Nikon D80 on a tripod and took photos with each lens from the same spot, when fully zoomed-out and fully zoomed-in.

Below are examples of both lenses zoomed-out to 55 and 70mm respectively and you can see how the DX 55-200mm VR captures a slightly bigger field of view. If you already have the DX 18-55mm and are thinking of going for the 70-300mm VR though, you certainly won’t miss much between 55 and 70mm, so having an uninterrupted range shouldn’t sway your opinion too much.

Below are examples of each lens zoomed-into their longest focal lengths and the difference is clearly much greater. The 70-300mm VR with a maximum equivalent of 450mm clearly allows much tighter crops than the DX 55-200mm can at an equivalent of 300mm. This extra reach makes a big difference if you’re into photographing small or distant subjects, such as wildlife or sports, and can really isolate people (or anything else) against their backgrounds in portraits.

So ultimately you have to ask yourself how powerful would you’d like your telephoto zoom to be. The DX 55-200mm VR will certainly give you decent telephoto coverage, but if you’re after something longer, then you’ll need to spend more on a model which zooms to 300mm or even beyond. We have several real-life examples at 200mm in our DX 55-200mm VR Sample Images page, so check it out and see if it’d be sufficient for your needs. But continue on this page to see how the lens performs in terms of anti-shake capabilities.

The Nikkor DX 55-200mm VR is equipped with Vibration Reduction to counteract camera-shake. It’s an optical system, which means you see the benefit through the viewfinder, and like Canon’s IS system, it can be very reassuring to see your composition suddenly become steady as you half-press the shutter release. It also makes framing the shot at longer focal lengths much easier.

VR is enabled on the DX 55-200mm VR with a simple switch on the side of the lens, after which the system will activate as you half-press the shutter release button. There’s only one mode on this lens, so if you’re panning, you’ll have to switch it off. In contrast, higher-end lenses like the 70-300mm VR offer two VR modes, the second only stabilising in the vertical axis for use when panning horizontally.

Nikon claims up to three stops of compensation for the DX 55-200mm VR, so to put it to the test we took a series of photos of a distant house zoomed-into 200mm with and without VR enabled. We started each series at a shutter speed of 1/250 and progressively reduced it by one stop until 1/8.

Without VR, we required a shutter speed between 1/125 and 1/250 for a perfectly steady result, whereas with VR we achieved the same result at a shutter speed of 1/15. This corresponds to between three and four stops of compensation, and closer to four if you compare it against the traditional photographic advice of requiring a shutter speed of one over the effective focal length.

Below are examples of shots taken with and without VR at 1/15, reproduced here at 50%. They immediately reveal the kind of benefit you’ll enjoy, although like all anti-shake systems it will only stabilise a subject that’s static; if you want to freeze a subject in motion, you’ll simply need a faster shutter speed.