Pictured below from left to right are the Canon EOS-350D, Konica Minolta Dynax 5D, Nikon D50 and Pentax *istDL. Compared side by side with its rivals, the Dynax 5D is by far the most angular in design. While lacking the curves of the competition though, the decent-sized grip feels comfortable, and the controls are sensibly positioned.

Measuring 130 x 92 x 66mm, it’s considerably smaller than its predecessor the Dynax 7D – indeed the 5D’s roughly the same size as Canon’s compact EOS-350D. While lighter than the Dynax 7D though, the 5D is much heavier than its budget digital SLR rivals. Fit the rechargeable battery and optionally-bundled 18-70mm lens and the entire package weighs in at a relatively hefty 910g. This weight does however give the 5D a reassuring feel and the overall build quality is very good – the body feels very sturdy. 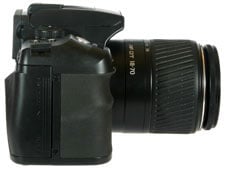 The 5D’s powered by a single 1500mAh Lithium Ion battery pack and is supplied with a mains recharger. Konica Minolta estimates a full charge is good for up to 700 shots. While this is around half the estimates of the competition we found a full charge still lasted us throughout our testing period – and this was with Anti Shake activated on virtually every shot, along with the main screen being used for all shooting information (see later).

The earlier Dynax 7D shunned navigating through on-screen menus in favour of direct manual control over settings like exposure and flash compensation using numerous dials and buttons. In order to target beginners though, the considerable 30 external controls of the 7D have been pared down to 21 on the 5D. While more approachable, there’s still plenty of quick physical access to items which on other cameras would have you delving into nested menus. 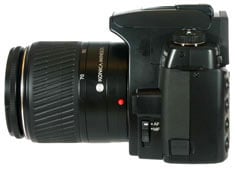 For example, white balance is adjusted using a dedicated dial on the upper left corner of the body. This dial has four positions and a central button, allowing you to choose between Auto, preset and custom white balance, along with manual selection of colour temperature between 2500 and 9900K. In use it’s quicker, easier and more intuitive than many menu-based systems.

The main shooting dial on the upper right side features the usual Auto, Program, Manual, Shutter and Aperture Priority modes, along with five scene presets. Shutter speeds range from 1/4000 to 30 seconds plus Bulb in one third stop increments. Exposure compensation is offered between +/-2EV in third stop increments.

The popup flash and hotshoe support fill, red-eye reduction, rear-sync and slow-sync options. The top sync speed is a relatively modest 1/125 with Anti Shake on or 1/160 with Anti Shake off. Flash compensation is available at +/-2EV in third stop increments.

Konica Minolta 5D composition and screen
The earlier Dynax 7D was one of the first digital SLRs to sport a large 2.5in screen, and Konica Minolta made the most of it by displaying all shooting information on it rather than using a traditional secondary status screen. In practice this actually worked very well, and allowed a couple of neat tricks to be implemented. 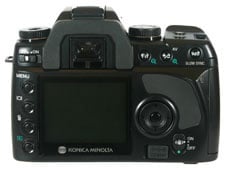 First, sensors detected the orientation of the camera and automatically flipped and reformatted the information on the display so the characters were always upright. This worked really well for portrait shots whether the camera was turned clockwise or anti-clockwise, although there was no 180 degree flip for the rare occasions when the camera was upside down. Secondly you could select a simplified display with slightly less detail, but larger characters. Sensors also detected when your eye was pressed against the optical viewfinder and shut down the screen backlight to save power.

The new 5D shares all of the above, and it remains both a fun and practical solution. The screen still measures a generous 2.5in, although to save costs, its resolution has almost halved from the 207,000 pixels of the 7D to just 115,000 pixels. While this actually matches the resolution of many smaller camera screens, it just looks way to coarse on a large 2.5in display.

The menus and shooting information don’t look too bad, but replayed pictures often appear as if some mesh has been placed over them. We know a low price point had to be met, but a smaller screen with the same number of pixels would have been preferable. It’s especially shown-up by the 210,000 pixel 2.5in display of the Pentax *istDL.

The nine-point auto focus system is quick and accurate. You can also switch between predictive focus control, auto tracking and manual focus point selection. The focus point is indicated in the optical viewfinder, and like its immediate competition, the 5D employs a penta-mirror to reduce cost and weight. 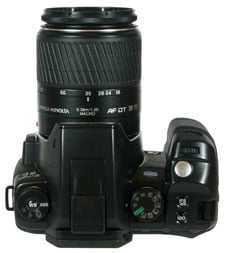 Konica Minolta 5D lens
The 5D is equipped with a Minolta A-Type bayonet lens mount and supports all Dynax / Maxxum lenses, with their focal length effectively multiplied by 1.5 times. When the earlier 7D was launched, Konica Minolta didn’t have any lenses specifically designed for the smaller sensor size of this digital SLR. Without a budget 18-55mm option, many people were forced to buy the premium 17-35mm f2.8~4.0 as their standard lens.

Choosing to bundle an 18-70mm lens at such a low price is one of the great selling points of the 5D, as the range is noticeable longer and more useful than the 18-55mm standard lenses of its budget rivals. A small lens hood is also included, although like the Nikon and Canon 18-55mm lenses, the front element rotates when focussing, which is annoying for users of polarising filters. We tested the 5D with the 18-70mm lens, which has a range equivalent to 27-105mm on a 35mm camera. It measures 66x77mm and weighs 240g. Focussing was fast, but louder than its competition.