With its fifth generation, the Fujifilm X100V finally fulfils the ambition and promise of the original concept. Since day-one back in 2010 it’s delivered one of Fujifilm’s X-Trans sensors in an attractive compact and retro-styled body with a fixed lens, hybrid viewfinder and virtually silent leaf shutter, but while this was enough to attract a passionate following with street photographers, earlier models disappointed in other respects, most notably with a soft lens at close range and lack of weather-sealing; I also personally felt it could be further improved with a tilting screen. The X100V resolves almost all of this while adding more besides. The redesigned lens now delivers satisfyingly crisp results near and far, the screen can tilt, the body’s now weather-sealed, and the X100V also throws in most of the video capabilities of the X-T30 including 4k. There are of course some caveats. The lens isn’t optically stabilised, nor is there sensor-based or electronic stabilisation either - this isn’t a deal-breaker for stills, but video shooters will need to find a way to steady it. The extending lens requires the optional filter adapter for the camera to become weather-sealed and right now the built-in ND filter isn’t available for video use. And like the X-T30, the longest video clip length is a fairly modest 10 minutes for 4k or 15 in 1080. I should add my X100V also became very warm in prolonged use, especially when filming 4k video, although in my own tests it never shut down due to overheating. Ultimately the upgrades on the X100V have transformed it into a very flexible camera that can successfully turn its hand to many subjects and situations. On a personal note, I also felt an emotional connection with the camera for the first time, and absolutely loved shooting with it. The X100’s evolving journey may have taken ten years to get to where we are now, but the X100V has now become my favourite fixed lens compact camera to date and one I can Highly Recommend.

Check prices on the Fujifilm X100V at B&H, Adorama, or Wex. Alternatively get yourself a copy of my In Camera book or treat me to a coffee! Thanks!

The Fujifilm X100V is a high-end compact camera aimed at enthusiasts and street photographers, featuring a 26 Megapixel APSC sensor, fixed 23mm f2 lens, hybrid viewfinder, tilting touch-screen and 4k video. Announced in February 2020, it’s the fifth model in the popular series and succeeds the X100F released roughly two years previously. Note the letter in the title previously referred to its position in the series, such as S for second and T for third, but since F was used for the fourth version, Fujifilm has opted for Roman numerals here with V.

The X100V, like its predecessors, packs Fujifilm’s latest APSC sensor, in this case, the X-Trans 4, equipping it with 26 Megapixels, a broad array of embedded phase-detect autofocus points, burst shooting up to 11fps with the mechanical shutter or 20 with the electronic (uncropped), and support for the most recent Classic Negative, Eterna and Acros Film Simulations. The X100V also becomes the first model in the series to record 4k video in UHD or the wider Cinema-4k formats at 24 to 30p for ten minute clips, or 1080 video for up to 15 minutes; 10-bit 4:2:2 output is also available over HDMI.

At first glance the X100V looks a great deal like the earlier models, although for the first time sports weather-sealing, so long as you fit the optional adapter ring and filter. It’s also the first X100 model to offer a tilting touchscreen and while it won’t articulate to face you (bad luck vloggers), it does make it easier to frame discreetly at low angles. As before the unique selling point is the hybrid viewfinder, similar to that in the flagship X-Pro series, which offers an optical or electronic view, or a combination view; I don’t believe it’s the same part as the X-Pro3, but the magnification is greater than the X100F. Meanwhile after reusing the same lens for four generations, Fujifilm has developed a new optical design which may share the same 23mm focal length and f2 focal ratio, but now claims to be sharper; it’s still not stabilised though, whether optically or with sensor shift.

The X100V may remain an unstabilised camera, but otherwise addresses most of my issues with the previous model, gaining a sharper lens, 4k video, a tilting touch-screen, USB-C which supports power delivery as well as charging, and weather-proofing (with an adapter kit). As such it becomes a much more capable and flexible camera for those who desire a high-end fixed lens compact. I’ve now fully tested a final production model and put together a video all about the experience below. If you’re just after a written version of the highlights and what’s new, keep scrolling! Don’t forget to check out my sample images and final verdict pages too!

Above: My in-depth video review of the X100V in practice. Keep scrolling for written highlights! 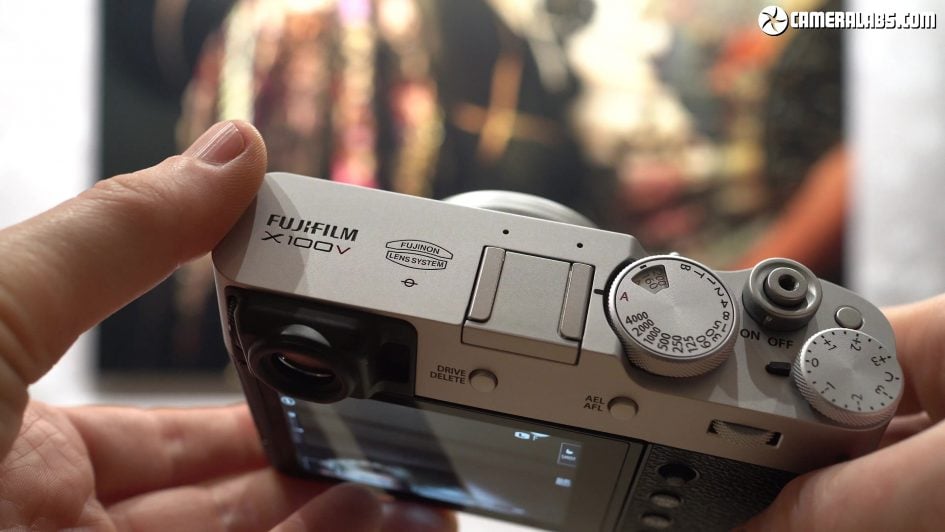 Above: At first glance, the X100V may look like the previous models, but features a raft of upgrades. First are a bunch of body enhancements, starting with a new aluminium top plate which, with new dials, has a smoother and less shiny finish – it’s all personal, but next to the older models, I reckon the X100V looks and feels much classier. Eagle-eyed Fuji-fans may also notice the line that runs along the front is now at the same height on both sides of the lens – careful attention to detail. 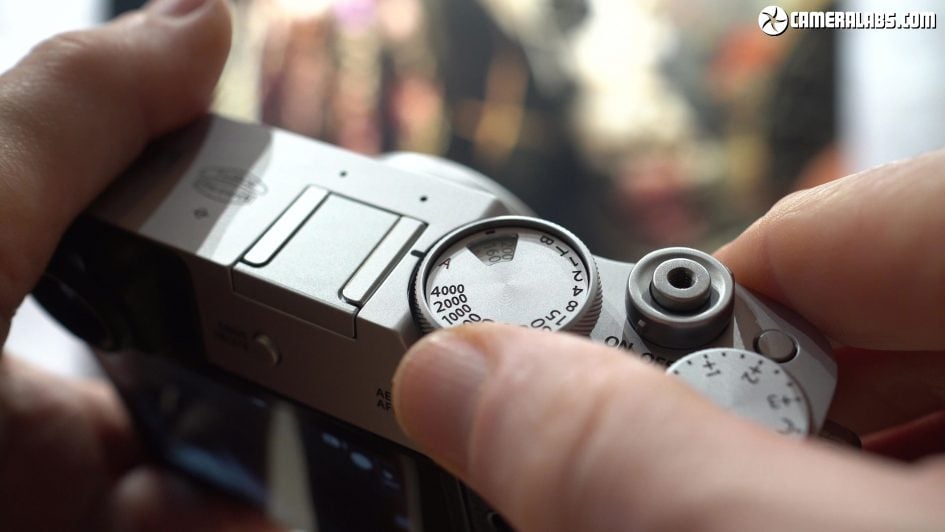 Above: There’s also a thoughtful tweak to the outer edge of the shutter dial which you’d previously need to hold up in order to adjust the ISO value, Now it lifts-up and stays in place, allowing you to easily turn it before clicking back down again to lock. 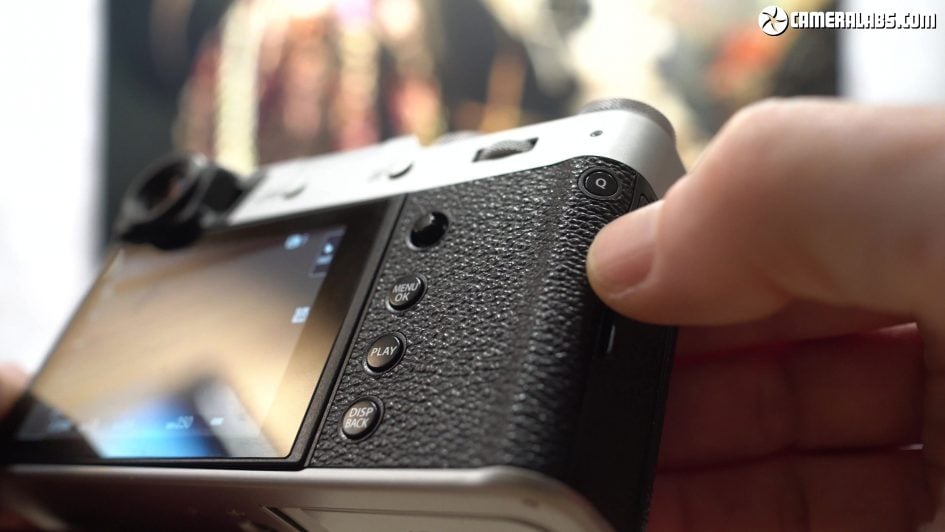 Above: Round the back, the cross keys – like many new Fujifilm cameras – have been dispensed with, leaving the joystick for most operations. Some owners may miss them, but it makes for a less cluttered rear panel for you to rest your thumb. 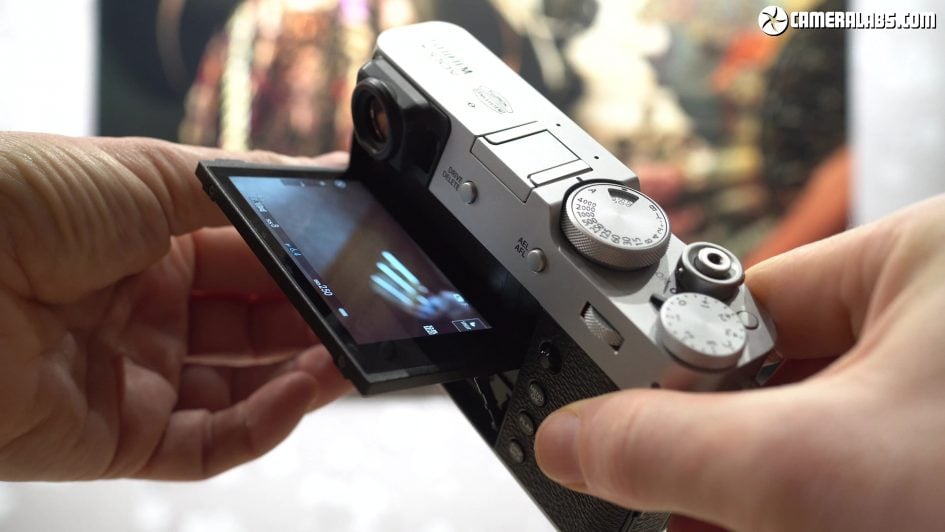 Above: Perhaps the biggest surprise is the screen which not only gains long-overdue touch-sensitivity, but also becomes the first on an X100 that can tilt vertically: up by 90 degrees or down by about 45. I love having this flexibility for composing at high or low angles, but it normally comes at the cost of a thicker body. Impressively Fujifilm has developed a very thin screen that becomes completely flush with the rear surface, so much so you may not even notice it can be angled-out. So the articulation is there if you want it, but essentially invisible if you don’t. And while vloggers will lament its inability to face-forward, it would have involved a thicker mechanism, spoiling the body’s design. I think Fujifilm made the right choice. 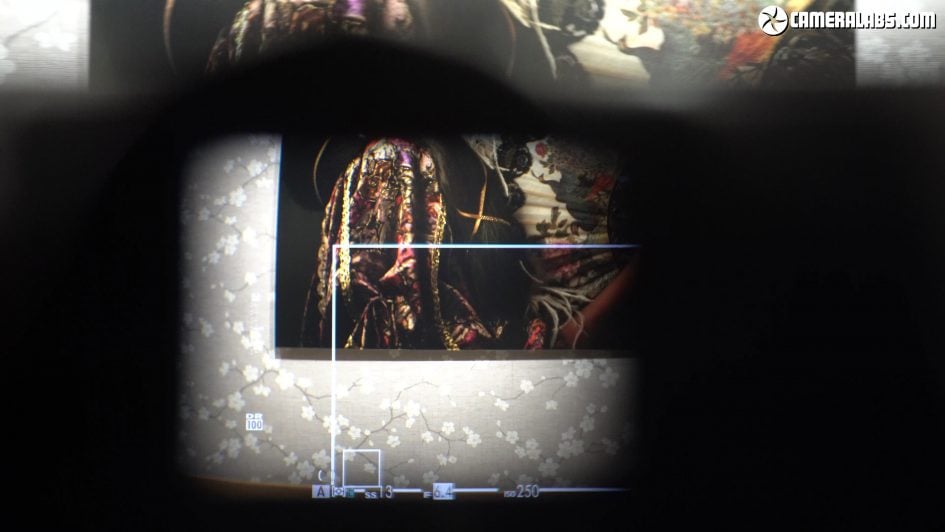 Above: Like previous models, the X100V sports a similar viewfinder to the current X-Pro, with optical, electronic or hybrid views. The optical rangefinder-style view is bigger than before, while the electronic view enjoys a more detailed 3.69 million dot panel, plus there’s the hybrid option which overlays a portion of the electronic panel over the corner of the optical view to aid with focusing and colour previews. Like the X-Pro series, it’s seriously clever stuff and while I mostly used the EVF on earlier models, I am becoming much more fond of the optical view. 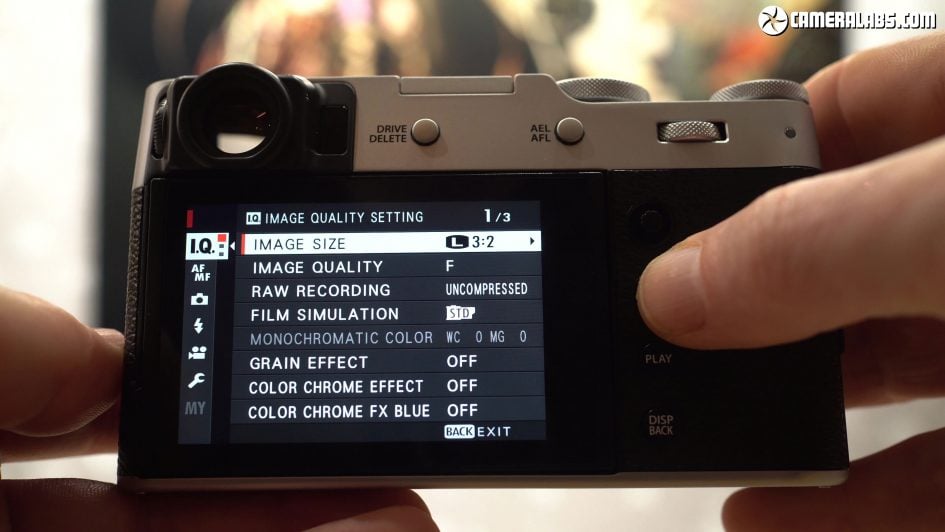 Above: In terms of photo quality, the X100V unsurprisingly features Fujifilm’s latest X-Trans IV sensor and X-Processor IV, equipping it with 26 Megapixels, a broad array of confident phase-detect autofocus points, 11fps burst shooting or 20fps with the electronic shutter and gratifyingly it also inherits the latest Classic Negative Film Simulation from the X-Pro 3, as well as the recent Eterna and ACROS simulations. 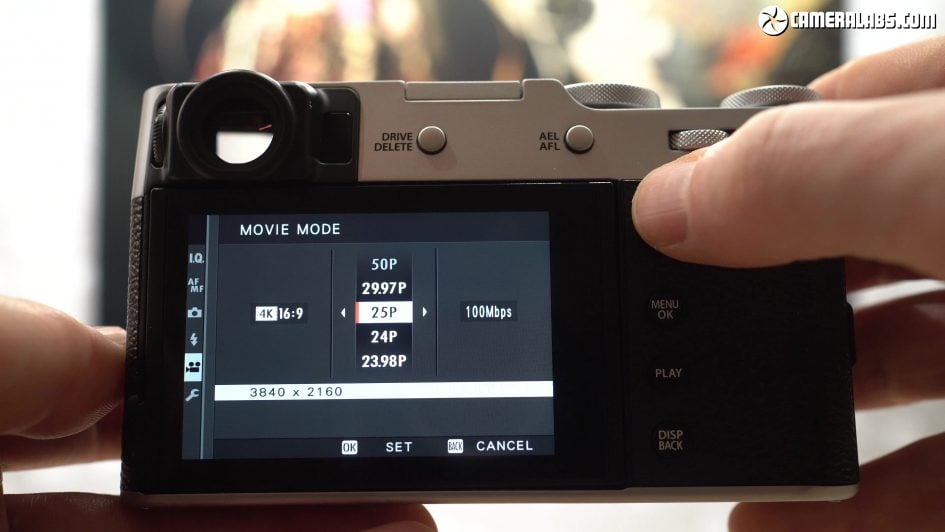 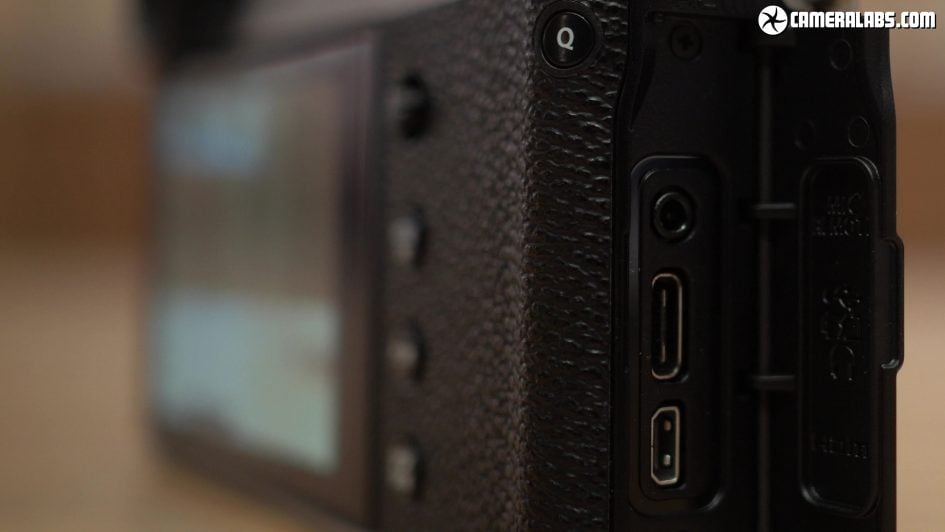 Above: In terms of connectivity, there’s a 2.5mm remote jack that doubles as a mic input, a new USB-C port that can be used for charging and power delivery or adapted as a headphone output, while the Micro HDMI can output 10-bit video – take that X-Pro3! 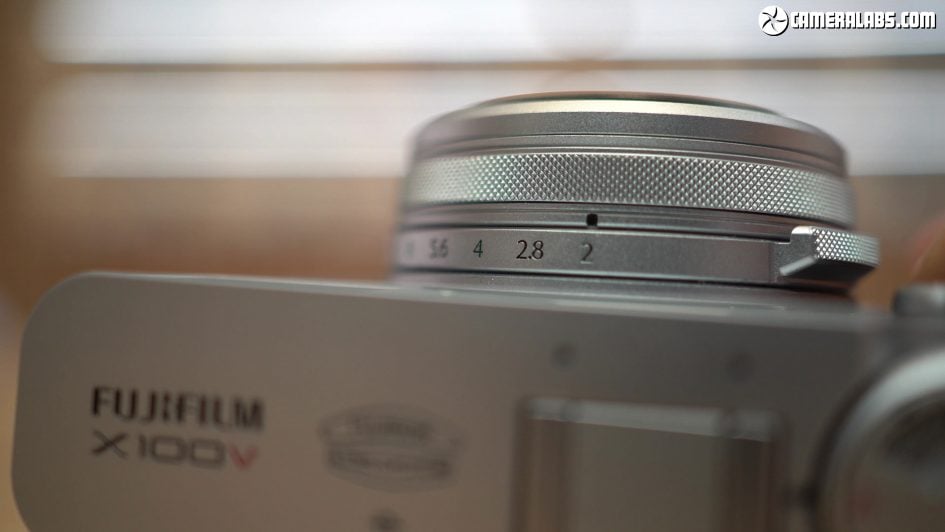 Above: So far so good, but the two biggest upgrades are still to come. First is the lens which may share the same 23mm f2 specification of the previous four models – so that’s roughly 35mm equivalent – but finally employs a new optical design. The earlier lens was frankly struggling with the latest sensors, so Fujifilm’s redesigned it for greater sharpness and higher contrast, while extending the built-in ND filter to four stops, although annoyingly this only seems to work for photos not video; hopefully that can be fixed. My tests prove the new lens transforms the sharpness at close range and it also feels a little faster at focusing too. Sadly the camera remains unstabilised though – I wish the lens has been optically stabilised, especially for video. 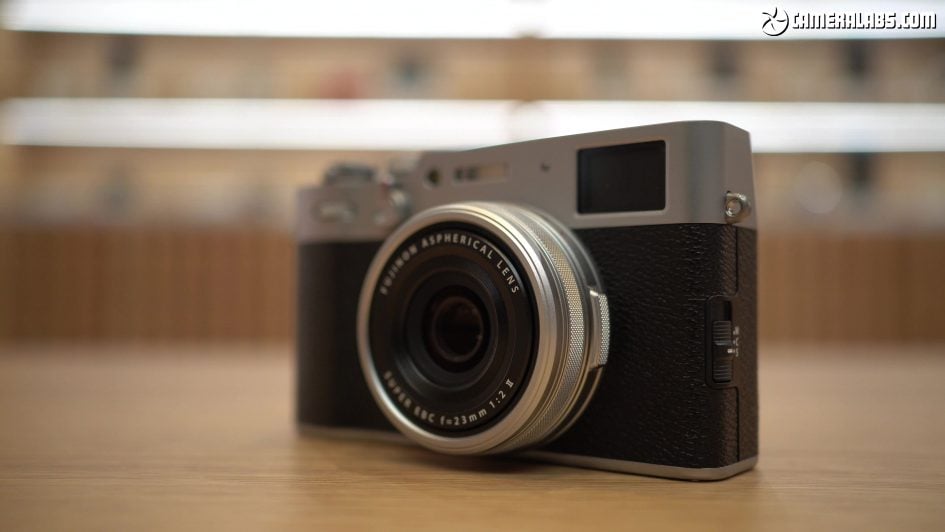 Above: The second major upgrade is the body which is now thankfully weather-proofed, making it a more practical option for all-round travel and street photography in all conditions. There is however one caveat: since the lens extends a little within its barrel, this is a vulnerable part of the body. To fully seal the camera, you’ll need to screw-on the optional adapter ring plus a filter of your choice – like a basic UV. These make it a little thicker, so it’s up to you to decide if you want the slimmest body or to sacrifice a little thickness for full sealing. It seems a reasonable compromise.

Check prices on the Fujifilm X100V at B&H, Adorama, or Wex. Alternatively get yourself a copy of my In Camera book or treat me to a coffee! Thanks!
Pages: 1 2 3 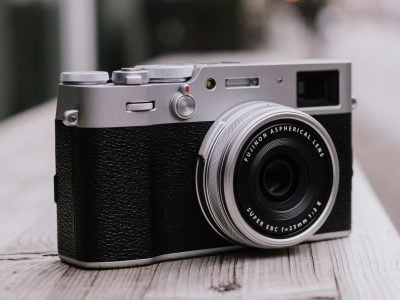 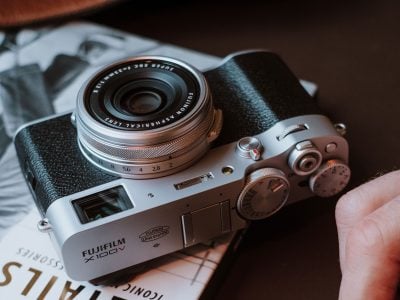 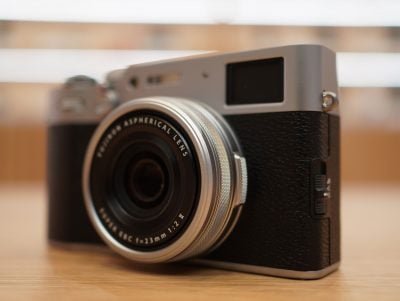