The Fujifilm GFX 50S is a medium format mirrorless camera with a 51.4 Megapixel sensor that's 1.7 times larger than the full-frame 35mm format. It's the first model in Fujifilm's new GFX system, aimed at photographers who want the ultimate in image quality. The body also features a focal plane shutter, a removeable electronic viewfinder, Wifi, 1080p video, and the same tilting screen mechanism of the XT2, not to mention touch capabilities and a number of similar controls. It's an exciting development for Fujifilm and a sensible complement to the X-series.

Check prices on the Fujifilm GFX 50S at Amazon, B&H, Adorama, or Wex. Alternatively get yourself a copy of my In Camera book or treat me to a coffee! Thanks!

The Fujifilm GFX 50S is a medium format mirrorless camera with a 51.4 Megapixel sensor that’s 1.7 times larger than the full-frame 35mm format. Announced in September 2016, it’s the first model in Fujifilm’s new GFX system, aimed at photographers who want the ultimate in image quality. It also represents Fujifilm’s solution for resolutions higher than 24 Megapixels which it believes is the practical limit for APS-C. GFX is the World’s first medium format mirrorless system with a focal plane shutter. This eliminates the need for leaf shutters to be built-into lenses, allowing more compact models to be designed, although it can still also work with lenses featuring leaf shutters – adapters for other systems are likely to come. The GFX system introduces a new G-mount which, thanks to the mirrorless design, supports very short flange-back and rear-focus distances; these in turn allow optical designs that deliver wide coverage with minimal distortion and sharp details into the corners at all apertures. Fujifilm promises six new lenses in 2017, the standard 63mm f2.8 (50mm equivalent) prime and 36-64mm f4 (25-51mm equiv) zoom at launch in early 2017, followed by the 120mm f4 OIS Macro by mid 2017, then the 45mm f2.8 (35mm equiv), 110mm f2 (87mm equiv) and 23mm f4 (18mm equiv) by the end of the year. All are weather-sealed and employ fly-by-wire electronic focusing like X-mount lenses.

Back to the first GFX body, the GFX 50S: it’s fairly compact for a medium format body, sharing a similar profile to a full-frame DSLR and weighing around 800g. It features a removable viewfinder to further reduce the form factor if desired, while also allowing accessories to be mounted in-between – including a neat platform which can tilt or rotate it. The screen shares the same articulation as the XT2, allowing it to tilt vertically, or hinge out to the side for easier composing in the portrait orientation. The GFX 50S specification isn’t yet final, but it’s also likely to feature weather-sealing, built-in Wifi (with the same functionality as X-series bodies), 1080p video, HDMI output and a touchscreen. The price hasn’t been finalized, but Fujifilm hopes to deliver the GFX 50S with the viewfinder and 63mm f2.8 standard lens for under $10,000. My hands-on first impressions follow. 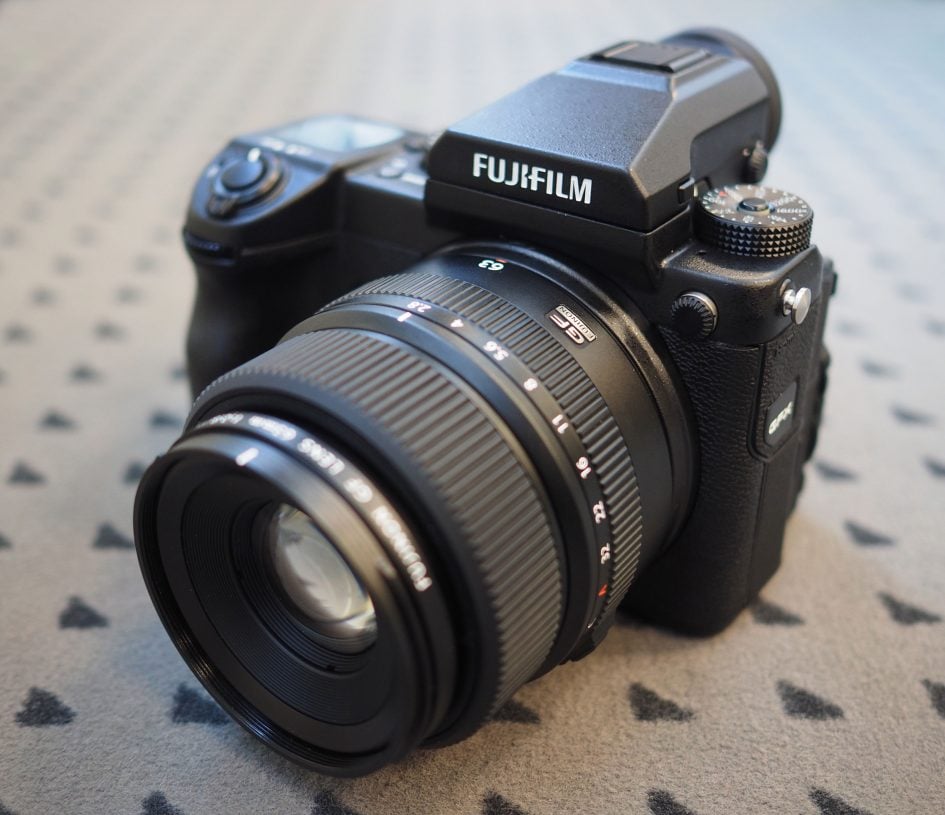 I had the chance to try out a pre-production GFX 50S at a Fujifilm event and quiz the engineers and designers behind it.

It’s fair to say the Fujifilm GFX announcement stole the show at Photokina 2016, albeit in the same way a new Ferrari would dominate the attention at a family car show. It is of course an unashamedly high-end product that’s obviously highly desirable, but with an understandably smaller target market. Fujifilm is aiming the GFX at photographers who demand the highest quality, typically shooting for billboards or high-end magazines.

It also addresses the question of where Fujifilm can go with X-series beyond 24 Megapixels as the company stated this resolution is already close to practical limits of optics when using an APS-C sensor. The jump to full-frame wouldn’t have provided significant benefits, so since any new system would require a new mount and new lenses, the additional leap to medium format made more sense – especially with the company’s heritage in this market.

Indeed the GFX aesthetic shares the DNA of both the recent X-series and the distant medium format film cameras of the Sixties, Seventies and Eighties. You can see elements of both in the new format, although equally it has a style of its own. In terms of size, the debut GFX 50S is fairly compact for a medium format camera and from the front shares a similar profile to a full-frame DSLR like a Canon EOS 5D or Nikon D810; it’s roughly similar in weight too at around 800g. Slide the supplied viewfinder off the body though and it becomes surprisingly small with a flat-top. 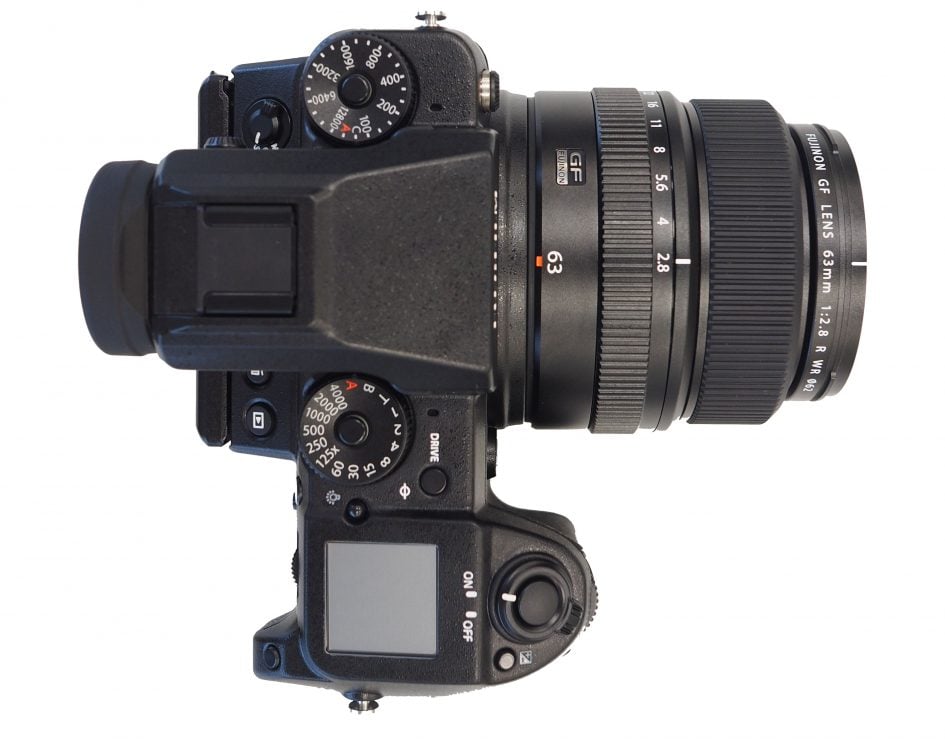 In your hands the GFX 50S feels solid and comfortable with a very generous grip featuring a deep dent for your middle finger. Coupled with a very pronounced thumb rest and sloping corner, it fits comfortably and securely into your hands, allowing you to hold it very steady. It needs to though, as the lenses are obviously much larger and heavier than the X-series.

The top surface is very reminiscent of X-bodies like the XT2 with the ISO dial and shutter dial flanking the left and right sides of the viewfinder. Like the XT2 both feature locking buttons, although the dials themselves are a little taller. There isn’t however an exposure compensation dial on the GFX 50S, instead you can use the front command dial to make these adjustments.

In the upper right corner of the GFX 50S you’ll also find a small LCD display panel which shows basic shooting information – shutter, aperture, exposure compensation, ISO, drive, film simulation etc – and remains visible even when the camera is turned off. It provides a very handy reminder at a glance.

The viewfinder of the pre-production sample I tried used an OLED panel with the same 2.36 million dot resolution as the XT2, although the magnification looked a little larger. Some of this could be down to the fact that shooting in the native 4:3 aspect ratio of the sensor will fill the entire viewfinder panel, rather than presenting a slightly letter-boxed image as on the XT2. Either way it was large and highly immersive.

The decision to make the viewfinder removeable isn’t unusual for medium format bodies, but provides intriguing possibilities in a digital mirrorless system. Most obviously it hints at possible upgraded finders in the future, although Fuji wouldn’t be drawn on that. They did however show an optional accessory that slides inbetween the viewfinder and the camera and allows the viewfinder to tilt up and also rotate from side to side – particularly handy if you’re in a tight spot. I also like that you can remove the viewfinder altogether and shoot with the screen alone if you want to reduce the size and weight. 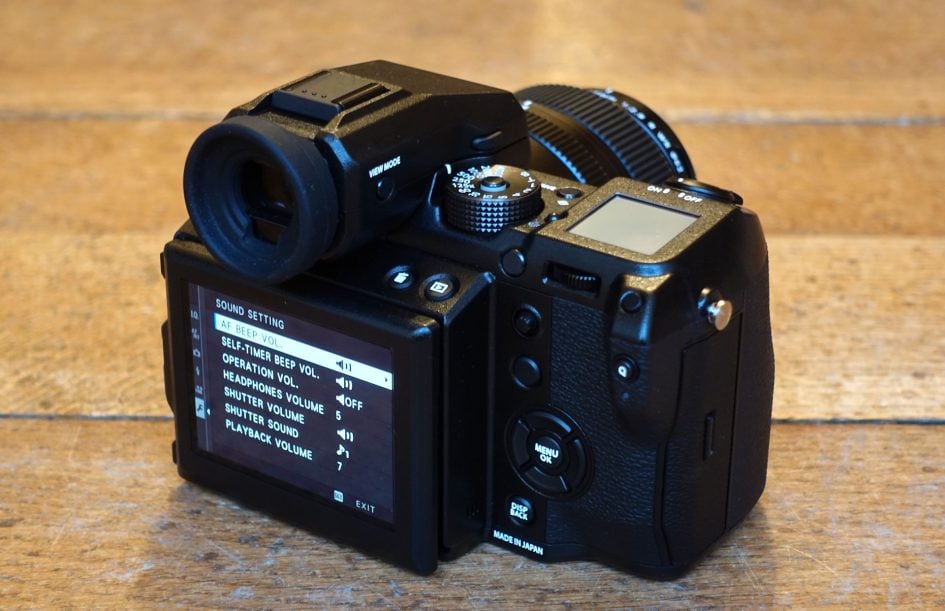 Speaking of the screen, the GFX 50S is equipped with the same panel and mounting as the XT2. As such it’ll tilt up and down vertically, but also hinge out to the side for easier framing in the portrait orientation; interestingly though, it just uses a button rather than the slider lock of the XT2 to release this axis. The screen is also touch-sensitive.

On the left side you’ll find a number of flaps covering a plethora or ports. The pre-production sample I tried featured USB, HDMI, microphone and headphone jacks and a power input; it also features twin SD memory card slots. The battery slides in from the side too and is a chunky unit; the battery spec is rated at about 400 shots. There’s also built-in Wifi with the same smartphone controls as existing X-series products, allowing you to remote control, wirelessly transfer images or geo-tag them. There’ll also be a tethering solution at launch, as you’d hope for a camera that’ll be at home in many studios.

Inside is the brand new CMOS sensor designed by Fujifilm with specially shaped micro-lenses and an optimized silicon process; due to the size it employs a traditional Bayer colour filter array rather than the company’s own X-Trans design. The GFX format defines a sensor size of 43.8×32.9mm and the first model delivers 51.4 Megapixel images with 8256×6192 pixels. Numerically this is essentially the same as the full-frame Canon EOS 5DS(r), and it’s also not a huge leap on from the 42 Megapixels of the Sony A7r Mark II, but thanks to the larger sensor area, the pixels are larger (so lower noise and higher dynamic range), the pressure on the resolving power of the lenses is lessened, and of course there’s a different perspective for the same field of view. Fujifilm didn’t quote a burst rate but said it should be similar to the Pentax 645.

In front of the sensor is a focal plane shutter, the first time one has been deployed on a medium format mirrorless. This means no need for leaf shutters in the lenses, which in turn makes them simpler and smaller. It also allows the body to offer shutter speeds up to 1/4000, and judging from the model I tried, the mechanical shutter sound is pretty quiet. That said, it will be possible to use the GFX 50S with leaf-shutter lenses and while I didn’t get the impression there’d be any native ones anytime soon, there are lots of opportunities to adapt other models.

The GFX format has a very short flange-back distance of 26.7mm and can accommodate an even shorter minimum back-focus distance of 16.7mm. This means the rear element of lenses can be just 16.7mm from the sensor’s surface, allowing flexible optical designs, that are especially beneficial for wide-angle lenses.

There’s no embedded phase-detect AF on the sensor, so autofocus is entirely contrast-based. That said, it still felt quite snappy on the pre-production sample I tried, with the handling experience feeling similar to many X-series bodies. Indeed with many controls, menus and composition inherited from the X-series, any existing owners will feel right at home. As one of them, I can’t wait to get my hands on the GFX 50S and put it through its paces. It’s a very welcome development that complements the X-series and is a perfect fit for Fujifilm. Next check out my sample images! 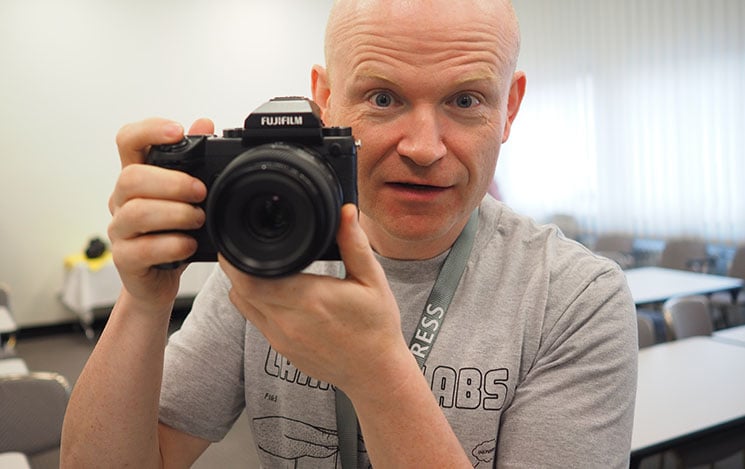 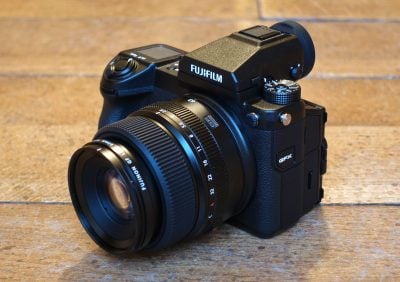 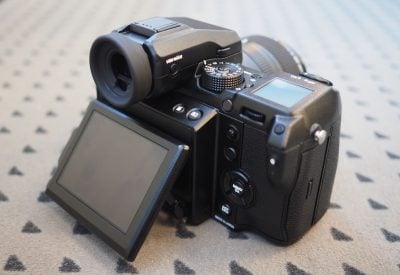