The Fujifilm FinePix XP140 is a capable mid-priced rugged waterproof compact boasting a 25m depth rating that not many can beat (The 30m Nikon W300, since you ask). It’s equipped with a 5x 28-140mm zoom which, again, is longer than you’ll find on most waterproof compacts. Its picture quality is good, albeit not as good as the more expensive Olympus TOUGH TG-6, and it has a wide range of video modes – though its new 4K/15p mode is a bit of a let down. It’s a solid performer, looks great and is well designed, though the screen could do with being brighter. In truth, it’s outclassed by the, admittedly much more expensive TOUGH TG-6 and while the cheaper Nikon COOLPIX W150 lacks many of the XP140's advanced features, it does wireless image transfer much better. Overall though, the Fujifilm XP140 is a solid waterproof camera at an attractive mid-range price, but do keep an eye on the price of the previous FinePix XP130 which does almost everything the newer model can but with potential discounts.

Check prices on the Fujifilm FinePix XP140 at Amazon, B&H, Adorama, or Amazon UK. Alternatively get yourself a copy of my In Camera book or treat me to a coffee! Thanks!

The Fujifilm Finepix XP140 is a rugged waterproof compact that can be taken to a depth of 25 metres, operates in temperatures down to -10C and can be dropped from a height of 1.8m with no ill effects. Launched at the beginning of 2019, the XP140 is Fujifilm’s regular annual update to its XP waterproof model, the XP130 was released a year earlier and the XP120 in early 2017.

The new model retains the 5x zoom and 16 Megapixel sensor of its predecessor in a body that looks very similar. In addition to improved waterproofing which adds 5 metres to the depth of the older model, the headline feature is a new 4K video mode. But before you get too excited about that, I’ll tell you straight away that with a maximum 15fps frame rate, you won’t be using it to capture action footage, or much else for that matter.

The good news is that the XP140 retains the 1080/50/60p and 720/50/60p and adds 24fps video at 1080 and 720 resolutions in addition to a new square video mode. The XP140 also upgrades its predecessor’s low resolution slow motion video modes to 720p HD resolution. Other new features include a boosted maximum ISO sensitivity of 12800 ISO, a new Face auto self-timer mode and new ‘Rich & Fine’ and ‘Monochrome (NR)’ filters.

As before, the Finepix XP140 is equipped with WiFi and Bluetooth and can transfer photos to you phone in the background while you shoot. To find out more about that and the Finepix XP140’s other features; and to see how it measures up against the pricier Olympus TOUGH TG-6 and the cheaper Nikon COOLPIX W150 – both in and out of the water – read on! 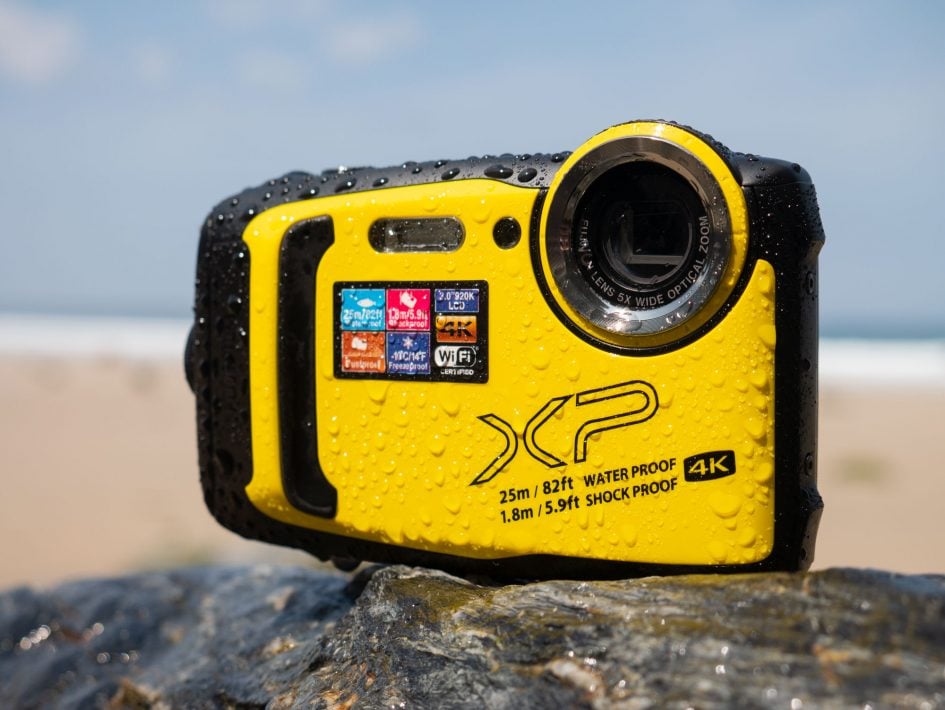 The Finepix XP140 is a chip off the old block – near identical to its predecessor and the XP120 before that. Which is no bad thing because it looks stylish and is also a very practical design. You can get a firm grip on it with one hand, but need to be careful not to obstruct the lens if using both. 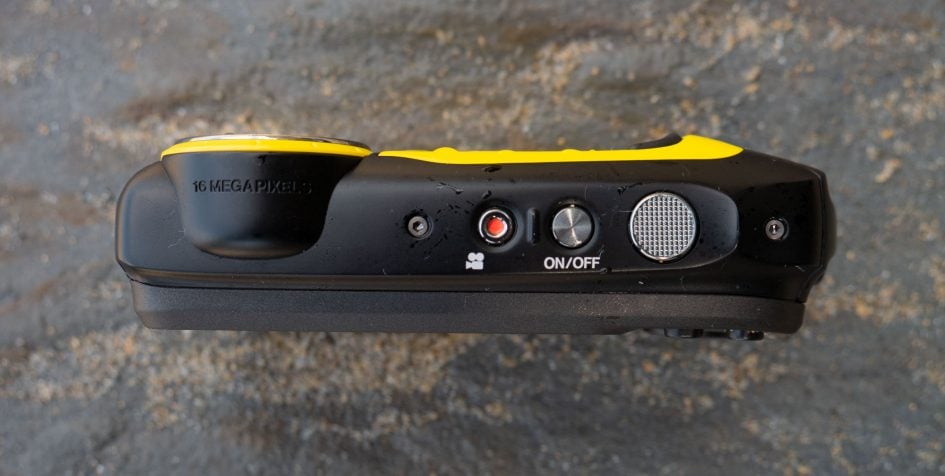 The button layout on the top is also unchanged with a nice big shutter button that’s hard to miss. On the right as you’re looking at it there’s a sealed door to the battery, card and ports compartment. It has an excellent locking system which is more secure than the single latched door on the COOLPIX W150 and less fiddly than the two small latches on the Olympus TOUGH TG-6 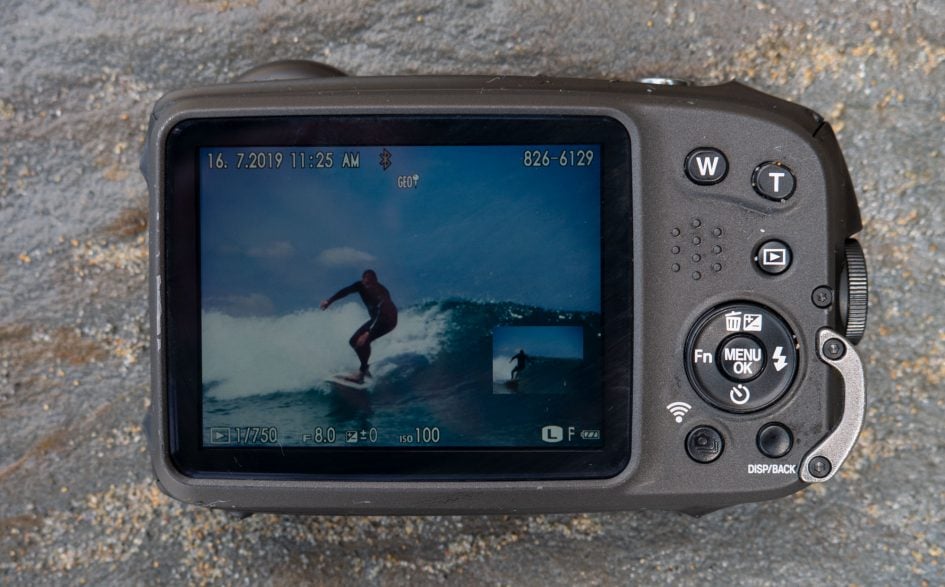 Round the back you’re looking at the same 3 inch 920k dot screen as the earlier XP130. It’s big enough and detailed, but not very bright and I had a real job seeing it in bright sunlight. That, of course, is something all cameras suffer from, but the XP140 is worse in this respect than the TOUGH TG-6, which has a 3 inch slightly more detailed 1040k dot screen and the smaller, lower resolution screen on the COOLPIX W150. One thing that is different here is the function button on the four way controller. That, and the other buttons can be programmed to one of a number of functions including ISO, white balance, focus mode and movie mode. 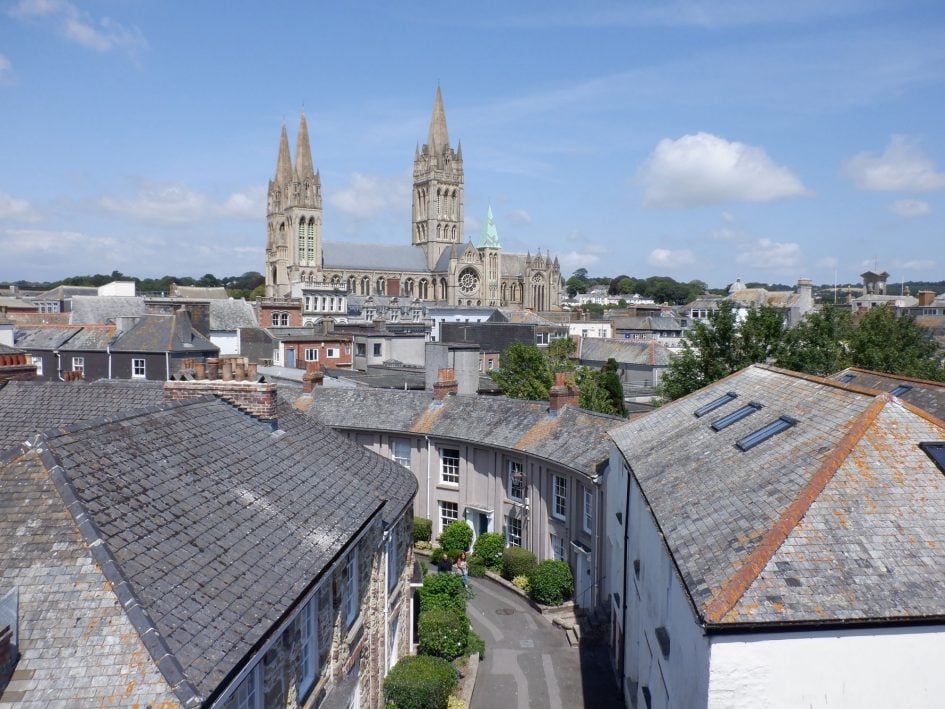 Here’s the angle of view you get with the Finepix XP140 at its maximum 28mm wide angle setting. It’s a little bit wider than the 30mm COOLPIX W150 and not quite as wide as the 25mm TOUGH TG-6. I tried the earlier XP130 attached to my surfboard, but the angle of view wasn’t wide enough to fit me in and interestingly Fujifilm has dropped Action camera mode on the new model. That said, it’s plenty wide enough for group shots and small interiors. 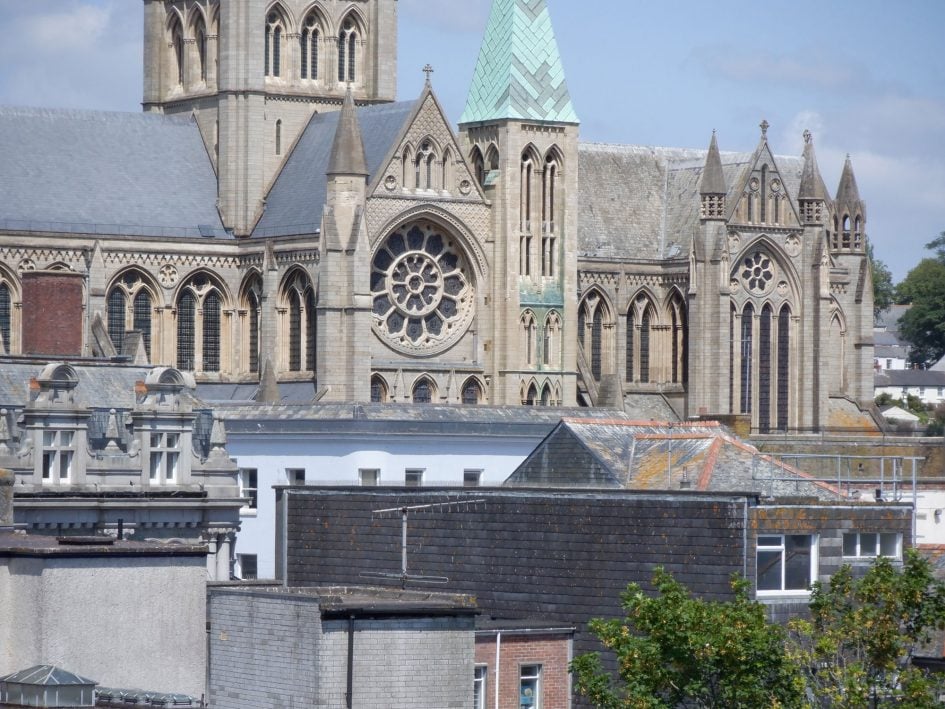 Where the XP140 really delivers is at the telephoto end of the zoom range. With a 5x range of 28-140mm it has one of the longest zooms of any waterproof camera and will get you a fair bit closer to the action than the 100mm TOUGH TG-6 or the 90mm COOLPIX W150. But don’t expect to be filling the frame from vast distances, you’ll still need to be within shouting distance of your subject to get a good shot. 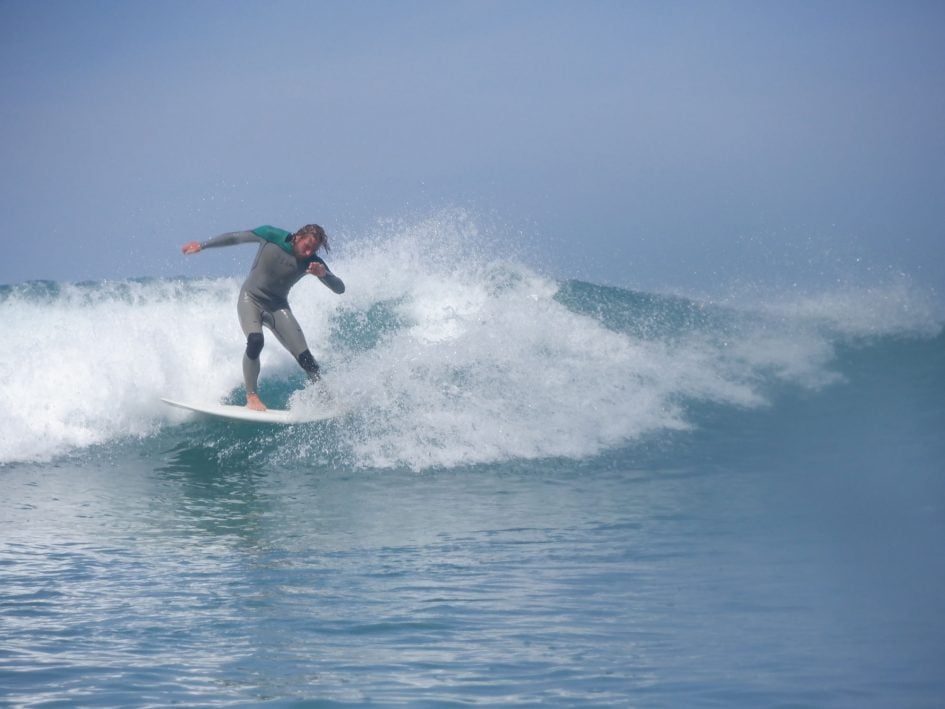 Speaking of which, here’s a shot of a surfer taken in the water with the lens fully zoomed in from I’d guess about 20 metres. In program auto mode you get three focus mode choices, area AF, centre AF and tracking and of those, centre AF is your best bet for subjects like this. The XP140 got it right about half of the time, but the TOUGH TG-6 came out top for autofocus reliability in these conditions. 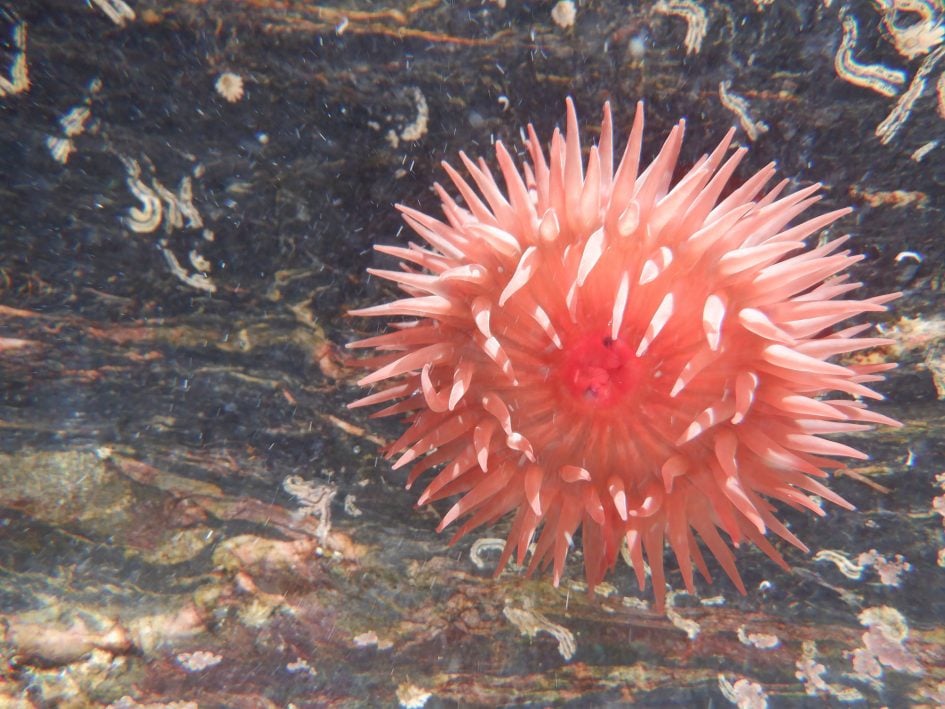 The Finepix XP140 has an underwater scene mode – which I used for this shot. You can also shoot in Program Auto and set the white balance to underwater, or could, theoretically, leave the white balance on auto. One other thing to note here, the specification will tell you the Finepix XP140 close focusing distance is 9cm, but in practice I got much closer than that – around 4cm. There’s no longer an underwater macro mode as on the earlier XP130, but that clearly doesn’t affect your ability to get in close. So the Finepix XP140 does ok for macro shot’s but if you like to get in really close, you can’t beat the microscope modes on the TOUGH TG-6. 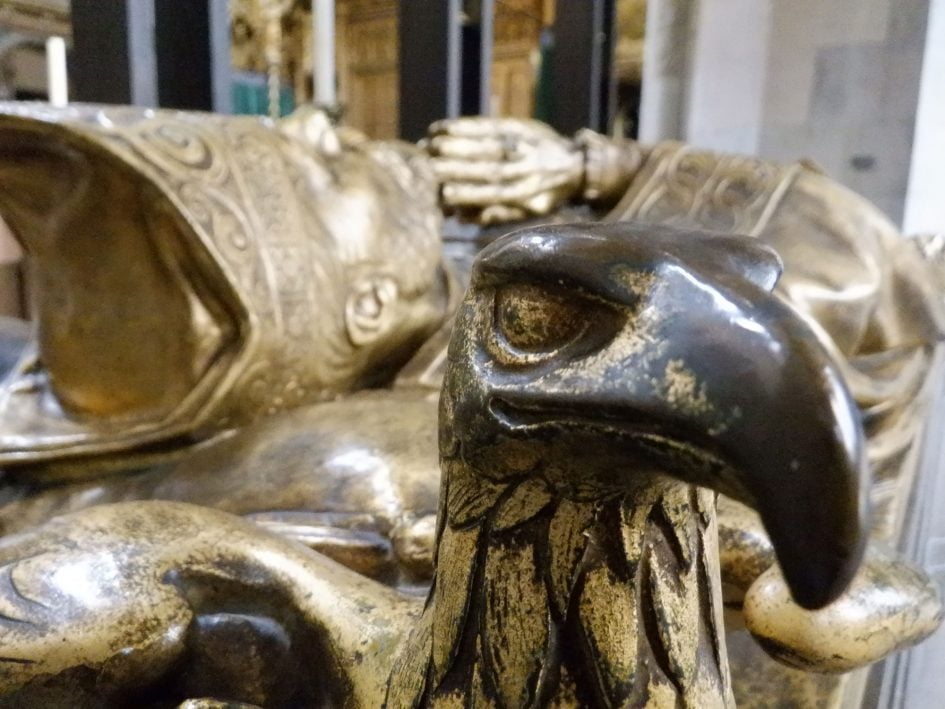 The Finepix XP140’s 28-140mm zoom has a maximum aperture of f3.9 at the 28mm wide angle, closing to f4.9 when full zoomed in. The shot above shows how much you can blur the background if you get pretty close to the subject and the automatic exposure chooses f3.9 – which it will in low light. Not much, is the answer. 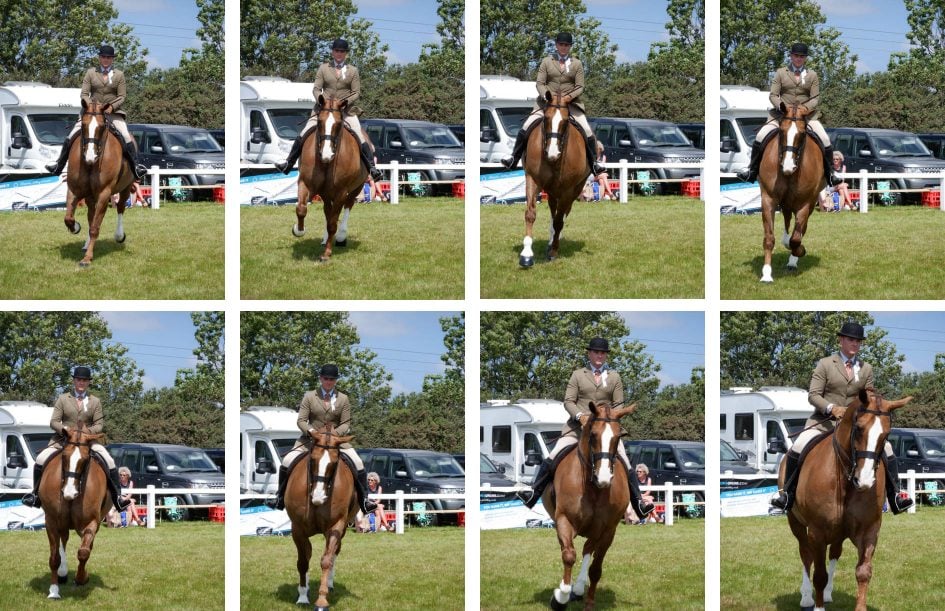 The earlier XP130 could shoot a one-second ten frame burst of full resolution high quality JPEGs. The XP140 specifications say that’s reduced to a maximum 6 frames at 10fps, however I managed an 8-frame burst which you can see above. You can also shoot indefinitely at a lower rate of 3fps. The XP140 continuous shooting is a little better than the COOLPIX W150’s short 5fps burst, but if it’s fast, reliable continuous shooting in a rugged compact you’re looking for, the TOUGH TG-6 is what you want. 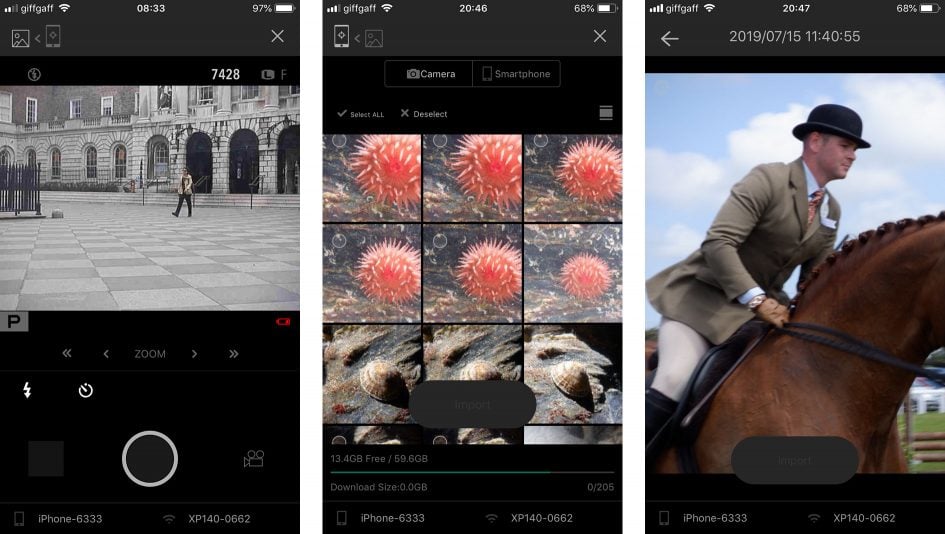 Like the COOLPIX W150, the FinePix XP140 has both WiFi and Bluetooth and can transfer photos to your phone in the background while you shoot. However, unlike the COOLPIX W150, the XP140 doesn’t make the process seamless. It rarely succeeds in transferring photos without some kind of human intervention and even then isn’t always successful. I ended up turning the auto transfer feature off and just using the WiFi to download images to my phone in the more usual fashion. 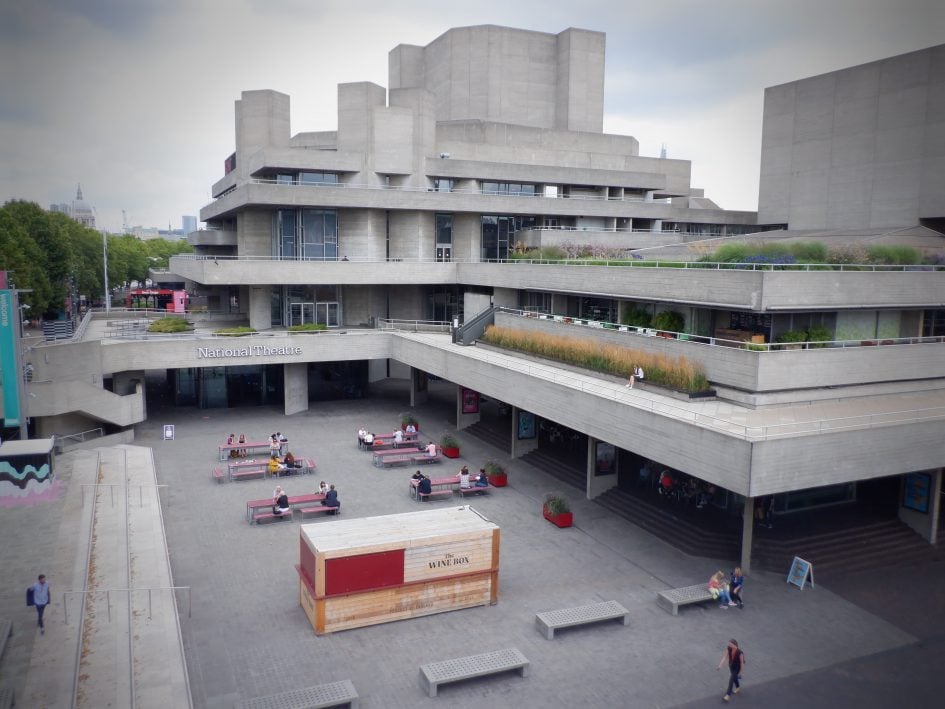 Here’s an indoor panning clip from the FinePix XP140. The exposure over corrects a little during the pan and it also looks a little bit noisy, but the colour balance is good and the stabilisation irons out the wobbles well.

For this underwater shot I set the FinePix XP140 to its 1.6x slow motion mode, so the action here is a little under half real time speed. Other modes on offer are 2x, 3.3x and 4x. All record at 720p size and 100fps. Note there’s no audio with these modes.

Finaly, here’s the XP140’s 4k video mode which records at 15fps. As you can see, the action at this low frame rate is far from smooth so if you plan to shoot moving subjects, and with video that’s pretty much a given, you’ll get much better results with one of the 1080p modes.

Check prices on the Fujifilm FinePix XP140 at Amazon, B&H, Adorama, or Amazon UK. Alternatively get yourself a copy of my In Camera book or treat me to a coffee! Thanks!
Pages: 1 2 3 4 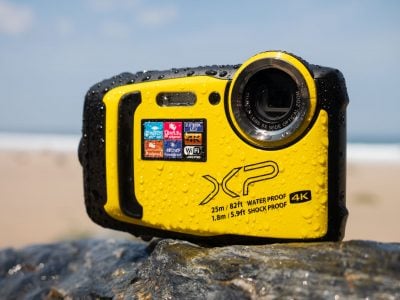 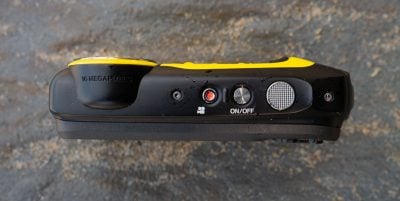 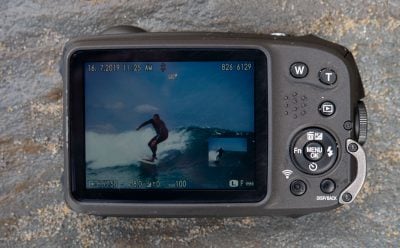