The Fujifilm XP130 is mid-priced rugged waterproof compact that combines ease of use with some advanced features all wrapped up in a stylishly designed body. An update to the year-old XP120, it adds Bluetooth to the existing Wifi connection allowing automatic wireless downloading of images to a phone, tablet or computer while you shoot. In practice, though, the Bluetooth is more than a little clunky and a poor second to Nikon's Snapbridge, which does the same thing on its COOLPIX W300 and W100 models, only better. Other improvements include longer battery life, a new electronic level gauge and eye-detect autofocus. The XP130 inherits it predecessor's wealth of shooting modes and is waterproof to a depth of 20 metres - deeper than you're likely to want to go without specialist diving equipment. It's freezeproof to -10C and can withstand a drop from 1.75m. All-in-all it's a capable waterproof compact, but until Fujifilm makes a better job of the Bluetooth connectivity, the older XP120 offers much the same capabilities at a lower price. It's also worth considering the budget Nikon COOLPIX W100, or, if you want to spend a little more, the Nikon COOLPIX W300 and Olympus Tough TG-5.

Check prices on the Fujifilm FinePix XP130 at Amazon, B&H, Adorama, or Wex. Alternatively get yourself a copy of my In Camera book or treat me to a coffee! Thanks!

The Fujifilm XP130 is a rugged waterproof compact with a 5x zoom lens and a 3 inch fixed LCD screen. Launched in January 2018 it supercedes the year-old XP120, the main update being a Bluetooth connection which streams photos to your phone, tablet, or computer while you shoot. Fujifilm’s XP updates typically take small steps and there’s not much else that’s new. That said, the new XP130 enjoys slightly longer battery life with 240 shots from a full charge compared with 210 on the XP120; there’s also a new electronic level display and eye detect autofocus.

Like the XP120 before it, the XP130 has a 16.4 Megapixel sensor and can shoot continuously at full resolution up to ten frames per second for a one-second burst. It can shoot full HD video at 1080 / 60p resolution and has a range of interval shooting and time-lapse features. As well as the Bluetooth connection it has WiFi, allowing manual transfer of photos and video from the camera to your smartphone as well as remote shooting using the Fujifilm Camera Remote app.

The XP130 is Waterproof to a depth of 20 metres, freezeproof to -10C and can withstand a drop from height of 1.75 metres. That’s 5 metres deeper then the more expensive Olympus Tough TG-5; if you want to go deeper than 20 metres you’ll need the Nikon COOLPIX W300 which will get you down to 30 metres.

Read on to discover how the XP130 performs in and out of the water and how it compares with other popular rugged waterproof compacts like the Olympus Tough TG-5 and the Nikon COOLPIX W300. 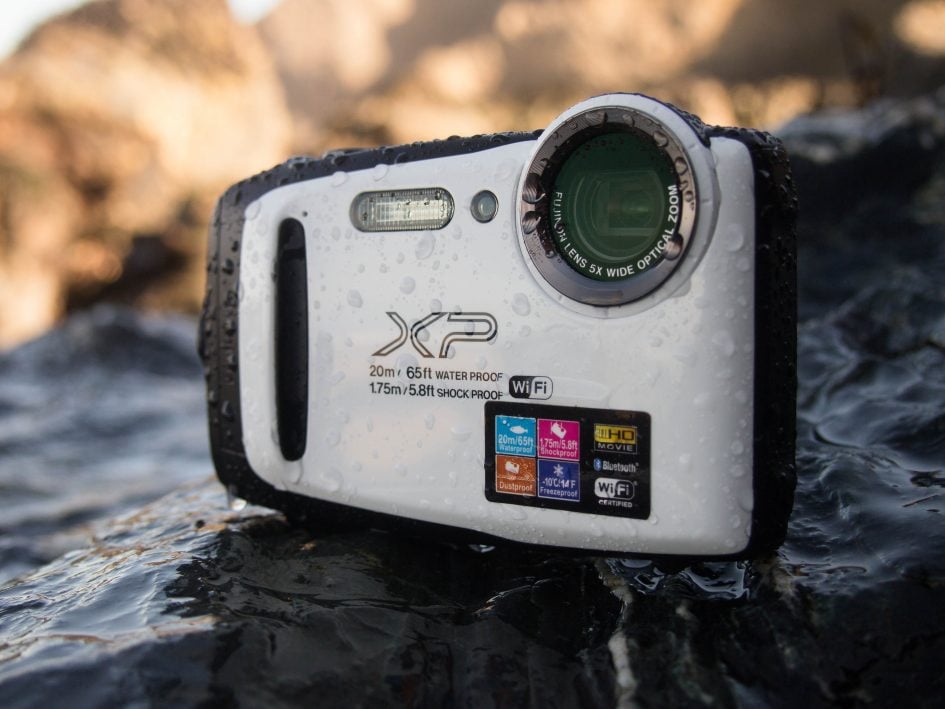 The XP130 is virtually identical in appearance to the earlier XP120. It’s available in white, dark silver, yellow, sky blue and lime and looks modern and stylish in any of those colours. The body shape – with the lens mounted top left and a moulded grip on the right – makes for a pretty secure grip whether you’re using one hand or both. 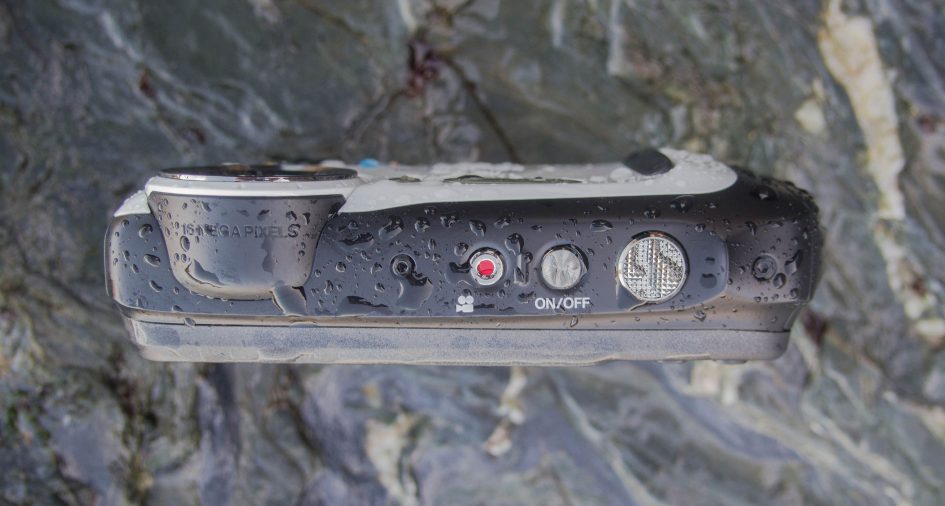 On top there’s a big shutter button with a knurled surface; a raised dimple between the on/off and movie record buttons helps you locate them by touch alone. The shutter button could be a bit more responsive, the difference between a half and full press, particularly when your hands are cold and/or gloved, isn’t much, so trying to lock focus can be tricky. Though to be fair that’s a criticism you could make of many of the XP130’s competitors. 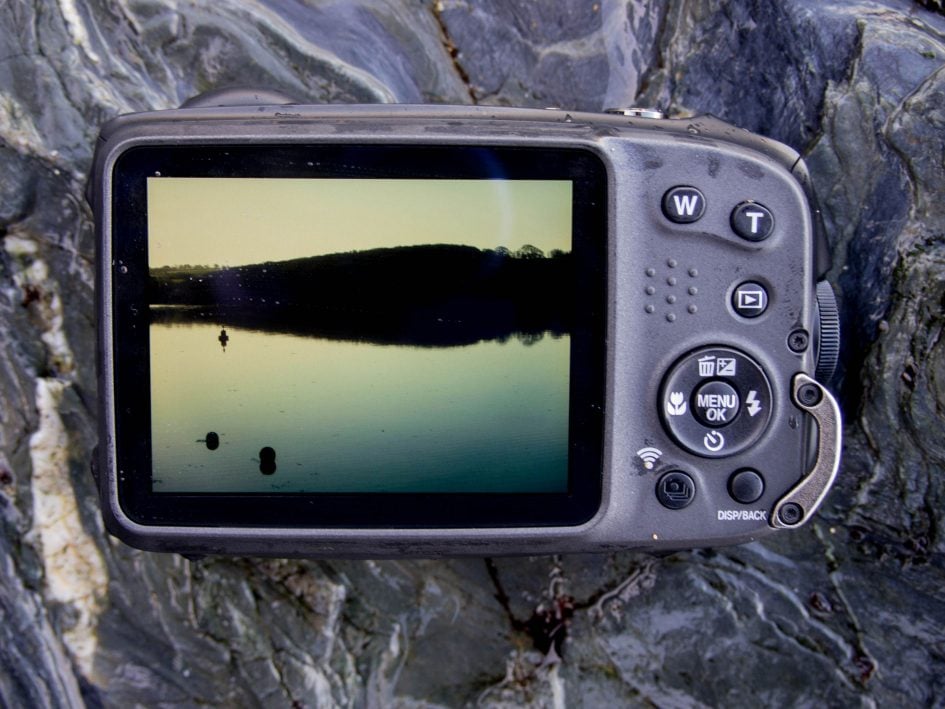 I managed to operate the XP130’s other controls pretty well in cold water wearing neoprene gloves – I could zoom, shoot stills and movies, and change settings, but the playback controls proved a bit too fiddly. The supplied strap isn’t really suited for use in the water or rugged environments so you might want to thiink about getting one you can tighten around your wrist. 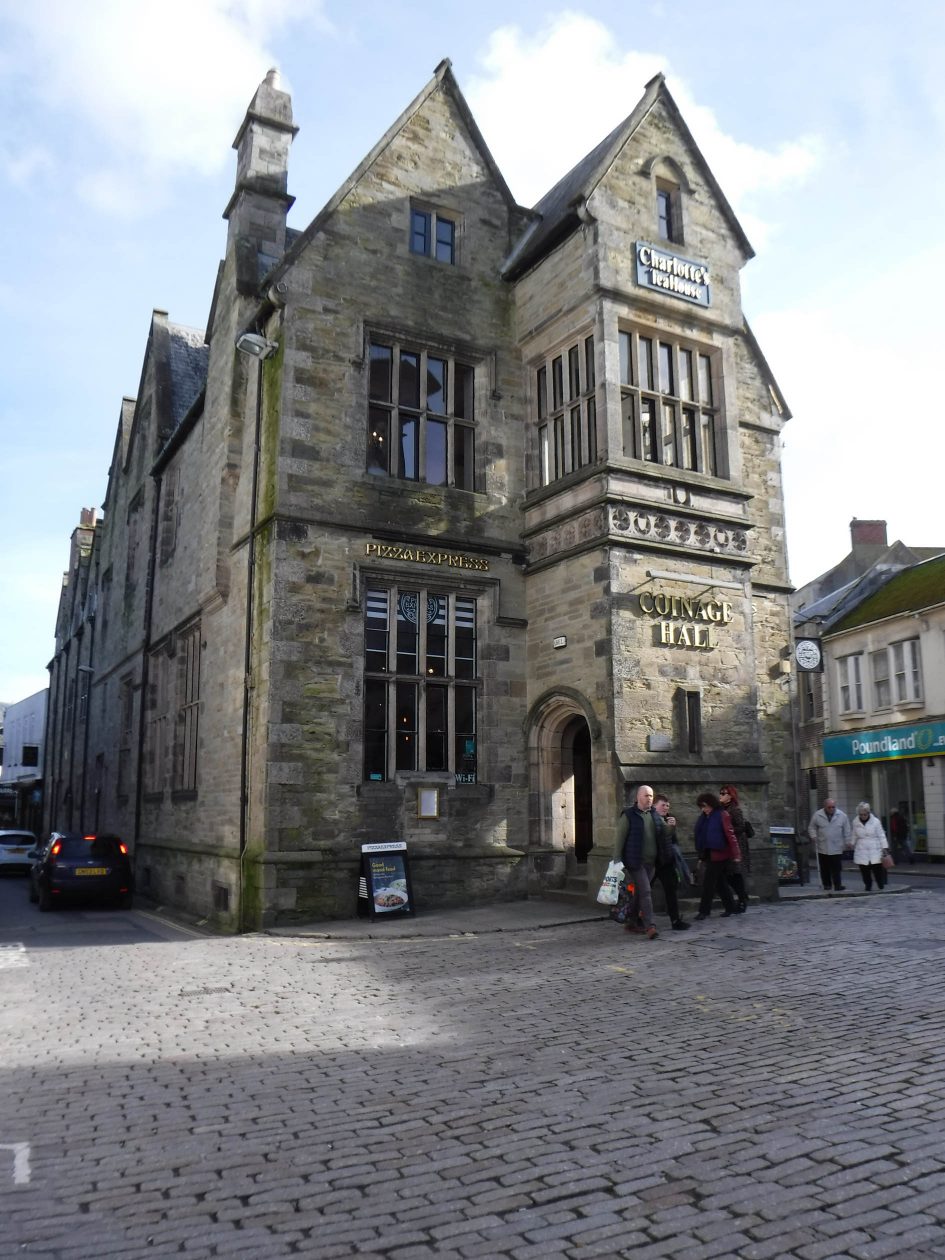 The XP130 inherits its predecessor’s 5x zoom which has a 35mm equivalent range of 28-140mm. That’s a good range to have at your disposal but not quite wide enough for action selfies in all circumstances. When I attached the XP130 to the front of my surfboard, I couldn’t capture my full height. That said, the Action Camera mode combined with interval shooting generally works well for this kind of thing. If you’re looking for a rugged compact with a wider field of view the Olympus Tough TG-5 with its 25-100mm zoom is a better option, though it’s 4x zoom tops out at 100mm, well short of the XP130’s 140mm. 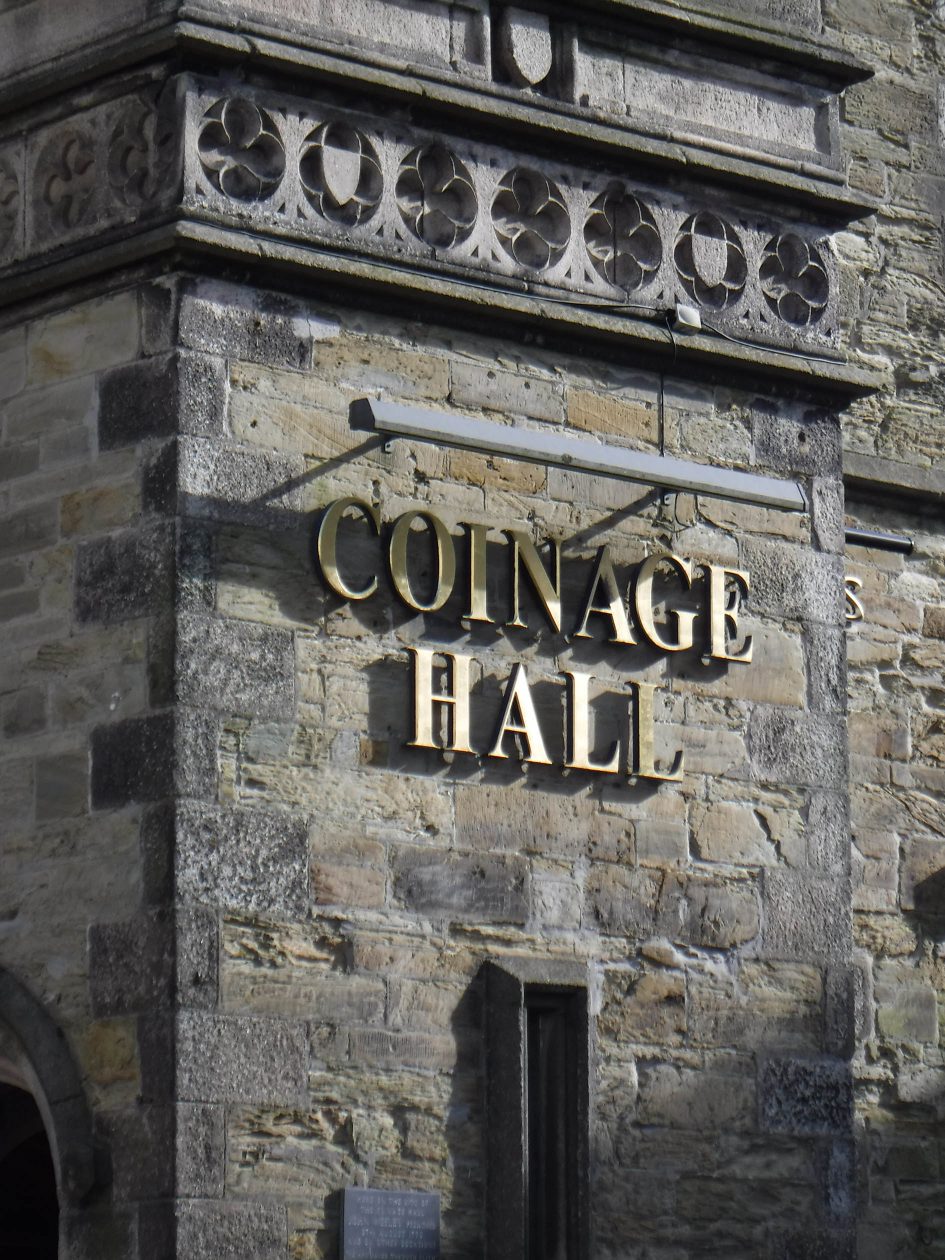 Here’s the field of view at the Fujifilm XP130’s maximum 140mm telephoto. If you’re thinking a 5x zoom sounds modest, because waterproof zooms need to be enclosed they have a shorter range than non-waterproof mdels. The Nikon COOLPIX W300 also has a 5x range, starting at a wider 24mm and extending to 120mm; and, as I’ve mentioned, the Olympus Tough TG-5 has a 4x 25-100mm range. The other thing to consider here is maximum aperture, which on the XP130 is f3.9, closing to f4.9 when fully zoomed in. Even the budget COOLPIX W100 has a wider f3.3 maximum aperture (though its 3x zoom closes to f5.9 when zoomed in). The COOLPIX W300 has a bright f2.8-4.9 lens and the Olympus Tough TG-5’s is even brighter at f2-f4.9. A wider maximum aperture allows you to shoot with a faster shutter speed to capture action, or select a lower ISO sensitivity setting for better quality photos. 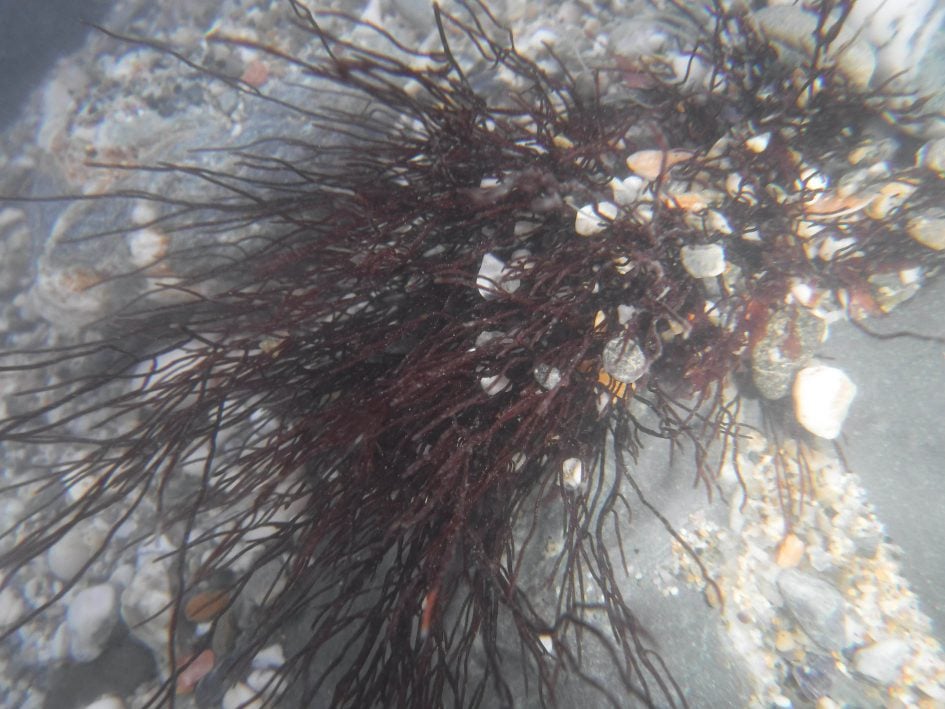 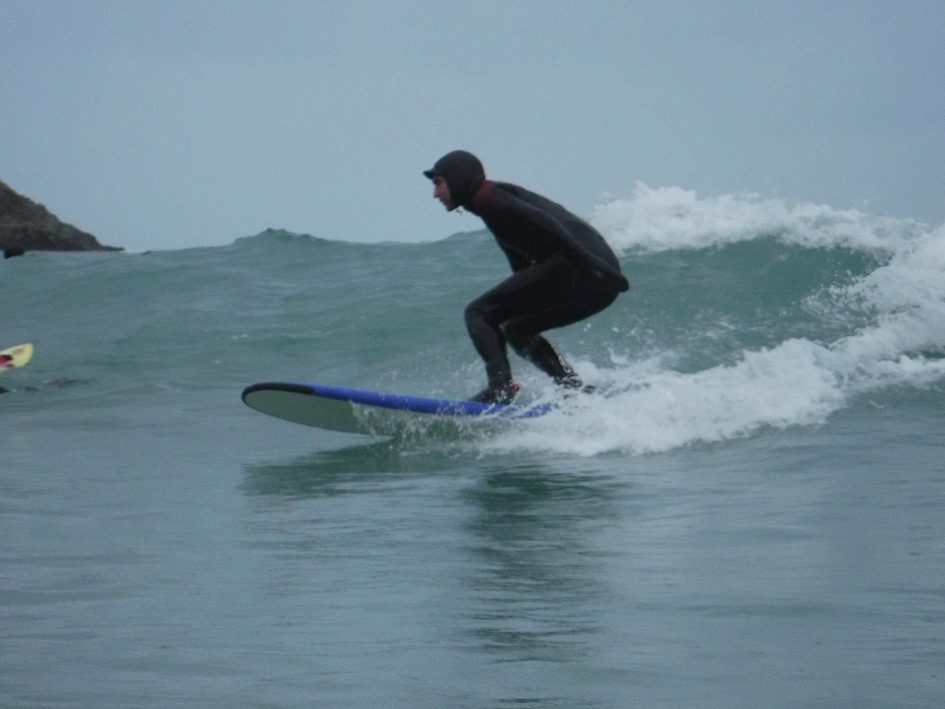 The XP130 can shoot a one second burst of images at 10fps, making it pretty good for capturing action, though you have to time your burst carefully. The new eye detect AF mode is great for portraits, but not much help for capturing subjects like this. The best method is to set the centre AF area and try to lock onto your subject in the middle of the frame before recomposing if necessary. Even in these overcast and raining conditions the XP130 did surprisingly well and always locked on when there was something in the AF area other than sea or sky. Like most other rugged compacts, the exposure and focus is locked on the first frame.

Above: Download the original file (Registered members of Vimeo only). This clip, like the others below was shot using the Fujifilm XP130’s best quality 1080 /60p HD video mode. There’s a 30p option at this quality as well as 720 /60p. There are also three high speed (slow motion) modes that trade off resolution for slower playback. The best quality is 640 x 480 and records at 120 fps for 1/4 speed playback at 30fps. There’s also a 320 x240 /240fps and a 160 x 120 320fps mode for playback at 1/8th and around 1/10th speeds respectively. The quality is good, the stabilisation is steady and the zoom motor is inaudible, though there’s some noticeable stepping in the exposure,

Above: Download the original file (Registered members of Vimeo only). For this second clip, I mounted the Fujifilm XP130 on a tripod and disabled the stabilisation. In the absence of environmental noise you can just about hear the zoom motor; and the autofocus is a little jittery during the zoom, but the quality looks very nice and the XP130 makes a good job of the exposure.

Above: Download the original file (Registered members of Vimeo only). For this clip I set the XP130 to underwater macro mode. It does a good job in slightly murky conditions, though the microphone seems to be quite sensitive to camera knocks when below the surface. 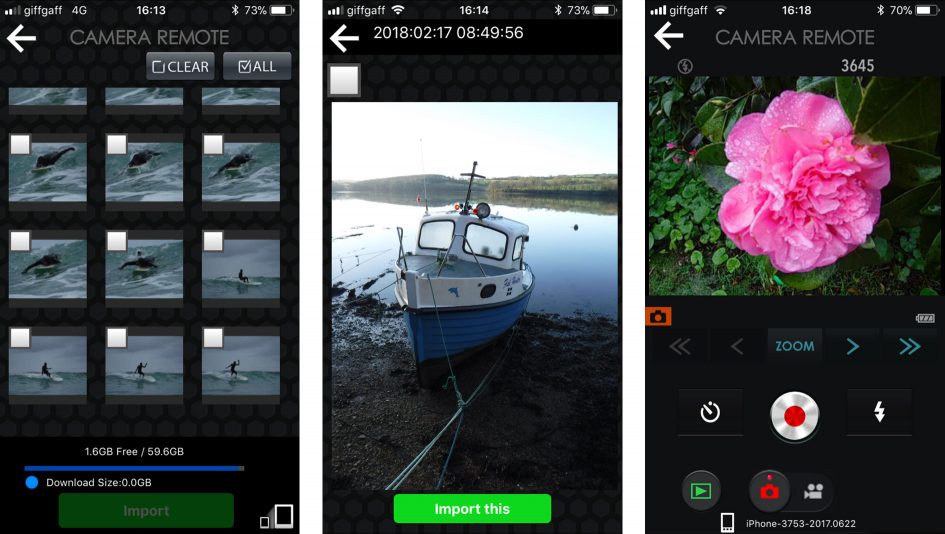 The XP130 has both Bluetooth and WiFi for connecting to a smartphone, tablet or computer to download images or wirelessly operate and shoot. Auto download transfers photos in the background while you shoot providing the Camera Remote app is running on your device. The Bluetooth connection is used to communicate, but the image download happens over WiFi, so you need both Blutooth and WiFi active and connected for this to work. In practice I found this almost impossibly tricky as the camera was prone to terminate the WiFi connection at any opportunity and images only ever downloaded when I switched it off at the end of a session – at which point the app on my phone prompted me to switch the WiFi connection back to the camera. It’s all just to much hassle, Nikon’s Snapbridge – which does a similar thing on the W300 and budget W100 works much better.

Fujifilm quotes a 9cm close focus distance for the XP130 in macro mode, but I was able to get sharp images within half that distance – as close as 4cm from the subject. That’s the distance the shell in the above image is from the XP130’s lens which is set to the 28mm maximum wide angle. 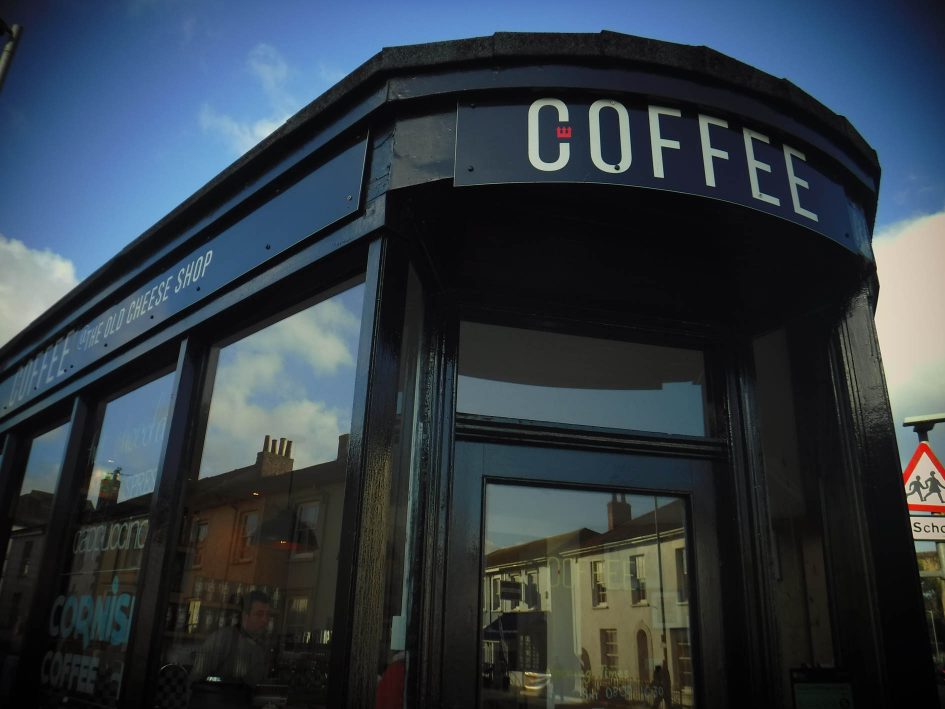 The XP 130 offers a good range of effects filters accessed from the shooting mode menu. This one is Toy Camera; you can also choose from Miniature, Pop colour, High-key, Low-key, Dynamic Tone, Fish-eye, Soft-focus, Cross Screen, Sketch and a variety of partial colour effects.

Check prices on the Fujifilm FinePix XP130 at Amazon, B&H, Adorama, or Wex. Alternatively get yourself a copy of my In Camera book or treat me to a coffee! Thanks!
Pages: 1 2 3 4 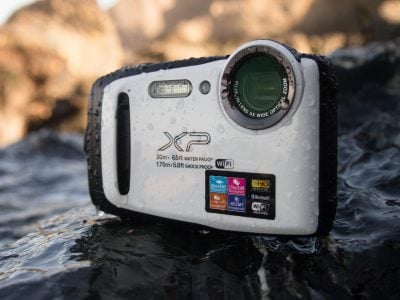 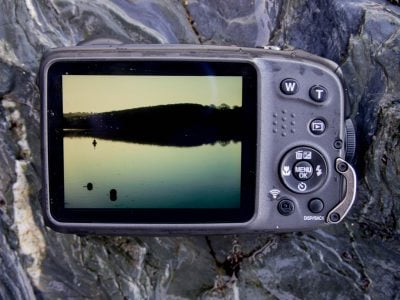