To compare real-life performance I shot this scene with the Canon PowerShot SX700 HS, Panasonic Lumix TZ60 / ZS40 and the Sony Cyber-shot HX50V within a few moments of each other using their best quality JPEG settings.

I’d previously determined that the best results on the PowerShot SX700 HS were produced at f4, so for this test all three cameras were set to f4 in Aperture priority mode. Image stabilisation was turned off and the camera settings were otherwise left on the defaults.

The image above was taken with the Canon PowerShot SX700 HS. The camera was set to Aperture priority mode and at f4 with the sensitivity set to 100 ISO the PowerShot SX700 HS selected a shutter speed of 1/640. The Lumix TZ60 / ZS40, also set to f4 at 100 ISO metered a shutter speed of 1/400 and at its base 80 ISO sensitivity, the Sony HX50V selected an exposure of 1/500 at f4. As usual the crops are taken from the areas marked in red above.

Overall, the crops from the PowerShot SX700 HS show a good level of detail with nice clean edges. However, the first crop, which is from close to the left edge of the frame is the exception. The detail is a little soft, edges look slightly fuzzy and the subtle textures in the trees at the bottom of the frame aren’t holding up very well. On the upside, there’s no evidence of colour fringing and this edge crop is the worst of the set.

Moving on to the second crop from closer to the centre of the frame, here there’s visibly more detail and the edges are much sharper. Similarly in the third crop, you can make out the weather vane on the church tower as well as some of the window detailing. You can’t really make out the finer detail in the stonework of the church, but you can just about see the hands of the clock which reads twenty past four. In the final crop the lighthouse is a distinct white cylinder and you can see some detail on the island it occupies. Overall I’d say this is a very positive result for the SX700 HS.

Like the PowerShot SX700 HS, the Lumix TZ60 / ZS40 puts its worst foot forward with a crop from the frame edge that that looks so fuzzy you’d be forgiven for thinking camera shake was to blame. Even larger detail is hard to make out and the edges are a blur. But the next crop from closer to the middle of the frame shows a dramatic improvement with nice crisp edges and a good level of detail. You can make out the hands on the church clock, but not quite as distinctly, if that’s the word, as in the SX700 HS crop. In the final crop the lighthouse and island lack the definition of the SX700 crop alongside. So a question mark over the edge performance of the TZ60 / ZS40’s zoom lens at close to the maximum wide angle setting, but an otherwise good performance, albeit not quite up to the high standard set by the PowerShot SX700 HS.

The Sony HX50V performs comparatively well at the edge of the frame with a first crop that has cleaner edges than either the PowerShot SX700 HS or the Lumix TZ60 / ZS40. Again, things improve in the two crops from closer to the middle of the frame and there’s very little quality difference between the three cameras here. The detail from the 20.4 Megapixel Sony sensor is a little bigger than that of the 18.1 Megapixel Lumix TZ60 / ZS40, which is in turn a little larger than the crops from the 16 Megapixel PowerShot SX700 HS. Try as I might, though, I can’t see any more detail in the Sony crops. Finally the HX50V takes a bit of a dip at the end with a lighthouse that’s only just visible.

Scroll down the page to see how these models compare when zoomed in to 170mm and at their maximum zoom ranges. Alternatively, to see how they compare at higher sensitivities check out my Canon SX700 HS noise results. 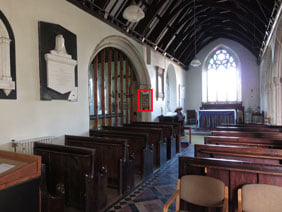 To compare noise levels under real-life conditions, I shot this scene with the Canon PowerShot SX700 HS, Panasonic Lumix TZ60 / ZS40 and Sony Cyber-shot HX50V within a few moments of each other using their best quality JPEG settings at each of their ISO sensitivity settings.

I’d previously determined that the best results on the PowerShot SX700 HS were produced at f4, so for this test all three cameras were set to f4 in Aperture priority mode. Image stabilisation was turned off and the camera settings were otherwise left on the defaults.

Just to remind you that the three sensors we’re comparing in the PowerShot SX700 HS, the Lumix TZ60 / ZS40 and the Cyber-shot HX50V have resolutions of 16, 18.1 and 20.4 Megapixels respectively, so the crop area becomes smaller and the detail is bigger as you go from left to right in the table below.

Moving onto the crops, the first 100 ISO crop from the PowerShot SX700 HS looks very respectable. There is a little noise texture here but it’s pretty unobtrusive, most noticeable in areas of flat colour, and doesn’t obscure any detail. At 200 ISO there’s visibly more of it, enough to start nibbling at the edges of image detail – for example along the top of the top of the sign that says ‘Euchristic prayer’. It’s still at acceptably low levels, though, and while it takes a another step up at 400 ISO the noise reduction copes well with a slight softening and loss of contrast as a result.

Things are starting to look a little blocky at 800 ISO and at 1600 ISO there’s a pervading graininess that’s beginning to degrade edges as well as medium sized detail. The grain has a natural look to it though and there’s still plenty of detail to see even in the 3200 ISO crop. While the SX700’s top 3200 ISO setting looks distinctly blotchy at 100 percent at smaller sizes it looks perfectly passable – for once a top ISO senstitivity setting that can be relied upon for more than the usual low-light emergencies. All in all, this is an excellent reult for the PowerShot SX700 HS.

The Lumix TZ60 / ZS40 base 100 ISO crop looks significantly less noisy than the PowerShot SX700 HS and in the lower range – up to 400 ISO it looks to me like the Lumix TZ60 / ZS40 has the edge. From 800 ISO up though, the tables are turned and it’s the PowerShot SX700 HS that comes out on top. Whether this is due to sensor performance or better noise reduction on the SX700 HS, at the higher sensitivities its images look less grainy and retain more detail.

The HX50V has a lower 80 ISO base sensitivity setting which looks more or less noise free and slightly superior to the 100 ISO crops of the other two models. At 100 ISO it’s a different story though, there is visible noise, albeit low-level, but the HX50V 100 ISO crop looks slightly inferior to the other two. So the message for HX50V owners is to stick with the base 80 ISO sensitivity where possible. As you’d expect, as the sensitivity increases, so does the noise, but while the HX50V’s noise is qualitatively different – it looks clumpier and less grainy – I’d say it’s no worse than the SX700 HS up to 3200 ISO. And let’s not forget, the HX50V keeps on going, with a maximum sensitivity of 12800 ISO.

Al three models have composite modes that shoot a quick burst of images with the sensitivity set automatically and produce a low-noise composite shot. These are shown in the final row of the comparison table below though with each model choosing a different sensitivity it’s hard to draw quality comparisons. Generally though, all three produce a result with less noise than the single-shot ISO equivalent, though there’s also loss of detail due to smoothing.

Now head over to my Canon SX700HS sample images to see some more real-life shots in a variety of conditions, or head straight for my verdict.