To compare real-life performance at wide angle, I shot this scene with the Canon PowerShot G7X, and the Sony Cyber-shot RX100 Mark II and III within a few moments of each other using their base sensitivities and best quality JPEG settings. I tried every aperture setting and selected the sharpest result for the crops below.I composed diagonally to evaluate details in the corners of the frame. I additionally tested at 50mm, 70mm and 100mm, and you can find the results lower on this page. I also shot everything in RAW and will publish a RAW comparison once the G7X is supported in Adobe Camera RAW.I tested all three cameras at each of their apertures and found f4 to be a common sweet-spot, so that’s what I set each of them to in Aperture Priority. I then shot this scene at their lowest respective sensitivities and used each camera’s default image processing to see how their JPEGs compare under best-case scenarios. The crops as always are taken from the areas marked by the red rectangles in the thumbnail above right and presented here at 100%. The Canon G7X and Sony RX100 III show essentially the same image area as both share the same resolution and 24mm widest coverage. The older RX100 II starts at 28mm though, so shows a slightly tighter view with larger details. I’ve still included it here though to illustrate the relative sharpness at similar parts of the frame. Lower on this page you’ll see how they compare at matching focal lengths.

Looking at the crops below, the RX100 III is delivering the best result of the three cameras. There’s finer details resolved, most notably in the window frames, and especially on the crops taken from closer to the corners of the frame. The Sony is also delivering higher contrast, although this could be down to image processing, so we’ll have to compare RAW results to see what’s really happening. In the middle of the frame, I’d say they’re fairly evenly matched, but in the corners, the RX100 II enjoys an edge over the G7X – hardly the difference of night and day, but a visible one none the less.

With all three cameras zoomed to approximately 50mm equivalent, and again set to f4 in Aperture Priority, I’d say the G7X shakes-off any softness seen at 24mm and delivers arguably the best result of the three.

The crops from the G7X are very crisp here, across the entire frame, and while the RX100 III also looks very good, I’d say the Canon is visibly a little better. Meanwhile the older RX100 II looks relatively soft in comparison, lacking the bite of the newer models.

Scroll down to see how they all compare at 70mm, or head over to my Canon G7X noise results, have a look at my G7X sample images or skip to my verdict!

Next I zoomed all three cameras to 70mm – representing the maximum for the RX100 III – and again set their apertures to f4. This time I’d say it’s a repeat of what we saw at 50mm: namely that the G7X enjoys a slight lead over the RX100 III, delivering very crisp details across the entire frame, and that both models are noticeably superior to the older RX100 II.

So I’d say the RX100 III enjoys a small edge over the G7X when both are at 24mm, but that the G7X enjoys a small lead at 50mm and 70mm. Ultimately though from the results here I haven’t seen anything that would make me choose the G7X over the RX100 III or vice versa when it comes to optical quality, as they’re pretty closely matched. This is an impressive result for the Canon since it sports a range that extends 50% longer. The only optical compromise for the G7X seems to be the extreme corners at 24mm where details can become a little softer than the Sony RX100 III, but in the middle it looks fine and as soon as you start zooming the lens in, the Canon becomes crisp across the entire frame and enjoys a small but consistent lead over its rival.

Scroll down to see how they compare at 100mm, or head over to my Canon G7X noise results, have a look at my G7X sample images or skip to my verdict!

In my final comparison I zoomed the G7X and RX100 II to their longest focal length of 100mm – the RX100 III couldn’t take part here as it stops at 70mm. As before the G7X was set to f4, although this time the RX100 II had to use f4.9, as that’s the maximum aperture when zoomed-in for that model.

Here I’d again say the G7X is optically superior to the RX100 II, delivering crisper and more contrasty results, especially in the corners. So while the two models were fairly close in quality at their widest focal lengths, the Canon G7X leapt ahead at the mid and long-ends of the range. This is a great result for the G7X which delivers the same or better quality than the RX100 II despite sporting a brighter aperture.

Next head over to my Canon G7X noise results, have a look at my G7X sample images or skip to my verdict! 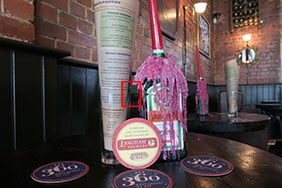 To compare noise levels under real-life conditions, I shot this scene with the Canon PowerShot G7X and the Sony Cyber-shot RX100 Mark III within a few moments of each other using their best quality JPEG settings at each of their ISO sensitivity settings I matched the field of view on each camera and set them at an aperture previously determined to deliver the sharpest results. I also shot everything in RAW and will publish a RAW comparison once the G7X is supported in Adobe Camera RAW.I tested both cameras at each of their apertures and found f4 to be a common sweetspot, so that’s what I set each of them to in Aperture Priority. On this page I’m comparing their noise levels on JPEGs processed with the in-camera defaults, with the exception of disabling any contrast enhancement as this can increase artefacts at high ISOs. The crops as always are taken from the area marked by the red rectangle in the thumbnail above left and presented here at 100%. I’ll be adding RAW comparisons once Adobe Camera RAW supports the G7X.

Between the base 125 ISO and 800 ISO, the Canon G7X exhibits lower contrast compared to the RX100 III. Just look at the text on the menu, which on the Sony looks much blacker and crisper. I believe this is actually down to their respective image processing strategies, with Sony applying higher contrast and sharpening by default, and the impact of this can also be seen by accentuating the texture of the menu paper – not always in an attractive way. I also think Canon is applying greater noise reduction at this point, which also tallies with earlier strategies of being quite noise averse.

At 1600 ISO onwards though where much of the signal is plagued with noise, Sony’s processing gives the RX100 III a visible advantage over the G7X. The text remains quite readable on the Sony right up to and including 6400 ISO, whereas many of the characters have merged into mush on the Canon. This is impressive noise reduction at work on the Sony.

Now once again I put this down to their default image processing for in-camera JPEGs and look forward to processing their RAW files using the same settings to see if they really do start with the same amount of information. But one thing’s for certain: the Sony RX100 III is delivering punchier-looking JPEGs with better-managed noise reduction at higher sensitivities than the Canon G7X. I’d say the Sony enjoys the win here for in-camera JPEGs, especially at higher sensitivities.

Now check out my page of Canon G7X sample images or skip straight to my verdict!