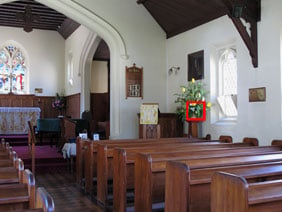 To compare noise levels under real-life conditions we shot this scene with the Canon PowerShot G11, Olympus E-P1 and Panasonic Lumix DMC-GF1 within a few moments of each other using each of their ISO settings.

Both the GF1 and EP-1 were fitted with the same Lumix G 20mm f1.7 lens, set to f5.6 in Aperture Priority. The G11’s zoom was adjusted to match the field-of-view as closely as possible.The image above was taken with the Canon PowerShot G11 in Program mode at 9mm f3.2 with a sensitivity of 80 ISO. The original JPEG measured 1.96MB and the metered exposure was 0.5 seconds. The crops are taken from the area marked with the red square and presented below at 100%. Each camera was using its default settings for noise reduction, but all contrast-enhancements were disabled to avoid artificially increasing the noise.

Canon’s PowerShot G11 kicks-off this sequence at 80 ISO and while pixel-peepers will already spot some noise textures in shadow areas, the result remains detailed and sufficiently clean to please most photographers.

At 100 ISO the two Micro Four Thirds models come-in and it’s clear how the Olympus E-P1 is applying greater sharpening to its in-camera JPEGs by default than the Panasonic GF1; in fact it’s the punchiest of the three at this point. In the meantime, the G11 remains respectable although those shadow noise textures have increased a little.

At 200 ISO, pixel-peepers will notice noise textures on both the Canon G11 and Olympus E-P1 crops; indeed the E-P1 appears to be suffering the most at this point, which is surprising given it has a considerably bigger sensor than the G11. Likewise at 400 ISO where at first glance all three models seem to share similar noise textures.

But you have to look a little deeper to see what’s really going on here. As the sensitivity is increased, the G11 appears to keep visible noise textures under control until quite high ISOs, but is steadily losing saturation along with both fine and tonal details. In the meantime, the saturation and detail remains fairly intact on the two Micro Four Thirds models, but some noise textures may have become more visible than you’d expect on the E-P1, thanks to relatively high sharpening by default on its in-camera JPEGs.

At 800 ISO, the small sensor and image processing strategy of the Canon G11 is beginning to struggle, with a visibly poorer result than the two Micro Four Thirds models. Again there is noise on the EP-1 and GF1 samples, but there’s also finer detail.

At 1600 ISO there’s a loss in quality across all three models, but unsurprisingly the Canon G11 suffers from the biggest drop. For an illustration of the loss in saturation and contrast, just look at the fine leaves in the lower middle area which appear quite faint on the G11 as if the lighting conditions had changed compared to the other two models. But scroll-up to the lower sensitivities and you’ll see the G11 gradually regain its contrast and saturation until all three models look quite similar.

The Canon G11 bravely offers a maximum sensitivity of 3200 ISO, but it’s really too compromised to be of much use to anyone. The E-P1 and GF1 are also showing lots of visible noise at this point, but remain far preferable. The Olympus E-P1 then goes on to offer a 6400 ISO option, which unsurprisingly is noisier still, and again not of much use unless you find yourself really stuck in low light.

So at first glance the Canon PowerShot G11 appears to keep-up pretty well with the two Micro Four Thirds models as their sensitivity increases, but behind the scenes the image processing is working hard to make the best of steadily worsening conditions.

Look beyond the processing defaults and you’ll see the G11 gradually losing saturation, contrast and fine detail from 200 ISO upwards (just like most compacts), while the EP-1 and GF1 keep hold of theirs until much further on, albeit with more visible noise than you might expect.

To be fair though the G11 has a much smaller sensor, and compared to typical compacts it actually performs pretty well in terms of noise. Indeed, the drop in pixel density allows the G11 to exhibit visibly lower noise levels than the earlier G10 at higher sensitivities, and we’d say it typically enjoys a one stop advantage over that model above 200 ISO.

The older G10 begins to really suffer at 400 ISO, and by 800 ISO most fine details have long-gone. But remember the higher resolution of the G10 means its artefacts will appear smaller than those from the G11 when both have their images printed the same size. In addition, since neither camera looks great much above 400 ISO, there’s an argument to go for the model which looks best at 200 ISO and below, in which case the higher resolution of the G10 gives it the edge.

So if you’re choosing between the G10 and G11 on image quality alone, go for the former if you mostly shoot between 80 and 200 ISO, and the latter if you regularly go higher. But again if you do regularly shoot above 400 ISO and desire decent image quality, then you should really be looking at a camera with a physically bigger sensor.

Which brings us to the two Micro Four Thirds models. When comparing the Olympus E-P1 against the Panasonic GF1, the former is clearly applying greater sharpening to its default JPEGs for punchier images throughout the range. The GF1 appears slightly softer using its default settings, and also suffers from more visible chroma noise artefacts, especially on the flowerpot. To be fair though, the GF1 retains the subtle horizontal bands on the same flowerpot until much higher sensitivities. The GF1 also has finer grain at higher sensitivities than the EP-1, although it also seems loses more saturation.

As you might expect, it’s a case of swings and roundabouts when comparing the image quality of the two Micro Four Thirds models, although when both cameras are set to record JPEGs using their default settings, most would prefer the output from the Olympus E-P1.