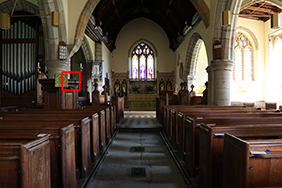 To compare RAW noise levels under real-life conditions, I shot this scene with the Canon EOS 70D and the Nikon D7100, within a few moments of each other using their RAW modes at each of their ISO sensitivity settings; my sample images are on the next page.

The image above was taken with the Canon EOS 70D. The camera was set to f5.6 in Aperture priority mode and the sensitivity to 100 ISO; I’d previously confirmed that f5.6 delivered the sharpest result with the EF-S 18-135mm STM kit lens. I used the same aperture for the Nikon D7100 and DX 18-105mm, again having pre-determined this to deliver the best results. Both cameras were using their default settings, although for this test all contrast or dynamic range enhancers were disabled as these can introduce noise. The D7100’s metering was adjusted to match the 70D, so what you’re looking at below are the exact same shutter speeds for each ISO setting.

I processed all files in Adobe Camera RAW using identical settings: Sharpening at 70 / 0.5 / 36 / 10, Luminance and Colour Noise Reduction both set to zero, the White Balance set to 3750K and the Process to 2012 with the Adobe Standard profile. These settings were chosen to reveal the differences in sensor quality and isolate them from in-camera processing. The high degree of sharpening with a small radius enhances the finest details without causing undesirable artefacts, while the zero noise reduction unveils what’s really going on behind the scenes – as such the visible noise levels at higher ISOs will be much greater than you’re used to seeing in many comparisons, but again it’s an approach that’s designed to show the actual detail that’s being recorded before you start work on processing and cleaning it up if desired.

A quick glance at the crops below shows that once you process files from both the Canon 70D and Nikon D7100 using the same settings, they share a very similar appearance. The high contrast approach of the in-camera Canon JPEGs using the default settings has gone and in its place the processed RAW files here are full of detail with a more natural style.

With all noise reduction turned off and sharpening turned up though, you’ll see evidence of speckles much earlier on in the crops below, and indeed pixel peepers may notice a very faint texture on the Canon 70D even at 100 ISO, although revealingly the Nikon D7100 looks a little smoother at this point.

At 200 ISO these textures become slightly more apparent on both bodies, although the D7100 remains a little ahead. This pretty much remains the case throughout the sensitivity range, with steadily increasing noise levels as the ISO is doubled, yet with the Nikon D7100 arguably enjoying a minor but visible lead at least up to 1600 ISO. It’s also interesting that the noise artefacts on the D7100 appear smaller than on the Canon 70D, which coupled with its slightly higher resolution means they’ll be reproduced a little smaller still on prints of the same size.

This is a good result for the D7100. With four extra Megapixels packed into essentially the same sensor area you’d think it would fall behind a little in high ISO noise, but in my tests here the opposite is true. That said, we are talking about pixel peeping at 100% here, and under pretty extreme circumstances too – after all, there’s few people who’d turn off all noise reduction before applying a high level of sharpening to their RAW files. If you processed the files from both cameras with more normal settings, the results would actually be pretty similar. But it is interesting none-the-less to see what’s happening under the hood.

For more examples under a variety of conditions, check out my Canon 70D sample images!