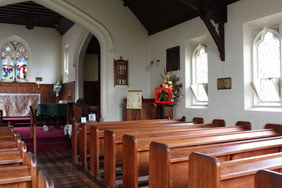 To compare noise levels under real-life conditions we shot this scene with the Canon EOS 500D / T1i, Nikon D5000 and Olympus E-620 within a few moments of each other using each of their ISO settings. Each camera was fitted with its respective kit lens (see details below) and adjusted to deliver the same vertical field of view. The images were focused in Live View and taken in Aperture Priority at f8 with Auto White Balance.

The image above was taken with the Canon EOS 500D / Rebel T1i at a sensitivity of 100 ISO with the kit lens set to 23mm f8; the original Large Fine JPEG file measured 4.88MB. The crops below are taken from an area marked by the red square and presented at 100%.

We used the default noise reduction settings for each camera: ‘Standard’ on the 500D / T1i, ‘Normal’ on the D5000 and ‘Standard Noise Filter’ on the E-620. Each camera also offers automatic contrast adjustment options which were all disabled for this test as they can artificially increase visible noise levels. As such, the Auto Lighting Optimizer on the Canon and Active D-Lighting on the Nikon were disabled, while the E-620’s Gradation was set to Normal, the latter to avoid its contrast-adjusting ‘Auto’ setting.

Each camera metered the scene differently, so we used the images from the Canon 500D / T1i as a target for the others to match in brightness as measured in Photoshop. Doing so required +1EV compensation from the Nikon D5000 and +0.3EV compensation from the Olympus E-620. The actual exposures for the 100 ISO samples below were four seconds, two seconds and 3.2 seconds for the Canon, Nikon and Olympus respectively. Since all were taken at f8 under the same lighting conditions and the image brightness as measured by Photoshop is roughly similar, this gives an indication of each camera’s relative sensitivity.

Note the Canon 500D / T1i and Nikon D5000 capture wider 3:2 aspect ratio images than the Olympus E-620, so by matching the vertical field of view on all three, we’re effectively cropping the sides from the 3:2 models and treating them as 13.4 and 10.8 Megapixel cameras respectively, delivering 4:3 shaped images. As such, the D5000’s ‘lower’ resolution in the 4:3 frame considered here means its crops show the largest area, while the Canon crops show the smallest area because it still has effectively the highest resolution. Note if only comparing the Canon and Nikon crops, you can ignore the above as both captured exactly the same 3:2 area.

Kicking-off the sequence at 100 ISO (or L1.0 on the Nikon), all three bodies are unsurprisingly delivering clean and detailed results, although pixel-peepers may notice a slight hint of noise or processing textures in the darker shadow areas of the E-620 crop. In terms of real-life detail captured, you’d presume the Canon 500D / T1i would have an easy advantage over the other pair with an extra three Megapixels in its favour, but the difference between them below is actually very subtle. There’s arguably fractionally more detail in some areas of the Canon crops, but it’s certainly not the difference of night and day.

At 200 ISO (the Nikon’s base sensitivity) there’s a very slight increase in noise textures on both the Canon and Olympus crops, although again little to worry anyone other than the pixel-peepers among us. The D5000 is looking cleanest here, although the actual detail recorded by all three remains roughly similar.

With the sensitivity increased to 400 ISO, greater differences begin to emerge. All three bodies are exhibiting higher levels of noise textures than before, with the E-620 suffering the worst and the Nikon again coming-up the cleanest of the three. It is also important to look beyond the textures in the background though and compare fine tonal detail in areas like the leaf veins. Here the E-620 is beginning to lose subtle details which are better retained on the Canon and especially the Nikon.

At 800 ISO the situation gets slightly worse again with more obvious noise textures, now also including some chroma artefacts on the E-620, and noise reduction eliminating fine tonal details. Interestingly the Canon is becoming slightly softer and less saturated as its sensitivity increases, leaving arguably the most preferable result to the D5000.

At 1600 ISO, noise levels have become much higher on the E-620 than the other two cameras, although both the Canon and Nikon are suffering too. The EOS 500D / T1i again appears worse-off than the Nikon D5000, with a slightly softer, less saturated image.

With the sensitivity increased to 3200 ISO we’re at the upper limit of the Olympus E-620 and it’s really showing with obvious noise speckles across the image. The Canon and Nikon bodies appear to be handling this sensitivity much better at first glance, although look again at the 500D / T1i crop and you’ll see some undesirable processing artefacts and an image that’s fairly mushy. The Nikon D5000 is the easy leader at this sensitivity.

At 6400 ISO we’re at the upper limit of the D5000’s range and now the quality is really beginning to suffer. There’s a big increase in noise artefacts over the previous sample, although again when viewed at 100%, it’s holding it together better than the Canon.

Canon now bravely continues alone to the heady heights of 12,800 ISO, but it’s a step too far. The image is plagued by undesirable artefacts and this should only ever be used when you have no other choice – and when the resulting image will be reproduced at very small sizes.

At first glance it’s easy to say the Nikon D5000 comes out on top, but it’s important to remember the Canon’s higher resolution means its artefacts will appear slightly smaller when images from it and the Nikon are reproduced at the same physical size. But even with that taken into consideration we’d say the D5000 still takes the lead here, with cleaner images across its range and essentially the same degree of real-life detail when the conditions and settings are favourable. It once again proves having more Megapixels isn’t necessarily better unless you’re shooting charts at low sensitivities.

As for the Olympus E-620, it clearly suffers at higher sensitivities more so than the other two bodies here, which isn’t surprising given its smaller sensor surface area. To be fair, it does hold together well at lower sensitivities and it’s good to see a fairly hands-off approach to in-camera processing which bodes well for later tweaking on your computer.

Now see how the 500D / T1i compares against the earlier EOS 450D / XSi or take a look at some more real-life examples across the sensitivity range in our Canon EOS 500D / T1i gallery.