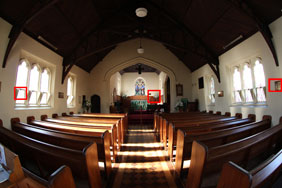 This second shot was again taken with the Canon EF 8-15mm Fisheye on an EOS 600D / T3i body at 10mm for a 180 degree diagonal and no vignetting. Looking briefly at the complete image opposite, you can clearly see the distortion curving the walls and rows of seats. Careful composition and organic subject matter allowed me to avoid obvious distortion in the first example above, but here there’s no mistaking it. You can access the original image by clicking the photo opposite.

Moving onto the crops, it’s the same story as above. There’s loads of sharp detail across the frame, from the middle right up to the corners, but again the problem concerns chromatic aberrations.

This shot is a worse-case scenario with a dark room featuring brightly backlit windows saturating the image. As such it’s no surprise to find very strong coloured fringing around the window frames. Canon’s DPP struggled to remove them significantly on a RAW version of the file, although Adobe’s Camera RAW fared better, almost completely eliminating them albeit with some pretty heavy correction.

Moving on, this next shot was taken with the Canon EF 8-15mm Fisheye again mounted on an EOS 1D Mark IV body, but this time zoomed-out to the maximum 8mm focal length. You can access a high resolution version by clicking the photo opposite.The imaging circle has become quite apparent here, but due to the 1.3x reduction of the APS-H format, is cropped.Once again the same comments from the last shot apply here. There’s a spectacular amount of fine detail across the entire imaging circle, and the only complaint is minor coloured fringing, although as above, it’s pretty minimal here compared to the APS-C examples.Looking forward to the full-frame results, the same seems to apply. It would appear the EF 8-15mm Fisheye certainly suffers from chromatic aberrations, but it’s only a major issue when the highlights are completely blown-out. On cameras with a broader dynamic range (normally thanks to a larger pixel-pitch), the effect is much less of a problem. 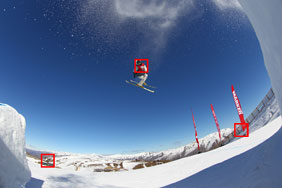 This shot was taken with the Canon EF 8-15mm Fisheye mounted on an EOS 1D Mark IV body. This has a cropped-frame / APS-H sensor with a 1.3x field-reduction factor. The photo opposite was taken with the lens set to 12mm, the widest it can go on an APS-H body without corner vignetting. As such it captures a 180 degree diagonal angle of view. You can access a higher resolution version by clicking the photo opposite.

Looking at the 100% crops you can’t help but be impressed by the lens and camera combination. Once again there’s a great deal of finely resolved detail across the entire frame.

Given the previous examples, you’d expect to find lots of chromatic aberrations in bright snowy conditions like these, but while there is a little coloured fringing evident, it’s nowhere near as bad as the last two shots.

There’s a number of possible explanations. The most likely actually concerns the sensor, but not its size since we’re still judging the same edge of the imaging circle in both cases (albeit one at 10mm and the other at 12mm). I believe sensor saturation could be at play here. The EOS 600D / T3i packs 18 Megapixels into an APS-C sensor, whereas the EOS 1D Mark IV fits its 16 Megapixels into a larger APS-H sensor. As such the EOS 1D Mark IV enjoys a larger pixel pitch with more latitude for retaining highlight detail. Since fringing becomes worse with greater contrast between light and dark, perhaps the EOS 600D / T3i images suffered more because of their finer pixel-pitch and greater saturation.

It’s just a theory, but certainly in my tests, the worst fringing occurred on 18 Megapixel APS-C shots, whereas the 16 Megapixel APS-H images were much less affected. Either way, what little fringing there was in this image cleaned-up pretty easily in software. 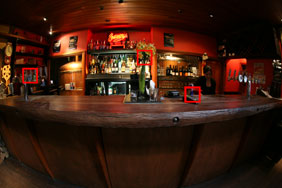 Now it’s time for some full-frame shots. The photo opposite was taken with the Canon EF 8-15mm Fisheye mounted on an EOS 5D body. This has a full-frame sensor with no field-reduction factor. The image here was taken with the lens set to 15mm, where the lens delivers a 175 degree diagonal angle of view. You can access the original image by clicking the photo opposite.

Once again there’s little to complain about in the crops. The first looks a tad soft, but that’s possibly down to the taps falling fractionally beyond the depth of field at f4. Either way, it’s hardly bad and the other two crops are very sharp and detailed. 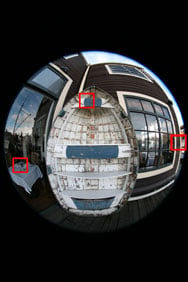 This next shot was taken with the Canon EF 8-15mm Fisheye again mounted on an EOS 5D body, although this time with the lens full zoomed-out to 8mm, at which point it delivers a circular fisheye view. This gives you 180 degrees in every axis, thereby capturing a full hemisphere. You can access the original image by clicking the photo opposite.

First a quick note on photos taken with the EF 8-15mm Fisheye which reveal the edge between the imaging circle and the blackness beyond: there’s a clear blue-ish ring around the edge of the actual image.

As you can see in the third crop, it’s quite obvious, but isn’t always detrimental to the overall image. If it is, you can always make a circular crop in software for a cleaner, sharper edge if desired.

As for this actual shot, there is again an impressive degree of fine detail and lack of aberrations to mention. The edge of the building against the overcast sky is a prime candidate for chromatic aberrations, but while a little coloured fringing is visible, it’s again less of an issue than it was on the high-density sensor of the EOS 600D / T3i. 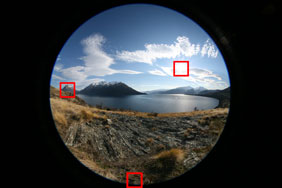 This last shot was taken with the Canon EF 8-15mm Fisheye again mounted on an EOS 5D body, and again zoomed-out to 8mm to capture a circular fisheye image. You can access the original image by clicking the photo opposite.

In this photo I shot directly into the Sun with the aperture closed to f22 to achieve a star-burst effect. The Sun was unfortunately very close to cloud, so the effect isn’t as good as it could have been, but it’s still a pleasing result.

The crops again are packed with detail, and there’s virtually no coloured fringing to mention, but there is a foot. Yes, my foot at the bottom of the frame, revealed in the second crop. The EF 8-15mm Fisheye captures such an enormous field of view that you have to be very careful to watch the edges of the frame for rogue limbs and feet which can very easily creep-into view. Still at least my shoe looks nice and sharp, despite it being pressed right up against the edge of the imaging circle.

So overall, excellent performance from the EF 8-15mm Fisheye, which delivers sharp details across the frame and only really falls down in terms of coloured fringing – and then only significantly on sensors which saturate easily. It’s also important to note that of all the optical aberrations, coloured fringing can be reduced or even eliminated fairly easily, whereas there’s little you can do with an image which becomes soft in the corners. There’s normally a compromise with every optical design, and I’d say Canon make the right decision with the EF 8-15mm. 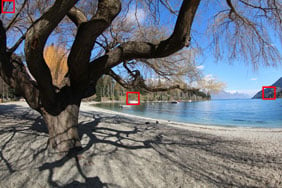 This first shot was taken with the Canon EF 8-15mm Fisheye mounted on an EOS 600D / T3i body. This has a cropped-frame / APS-C sensor with a 1.6x field-reduction factor. The photo opposite was taken with the lens set to 10mm, the widest it can go on an APS-C body without corner vignetting. As such it captures a 180 degree diagonal angle of view. You can access the original image by clicking the photo opposite.

The three crops taken from the corner, middle and far right sides pretty much explain everything you need to know about this lens in terms of image quality. First, there’s stacks of sharp detail right up to the edge of the imaging circle, and little to no softening to worry about at any point.

That’s the good news. In terms of bad news, there’s quite visible chromatic aberrations as you move away from the centre. Branches against overcast white skies are always a tortuous test, but even in this example against a much more forgiving blue sky, the coloured fringing is quite apparent. It’s possible to greatly reduce the effect on RAW files using software such as Adobe’s Camera RAW or Canon’s own Digital Photo Professional, but in extreme cases you’ll still be left with some. This would appear to be the Achilles Heel of the EF 8-15mm Fisheye.