Canon's EF 40mm f2.8 STM is the smallest EF lens in the catalogue. It matches the weight of the EF 50mm f1.8 to become the joint lightest, but at just 23mm thick, is easily the thinnest, earning its nickname as a pancake prime. The 40mm focal length is useful as a general-purpose lens on both cropped-frame and especially full-frame models and it'll make your DSLR look and feel much smaller. Meanwhile the Stepper Motor AF allows quieter focusing for movies especially with models like the EOS T4i / 650D. The f2.8 aperture may be slower than the 50mm options (which coupled with the shorter focal length rules it out for serious portraits), but it's the size of the 40mm which is behind its ultimate charm. It's a fun, practical, extremely compact and surprisingly good quality lens to have in your collection.

Check prices on the Canon 40mm f2.8 STM at Amazon, B&H, Adorama, or Wex. Alternatively get yourself a copy of my In Camera book or treat me to a coffee! Thanks!

The Canon EF 40mm f2.8 STM is the company’s first ‘pancake’ lens, designed to be as small and light as possible. Measuring just 22.8mm thick, it protrudes to roughly the same degree as the grip on many DSLRs, and at 130g you’ll hardly notice it when mounted. This in turn makes even larger DSLRs feel much more portable than before, and allows you to squeeze them into smaller bags or even certain pockets.

Announced in June 2012, Canon’s first pancake lens has a fixed focal length of 40mm, delivering semi-wide angle coverage on a full-frame body, or 64mm equivalent on a cropped body. This is an unusual focal length that takes a little getting used-to, but can work out as a good walkaround option on full-frame cameras. It’s a tougher sell on cropped models, being too long to be standard but too short for serious portrait use, but for some it’ll still be more flexible than a 50mm lens. 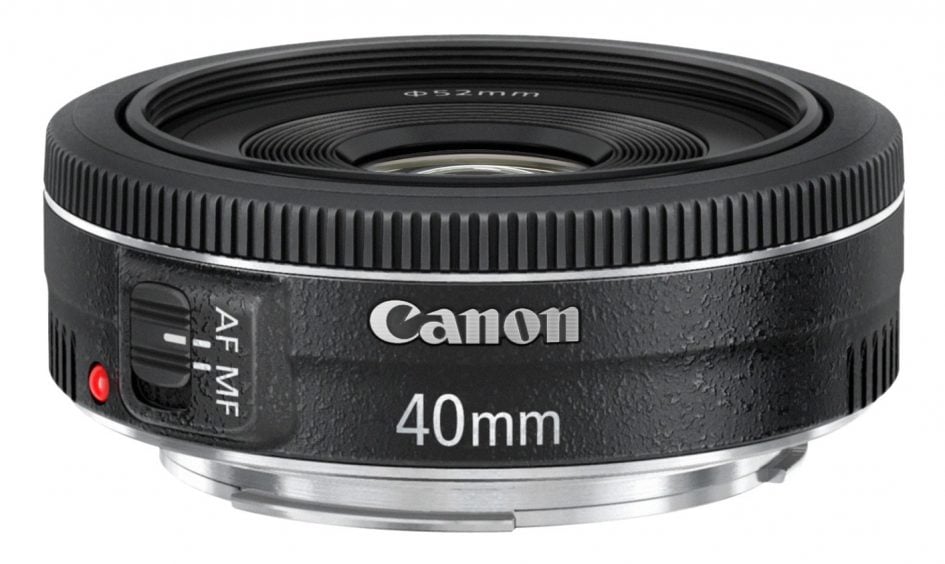 The focal ratio of 2.8 may be at least one stop slower than any of Canon’s three 50mm lenses, but is still bright enough to be usable in low light or to deliver a relatively shallow depth of field, while the STM system promises smooth and quiet autofocusing during movies on compatible models. While there’s no denying the EF 40mm f2.8 STM is the smallest and lightest option from Canon yet, the big question is if this size compromises the optical quality. On this page I’d like to show you how the lens measures-up on detailed landscapes in isolation and when compared to the EF 24-105mm f4L at 40mm. I’ll also include comparisons for sharpness against the ever-popular EF 50mm f1.8 II and show how their respective depth-of-field compares. So if you fancy a pancake for your Canon DSLR, read on.