Pictured below are the Canon EF 24-105mm on the left and the Canon EF 24-70mm on the right, with both lenses zoomed-out to their widest 24mm setting. The EF 24-70mm is quite unique in that the barrel is extended at its widest focal length and shortest when zoomed-in to 70mm.

Both lenses share essentially the same diameter of just over 83mm, and the same filter thread of 77mm; users of polarisers will be pleased to learn both employ internal focusing with non-rotating end sections.Once each barrel is retracted, the Canon EF 24-70mm is noticeably longer at 123mm compared to 107mm for the Canon EF 24-105mm model. Set to its widest angle, the 24-70mm barrel extends by 34mm.Pictured below are both lenses zoomed-in to their longest focal lengths. Here the EF 24-105mm barrel extends by 33mm, while the EF 24-70mm retracts to its shortest configuration.From the photos, both lenses appear to share similar build quality, but compare them in person and the older EF 24-70mm feels tougher with more metallic body parts. This build coupled with the faster f2.8 focal ratio unsurprisingly results in the EF 24-70mm weighing more, although you may be surprised to learn it’s almost 50% heavier. Indeed the EF 24-105mm feels relatively light at 670g compared to the 24-70mm at a somewhat hefty 950g.While the older lens undoubtedly feels better equipped to stand up to the knocks – and indeed our sample had previously seen some rough action – the EF 24-105mm is in no way badly constructed. It looks and feels similar to the build of other modern Canon optics like the EF 17-40mm f/4L or EF 70-300mm DO IS.In terms of focusing, both lenses are quick and quiet thanks to their USM motors, although compared side-by-side the older EF 24-70mm definitely had a measurable edge in speed. With a faster focal ratio, it’s also better equipped for focusing under poorer light conditions.

Canon EF 24-105mm coverage, wide angle with Canon EOS 5DBoth the Canon EF 24-105mm and EF 24-70mm share the same wide angle specification, but as with all lenses, it’s always worth putting this to the test. So to compare actual coverage we shot the same scene with each lens set to 24mm within a few moments of each other, and mounted on a tripod to ensure a consistent position.

With both images opened alongside each other in Photoshop, a tiny difference in coverage was visible: the EF 24-105mm captured a fractionally larger field than the EF 24-70mm, but it really is a case of splitting hairs.

Next up came the telephoto-end of each lens. Again to compare actual coverage we shot the same scene with each lens fully zoomed-in within a few moments of each other, and mounted on a tripod to ensure a consistent position.

Here the longer reach of the Canon EF 24-105mm is clear, and gives it a real advantage over the older EF 24-70mm model. It makes it a much more versatile lens to carry around, and indeed many photographers could find it satisfying most of their general requirements.

Potential EF 24-105mm buyers may also be considering the cheaper EF 17-40mm lens. This clearly delivers a much wider range, but can be surprisingly usable as a general-purpose lens on full-frame bodies. To compare the coverage of it againbst the EF 24-105mm, see our Canon EF 17-40mm review.

The unique selling point of the Canon EF 24-105mm over the EF 24-70mm is its Image Stabilisation (IS) technology to reduce camera-shake. Canon claims its latest IS system offers three stops of compensation, which should allow you to handhold shutter speeds eight times slower than normal. For example, if the slowest exposure you could confidently handhold at a certain focal length was, say, 1/60 of a second, three stops of compensation should enable you to enjoy the same result at 1/8 (or more accurately, 1/7.5).

Like other Canon wide zooms with IS, there’s only one mode available with a switch on the side of the lens to switch it on or off; there’s no panning mode here. The IS system kicks in with a faint click when you depress the shutter halfway and stays on for a few seconds before deactivating to save power.

To test its effectiveness we shot the same scene zoomed-into 105mm with and without IS enabled. To place further strain on the system we performed this test using a Canon EOS 350D / Rebel XT, which effectively multiplied the 105mm focal length to 168mm.

Below are two examples of a handheld macro composition taken with and without IS, using a shutter speed of 1/13 of a second. We’ve cropped the original 350D images to 1728×1152, thereby showing one quarter of the original, then reduced them to 282×188 pixels for reproduction here. Viewed at 100%, the shot with IS is perfectly sharp.

Image Stabilisation may eat through your batteries faster, but its benefit is clear. It allows you to handhold at much slower shutter speeds than normal, in turn enabling you to shoot under dimmer conditions without having to increase the aperture or the camera’s sensitivity to avoid shake. 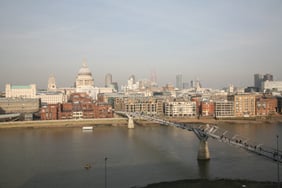 To compare real-life performance we shot the same scene with each lens within moments of each other using a Canon EOS-5D at f8 in Aperture Priority mode.

The 5D was set to Large Fine JPEG mode and the Standard Picture Style. The crops are taken from the originals and presented here at 100%.

The first two crops clearly show the older EF 24-70mm delivering a sharper result, although in the third crop from the far right side, our EF 24-105mm sample is sharper. Some differences may be due to the particular samples on test.

Potential EF 24-105mm buyers may also be considering the EF 17-40mm lens. While this is an ultra-wide angle model, there is crossover between their focal lengths and to see how they both compare side-by-side at 40mm, check our Canon EF 17-40mm review.