The Canon RF 50mm f1.2L USM is a supremely well-corrected ‘standard’ prime lens for Canon’s EOS R mirrorless system. It delivers the optical goods in every regard with crisp details into the corners, minimal distortion, and very shallow depth-of-field effects with lovely rendering. But be in no doubt, this is an unapologetically large, heavy and expensive lens that’s almost twice the length, twice the weight and twice the price of the earlier EF 50mm f1.2L USM. Sure it’s much sharper in the corners, suffers from less distortion and lower fringing, but if you all you want is creamy bokeh, then the two models actually deliver surprisingly similar results in terms of blurred areas. Then there’s Sigma’s 50mm f1.4 ART which may be fraction slower in focal ratio as well as focusing speed, but which delivers excellent results across the frame at less than half the price. Indeed, the high price of the RF 50mm f1.2L USM coupled with its compelling alternatives means it misses out on my highest award. But neither the EF 50mm f1.2L USM nor Sigma ART will match its overall performance, and they’re not native to the EOS R system either. Ultimately if you want it all, then the RF 50mm f1.2L USM is one of the best standard lenses around, a joy to shoot with, and importantly for Canon, a persuasive reason to consider the EOS R system - Recommended if your budget can stretch.

Check prices on the Canon RF 50mm f1.2L at Amazon, B&H, Adorama, or Wex. Alternatively get yourself a copy of my In Camera book or treat me to a coffee! Thanks!

The RF 50mm f1.2L USM could be seen as a successor of sorts to the previous EF 50mm f1.2L USM, launched 12 years previously. Both share the same 50mm focal length for standard coverage and the same fast f1.2 focal ratio, allowing them to deliver very shallow depth-of-field effects. While the older EF 50mm f1.2L USM is native to Canon DSLRs and adaptable to Canon’s EOS R though, the new RF 50mm f1.2L USM is designed for use on EOS R mirrorless bodies only and will not work on EOS DSLRs. So if you want to use Canon’s latest 50mm f1.2, you’ll need to invest in an EOS R body. 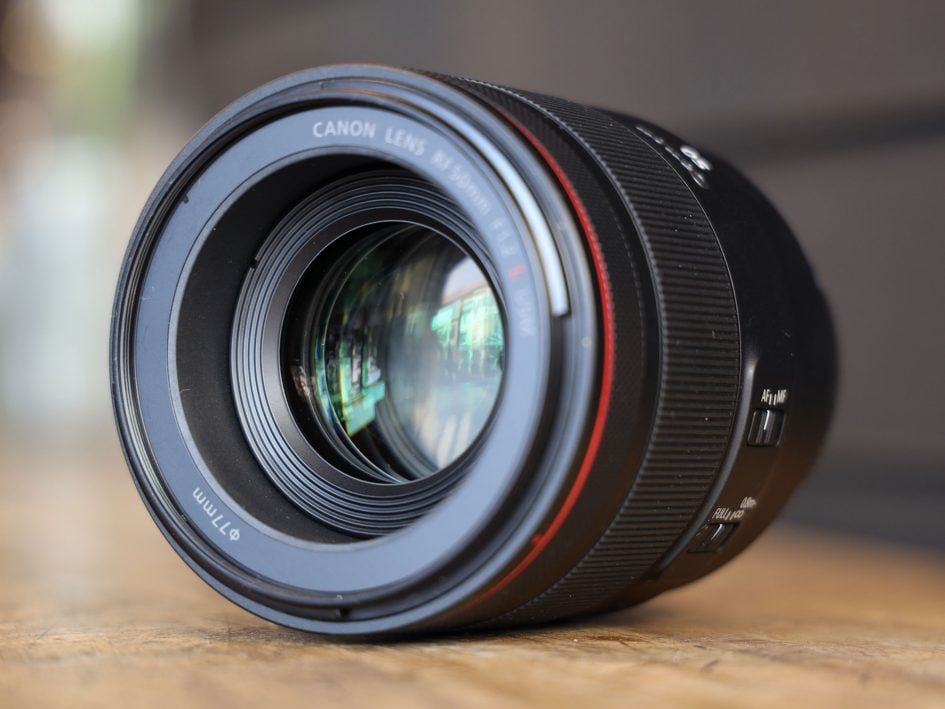 Some new lenses are clearly based on older optical and physical designs, but that’s definitely not the case with the RF 50mm f1.2L USM. One look at its substantial barrel and the arrangement of its elements proves this is an entirely new design, optimised for the mirrorless EOS R system and taking advantage of the shorter flange distance.

While some mirrorless systems have launched with compact lenses and bodies, Canon has revealingly gone large for its first four RF lenses and the EOS R body. The RF 50mm f1.2L USM in particular is an unapologetically large lens for any system, whether DSLR or mirrorless, and it’s quite a shock if you’re familiar with Canon’s own EF 50mm f1.2L USM. Luckily the correspondingly chunky EOS R body doesn’t feel overwhelmed by it. 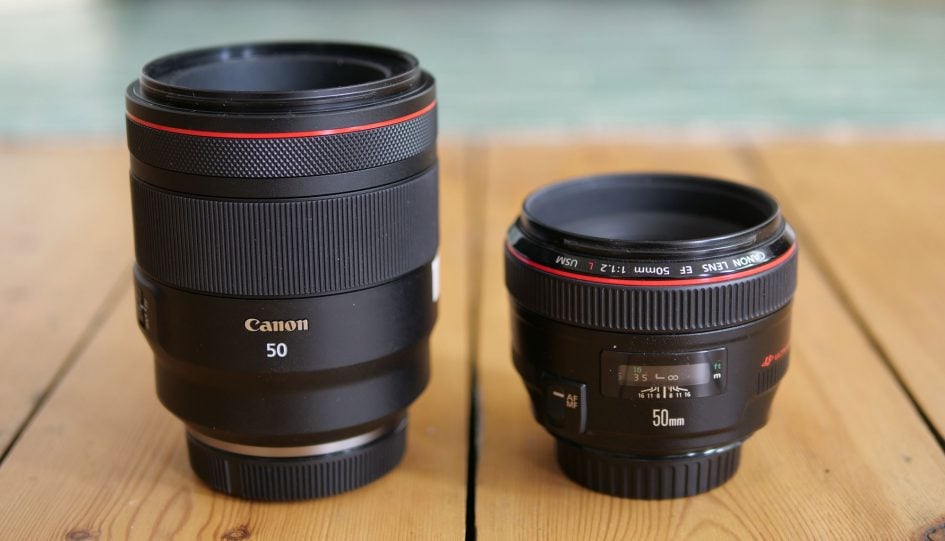 Obviously the EF / DSLR version is designed for use on a camera that positions its sensor further away, so perhaps a fairer comparison length-wise is to mount the older EF 50mm f1.2L USM on the EOS R adapter as I’ve done below. 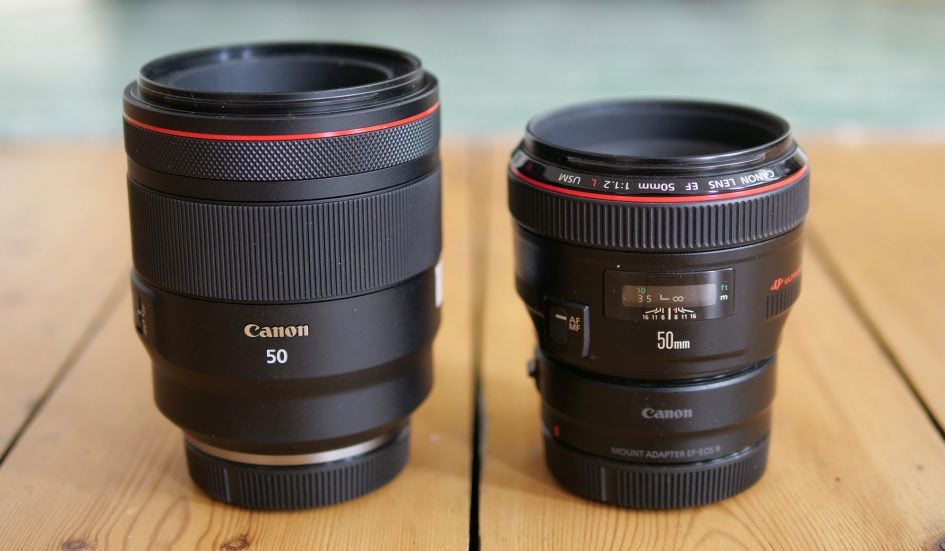 With the EOS R adapter fitted to the older EF 50mm f1.2L USM, it begins to approach the length of the new RF version, but there’s still a striking difference in weight. That said, there’s a trend for larger and heavier high-performance lenses right now, and the new Canon isn’t far off the excellent Sigma 50mm f1.4 ART which measures 85mm in diameter, 100mm in length and weighs 815g – and remember the Canon boasts a brighter focal ratio.

In terms of build quality, the RF 50mm f1.2L USM certainly feels tough and is sealed against dust and moisture. I used it close to sea spray with no ill effects, but have yet to try it in actual rain; time will tell on the reliability front, but there’s no reason to believe it’ll be any worse than similar members of the L family.

In terms of controls, there’s two rings and two switches. The manual focusing ring felt smooth and nicely-damped, although like other RF lenses to date, it employs a focus-by-wire system which uses a motor to drive the manual focus, making it feel a little detached compared to older mechanical EF designs; it also means you can’t preset a focusing distance on the lens, power the camera off and on again and expect it to remain in exactly the same place. That said, it does have the benefit of allowing you to customise the direction of the focusing ring and whether it varies with rotation speed or is linked to the rotation degree. 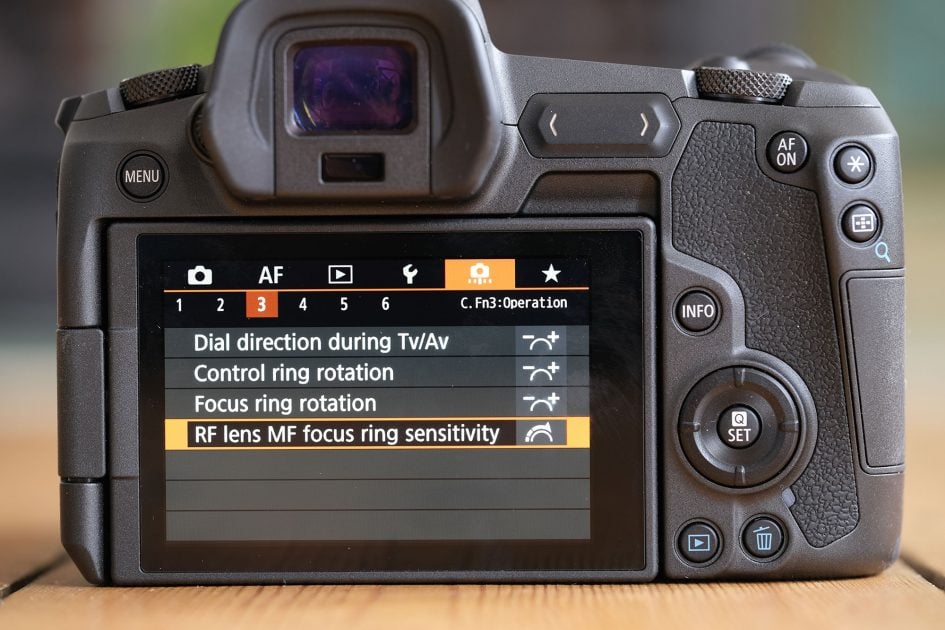 Towards the end of the barrel you’ll find the second ring, a customisable control that’s fitted to all RF lenses. As standard it clicks as it turns, but I believe it can be de-clicked at a service centre if preferred. The control ring can be customised in the body to adjust the aperture, shutter, ISO or exposure compensation.

Finally, the two switches set the camera between AF and MF modes, and set a focus limiter to the full range of from 0.8m to infinity. Limiting the range to ignore distances between 40 and 80cm can certainly reduce hunting and accelerate the overall response.

Of these three lenses, the RF 50mm f1.2L USM is the only native lens for the EOS R system, allowing its rear-most element to be positioned closest to the sensor. This in turn has the potential for sharper results in the corners, or at least makes it easier for the optical designers to achieve this – we’ll see in my results.

Focusing is performed by a ring-type USM motor and in use on the EOS R body felt fairly swift and quiet for stills photography – again if you set the focus limit to 80cm or further, you can minimise unnecessary hunting and accelerate autofocus across common distances. The bright focal ratio also allows the EOS R to focus under very dim conditions of -6EV, at least with the central area. For general use it felt a little quicker than the EF 50mm f1.2L USM using the EOS R adapter, but not significantly so.

For video, the autofocusing racked smoothly, although made quite audible clicking sounds as it did so which can easily be recorded by the camera’s internal microphones. You can see – and hear – an example of this in the face tracking demo below where the aperture, shutter and ISO were all fixed, so the only thing moving was the autofocus system. Strangely there’s two audible sounds: one of the focusing motor and the second being the clicks.

To be fair, the earlier EF 50mm f1.2L USM also made regular sounds while racking focus which again you can hear in the clip below. I’d recommend using both with an external microphone when recording video.

It’s fair to say most people considering a lens with a fast focal ratio are interested in how it renders out-of-focus areas; indeed the quality of the background blurring can be as important as the sharpness of the focused subject. In particular how a lens renders blurred specular highlights or lights can become something of an obsession for many optical enthusiasts.

Here’s four examples at f1.2 of a subject deliberately positioned with various lights behind it, and in each you can identify and recognise the rendering style of the RF 50mm f1.2L USM. So-called bokeh-blobs are generally well-defined shapes with this lens with crisp edges and an absence of undesirable concentric ‘onion-rings’ inside. As the objects are positioned closer to the edges and corners of the frame, the shapes quickly turn from circles to ‘cats-eye’ ovals, but this is not uncommon for most bright aperture lenses. This effect remains at the brightest aperture values, but is virtually eliminated by closing the aperture to around f2. Close the aperture a stop further and you’ll begin to see the shape of the aperture opening, revealing the ten blade system, more about which in a moment.

So far so creamy, but how does the rendering compare to the earlier EF 50mm f1.2L USM? To find out I set up a simple still-life scene with some fairy lights and shot it from a tripod using the RF lens at all apertures, followed by the EF version, adapted to fit the EOS R. Below are the images shot with each lens side-by-side for specific aperture values; note both lenses were positioned at the same distance, but the older EF 50mm f1.2L USM clearly captured a slightly wider field-of-view, due to focus breathing and differences in their actual focal lengths. 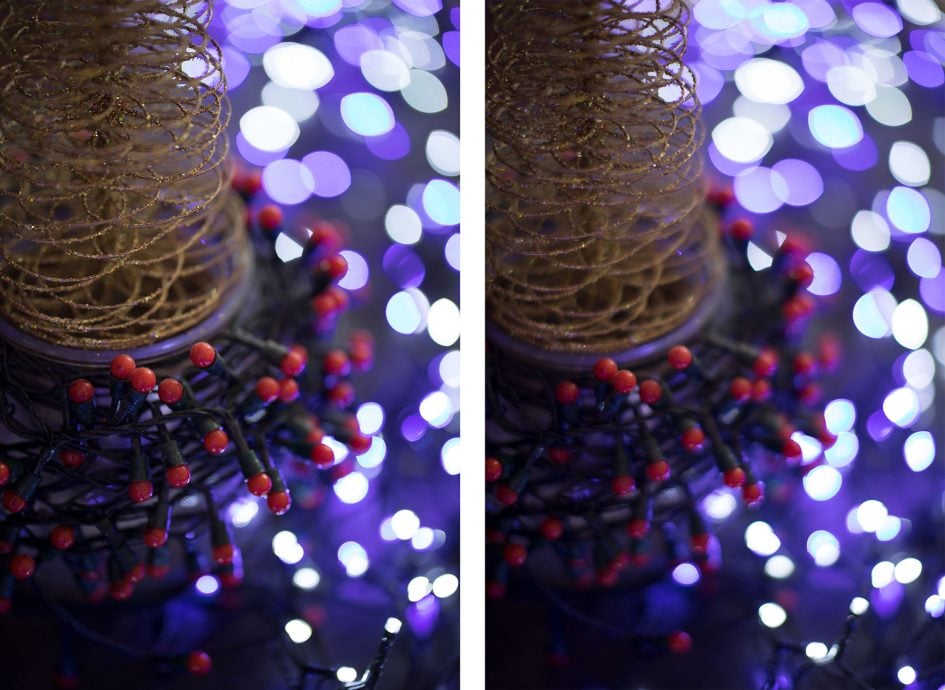 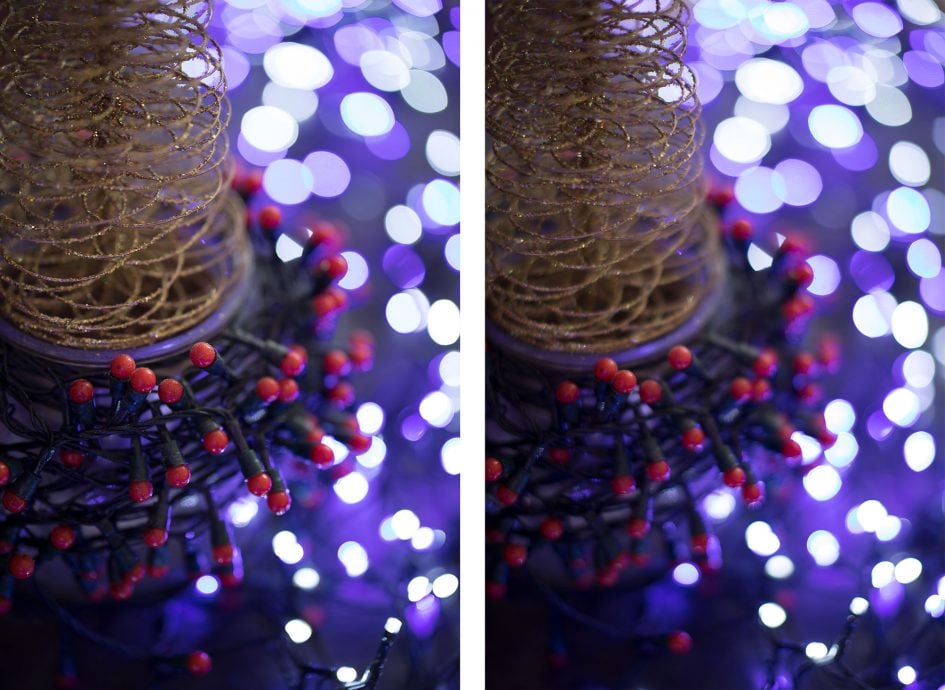 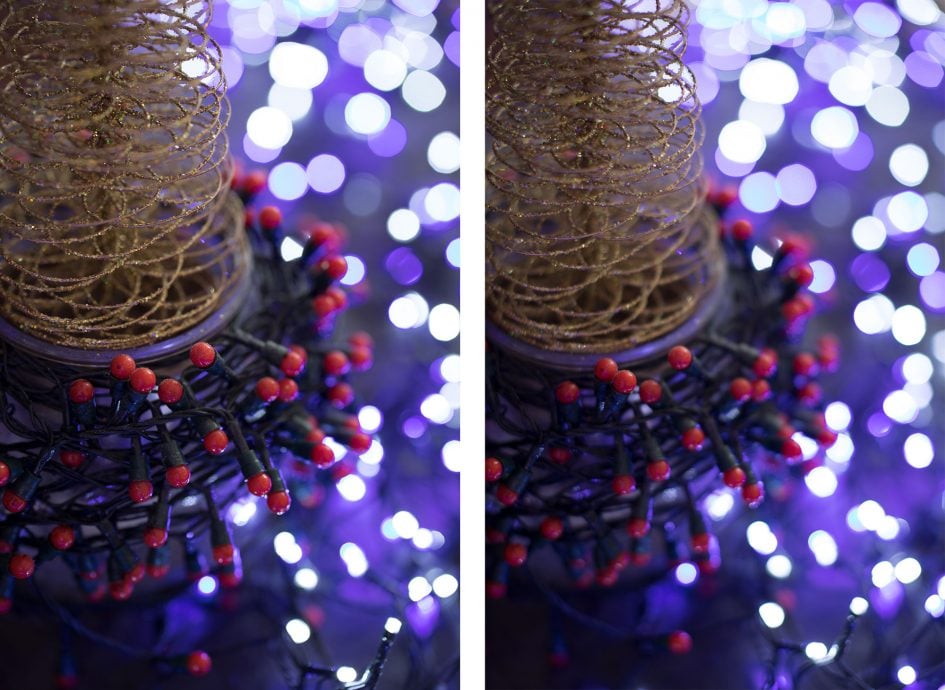 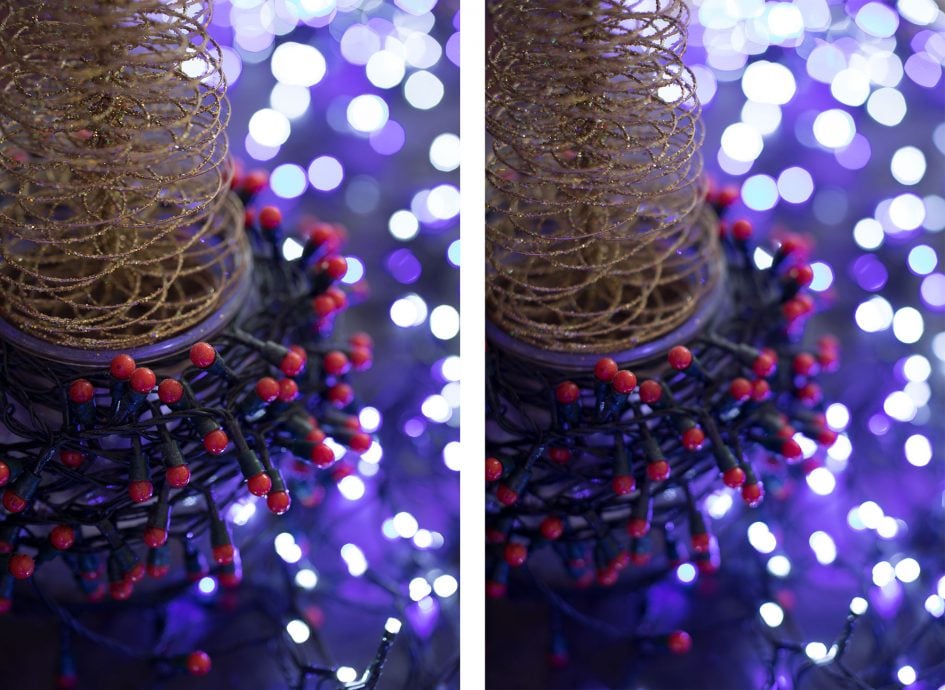 Judging from the results above, I’d say the rendering style / bokeh of the new RF 50mm f1.2L USM looks a lot like that of the earlier EF 50mm f1.2L USM; indeed I can barely tell any difference between them when viewed at this size. Look really closely at the shapes of the blobs as the aperture gradually closes and you may notice very minor differences due to their respective aperture blades.

To compare the impact of their aperture blades, I’ve taken a 50% crop from the f2 samples where their shape is best seen in this particular composition.

So in terms of rendering of blurred areas and specular highlights, I’d say both the new and the old versions of the 50mm f1.2L look pretty similar, but when it comes to sharpness across the frame, that’s a different matter. So next let’s compare their sharpness on my Quality page. Alternatively skip to my sample images or straight to my verdict.

Check prices on the Canon RF 50mm f1.2L at Amazon, B&H, Adorama, or Wex. Alternatively get yourself a copy of my In Camera book or treat me to a coffee! Thanks!
Pages: 1 2 3 4 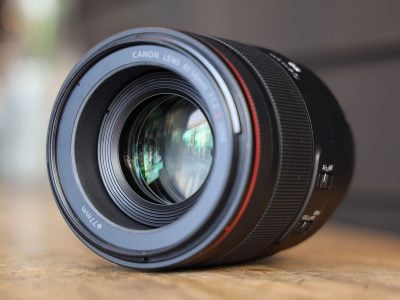 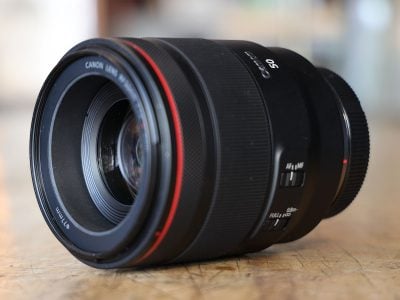 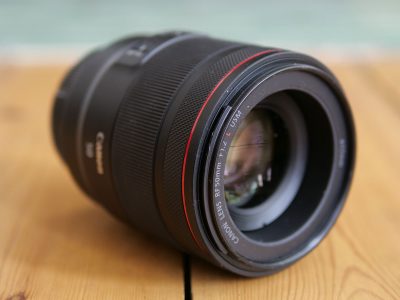