The Canon RF 35mm f1.8 IS Macro STM is a mild wide-angle prime lens for the EOS R full-frame mirrorless system, and remains the smallest, lightest and more affordable model in the native catalogue to date. Like other 35mm lenses, it’s an ideal general-purpose option, flexible enough for street, landscape, architectural, product and even wider portrait photography. Like most prime lenses, it’ll out-perform many zooms at larger apertures, while the brighter f1.8 focal ratio allows you to achieve shallower depth-of-field effects and maintain lower ISOs or faster shutters in dim conditions. Making it more useful still are macro credentials which may miss out on true 1:1 reproduction, but will deliver 1:2 or 50% magnification from 17cm which is close-enough for many of us. The icing on the cake is optical stabilisation, allowing you to handhold slower shutters or film video with ease on the unstabilised EOS R bodies. Now you can’t exactly call a $500 lens cheap, but the RF 35mm f1.8 does more than enough to justify its inclusion in every EOS R owners bag. If you’re tempted mostly for the macro capabilities though, also consider the more recent RF 85mm f2 which delivers the same 1:2 reproduction but from twice as far, which may make it more practical depending on your subject. The 85 is also more appropriate for portrait work, but personally the 35 gets my vote for its sheer flexibility as an all-rounder and comes highly recommended. In the absence of a thrifty-50, it’s as close to being a no-brainer in the RF system as I’ve seen to date.

Check prices of Canon RF 35mm f1.8 IS Macro STM at Amazon, B&H, Adorama, or Wex. Alternatively get yourself a copy of my In Camera book or treat me to a coffee! Thanks!

The RF 35mm f1.8 IS Macro STM remains the smallest, lightest and cheapest lens in the RF system to date, measuring 74mm in diameter, 63mm in length and weighing 305g, and like other 35mm lenses, is an ideal general-purpose option, flexible enough for street, landscape, architectural, portrait and product photography. Making it more useful are its macro credentials and while it won’t focus close-enough for 1:1 / 100% reproduction, it will manage 1:2 / 50% at a distance of 17cm which still lets you fill the frame with smallish objects. The f1.8 focal ratio allows shallow depth-of-field effects, especially at closer focusing distances, and the presence of optical stabilisation (with Canon claiming five stops of compensation) irons out the wobbles and makes it a more practical option for filming than the unstabilised lenses in the series. Find out why every EOS R owner will want it in their collection in my in-depth review video below. or keep scrolling if you prefer a written version!

The RF 35mm f1.8 was actually one of the first four lenses launched with the EOS R system back in September 2018, and represented the affordable end of the group. At $500 or pounds, few would describe it as bargain basement, but two years later it remains the cheapest native lens in what’s so far turned out to be a premium-priced system – and to be fair, while you could adapt the EF 35mm f2 IS, that lens actually costs roughly the same, sometimes even a tad more depending where you live.

The RF 35mm f1.8 is a pretty compact lens, measuring 63mm long, 74mm in diameter and weighing 305g; the filter thread is 52mm, but sadly there’s no weather sealing. Fit it on any of the EOS R bodies, but particularly the smallest RP and you’ll have yourself a very portable combination. For comparison, here it is next to the RF 24-105mm f4L zoom which is clearly considerably bigger.

The barrel is pretty simple with a smooth manual focusing ring in the middle and a customisable control ring towards the front – a handy feature and notable here since the subsequent 24-105mm STM and 24-240mm both reduce costs by combining manual focus and custom control onto a single switchable ring. I get the impression if the RF 35mm were designed today, it would have one, not two physical rings.

As one of the more affordable lenses in the system, Canon’s equipped the RF 35mm with an STM focusing motor, and you can see it in action in my video review above focusing for stills with the EOS R camera. Focusing is fairly swift for a lower-priced lens, but the STM motor Canon’s employed is far from silent when shooting stills as you can hear in my video. Luckily movie shooters need not be alarmed, as when filming video, the lens automatically slows down and focuses almost silently.

Moving on, the RF 35mm f1.8 has sufficiently respectable close-up focusing for Canon to add the Macro tag to its title – it was the first native RF lens to claim macro capabilities, although has since been joined by the RF 85mm f2 Macro which costs around 100 dollars more. Both lenses fall short of delivering 1:1 reproduction, but they will give you 1:2 reproduction or 50% magnification. The RF 35mm f1.8 does so from a distance of 17cm compared to 35cm on the RF 85mm, so if macro is your primary concern, you should choose the lens based on your preferred working distance.

In practice the RF 35mm f1.8 allowed me to capture a subject that measured 72mm wide, confirming the 1:2 specification from a sensor that measures 36mm in width. It’s nice and sharp too right into the corners, especially if you can stop it down as I’ve done here to f8. Apart from my formal measurement, it was refreshing to rarely if ever bump-up against the minimum focusing distance. I’m also very fond of lenses that perform double duty, in this case a good general-purpose wide prime lens with a bright aperture that also turns-in respectable close-up performance. Compare it to the earlier EF 35mm f2 which can only manage 0.24x magnification, making it less suitable for close-ups.

The f1.8 focal ratio may not reach the heights of the exotic f1.2 primes in the system but can still deliver shallow depth-of-field effects with attractive rendering – and obviously in a much more compact and affordable package. Here’s the RF 35mm with the aperture wide-open at f1.8 and from 50cm away, in order to compare it to the more distant minimum focusing distance of the RF 24-240mm later.

Closing the aperture to f2 reduces the vignette more than anything else, but as you close further to f2.8 the bokeh blbs in the corners become more circular and there’s greater evidence of the 9-blade aperture system.

I made a comparison at the closest distance all three lenses could manage, with the RF 24-240mm setting the lowest bar in this regard of 50cm; but of course both zooms can increase their focal length, so for another comparison I retested each at each of their closest focusing distances, longest focal lengths and maximum apertures at that length. Interestingly both zooms delivered similar results, first here’s the RF 24-240mm from 50cm away at 240mm f6.3, and now for the RF 24-105mm from 34cm at 105mm f7.1 where the results look very similar. But they’re a far-cry from the RF 35mm at its closest focusing distance of 17cm and wide-open to f1.8 – if you want big bokeh blobs, a bright aperture and close focusing distance easily out-weigh the longer focal lengths of the two zooms.

Next let’s see how the built-in optical IS can steady the image for photos, starting with a recording of the view with stabilisation turned off where it’s unsurprisingly wobbly, especially at close range. And now with the IS switched on, there’s a visible improvement which again not only helps you handhold at slower shutters, but also more easily frame the shot. It’s also invaluable for handheld video as I’ll show you later.

To test the optical quality, I shot a landscape scene with the RF 35mm f1.8 at all apertures, with the composition angled so that fine detail extends right into the corners. Taking a close look in the middle shows a good degree of detail, although stopping-down a little will see the resolution increase, especially from f2.8 onwards. Ok, now back to the f1.8 version and this time let’s look at the corners, where there’s a little softness, although depth-of-field can have an impact even for distant subjects. Either way, closing to f2, then to f2.8 increases the sharpness, but the big improvement in the corners here begins at f4, with further benefits at f5.6 and f8. So while the performance across the frame is respectable wide-open, I’d close to f8 for the best landscape results, or f4 at the least.

Driven by Canon’s Dual Pixel AF system, it’s also a confident focuser, and thankfully when filming video the motors slow down to become virtually inaudible – it’s quite a contrast compared to the noise it makes when focusing for stills. In this test I’ve used the touchscreen to pull-focus between the ornament and the lights behind it.

As you already know, the Canon bodies are great at face tracking. 35mm is a little long for vlogging unless you’re using a long stick, but it’s ideal for static pieces to camera from slightly further.

Check prices of Canon RF 35mm f1.8 IS Macro STM at Amazon, B&H, Adorama, or Wex. Alternatively get yourself a copy of my In Camera book or treat me to a coffee! Thanks!
Pages: 1 2 3 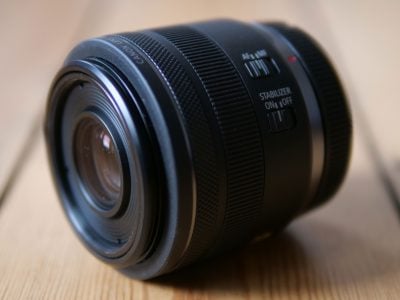 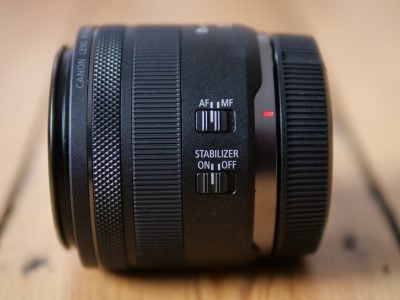 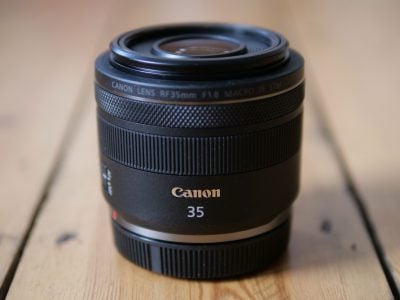