The Canon RF 24-240mm is the first native super-zoom for the EOS R system, providing the convenience of a 10x range taking you from wide-angle to respectable telephoto. No need to carry multiple lenses nor waste time swapping them, not to mention reducing the risk of dust entering the body. Longer ranges often come with optical compromises, but in my tests the RF 24-240 performed respectably, delivering good results across the frame, throughout the range and even at the maximum apertures. Sure it’s not bitingly sharp or contrasty, but equally there’s no obvious aberrations at least on out-of-camera JPEGs. To be fair, Canon is performing some fairly substantial lens corrections behind the scenes, but most of us will have them applied automatically and be none-the-wiser in day-to-day use. Ultimately the RF 24-240 may lack the glamour and quality of the larger, heavier and more expensive pro lenses, but in practice it delivers solid performance with unrivalled convenience at a decent price. Recommended.

Check prices on the Canon RF 24-240mm at B&H, Adorama, Amazon, WEX, or Calumet.de. Alternatively get yourself a copy of my In Camera book or treat me to a coffee! Thanks!

The Canon RF 24-240mm is a 10x super-zoom lens for the full-frame EOS R mirrorless system. Originally announced in mid-2019 and costing around $899 or pounds, it’s one of the more affordable lenses in the catalogue, and not only the first native RF super-zoom, but with a range that had no previous equivalent in Canon’s EF DSLR lens catalogue – sure Canon made an EF 35-350 back in the day and a later 28-300 but they were substantial L-series models costing roughly three times as much and weighing considerably more.

The native RF version is much simpler, a relatively budget 10x zoom that’s way more compact, lighter, more affordable and starts wider too. Indeed it’s a perfect general-purpose lens for the cheaper EOS R bodies, in particular the EOS RP for which it’s already become a popular kit option. In my review video below you’ll see how it performs in practice and how the quality compares to the RF 24-105mm STM, but if you prefer a written version, keep scrolling for the highlights!

Above: First let’s see that 10x range in practice, starting with useful 24mm wide-angle coverage that can capture a large subject like this stately home, before zooming-in to the maximum 240mm to really concentrate on distant details.

Above: To put it into perspective, here’s the range from the same spot using the RF 24-105mm STM which obviously starts with the same wide-angle coverage, but falls way short of its reach at the long-end. In a nut-shell, that’s the obvious benefit of the super-zoom: the ability to capture both wide and greatly magnified views with the convenience of a single lens. I can imagine many EOS RP owners mounting this lens and rarely taking it off.

Above: The 24-240 barrel can be locked at its widest focal length for transportation, although didn’t creep in my time with it. When zoomed to 240mm, the barrel extends by 70mm and despite using two sections it felt sturdy. That said, as a lower-cost lens, there’s no weather sealing on it or the 24-105 STM. The filter thread measures 72mm and behind the zoom ring is a smooth control ring that can be switched from manual focus to a custom option set in the camera menus; the smooth operation is fine for manual focus, but I missed the clicky feedback when customised to adjust settings like the aperture or ISO. Note the more expensive RF lenses generally have two separate rings for manual focus and custom control, allowing one to be smooth and the other to be clicky, but for simplicity and cost, both the 24-240mm and 24-105mm STM combine theirs into one switchable ring. Oh and as non-L lenses, neither are supplied with lens hoods.

Above: The optical design of the 24-240 consists of 21 elements in 15 groups, has seven diaphragm blades, a closest focusing distance of 50cm at the wide end or 78cm at the long end, and includes optical stabilisation which Canon claims is good for five stops. You can see it working in practice in my review video above.

Focusing is performed by a Nano USM motor which proved to be very swift and accurate. Compared to the STM focusing motor on the RF 24-105mm STM, the 24-240 was visibly snappier at focusing. When focusing during movies, the camera slows down the process for a smoother-looking result. The Nano USM motors on the 24-240mm are also virtually silent. To be fair, the STM motors on the 24-105mm were also essentially silent when refocusing. Again you can see a demo in my video review at the top of this page.

Above: To compare the potential for shallow depth-of-field effects, here’s the 24-240mm again at 35mm f4.5.

Above: Here’s the 24-20mm alongside the 24-105 STM, both at 35mm f4.5. I didn’t perfectly match the zoom on both lenses here, but as you might expect, they’re sharing a similar optical style here with a little outlining and some texture within the blobs, so nothing to really tell them apart.

Above: If you desire bigger bokeh blobs at the same focal length and distance, you’ll simply need a larger aperture, such as the RF 35mm f1.8 STM seen here wide-open at f1.8.

Above: That said, you can zoom the 24-240mm to a much longer focal length, so here’s what you’ll get when shooting at 240mm f6.3 from the closest focusing distance.

Above: But while the RF 35mm can’t zoom to a longer focal length, it can focus much closer than the other two lenses, so here it is as close as it will focus, again wide-open at f1.8 for dramatic bokeh blobs.

Above: And to illustrate the maximum possible magnification, here’s the RF 24-240mm at 240mm and its closest focusing distance.

Above: To measure and compare optical quality for distant subjects, I photographed Brighton’s seafront with both zooms on the EOS RP at a variety of focal lengths and rotated the camera so that details went right into the corners where lenses typically struggle. You’re looking at JPEGs out of camera with all lens corrections enabled. First-up the 24-240mm at 24mm and its maximum aperture of f4. Looking closely in the middle shows a good level of detail which shows only very mild improvements when closed a stop or two. As you move into the corners, the details soften a little, but not deal-breakingly so, and interestingly when you close the aperture, the quality remains much the same. So from this result, I’d say the 24-240 delivers its best results at 24mm pretty much out the gate at f4, with little to no gain in detail when closing it down.

Above: Compare the middle of the frame to the 24-105 STM on the right and they’re showing a similar degree of detail again, a result that’s also reflected as you move into the far corners. Dedicated pixel-peepers may notice the 24-240 is arguably a fraction superior here when both are at 24mm f4, but I’d essentially call it a draw here.

Above: Here’s the comparison in the corners.

Above: Now let’s zoom both lenses in a little to 50mm, starting again with the 24-240mm, here at 50mm f5. Taking a closer look in the middle again shows a decent amount of detail, and again closing down the aperture makes little to no difference to the quality in the middle. Moving out to the corner and the story is much the same. It’s a tad softer than the middle, although not as much so as at 24mm, and I’d say closing the aperture to between f5.6 and f8 will see a minor boost in sharpness to match the middle, but again the 24-240 is performing well out of the gate at 50mm.

Above: Compare the middle of the frame to the 24-105mm STM on the right when both are at 50mm f5 and again they look very similar, but this time in the corners, the 24-240 actually delivers a slightly sharper result. You can match the result by closing the 24-105 STM down a couple of stops to around f11, but at their maximum apertures the 24-240 is a little crisper in the corners at the 50mm focal length.

Above: Here’s the corner result.

Above: Now here’s the 24-240mm at 105mm f5.6, and again all looks well in the middle when you take a closer look. Closing the aperture down further didn’t make a difference in my tests. The corners were also well-behaved at 105mm, even wide-open, and again there was no perceptible gain to closing the aperture any further.

Above: Moving to the corner tells much the same story, and again neither lens improves noticeably when closing the aperture further.

Above: For my final analysis, here’s the 24-240 now at its maximum focal length of 240mm, so it’ll be viewed in isolation here.

Above: Punching into the middle of the image at the maximum f6.3 aperture shows there’s lots of detail and no complaints with image quality to mention, and as before, no visible improvement if you stop-down the aperture.

Above: Heading to the corner tells the same story, with a decent degree of detail even with the aperture wide-open and no softness to worry about. Again there’s no discernible benefit to sharpness if you close the aperture down.

Check prices on the Canon RF 24-240mm at B&H, Adorama, Amazon, WEX, or Calumet.de. Alternatively get yourself a copy of my In Camera book or treat me to a coffee! Thanks!
Pages: 1 2 3 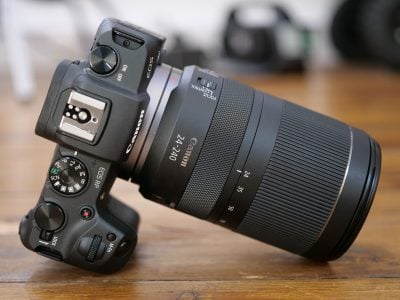 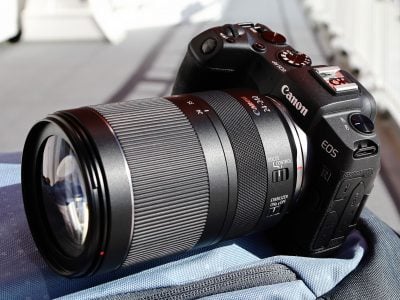 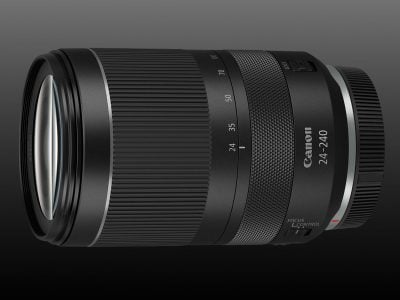