The Canon EOS R10 is a mid-range cropped-frame mirrorless camera with a 24 Megapixel APS-C sensor and 4k 60p video. In my hands-on first-looks review I'll show you everything I know so far!

Check prices on the Canon EOS R10 at B&H, Adorama, WEX UK or Calumet.de. Alternatively get yourself a copy of my In Camera book, an official Cameralabs T-shirt or mug, or treat me to a coffee! Thanks!

The Canon EOS R10 is a mid-range cropped-frame mirrorless camera with a 24 Megapixel APS-C sensor and 4k 60p video. Announced in May 2022, Canon describes it as an all-rounder, pitched roughly between the 850D and 90D DSLRs. It’s also priced quite close to the full-frame EOS RP, but the smaller more affordable sensor allows a more sophisticated feature-set.

For some people, an APS-C sensor is preferable to full-frame, not only cheaper to manufacture but effectively magnifying the view from all lenses while still maintaining the full image resolution. The R10 packs all of its 24 Megapixels into the smaller APS-C area, versus the EOS RP which may start with 26 Megapixels, but falls to around 10 when cropped to the same degree. The smaller sensors also allow more compact bodies and lenses to be developed.

Canon loaned me a pre-production R10 for this initial review, where I’ll show you around the body, controls and features. I’ll also briefly talk about the photo and video quality, but I’m leaving my full performance report until I test a final production model, after which I’ll update this page.

The EOS R10 on the left was launched alongside the higher-end EOS R7 on the right, and I also have a review of that model if you’re interested. The R7 body costs $1499 or £1349.

They jointly launch the RF-S system, a new series of mirrorless cameras and lenses designed for smaller cropped-frame APS-C sensors. It’s not compatible with Canon’s earlier EF-M system, but by employing the same mount as full-frame RF bodies, you can fit any RF lens without an adapter with their field-of-view reducing by 1.6 times. Or indeed vice-versa, with RF-S lenses also working on full-frame EOS R bodies, albeit in a 1.6x cropped mode. This is a key benefit over Canon’s EF-S lenses which were designed for APSC bodies but couldn’t mount on full-frame DSLRs.

Speaking of DSLR lenses, you can of course adapt any EF or EF-S lens, and anything you mount on the R10 will have its field of view reduced by 1.6x.

This fully backward and forwards compatibility between cropped and full-frame gear is something EF-M could never offer, and while Canon again prefers to not to burn bridges, I’d say RF-S almost certainly marks the end of EOS M development. That said, with the entry-level R10 body alone costing $979 or £899, older EOS M bodies like the M50 and M200 remain on sale as a more affordable option for those getting into mirrorless on a tighter budget.

In your hands, the R10 feels light but sturdy, although as a more affordable model, don’t expect the weather-sealing of the R7. Weighing 424g with battery, and only 560g when also fitted with the RF-S 18-45mm kit zoom, it never feels a burden to carry around. And at 123x88x83mm, it’s sufficiently compact to squeeze into smaller bags without compromising the grip which was just about tall enough to accommodate all my fingers.

The controls include a clicky shutter release and separate finger and thumb dials, the latter also home to a collar switch for power, and while the main mode dial isn’t lockable, it’s sufficiently stiff not to be turned by mistake. Like other more affordable models from Canon, you can start recording movies by simply pushing the record button, but by turning the mode dial to the dedicated movie position you’ll unlock more options.

Meanwhile, round the back, I was pleased to find an AF joystick as well as an AF-ON button, two features you don’t always see at this price point.

The fastest mechanical shutter is 4000th of a second, extendable to 16000th if you use the silent electronic shutter, albeit not during bursts where the maximum is 4000th with either shutter type.

Oh and bonus points to Canon for a new AF / MF dial by the lens mount, which is particularly handy when using the more affordable RF lenses that lack a switch of their own and previously forced you to delve into the menus. I fed that back, so thanks for listening! Pushing the button inside the dial toggles the depth-of-field preview.

Like most new Canon bodies, the R10 is equipped with a fully-articulated touchscreen which can flip and twist to almost any angle including forward to face you or back on itself for protection; it uses a 2.95in panel with 1.04 million dots.

Meanwhile the viewfinder employs a 2.36 million dot OLED with 0.95x magnification and the choice of 60 or 120Hz refresh rates. It’s an entry-level resolution for an EVF, but par for the course at this price point. Interestingly while the pricier R7 does have a larger viewfinder magnification, it shares the same panel resolution.

All the ports are behind two flaps on the left side of the body. There’s Micro HDMI and USB-C behind one, the latter supporting charging in-camera with a Power Delivery source and I checked it works with my Samsung phone and Apple MacBook chargers. Behind the other is a remote jack port and 3.5mm microphone input, but there’s no headphone jack – for that you’ll need the R7.

Meanwhile the hotshoe, inherited from the EOS R3 and R5C, supports additional accessories including microphones with direct audio connections. The R10 also includes popup flash, a handy feature missing from the pricier R7.

The single SD card slot, exploiting UHS-II speeds, and the battery are housed within a compartment beneath the body. The R10 is powered by the LP-E17 battery, quoted as delivering up to 430 shots with the screen or 260 with the viewfinder under CIPA conditions, and again you can charge it in-camera over USB Power Delivery.

Which brings me to the sensor: APS-C sized and sporting 24.2 Megapixels. This is based on the same sensor in a wealth of Canon bodies including the M50 II, with much the same resolving power, but Canon claims to have improved the microlenses and circuitry which, coupled with the newer DIGIC X processor, may provide faster speed and lower noise. I’ll test that in part two of my review.

Unlike the higher-end R7, there’s no sensor-based IBIS stabilisation on the R10, but at least both RF-S zooms feature optical stabilisation, and there’s also optional digital compensation for movies. Like many more affordable mirrorless cameras including the RP, the R10’s sensor is also exposed when powered-down. This is to protect the shutter blades which are actually more fragile than the sensor. Generally the shutter only closes when powered down on higher-end models like the R7.

In terms of photo quality, you can record 24 Megapixel images with 6000×4000 pixels in either JPEG, HEIF or 14 bit RAW formats. Compressed RAW and lower resolution JPEG or HEIF options are also available.

Impressively the R10 shares the same mechanical shooting speed as the higher-end R7, firing off up to 460 JPEGs or 29 RAWs at 15fps using the mechanical shutter, and here’s how that sounds.

Alternatively you can switch to a fully electronic shutter and enjoy up to 70 JPEG or 21 RAWs at 23fps at the full 24 Megapixel resolution, and with the benefit of potentially silent shooting; you can however have a sound effect if you like and here’s how that sounds.

The R10 also has an electronic RAW burst option at 30fps with the option to enable a half-second pre-shot buffer so you don’t miss the moment, say, a bird takes flight. Unlike the higher-end R7, the RAW files in this burst mode are cropped to 75%.

The R10’s autofocus sports coverage across the entire frame, and supports human, animal or vehicle detection. The R10 also includes multiple exposures and focus bracketing, as well as interval and Bulb timers. There’s even a built-in auto-stitching panorama mode, the first time on an EOS camera.

I’m waiting for a final production model before evaluating the quality and performance, but for now, here’s a shot I took with a pre-production R10 and RF-S 18-150mm zoom which shares the kind of detail we’ve seen from other 24 Megapixel Canons.

Moving onto video, the R10 will film uncropped 1080 at 24 to 60p or uncropped 4k at 24 to 30p. There’s also 4k at 50 or 60p, albeit incurring a further crop, although this will give you even extra reach for that distant wildlife. Canon says the uncropped 4k up to 30p oversamples from 6k’s worth of data.

There’s also high-frame rate video in 1080 at 100 or 120p, that’s automatically slowed four times and encoded at 25 or 30p respectively. There’s no sound in this mode.

In a very welcome update, the R10 dispenses with the old 30 minute recording limit and will now keep recording up to a maximum of two hours per clip, assuming you don’t run out of power, memory or become overheated.

You can see my pre-production R10 sailing past 30 minutes here when filming in the 4k 25p mode. The smaller battery means you’re unlikely to get beyond an hour of 4k though, and you can see here the battery icon flashing as I approach 60 minutes. You’ll also see the new temperature meter, helpfully indicating how close you are to overheating with a ten-segment scale, here currently at two bars and the camera only feeling a little warm. If memory and cooling aren’t an issue, you can theoretically record up to two hours under USB power, but under a full battery charge alone I managed to record a single 4k clip lasting 58 minutes and 49 seconds. On the R7 the battery lasted roughly double the time.

As I mentioned earlier, the EOS R10 may lack IBIS, but it does have digital movie stabilisation, so to try it out here’s a clip I filmed with an adapted EF 50mm f1.8 STM lens which doesn’t have any optical stabilisation of its own, so this first clip is complete unstabilised and rather shaky.

And now with Digital Movie IS enabled on the R10 which understandably incurs a crop but makes the view much steadier. And finally using Enhanced Digital IS mode with an even tighter crop which may provide further benefits depending on how you’re holding the camera.

Which brings me to the end of part one of my R10 review. Once I’ve fully tested a final production model, I’ll update this page, plus of course I have my hands-on reviews of the R7 and the two RF-S zooms for you too.

My first impressions of the R10 are certainly promising with it offering a decent array of features and controls for the money. Sure it’s similarly-priced to the EOS RP, but you may prefer to trade the full-frame sensor for a more feature-packed body, while the smaller sensor will be beneficial if you’re shooting small and distant subjects. And while RF-S effectively kills EF-M, Canon frankly had to pull-off the band-aid and develop a new line that’s forwards and backwards compatible with full-frame, like Sony and Nikon. It’s frustrating for EOS M, but the right long-term move for Canon.

Check prices on the Canon EOS R10 at B&H, Adorama, WEX UK or Calumet.de. Alternatively get yourself a copy of my In Camera book, an official Cameralabs T-shirt or mug, or treat me to a coffee! Thanks! 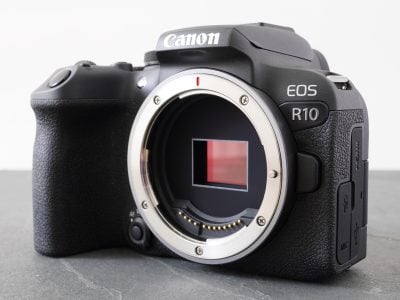