The Canon EOS M50 is a mid-range mirrorless camera with a 24 Megapixel APSC sensor, Dual Pixel CMOS autofocus, built-in OLED viewfinder, Wifi and Bluetooth, and becomes Canon’s first mirrorless with 4k video, a fully-articulated touch-screen, eye detection and silent shooting options. It may be pitched as an upper entry-level model, aimed at those buying their first interchangeable lens camera, but I reckon it’s Canon’s most compelling mirrorless camera to date.

I’ll get the downsides out of the way right now: the battery is fairly low-powered and there’s no USB charging so you’ll need to remember to carry the AC charger or a spare pack. There’s still no panorama function, and the new eye-detection and silent shooting modes are fairly basic and don’t work with continuous autofocus. Most notably, the 4k video is of very limited use, sadly not working with Dual Pixel CMOS AF (thereby relying on less confident contrast-based autofocus) and employing a severe crop of 1.56 times (or more if you enable the quality-busting digital stabilisation). Indeed unless you’re happy to shoot from a tripod and don’t need wide-angle coverage, it’s best to forget about 4k video here, especially if you were thinking of handheld vlogging with it.

But these aside, the EOS M50 is actually a highly compelling camera that’s very enjoyable to shoot with. The body, available in black or white, is compact but surprisingly comfortable to hold. The viewfinder is small, but crisp, and the side-hinged touchscreen is as useful to vloggers as it is to photographers wanting to compose easily at high or low angles in landscape or portrait orientations. The autofocus is effective still photos and 1080p video, the touchscreen interface works very well, and the wireless capabilities with Bluetooth running the show is arguably the best in the business. I took it away for several weeks while travelling through Europe and really enjoyed my time with it. 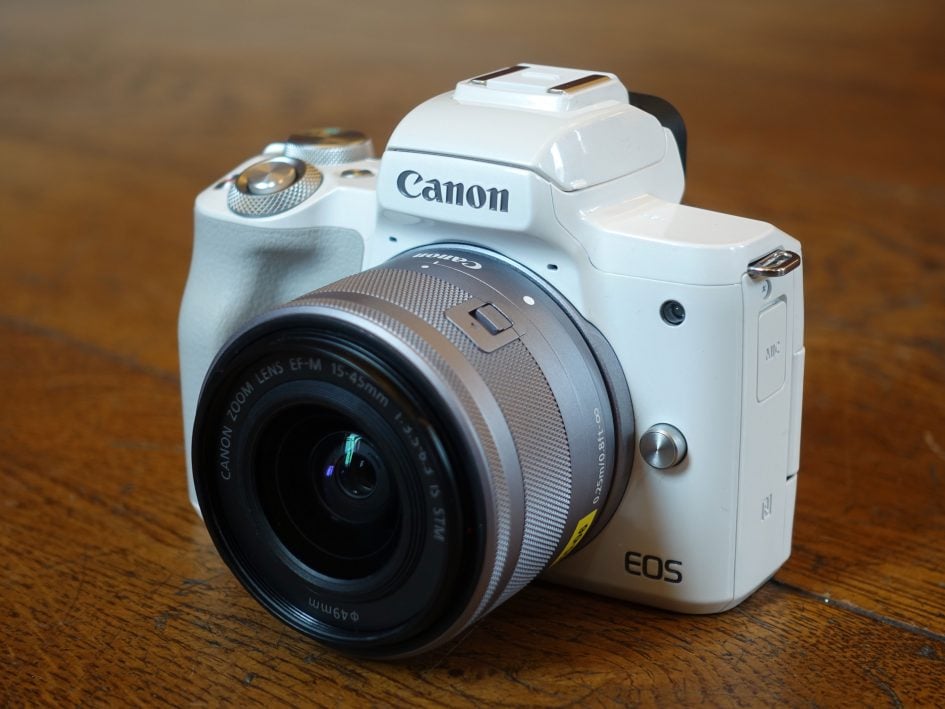 Photo quality is, as expected, very similar to other Canon 24 Megapixel APSC models. The default JPEG processing can be a little soft and benefits from a little extra sharpening, but there’s no arguing with Canon’s colour science that simply delivers very good looking images with no effort. You can check out a wide variety of JPEGs out-of-camera on my samples page, and it’s so nice to seamlessly tag them with GPS positions over Bluetooth; indeed the camera’s size, great colours and easy tagging make it ideal for travel.

4k video can look good if you shoot from a tripod without digital stabilisation, but as noted earlier, is of limited use thanks to the severe crop and basic autofocus. But 1080 video looks great and refocuses confidently thanks to Dual Pixel CMOS AF.

I’ve mentioned them already, but vloggers will love the M50 with its large APSC sensor, confident autofocus with face detection, forward-facing screen, and microphone input. Once again while the 4k video sadly isn’t practical for vlogging, if you switch to 1080p, you’ll be delighted. 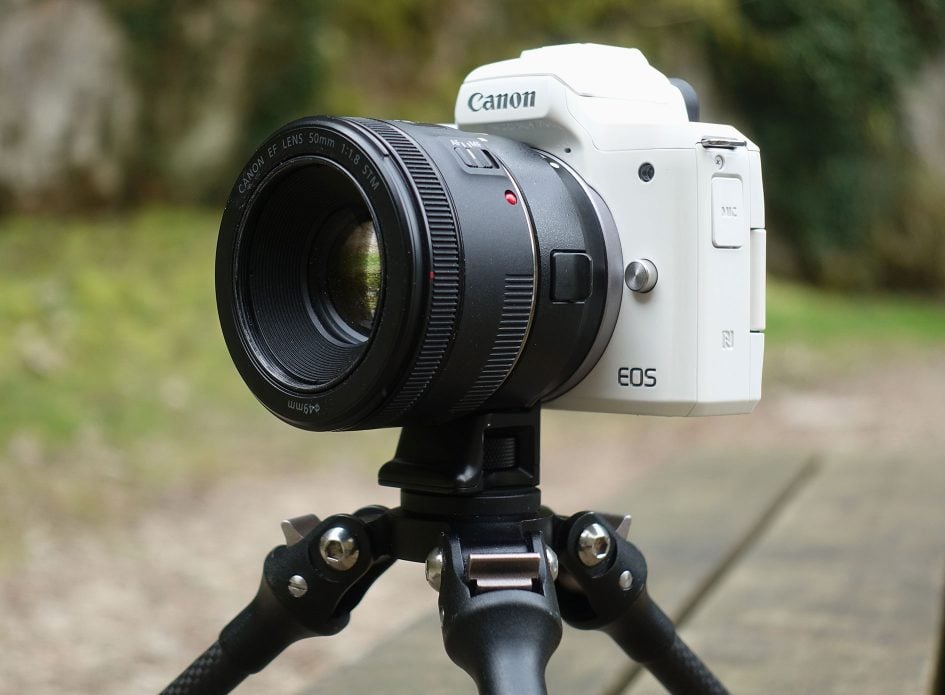 Canon’s native EF-M lens catalogue remains rudimentary with just seven models at the time of writing, only two of which were primes. Canon really needs to introduce more native lenses, most urgently standard and short telephoto primes with bright apertures. But in the meantime, the EOS M50, like other Canon mirrorless cameras, works very well with traditional EF lenses via Canon’s adapter; indeed this makes it a very tempting option for existing Canon owners looking for a small body to complement a DSLR or make a gradual switch to mirrorless.

Before my final verdict, there’s some key rivals to compare the EOS M50 against.

Sony’s A6300 is priced only a little higher than the EOS M50 and delivers superior video and burst performance. There’s no crop when filming 4k in 24 or 25p, and it can also exploit the excellent autofocus system too. Slow motion is available in 1080p too rather than just 720p, and there’s a flat S-Log profile too for anyone who wants to grade their video. Like the M50, there’s a 24 Megapixel APSC sensor, an OLED viewfinder, Bluetooth for easy GPS tagging and a 3.5mm microphone input. Burst shooting is faster at 11fps with continuous AF, or 8fps with live feedback, and you can both charge and power the camera over USB. So far the Sony sounds stronger, but the screen isn’t touch sensitive, nor will it flip forward to face the subject, making vlogging difficult. The pricier A6500 adds a touchscreen, but it still doesn’t flip forward. So if you’re serious about video or action, the A6300 is better-featured, but for vlogging, the M50 is superor – and I preferred the way it looks too. See my Sony A6300 review for more details.

Panasonic’s Lumix G80 / G85 costs almost the same as the EOS M50, so is another key rival. Like the M50 it features a side-hinged touchscreen that can flip to face the subject, an OLED viewfinder and a 3.5mm microphone input, and like the Canon, there’s no USB charging in-camera. The Lumix sensor is smaller and lower resolution (16 Megapixel Micro Four Thirds), but the quality is similar at all but the highest sensitivities and crucially the sensor is stabilized within the body. The Lumix also delivers better 4k with a slightly lower crop factor even with the smaller sensor taken into account, boasts Panasonic’s clever 4k photo modes, and is also bundled in a kit with a broader 12-60mm / 5x zoom. The EOS M50 fights back with more confident autofocus for 1080p video and a larger, more detailed sensor. See my Lumix G80 / G85 review for more details.

Fujifilm’s XT20 cost a little more than the M50 at the time of writing, but remained in a similar ballpark. Like the M50 it has a 24 Megapixel APSC sensor, OLED viewfinder, and microphone input, albeit with a less standard 2.5mm jack. The screen only tilts vertically and isn’t touch-sensitive, and the Wifi is very basic, but there is USB charging. 4k and 1080p video are limited to 10 and 15 minute clip lengths respectively, but 4k works with a more reasonable crop and can also employ more confident autofocus, at least in the centre area of the frame. Fujifilm’s real benefits though are the arguably better image colours, physical controls, retro styling and native lens quality. See my Fujifilm XT20 review for more details.

Another rival for Canon’s EOS M50 is the company’s own EOS 200D / Rebel SLR DSLR. Launched a year earlier, it’s selling at a lower price, yet shares a 24 Megapixel APSC sensor with Dual Pixel CMOS AF, a side-hinged touchscreen, great-looking 1080p video with confident focusing, a microphone input, Bluetooth to control the Wifi, and a viewfinder, although as a DSLR it’s optical not electronic. It may not sport 4k, eye-detection, silent-shooting, nor shoot as fast as the M50, but it does have everything you need for effective vlogging in 1080p, as well as matching the image quality and easy location tagging of the M50; it’s also important to note if you’re adding an ultra-wide zoom, the EF-S 10-18mm model (for DSLRs) is cheaper than the EF-M 11-22mm option (for mirrorless). A great option for anyone on tighter budgets, or who simply prefer the optical viewfinders of DSLRs. See my Canon EOS 200D Rebel SL2 review for more details.

The Canon EOS M50 is an upper entry-level mirrorless camera with a 24 Megapixel APSC sensor, confident autofocus (for stills and 1080p video), small but crisp OLED viewfinder, excellent wireless, and becomes Canon’s first mirrorless with 4k video, a fully-articulated touch-screen, eye detection and silent shooting options. Sadly the 4k is of limited use, employing a severe crop and only working with less confident contrast-based autofocus. I’m also frustrated there’s no USB charging, especially since the battery is fairly weak. 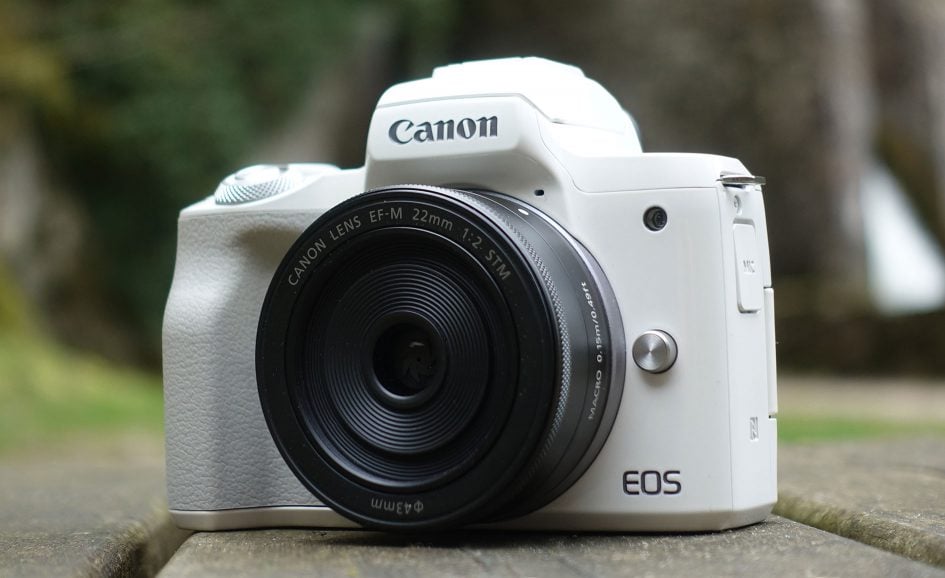 But these aside, the EOS M50 remains a highly compelling model with a compact but comfortable body, effective touchscreen, industry-leading wireless, confident focusing for 1080p video, and great colours out-of-camera. Indeed the M50 may be pitched as an upper entry-level model, but I reckon it’s Canon’s most compelling mirrorless to date. Coupled with a hotshoe and microphone input, the M50 will be as popular with vloggers as it is with those looking for an upgrade from smartphone photography. Recommended.

Check prices on the Canon EOS M50 at Amazon, B&H, Adorama, or Wex. Alternatively get yourself a copy of my In Camera book or treat me to a coffee! Thanks!
Pages: 1 2 3 4 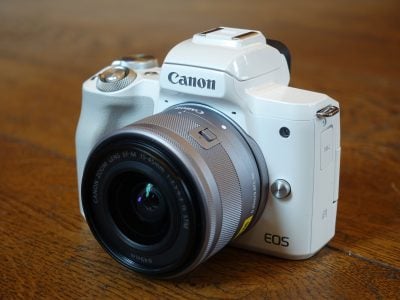 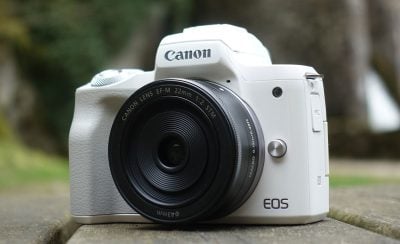