The EOS M3 is Canon’s most serious mirrorless camera to date. It takes on board many of the issues with the original EOS M, makes a raft of improvements and ends up delivering an experience that’s so much more satisfying – although as I discovered, still with some faults that could break the deal for some photographers.

At a time when many new cameras represent very minor updates over their predecessors, it’s refreshing to discover just how much Canon has improved on the EOS M3. Pick it up and you’ll notice the chunkier and more comfortable grip straightaway. Start setting-up the camera and you’ll appreciate the presence of dedicated mode and exposure compensation dials, along with three customizable buttons. During composition you’ll appreciate the convenience of a screen that now tilts 45 degrees down or up by 180 degrees to face you for selfies or filming pieces to camera. Prefer to compose with a viewfinder? You can now slot one onto the hotshoe. Need more light? There’s now a popup flash. Half-press the shutter release and you’ll notice the focusing is faster than before. Fancy sharing an image? Wifi with NFC makes it a doddle and once you get your photos on a bigger screen you’ll also notice they’re packed with detail and low noise.

Believe it or not, these features are all new to the EOS M3 over the original EOS M, making it a much more powerful and usable camera. Of course the original M wasn’t all bad, and the M3 inherits (and enhances) its excellent touch-screen interface, along with continuing support for Speedlite flashguns on the hotshoe, along with the entire EF lens catalogue via an optional adapter. 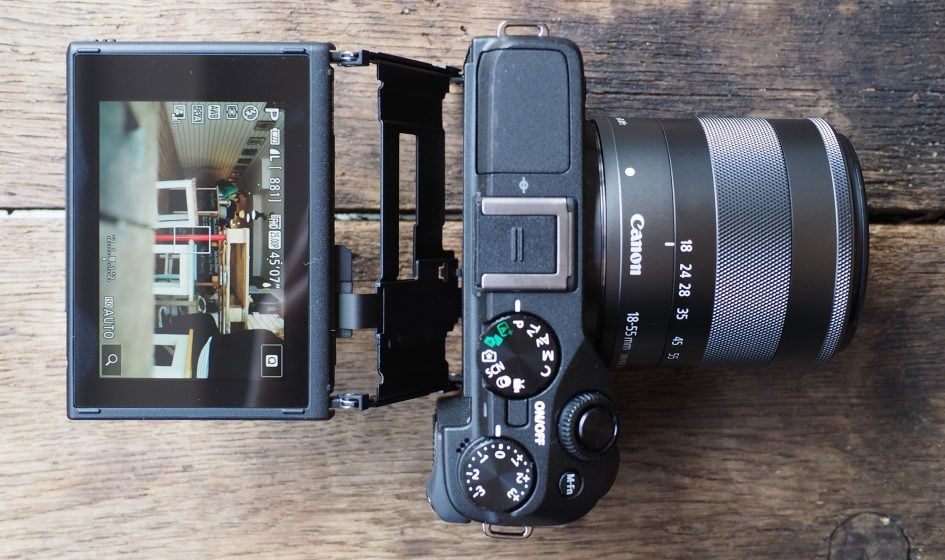 But for all the improvements there’s a number of annoyances to take into account. I’ll start with the autofocus, one of the worst aspects of the original EOS M. Canon has certainly improved it a lot on the EOS M3, with the camera locking-on in less than a second in good light, but it’s still slower than rival mirrorless systems and becomes less confident than many of them in low light. Switch it to Servo AF for tracking moving subjects and the continuous shooting speed also plummets to around 2fps, which is considerably slower than, say, the Sony A6000 which manages to keep subjects in focus even when shooting at 11fps.

I’m pleased Canon’s fitted an articulated screen and now allowed a viewfinder to be mounted on the hotshoe, but when comparing the M3 side-by-side with the Sony A6000 again, you can’t help but wish the viewfinder were built-in. Indeed with its more compact kit, faster shooting, better tracking and built-in viewfinder, it’s hard to walk past the Sony A6000 at much the same price point. See my Sony A6000 review for details.

The battery life was an issue with the original EOS M and remains a problem here. I rarely managed to squeeze more than 200 shots per charge when combined with minor movie and Wifi use, but worse the battery life indicator frequently jumped from two bars to flashing red before expiring a few shots later. Since it’s not possible to top-up over USB, the EOS M3 really needs a more reliable battery meter.

I should also mention that while the EOS M3 and EF-M 18-55mm IS STM zoom delivered good-looking images, there was evidence of a mild green cast towards the edges of the frame when shooting at the widest focal length. I’m doing more tests to try and get to the bottom of it, but in the meantime do check my sample images to see if it’s going to be an issue for you – it’s there if you look for it, but I don’t think it’s a deal breaker.

Arguably the biggest issue with the EOS M3 though is the EF-M system itself: almost three years after launch, there’s still only four lenses, three of them are zooms with non-aspirational apertures, and two of them aren’t on sale in the USA. The only prime lens is a 35mm equivalent f2, making it the only semi-fast lens in the system. Sure you can mount existing EF and EF-S lenses via an optional adapter, but in doing so you lose a lot of the portability and charm of a smaller system, and in my tests with the EF 85mm f1.8 and EF-S 18-55mm the focusing slowed down and also became unusable for continuous tracking. I believe the focusing is improved if you adapt lenses with STM focusing, but that greatly reduces the available options, and again there’s still the physical bulk of the lens plus adapter. 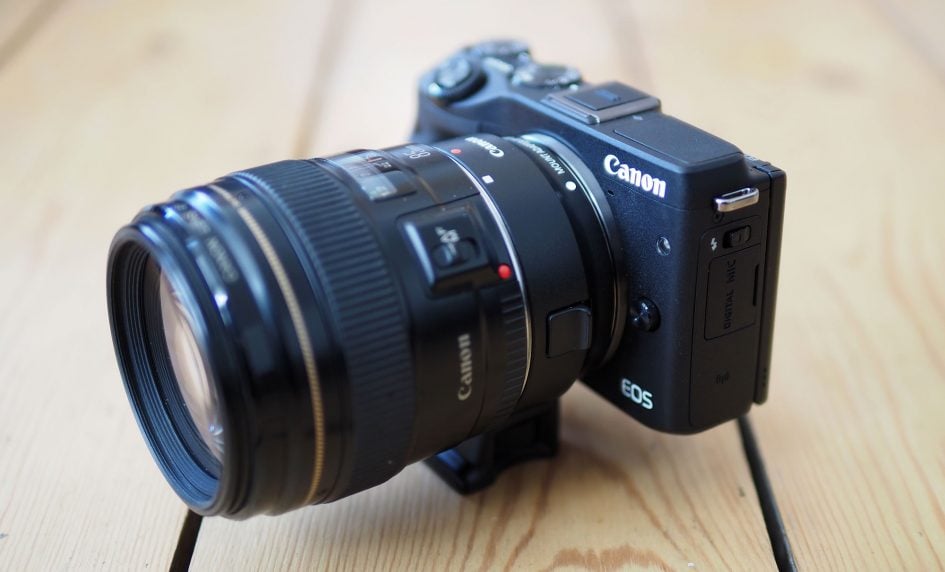 It’s also important to remember the EOS M(3) isn’t the only game in town if you want to mount EF lenses. Metabones offers an adapter for Sony’s mirrorless cameras that supports AF (albeit a little more slowly) and Kipon is producing one for Micro Four Thirds bodies with AF too. If you’re happy to manually focus EF lenses, there are adapters for almost any mirrorless system.

But the bottom line is you still can’t beat the experience of using native lenses, and EF-M is sadly lacking in this department. Where are the fast primes? The portrait lenses? A macro option? The pro-grade zooms? If Canon’s aiming the EOS M3 at enthusiasts, these are the lenses they desire. To confirm the point, I shot the EOS M3 with the EF 85mm f1.8 USM alongside a variety of Micro Four Thirds cameras with the Olympus 75mm f1.8 and the difference was plain to see. The end-results may have been similar, but the MFT combination focused considerably faster, worked in lower light, and was also much more compact. I experienced the same with Sony and Fuji mirrorless options too. Native lenses are the answer for the best experience.

Canon needs to show more commitment to the EF-M system if it’s going to attract enthusiasts, and it doesn’t help that new products aren’t getting worldwide distribution. The ultra-wide and telephoto EF-M zooms didn’t make it to North America, the earlier EOS M2 was for Asia only, and now the EOS M3 looks like it won’t be sold in the US either, at least from domestic dealers. Interested buyers in the US can still import the camera from stores like Digital REV (and doing so via my link below will support my work), but for now the EOS M3 still feels like a partner for an existing Canon DSLR system as oppose to something which could appeal to a new buyer who doesn’t own any EF lenses.

If you do have an existing EF lens catalogue and fancy a smaller body to try them with, then the EOS M3 is a good choice, and I commend Canon for making so many improvements over the original body. The EOS M3 is a confident step-forward, and with a greater selection of EF-M lenses (or even a promising roadmap) it could certainly become a contender as a standalone camera. But if you’re looking to build a new system that gives you all the benefits of mirrorless, then you should invest in Olympus, Panasonic, Fujifilm or Sony, all of whom have dumped their legacy DSLR baggage and are concentrating on delivering a more compelling native experience.