The Canon EOS M200 is an entry-level mirrorless interchangeable lens camera with a 24 Megapixel APSC sensor, tilting touchscreen and cropped 4k video. Successor to the EOS M100, it inherits the same body with its tilting touchscreen and the same sensor with Dual Pixel CMOS AF for confident focusing whether shooting photos or 1080p video. New to the M200 is the DIGIC 8 processor which brings eye-detection, more AF points and 4k video, although interestingly with the earlier M50’s limitations so 4k is only available in 24p, applies a significant crop and lacks Dual Pixel AF; as such for the best focusing in video and broadest coverage, you’ll be shooting in 1080p. The M200 also inherits two small but useful features from the G7X III: a movie record button on-screen when it’s facing you for vlogging, and support for vertical video in portrait apps like Instagram Stories and IGTV. The M200 represents a mild update over the M100, but enjoys its position as Canon’s smallest, lightest and cheapest mirrorless in the current range. That said, if you don’t need the updates, keep an eye open for discounts on the older EOS M100.

Check prices on the Canon EOS M200 at Amazon, B&H, Adorama, or Wex. Alternatively get yourself a copy of my In Camera book or treat me to a coffee! Thanks!

The Canon EOS M200 is an entry-level mirrorless interchangeable lens camera with a 24 Megapixel APSC sensor, tilting touchscreen and cropped 4k video. Launched in September 2019, it replaces the two-year-old M100 to become the smallest, cheapest and most beginner-friendly model in the current EOS M lineup; note the older EOS M100 will continue while stocks last, so keep an eye out for bargains.

The new EOS M200 shares a great deal with its predecessor, including essentially the same body with its tilting touchscreen and the same 24 Megapixel APSC sensor with Dual Pixel CMOS AF for confident focusing whether shooting photos or 1080 video and burst shooting up to 6fps with single AF or 4.1fps with Servo continuous AF. New to the M200 is the latest DIGIC 8 processor, allowing finer AF points, eye detection and 4k video, although interestingly the M200 appears to inherit the 4k limitations of the earlier M50 so it’s only available in 24p, with a substantial crop and sadly lacking Dual Pixel AF, instead relying on a less confident contrast-based system. Like the PowerShot G7X III, the M200 will also display a movie record button on-screen when it’s facing you for vlogging (a small but considerate addition) and also supports vertical video for portrait apps like Instagram Stories and IGTV.

As before, there’s no built-in viewfinder, no mic input and the control system is very simple, mostly relying on the touch screen. There is of course built-in Wifi and Bluetooth though, allowing easy connectivity with your phone for remote control, image or video transfer and location tagging. Overall the M200 represents a mild update over its predecessor, but the key here, as before, is to provide a large APSC sensor with good autofocus (at least for 1080 video), a tilting selfie-screen and great wireless connectivity at a relatively low price, making it an ideal step-up from photography and vlogging with a phone. Available in black or white and weighing just 299g including battery, it’ll be sold from October 2019. In my full review video below I’ll show you everything you need to know about the camera, or keep reading if you’d prefer the written version that follows. As always use the tabs above to head straight to my sample images or verdict pages! 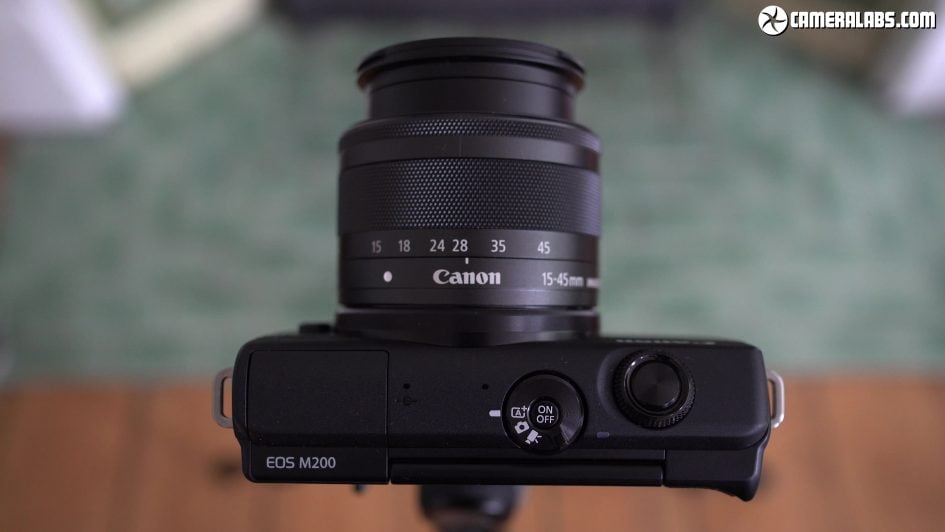 Above: Externally the M200 is essentially identical to its predecessor with the same top panel featuring a popup flash, shutter release with a nice clicky finger dial and a single mode dial with a power button in the middle and just three shooting positions. 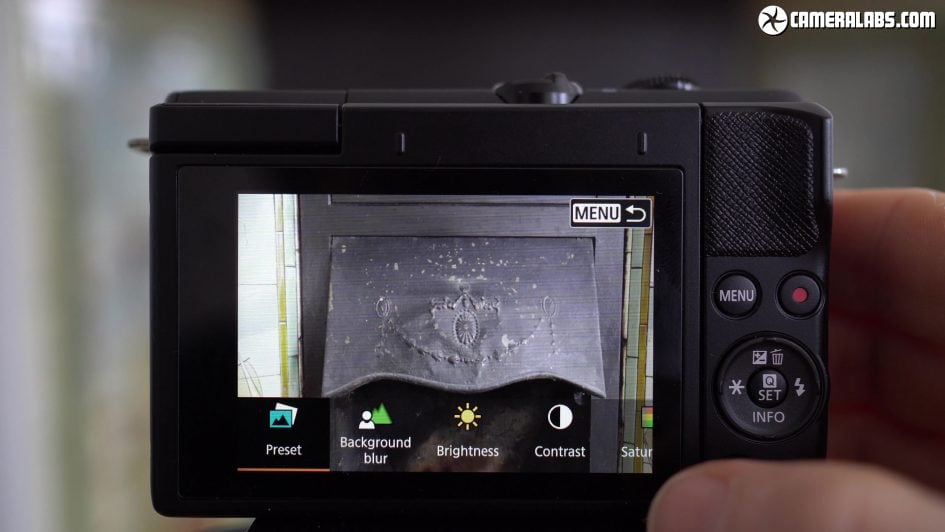 Above: The first mode is fully Automatic, using scene detection indicated in the top left corner; there’s also touch controls for drive mode, image quality and touch shutter in the bottom left. What makes this mode more than just automatic though are the Creative Assist options. Tap the colourful icon in the lower right corner and the M200 will guide you through a wealth of adjustments to the picture style, background blur, brightness, contrast, colour tone and monochrome options, all with intuitive sliders or icons to tap away. It’s a fun and easy interface designed to feel familiar to anyone who uses phone camera apps and lets beginners make the most of the camera’s functions; I particularly liked the monochrome options with the various colour tones. This Creative Assistance was however available on the earlier M100. 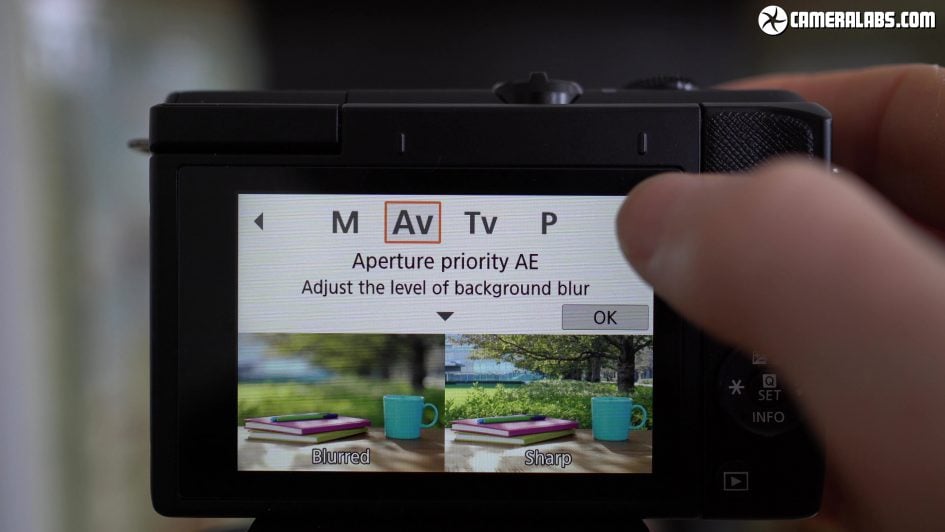 Above: The second mode unlocks full exposure control with access to the traditional Program, Aperture, Shutter Priority and Manual modes, letting you choose the aperture, shutter and ISO sensitivity settings. This mode also gives you access to a bunch of scene presets along with the miniature and HDR modes, and the silent mode which uses an electronic shutter to shoot in genuine silence – albeit with some risk of skewing if your subject or camera are in motion. 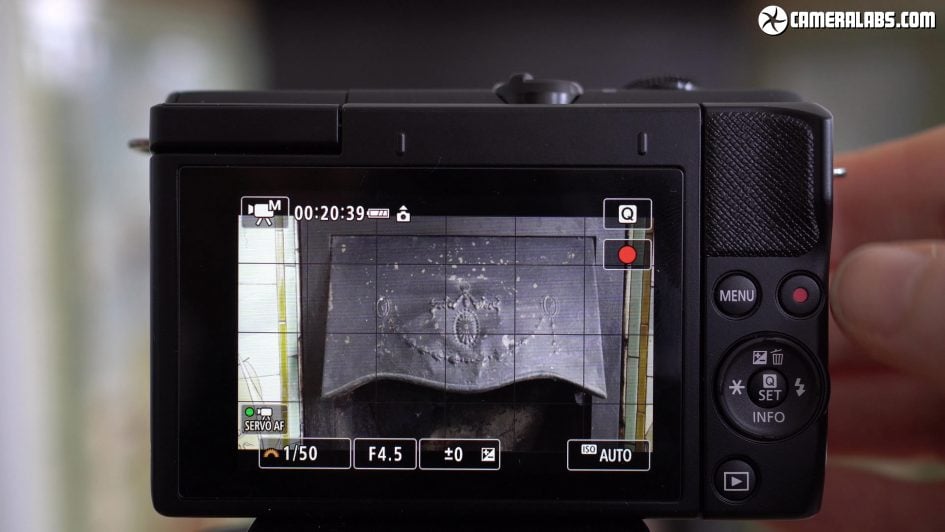 Above: The third mode is dedicated to movies and lets you choose from fully automatic or Manual, the latter again allowing you to select the shutter, aperture and ISO values yourself for full control if desired. Eagle-eyed Canon fans will also notice the Wifi button on the previous M100 now becomes a dedicated movie record button on the M200, although Canon’s also added a touch record button on the screen too which is very convenient when filming with the screen flipped-up to face you. The two record buttons are the only control differences with the M100. 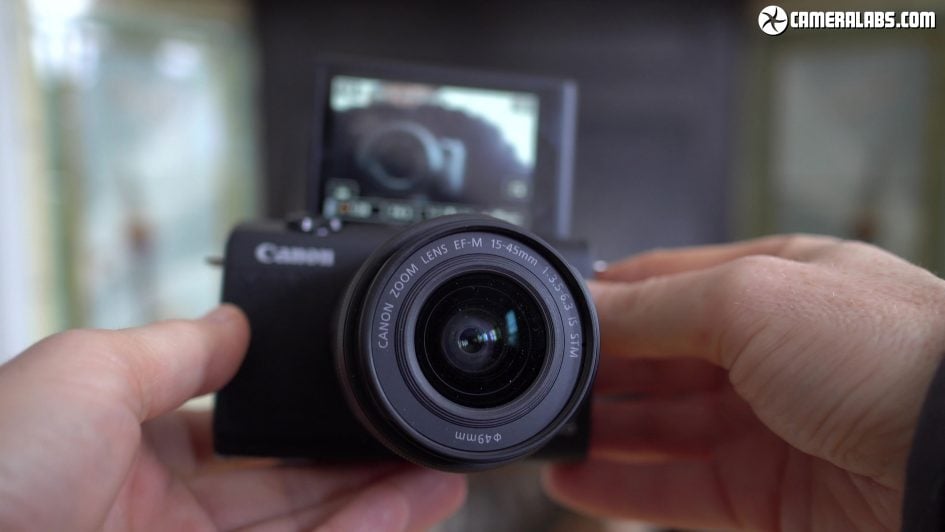 Above: There’s no viewfinder at this price point, so composition is with the 3in touchscreen only, which like the M100 can angle-up by 180 degrees for selfies and vlogging. In the absence of a hotshoe for mounting accessories, there’s nothing to block the screen in this position, and I found I could easily vlog with it. You can also compose comfortably at low positions, although the screen won’t angle downwards for easier shooting over the heads of crowds. 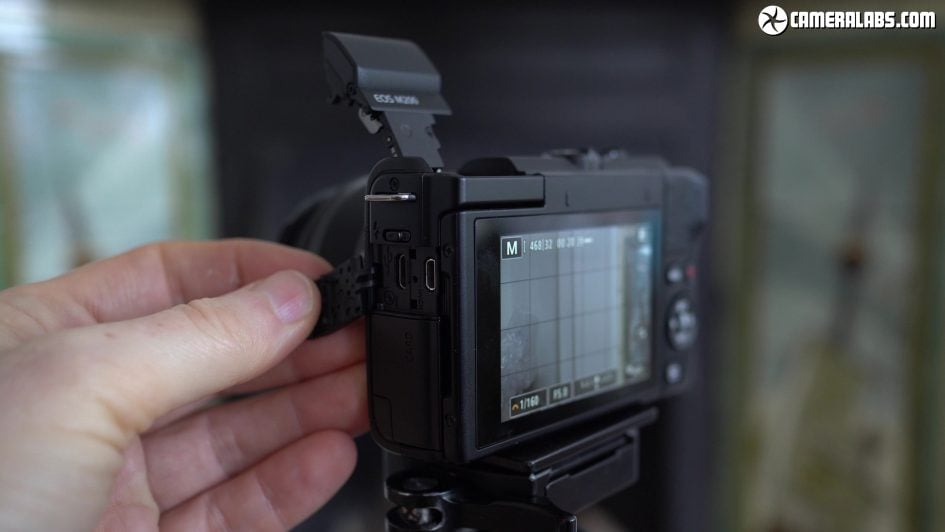 Above: On the left hand side you’ll find a switch to popup the built-in flash and if you like you can angle the flash head back by hand for an improvised bounce. Below this is a small flap for the M200’s only ports: Micro HDMI and Micro USB. Sadly like the M100 before it, the M200 is not chargeable over USB, so you’ll need to use the supplied AC charger, and there’s no mic input either. And finally the memory card slot is actually housed behind a door at the bottom, although you may need to angle the screen out a little to access it more comfortably. 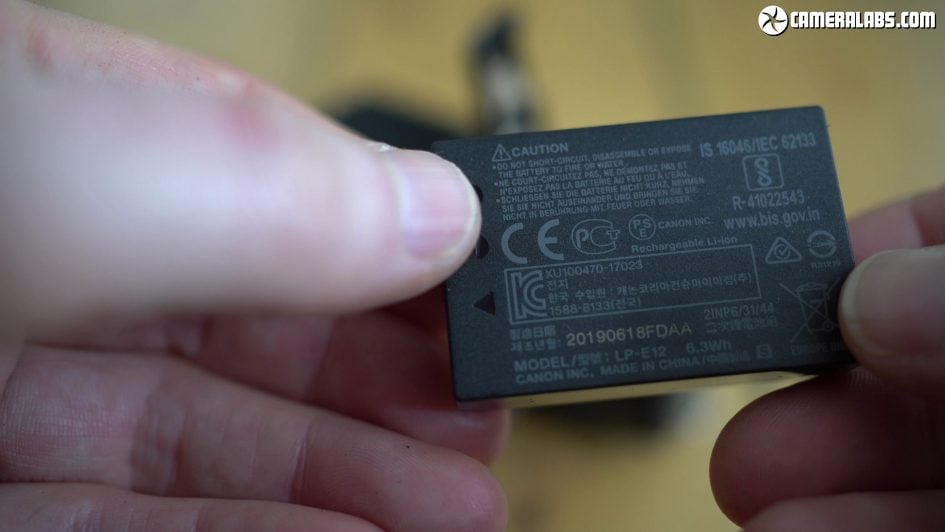 Above: The battery alone is housed in a compartment under the camera, and is good for around 300 shots. In terms of video Canon quotes 90 minute’s worth per change, but I managed five consecutive half hour clips of 1080 video – or two and a half hours – before the battery icon started flashing and expired a few minutes later. 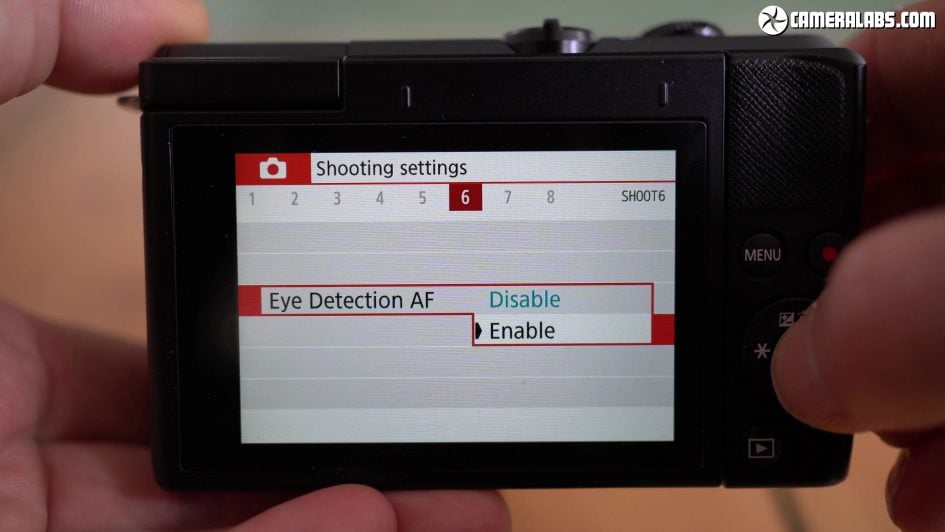 Above: Like the M100 before it, the M200’s sensor sports Canon’s Dual Pixel autofocus for stills and 1080 video, both of which are now available with eye detection, although to be fair I had no complaints with the normal face detection on the older model. 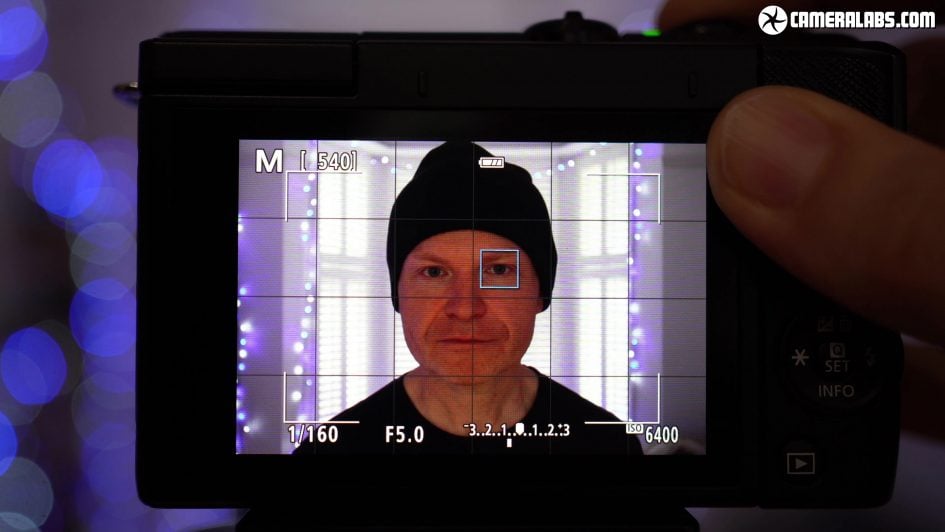 Above: You can see the M200’s face and eye detection in action here, although in this example it struggles to keep me in focus all of the time. You can also see the burst shooting which, with continuous autofocus, fires at around 4fps, although in this situation stalled quite frequently as it tried to keep me in focus. To be fair, in other situations I could maintain 4fps for much longer bursts while focusing, but still this isn’t an action camera. 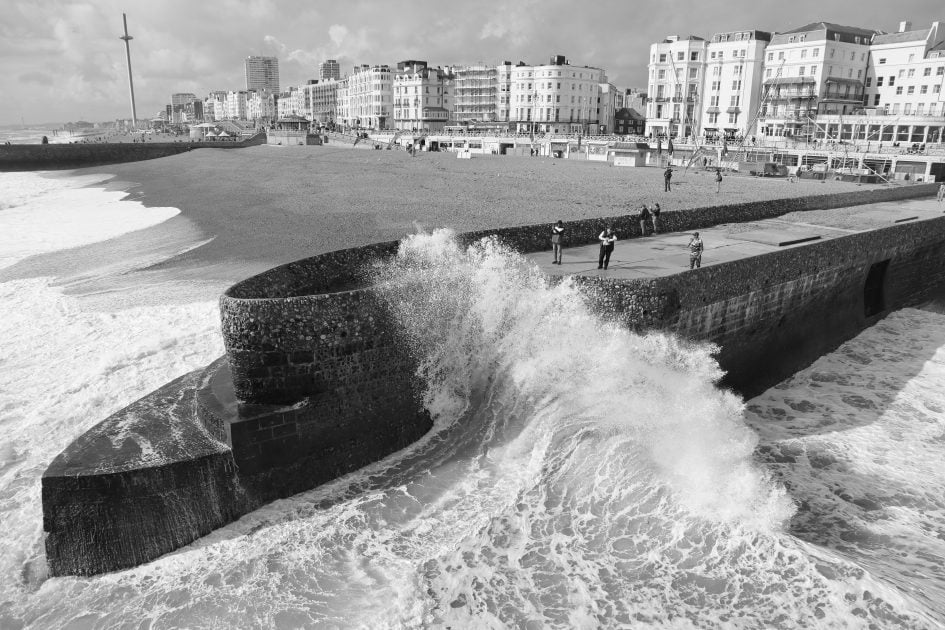 Above: Switch the focus to single and the burst speed increases to 6fps. I used it here to capture the waves crashing around Brighton Pier on a stormy day. The burst speeds are the same as the M100 whether you’re using focus or not. 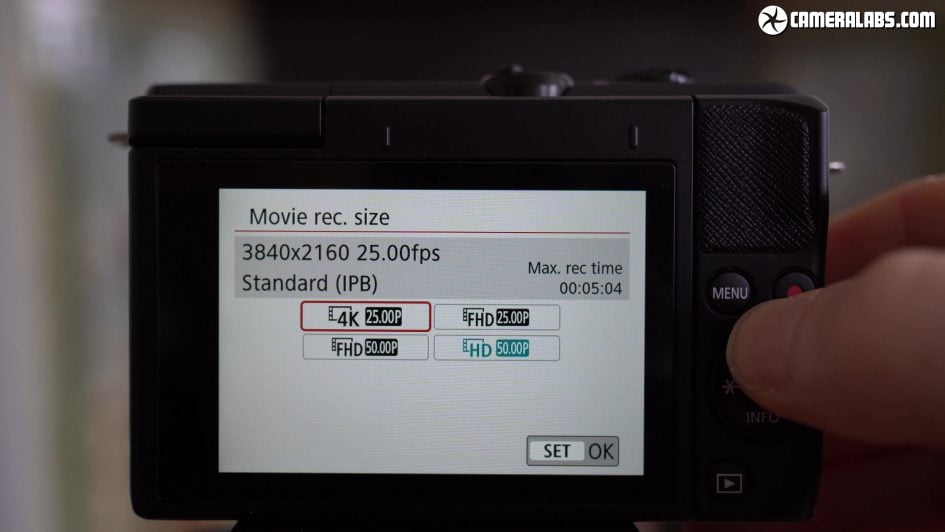 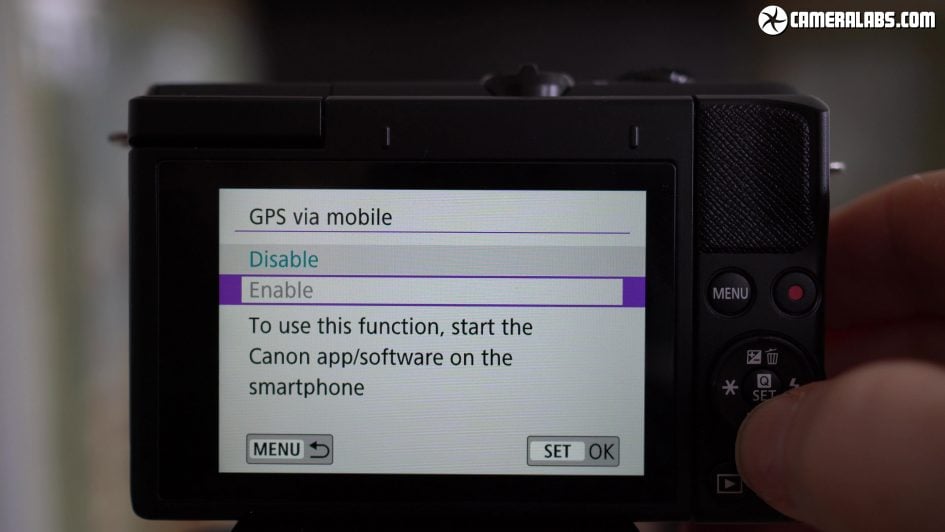 Above: In terms of wireless, the M200 is equipped with excellent Wifi and Bluetooth facilities which provide easy wireless access, control and image transfer. Bluetooth can also be used for basic remote control and location tagging via your phone. But again all of this was possible on the M100. In one new feature update though, the M200 can now remember the orientation of video, so if you’re filming in the vertical portrait shape for Instagram stories or IGTV, it stays in this shape when you copy it onto your phone. 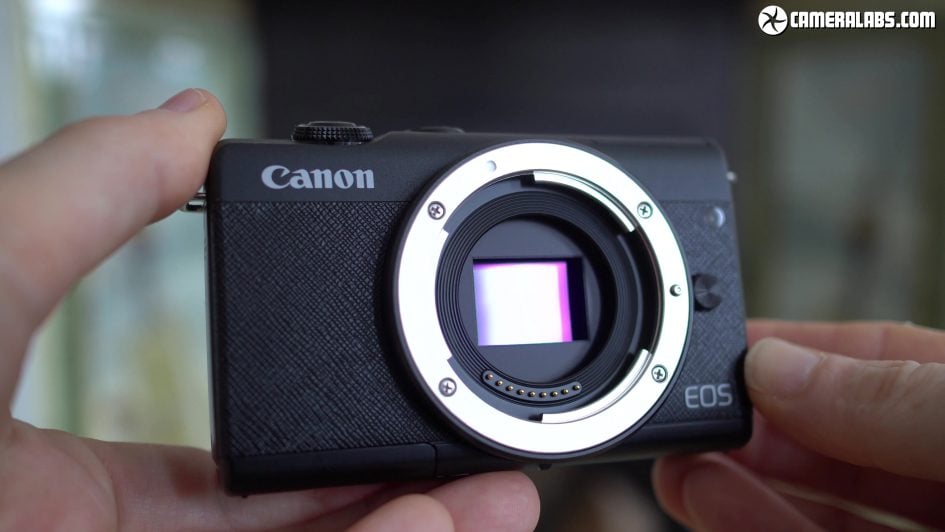 Above: Like the M100 and M50 before it, the M200 employs a 24 Megapixel APSC sensor which captures images with 6000×4000 pixels – that’s enough to make a 20x13in print at 300dpi or have plenty of latitude for cropping. While many phones approach or even exceed this resolution, the considerably larger APSC sensor here allows it to deliver much cleaner images in low light as well as hold onto tonal detail in bright or dark areas. Like all of Canon’s mirrorless cameras to date though, there’s no built-in stabilisation, so to iron-out any wobbles you’ll need a lens with optical stabilisation, or IS in Canon’s range. 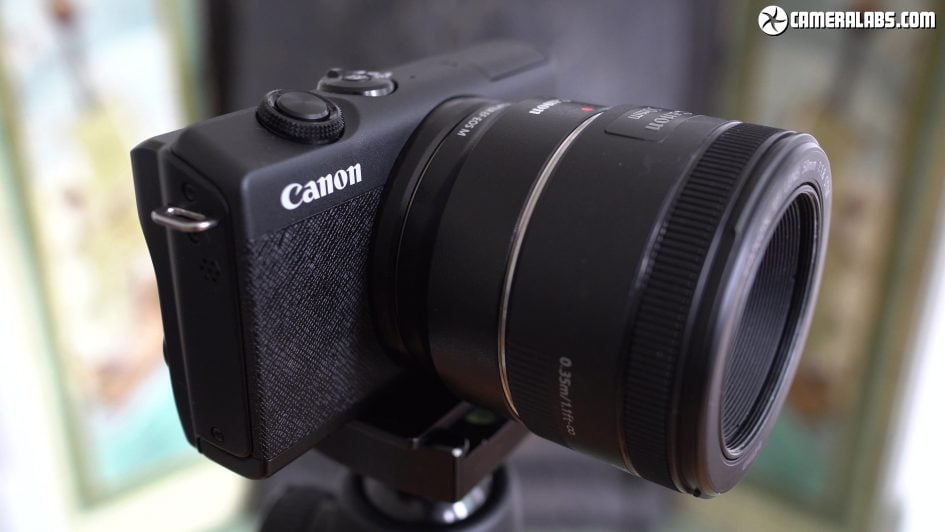 Above: One of the key benefits of the M200 over a phone is being able to fit different lenses and along with a handful of native EF-M lenses, the M200 can accommodate any EF or EF-S DSLR lens via the optional EF to EF-M adapter which costs about $150. For your second lens how about the EF 50mm f1.8 STM for about $125, which gathers over three times more light than the 15-45mm zoom at the long-end, not only making it much better in dim conditions, but also allowing greater chance of blurring in the background.

Check prices on the Canon EOS M200 at Amazon, B&H, Adorama, or Wex. Alternatively get yourself a copy of my In Camera book or treat me to a coffee! Thanks!
Pages: 1 2 3 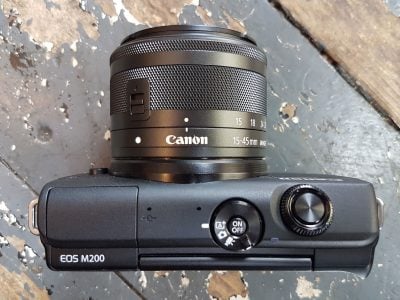 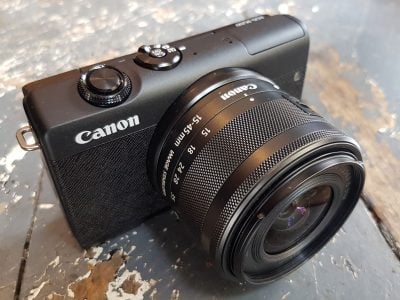 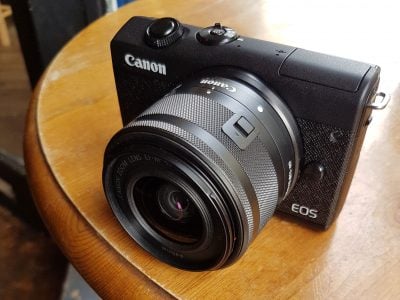