The Canon EF-M 32mm f1.4 STM is a standard prime lens for the EOS M mirrorless system, delivering 51mm equivalent coverage coupled with a fast focal ratio that’s ideal for shallow depth-of-field effects. This eighth native EF-M lens is only the third prime in the system so far and has the brightest aperture of them all - suffice it to say it’s a lens the EOS M faithful have been waiting a long time for, and thankfully it doesn’t disappoint. There may be no image stabilisation or weather-sealing, but this compact prime is a great general-purpose lens that’s sharp even at larger apertures, and also ideal for portraits, low light or still-life. It’s also a stop faster than the EF 35mm f2 IS USM, and while it lacks IS, it's smaller, lighter and cheaper especially when an adapter is factored-in. It is in short, a no-brainer for EOS M owners who desire creative control with a native lens. The only major downside is it should have been available seven years earlier at the launch of the EOS M system, but at least it’s here now.

The Canon EF-M 32mm f1.4 STM is a standard prime lens for the EOS M mirrorless system. Announced in September 2018 but not widely until early 2019, it delivers 51mm equivalent coverage when mounted on one of Canon’s EOS M bodies. This so-called standard field-of-view is ideal for general-purpose use, and thanks to the fast f1.4 focal ratio and reasonably close focusing distance, it can also deliver shallow depth-of-field effects making it a great choice for portraits or still-life.

The 32mm f1.4 STM becomes the eighth native EF-M lens, and only the third prime / fixed focal length model in the system to date; it’s also the fastest. While it’s possible to adapt one of Canon’s many EF lenses to EOS M bodies, such as the EF 35mm f2 IS USM, the native EF-M version is a stop faster, not to mention a little smaller, lighter and cheaper, especially when you factor-in the EF adapter (albeit missing out on IS).

Weighing 235g, measuring 57mm in length and sharing the standard EF-M barrel diameter of 60.9mm, it’s a compact lens with a 43mm filter thread, metal mount and an STM focusing motor that’s smooth and quiet for video work. The optical construction consists of 14 elements in eight groups, employs seven aperture blades and has a closest focusing distance of 23cm. While it’s not weather-proofed, there’s no optical stabilisation and it’s not exactly a budget lens, it remains a model the EOS M faithful have been waiting a long time for. In my video below, I’ll demonstrate all the features and compare the quality with the EF-M 15-45mm kit zoom. If you fancy perusing my sample images or quality results in more detail, check out the respective tabs in this review and when you’re ready, head over to the final verdict! 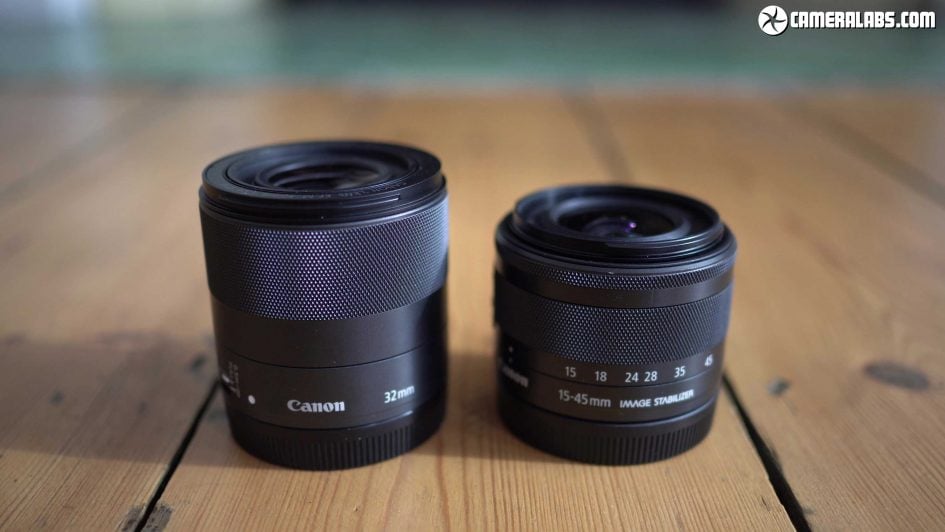 Above: If you’re considering the 32mm f1.4, chances are you already own one of the native kit zooms, like the EF-M 15-45mm on the right. So since the zoom already includes the 32mm focal length, what exactly are the benefits of each lens? 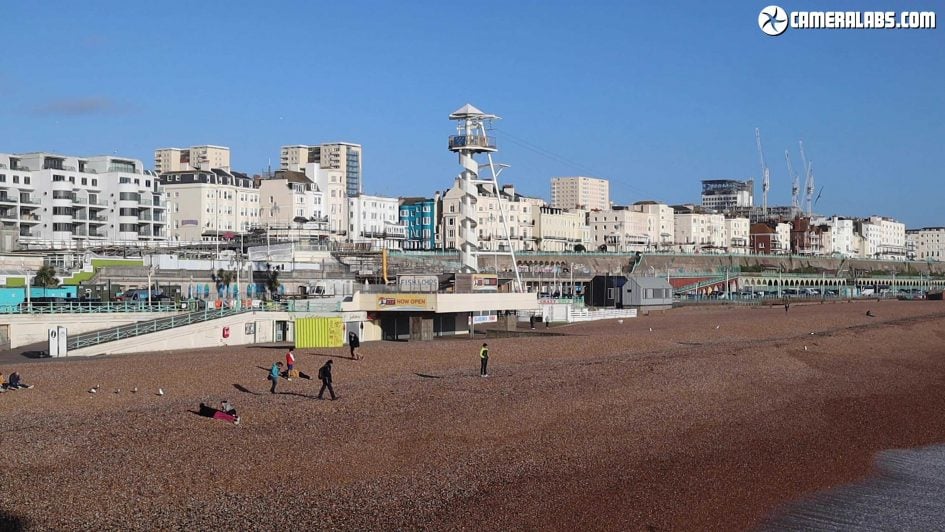 Above: First of all let’s look at the coverage at 32mm, which as you know becomes equivalent to around 50mm for a so-called standard field-of-view. 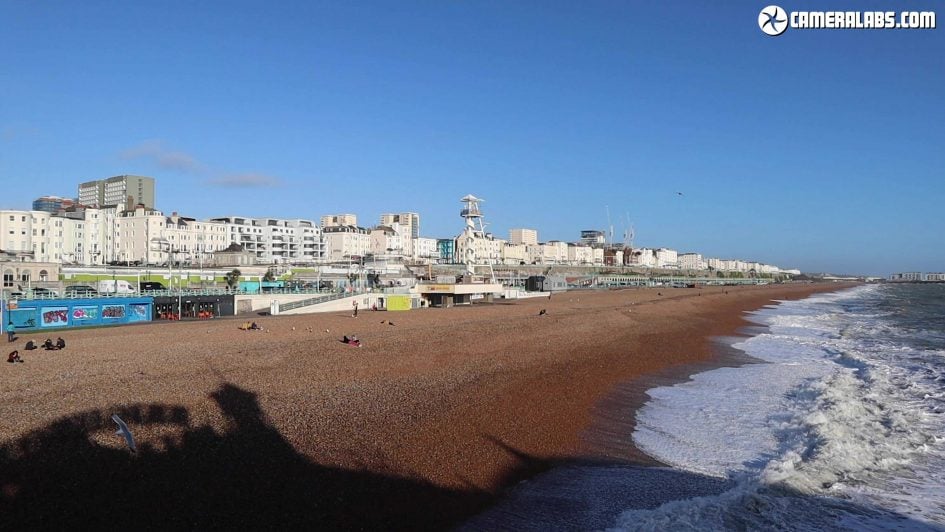 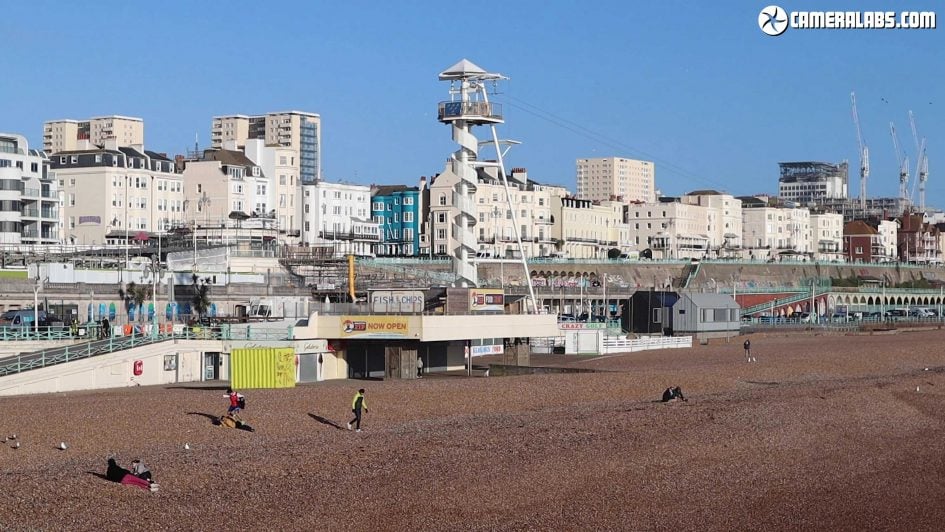 Above: Here it is at 72mm. So for general-use, the zoom will be preferable to many owners. 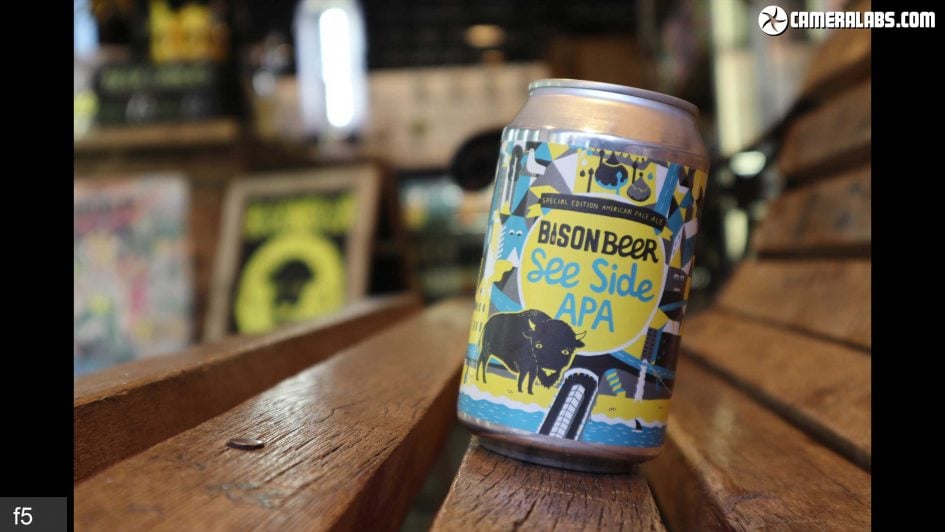 Above: Beyond focal length, the major difference between them is their maximum aperture, which in turn has a big impact on the quality in low light and the potential for a shallow depth-of-field. I took this shot with the 15-45mm at 32mm where its maximum aperture becomes around f5. 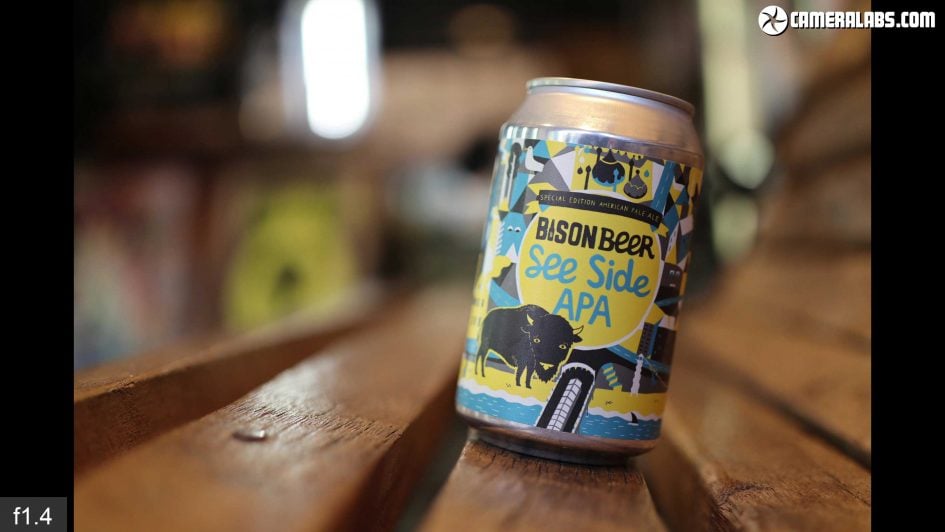 Above: Now here’s the same composition with the 32mm prime at f1.4 and the difference in the depth-of-field is obvious. At f1.4, the 32mm is also letting in almost four stops more light which in turn allows much lower ISOs or faster shutter speeds, making it ideal for low light work. Indeed the 32mm has the fastest or brightest aperture of all the native EF-M lenses. 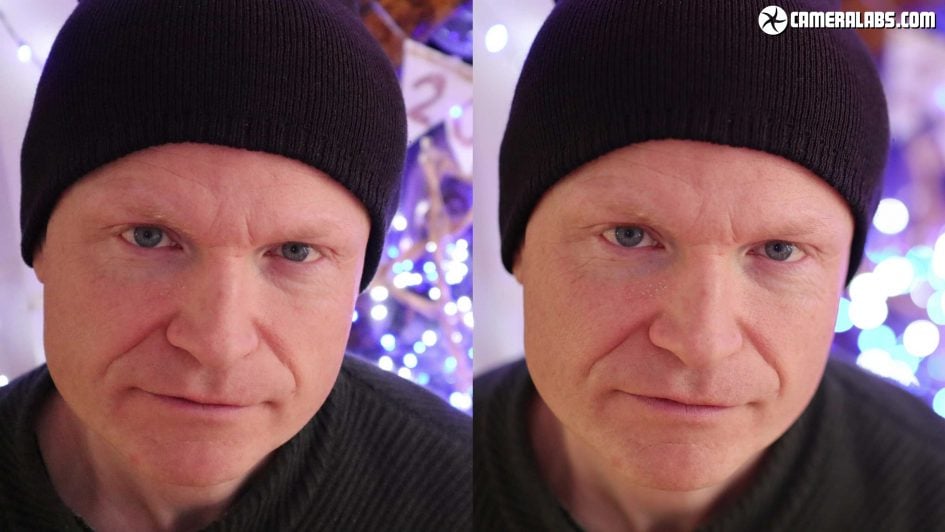 Above: Here’s a portrait example, on the left with the 15-45mm at 32mm f5 – its maximum aperture at this focal length, and now the same composition on the right, with the 32mm prime wide-open at f1.4, and again you can see the difference in the depth-of-field. If you like those nice blurred backgrounds, a lens with a large aperture – indicated by small f-number – is the way forward. Oh and to illustrate the low-light benefits of a brighter lens, in order to maintain a shutter speed of a 50th of a second in these two portrait shots, the 32mm at f1.4 used a sensitivity of 640 ISO, while the zoom at f5 was forced to use 6400 ISO – that’s a big difference in quality 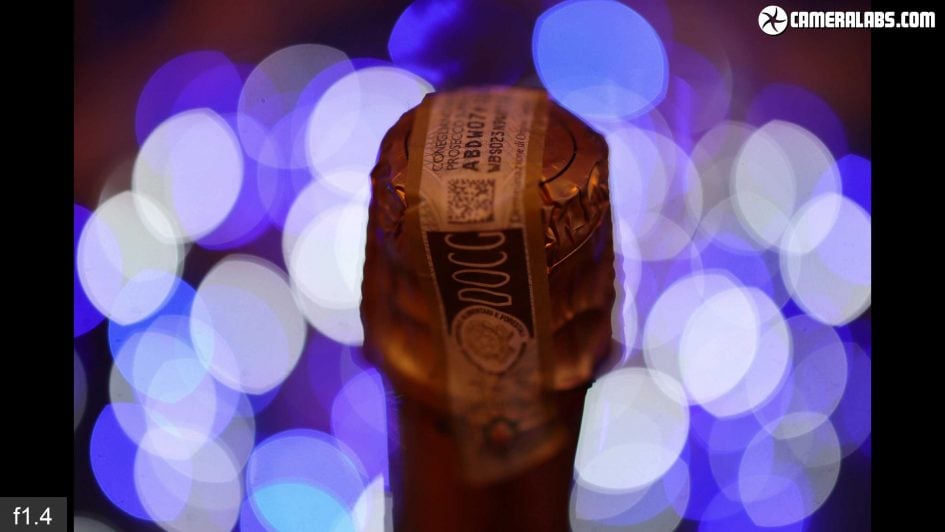 Above: Now for a closer look at the rendering of blurred areas, this time with the subject at the closest focusing distance to maximise the effect. Here’s the lens wide-open at f1.4 where the bokeh blobs are large and free of distracting onion rings. There’s also minimal outlining, although more obviously the blobs towards the edges are rendered as oval cats-eye shapes which you may or may not like. This is fairly normal for large aperture lenses and can be mitigated by closing the aperture down a little. 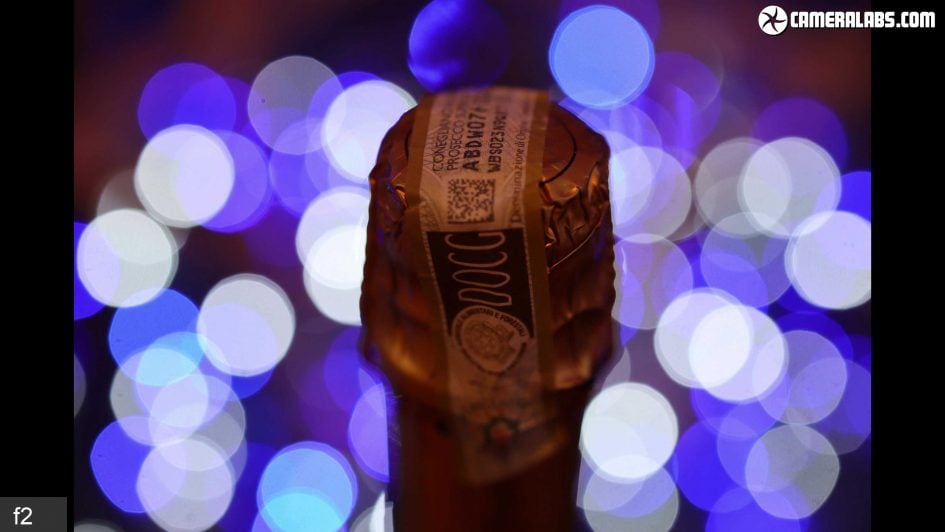 Here at f2, the ovals have become much more circular, although their outline is now influenced by the seven blade diaphragm system, rendering them into heptagons. 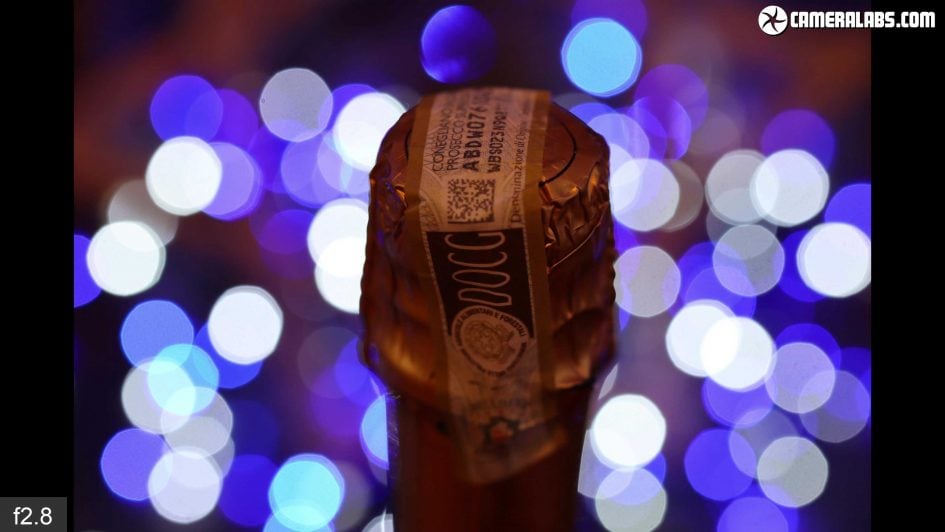 Above: This becomes more evident as you close the aperture, first to f2.8. 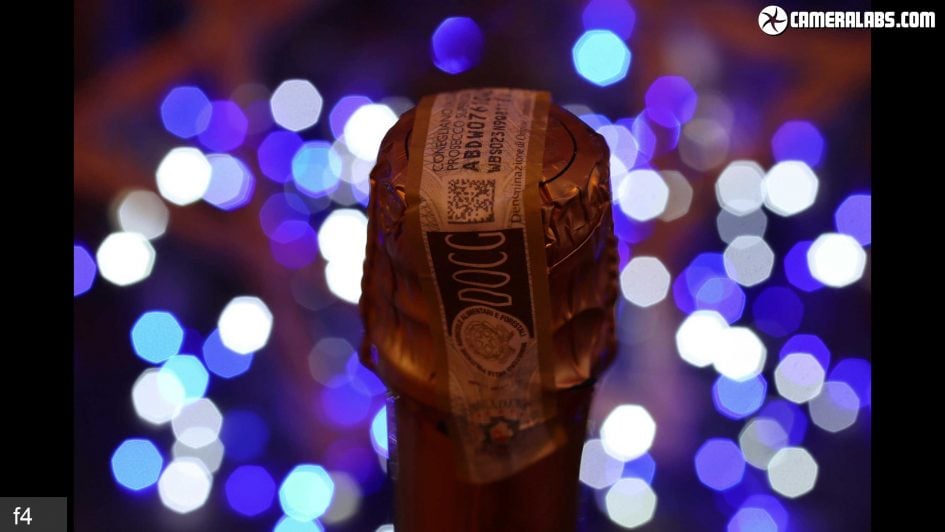 Above: And one stop smaller to f4 as seen here. As the aperture is closed further to its minimum value of f16, the blobs of course become smaller still, but I’d say the results between f1.4 and f2.8 can look very good, although again as the diaphragm blades begin to close beyond the maximum aperture, their heptagon shape becomes quite clear and you may not like that effect. 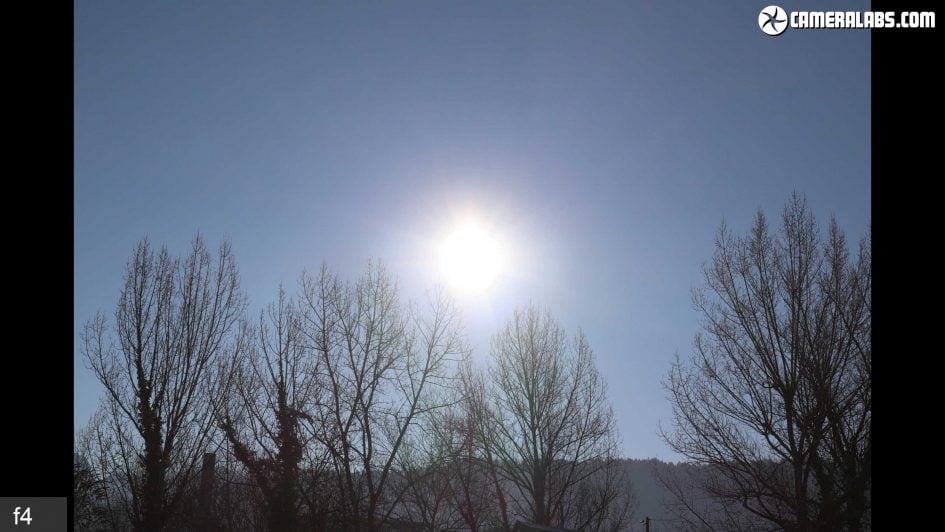 Above: Next a quick look at diffraction on bright sources of light. Here’s the lens pointing at the Sun at f4 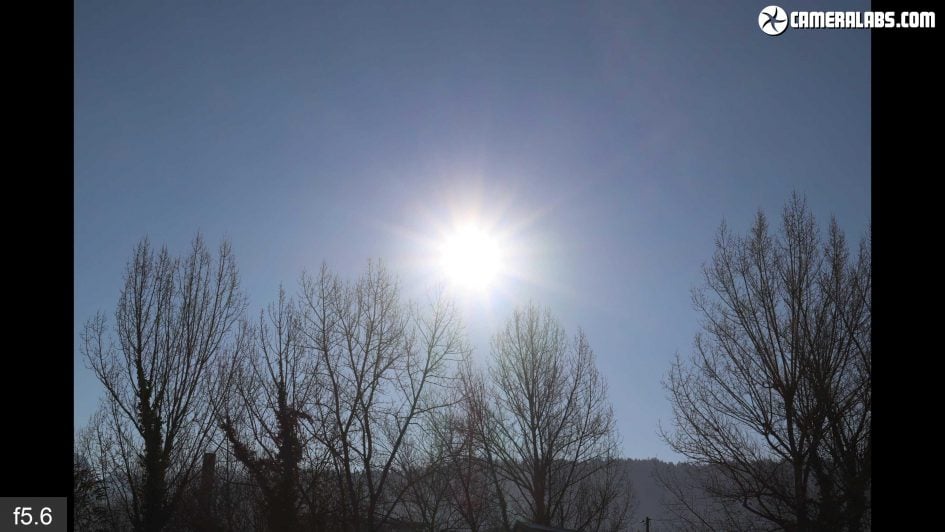 Above: And now at f5.6 where the hints of some spikes are emerging. 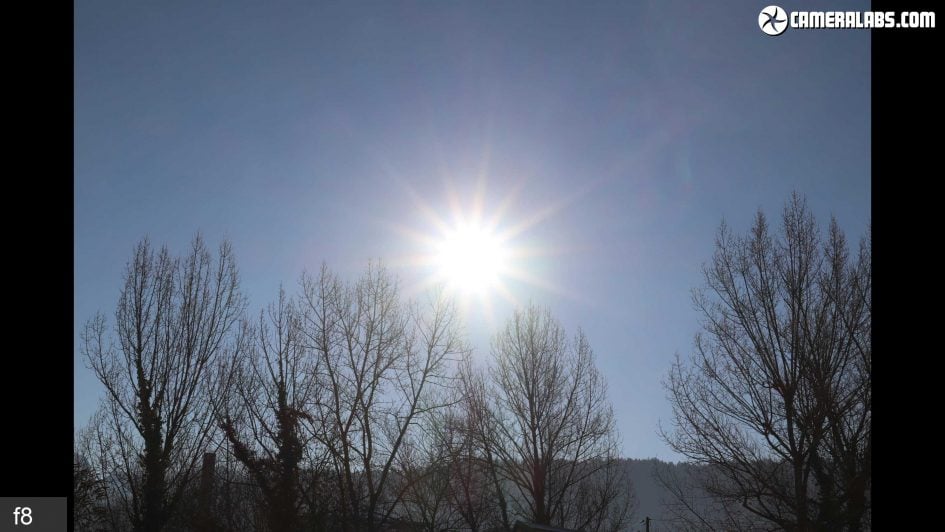 Above: At f8 they become better-defined, with the 14 spikes revealing the seven blade system inside. 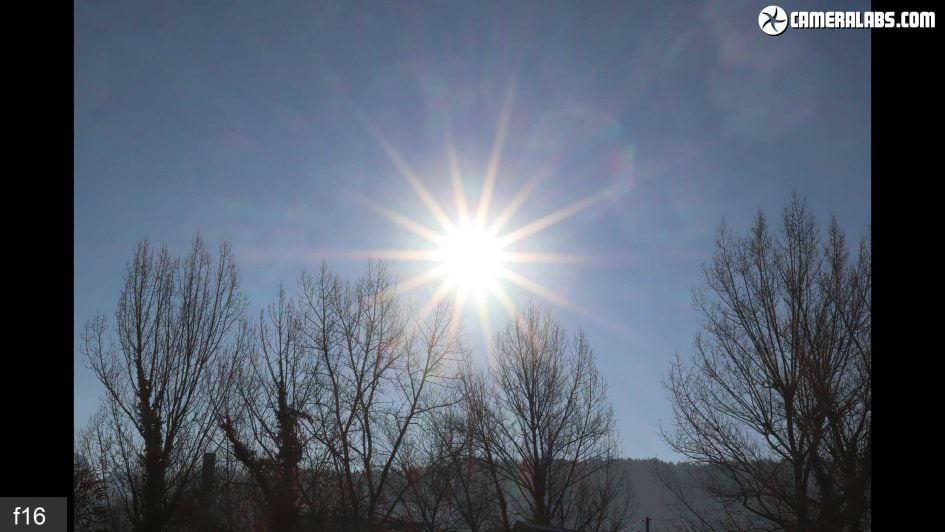 Above: The best results for spikes are of course at the smallest apertures of f11 and now f16, although choosing these will also reveal any marks on the lens or sensor. 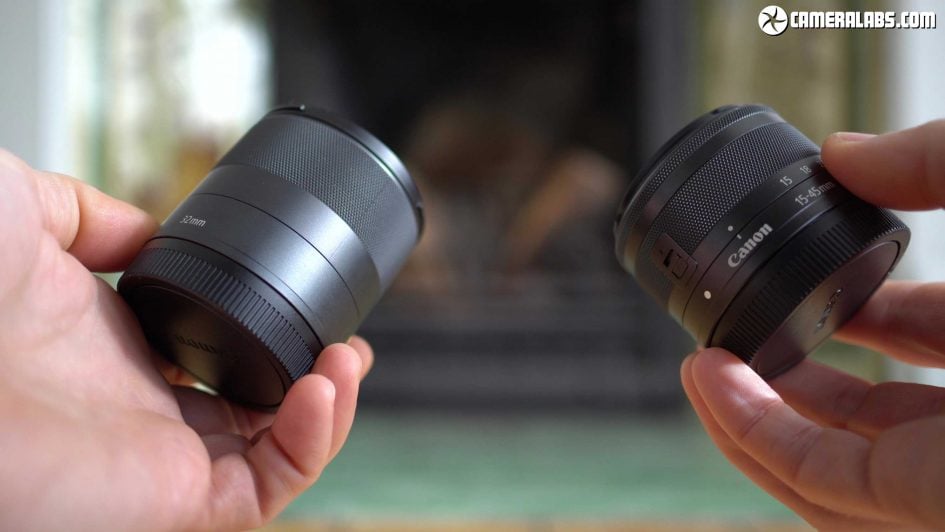 Above: Moving on, how about the build quality of both lenses? They look fairly similar from the outside, both sharing the same 61mm diameter of all EF-M lenses, but in your hands the 32mm feels more substantial. Both are very light, but the zoom is almost half the weight and inevitably feels more plasticky. You will however notice a label on the zoom indicating it has image stabilisation, a feature sadly lacking on the 32mm. The zoom also has a collapsing design, allowing it to retract to a shorter length when not in use. 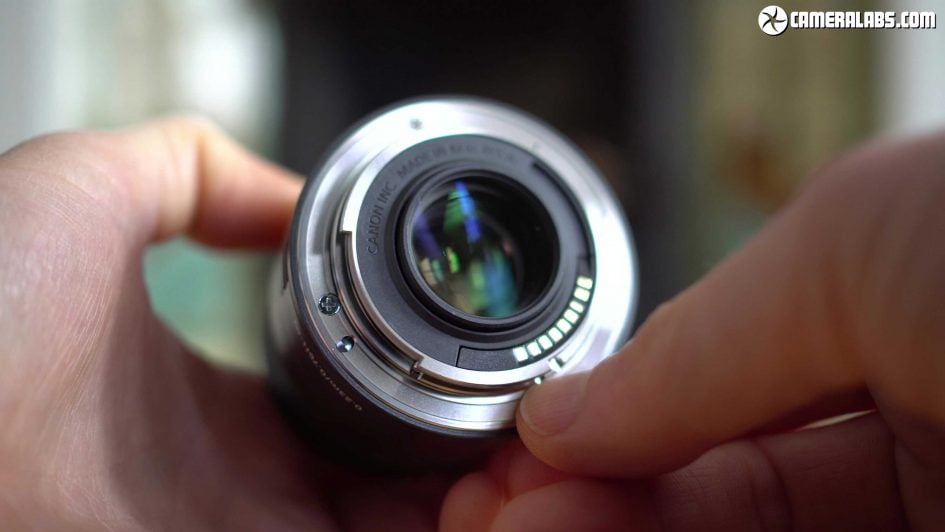 Above: Taking a closer look at the 32mm’s specs, it measures 61mm in diameter, 57mm long, weighs 235g, has a 43mm filter thread and sports a metal lens mount, unlike the plastic mount of the 15-45mm kit zoom, although none of the EF-M lenses to date go as far as having weather sealing. The optical construction consists of 14 elements in eight groups, 7 diaphragm blades and a closest focusing distance of 23cm, similar to the 25cm of the 15-45mm zoom. As I mentioned earlier, there’s no optical stabilisation and at the time I made this video, no EOS M bodies with sensor-stabilisation either, so you’ll need to use quick enough shutter speeds to avoid shake. 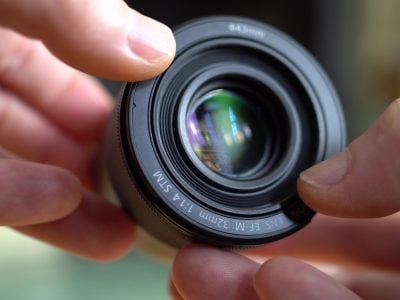 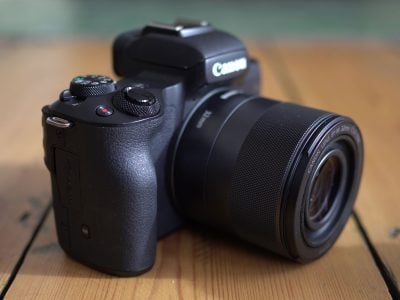 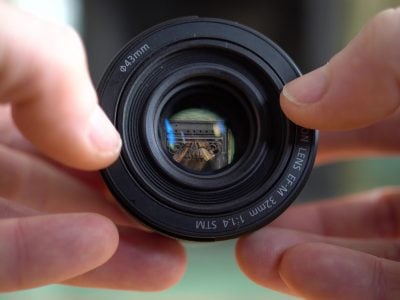