Sony’s Alpha A7 Mark II is the fourth of the company’s full-frame mirrorless cameras, but the first where the concept really comes together. The initial A7 and A7r introduced the idea of full-frame mirrorless with clean high ISO performance, potential for very shallow depth of field effects and the possibility of adapting lenses from any system without a crop factor. Then the A7s came along with a compelling sensor for low light work and high-performance movies. But all three suffered from first-generation AF and ergonomics, confirming Sony’s expertise in electronics over photography. This in particular frustrated those who’d migrated from Canon or Nikon, loving the new features, but often disliking the experience.

The A7 Mark II represents Sony’s first real chance to address some of those frustrations, and while the headline feature is of course the built-in stabilisation, it’s the combination of enhancements which has really improved the overall experience. The deeper grip, repositioned shutter release and greater use of magnesium alloy have made a massive difference to how the camera feels in your hands. The AF hardware may be unchanged, but improved algorithms deliver genuine benefits in AF speed and continuous tracking performance. Previously I struggled to keep walkers in focus. Now I could track slow vehicles. It’s still no sports camera by any means, but it represents a big improvement in response and usability.

Then there’s the stabilisation, which may not have been as effective as the Olympus system in my tests, but which still delivered measurable benefits and importantly transformed the overall handling experience. When shooting with unstabilised or adapted primes on the earlier models, I often found it hard to hold the camera sufficiently steady to manually focus in the magnified view. With the A7 Mark II, this is no longer a problem, with the view floating steadily, allowing you to concentrate on focusing and composition. In short, the camera itself gets out of the way more than its predecessors, and lets you get on with the picture taking. It’s testament to how well it now works that my favourite lens while testing ended up being the manual focus Zeiss Loxia 2/50, a model I’d have struggled with before.

It’s not all good news though. As I mentioned above, the body-based stabilisation proved less effective than the Olympus system in my tests. The most effective combinations, as expected, were native FE lenses where I managed up to four stops of compensation. Meanwhile the stabilisation proved less effective on adapted lenses (I believe due to only using three out of the five axes), delivering two to three stops compensation in my tests at best.

These figures sound reasonable, but in my tests represented a best-case scenario rather than an average or consistent result. I frequently found times when I’d only enjoy two stops of compensation with FE lenses and even just one stop with adapted lenses. Generally speaking the result at one stop difference looked perfect, but as the shutter speeds grew slower, more shake became visible. Certainly the stabilised versions always looked better than the non-stabilised ones, but few were pin-sharp beyond a stop or two. This greatly contrasts my experience with the Olympus system where I consistently enjoy four stops of compensation with pin-sharp results.

Now to be fair, the Sony system has to shift a sensor four times larger, which also allows it to shoot more cleanly at much higher ISOs – itself a great stabiliser of course – but I wanted to point out the differences in the physical systems.

While it’s disappointing not to achieve Olympus levels of stabilisation on the larger format of the Sony though, do not underestimate how useful it still is in practice. As mentioned above, the stabilisation was sufficiently good to keep magnified focus-assist views steady which literally transformed how confidently I could shoot with the system, not to mention how much more enjoyable the process became. What was often a very frustrating job for me on the earlier Alpha A7 models became transparent on the Mark II.

I should also add that it greatly enhanced movie shooting. Previously it was a waste of time for me to film handheld with unstabilised lenses on the older models due to terrible camera shake. Now on the A7 Mark II, the stabilisation makes those clips much smoother. Again not perfectly smooth, but considerably better. Here’s a couple of clips to demonstrate what I mean with the FE 55mm f1.8 prime which has gone from a lens I couldn’t manually focus or film with easily to one that’s a breeze for both.

The improved ergonomics have made a big difference to handling, and the four custom buttons are very welcome. But the new finger and thumb dials were too small for me and felt unsatisfying to turn. I’d frequently turn them by two or even three notches by mistake when only intending one click. If it were up to me, I’d have Sony’s engineers study the controls of Canon and Nikon’s higher-end DSLRs, along with those on the Olympus OMD EM1. And while they’re at it, check out Fujifilm’s viewfinder on the XT1.

Sony also needs to have a look at the scaling for its video. It’s no good adding flat profiles, higher bit rates and built-in stabilisation when poor choices in scaling results in such bad moire. If you’re filming shallow depth of field shots of, say, people’s faces, you may not notice. But film a wide shot of a city skyline full of tiles, grills and fencing and you will see the A7 Mark II’s footage light-up with undesirable artefacts. Such a wasted opportunity.

The AF system may be improved over its predecessor, but I believe only the software has changed (which begs the question if the same improvements could be applied to the A7 with a firmware update). I’d have much preferred to see Sony wait to deliver an A6000 / A5100 experience to full-frame where phase-detect AF points are spread across the entire frame and the system can genuinely track fast action anywhere in the composition. Instead it’s another incremental update making me wonder if a sports-optimised model is waiting in the wings.

And finally there’s the battery life: it’s just too short if you’re exploiting all the technologies. At best Sony reckons you could get just over 300 shots per charge, but enable stabilisation, film a few video clips and use Wifi to copy a handful of images and you could see the battery run dry after less than 100 shots. Use the camera heavily and you will run out of power before the day is even halfway through. Luckily you can recharge the battery in-camera over USB, and I managed to get out of several tricky situations thanks to my Anker Astro Mini portable battery. But whether you use one of these or carry a spare or two, you will need to address the drain. The A7 Mark II is one hungry camera.

But even with these caveats, the Mark II represents a significant improvement over its predecessor. The bigger grip, improved AF and stabilisation transform the overall handling, usability and sheer enjoyment of using the camera. Previously I felt many aspects of the A7 / A7r / A7s were getting in the way or under-performing, but now it feels so much better.

Of course this also begs the question whether we’ll see stabilised versions of the A7s or A7r, or at least stabilised versions of bodies with sensors optimised for video or high resolution stills. Judging by Sony’s track record this would seem extremely likely – after all this is a company that’s not exactly shy at releasing new bodies, and sharing tech between them. But there may be technical limitations. Delivering 4k video for example generates a lot of heat, and it may not be possible to have this and a stabilised sensor, although this is pure speculation on my part. I would however be surprised if built-in stabilisation isn’t extended to other models in the series, and I’d also be surprised if we don’t see at least one of these later in 2015.

So with this in mind, should you go for the A7 Mark II, or wait for a Mark II version of a different model in the range? It of course depends on what it is you want. If you’re into video, I’d definitely wait for an A7s Mark II or even just go for the original A7s, as the A7 Mark II has serious problems with moire. After this it becomes a question of how much resolution you need, and whether Sony will stabilise a future version of the A7r or perhaps just deploy higher pixel counts for this model. We can only speculate at this point, but the rumour mills are suggesting a 50 Megapixel sensor is on its way.

I can tell you this though: when the choice was between the A7 and the A7r, I’d have gone for the latter as the former failed to deliver significant benefits in handling. But now with the improved grip, better AF and stabilised sensor, the A7 Mark II has become a much more usable camera, and one I much preferred using to either the A7 or A7r, even with the latter’s extra resolution. Indeed since I’m not a pro video shooter the A7 Mark II has become my favourite in the full-frame Alpha mirrorless series and a model I can easily recommend even with the caveats mentioned above.

I can’t however imagine this will be the only full-frame mirrorless camera from Sony this year, so once again if video or ultra high resolution stills are your priorities, I’d either wait for a new model or snap up one of the originals. It’s also worth mentioning the original A7, which despite being first generation, currently represents great value if you simply want the most affordable entry to full-frame mirrorless photography. 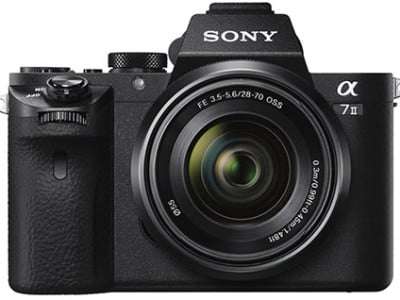