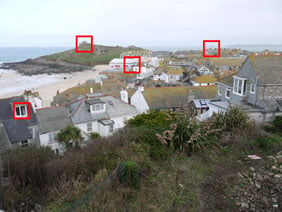 The Lumix GF2 was set to RAW to avoid in-camera JPEG corrections; all files were processed in Adobe Camera RAW with lens corrections disabled and the default sharpness settings. Magnified assistance in Live View was used to confirm the focusing.

The image above was taken with the Panasonic Lumix G 14mm f2.5 lens mounted on a Lumix GF2 body at a sensitivity of 100 ISO. The crops are taken from the areas marked with the red squares for presentation here at 100%.

Starting with the crops from the centre of the image, the Lumix G 14mm delivers pretty good results across its aperture range. Wide open at f2.5, there’s a little softness, but the quality in the middle remains respectable and crisps-up nicely at f2.8 and smaller.

The corners however tell a different story. With the aperture wide-open at f2.5, there’s quite apparent darkening in the corners due to vignetting; this is effectively reduced by in-camera processing, but we’ve shown the uncorrected RAW conversion here to reveal the performance, warts and all. There’s also some softness to the crop.

There’s a noticeable improvement in sharpness and light fall-off when closed even a fraction to f2.8, but it’s still suffering from softness in the corners. The quality improves at f4, again with a boost in sharpness and reduction in vignetting, but this is about as good as it gets. Closing the aperture beyond f4 doesn’t make a significant difference to the sharpness in the corners, and beyond f8 will begin to see the image suffering from diffraction.

It’s a little disappointing not to find an aperture value where the Lumix G 14mm really shines in the corners. As a prime lens, you may have been expecting superior quality, but from this page, it would seem the Lumix G 14mm is more about achieving very compact dimensions and low weight.

So is the quality better or worse than the kit zoom? Find out in our Lumix G 14mm vs 14-42mm results page.

The Lumix GF2 was set to RAW to avoid in-camera JPEG corrections; all files were processed in Adobe Camera RAW with lens corrections disabled and the default sharpness settings.

The image above was taken with the Panasonic Lumix G 14mm f2.5 lens mounted on a Lumix GF2 body at a sensitivity of 100 ISO. The crops are taken from the areas marked with the red squares for presentation here at 100%.

On the previous page we saw how the Lumix G 14mm performed in the centre and corners at various apertures. On this page we’ll see how it compares against the 14-42mm kit zoom, when the latter is set to 14mm.

Starting with the corner crops first, the Lumix G 14mm kicks-off the sequence at f2.5 where it delivers an image which is relatively dark and soft in the corners. On the second row of crops we’ve stopped the 14mm down slightly to f2.8 and shown it alongside the kit zoom at its widest aperture of f3.5. Here there’s very little between them in quality with similar degrees of corner softening and darkness.

With both lenses set to f4, the 14mm prime enjoys a small benefit in sharpness in the corners compared to the 14-42mm kit zoom, but you’ll have to pixel-peep to really see it. Interestingly at f5.6, the situation swaps, with a minor sharpness advantage to the kit zoom, but again it’s fairly subtle.

The 14-42mm kit zoom remains slightly ahead of the 14mm prime at f8 in terms of corner sharpness, giving it an overall lead, although again not by a huge margin.

Moving onto the centre crops (lower on the page) there’s effectively no difference between the two lenses in terms of sharpness and contrast – both essentially deliver the same quality in the middle of the frame throughout their aperture ranges.

Looking at these results you may be a little disappointed by the new 14mm prime, as many expect fixed focal length lenses to always out-perform zooms, especially kit zooms. But here you can see both the Lumix G 14mm and 14-42mm delivering very similar results, and in some cases, the latter actually slightly out-performing it. There’s also not much benefit in terms of maximum aperture either, with the f2.5 only offering one extra stop over the f3.5 of the zoom at 14mm – and remember in terms of using slow shutter speeds, the zoom enjoys three stops of optical stabilisation compared to none at all on the prime.

So with similar optical quality, no stabilisation and just one stop advantage in light-gathering power, the only real benefit the Lumix G 14mm has over the kit zoom is size and weight. But measuring just 20.5mm thick and weighing only 55g, it really is a tiny lens. Mount it on the already compact GF2 and you’ve got yourself the smallest compact with a large sensor and built-in flash.

So don’t buy the Lumix G 14mm hoping for better quality than the kit lens, or you’ll end up disappointed. This prime is all about minimising size and weight while maintaining the quality of the already respectable kit zoom. As such it comes recommended to any Micro Four Thirds owner who desires the smallest possible lens for portability, and understands it won’t be out-performing the kit zoom on quality. You can’t have everything, and the job of the Lumix G 14mm is to make the GF2 look and feel like the smallest operational EVIL camera on the shelves – and they certainly make a very portable combination.

To compare noise levels under real-life conditions we shot this scene with the Panasonic Lumix GF2, Olympus E-PL2, and the Sony NEX-3 within a few moments of each other using their best quality JPEG settings at each of their ISO sensitivity settings.

The above shot was taken with the the Panasonic Lumix GF2 in Aperture Priority mode with the 14-42mm kit lens at its widest angle setting of 14mm (28mm equivalent). The ISO sensitivity was set to 100 ISO and the exposure was 0.8th of a second at f4.5. The crops are taken from the area marked with the red square and presented below at 100%.

The Lumix GF2’s CMOS sensor starts out with reasonably good results at the 100 and 200 ISO sensitivities. But even at these low ISO settings there is evidence of noise as well as behind the scenes efforts to supress it. There’s good detail in the stone column, but the wood panelling and the organ pipes above have a slight granular look about them. There’s also a clear difference between the 100 and 200 ISO crops with the higher sensitivtity looking a little clumpier, so we’d recommend GF2 owners to manually set the sensitivity to 100 and stick with it whenever possible.

The step up to 400 ISO is, in quality terms a small one. Often 400 ISO is where noise really starts to become intrusive, but the GF2’s 400 ISO setting is almost as good as its 200 ISO, it’s at 800 where the big hit arrives with noise, and processing taking quite a toll on image detail. Despite the grittiness and smearing, though, for smaller prints and screen display 800 ISO is still quite usable. from 1600 to 6400 ISO the noise really does have the upper hand, but the progression is fairly linear with each step getting worse by similar degrees.

Like the E-PL2, the results from the Sony NEX-3 at the lower ISO settings are very good indeed, showing no evidence of noise or processing and very clean image detail. But the NEX-3’s large sensor advantage means it can continue to produce superior results right the way up the ISO range. In the middle of the sensitivity range from 400 to 1600 ISO the NEX-3 crops are looking markedly superior to those from the GF2, in fact we’d go so far as to say they are at least a stop better, with the NEX-3 1600 ISO crop looking at least as good as the 800 ISO crop from the GF2

If excellent low light performance is high on your list of priorities, it’s also worth bearing in mind the the NEX3/5 benefits from two composite modes – Hand-held twilight and Anti-motion blur – designed specifically for producing low-noise reults in low-light situations.

Now check out how the new 14mm pancake prime lens performs, or head over to our Panasonic Lumix GF2 gallery to see some more real-life shots in a variety of conditions.