Check prices on the Nikon 24-70mm f2.8 G at Amazon, B&H, Adorama, or Wex. Alternatively get yourself a copy of my In Camera book or treat me to a coffee! Thanks!

The AF-S Nikkor 24-70mm f/2.8G ED is Nikon’s professional f2.8 standard zoom. It covers a 2.9x zoom-range and was announced August 2007. It’s the successor to the AF-S Nikkor 28-70mm f/2.8D ED and like its predecessor compatible with full-frame DSLRs. Its gold-ring, constant f2.8 aperture, and a price-tag of around 1500 EUR put it clearly in an upmarket / professional position although it is more affordable than the equivalent lenses from Canon or Sony.

While primarily designed as a general purpose bright zoom for full-frame models, you could equally use the Nikon 24-70/2.8G on a DX-body where it gives you an equivalent 36-105mm coverage plus future-proofing should you upgrade to an FX-body at a later date. Complement this lens with a DX 10-24mm wide-angle zoom and you can seamlessly cover a 7x zoom-range from ultra-wide-angle to short tele with only two lenses. 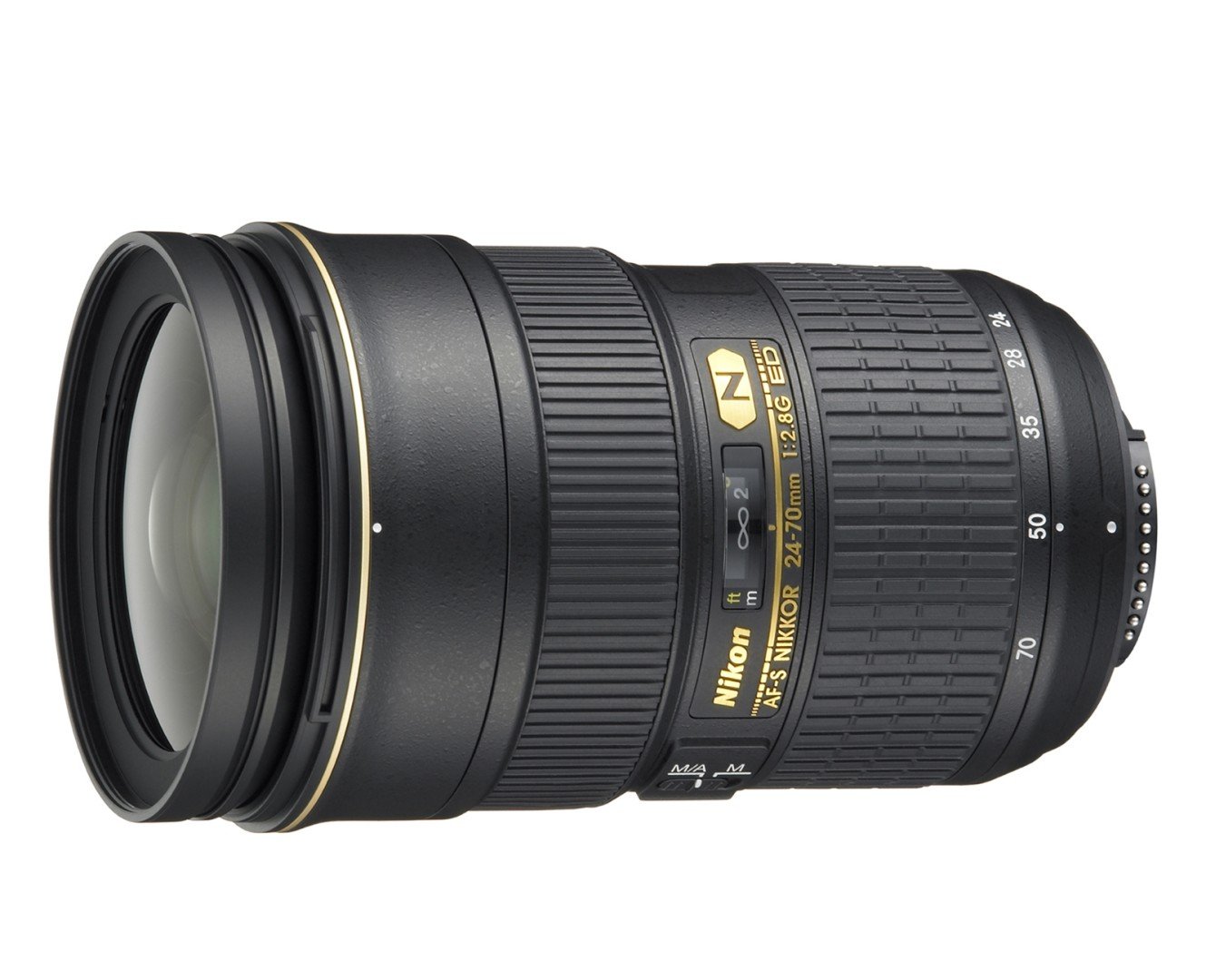 Optics: 15 elements in 11 groups. That’s pretty low in comparison but still: 11 groups have 22 air/glass-surfaces that produce a lot of opportunities for flares and ghosts. Nikon has applied their special Nano Crystal Coat on one element – and their so-called super integrated coating on others. We’ll see how this works out in practice. The cross-section shows a lot of special elements: three aspherical and three extra-low dispersion elements. [+]

IS: No = a pity! Tamron’s latest design has image stabilization (called VC) that works, Nikon’s own 16-35/4.0G has VR. Sony’s lenses all get image stabilization through body/sensor-based IS. So this lens will make you go for 4-8x shorter shutter speeds/higher ISOs than with alternatives if you don’t want shake to ruin your shot. And shake you see: Just look through the viewfinder at 70mm! [-]

Comes with a very nice semi-soft lens-case that is well padded, the lens-shade is included, reversible for transport, and has an interlock to prevent accidental loss, and the lens-caps are standard Nikon’s. [+]

The score in the “features-department” is 2[-]/3[0]/8[+]. The minus-points being the steep price and the missing image stabilization. But the price is only high compared to third party alternatives. If you compare the lens to offerings from Sony and Canon you could as well say that the Nikon is relatively cheap.

:
A 2.9x zoom with a focal range of 24-70mm may be your best choice for a full-frame/FX-body when you want to be prepared for many standard situations but want a larger maximum aperture and better image quality than you would expect from kit-zooms. It is arguably the best zoom range and focal ratio for wedding and portrait photographers.

At 24mm shortest focal length it lets you capture a crowd in tighter spaces or shoot architecture. And the 70mm on the long end gives you some reach and working distance for portraits and street-photography although you may find it too short on a FX-body in some situations. It has a one stop larger aperture than kit-zooms which can produce a shallower depth of field and lets you isolate your subject a little more.

– The Tamron SP 24-70mm f/2.8 Di VC USD: At around 1000 EUR it’s not only considerably cheaper but it offers image stabilization too. Plus it offers good overall performance that earned this lens a Recommended rating, as you can read in my Tamron 24-70/2.8 VC review.

– From Sigma there’s the AF 24-70mm f2.8 EX DG HSM. It’s the cheapest alternative at around 750EUR. Non-stabilized and physically shorter than the Nikon with the focus ring in front and the zoom-ring near the camera. Some reports have shown it to have pretty poor border/corner-performance wide open.

With lenses offering an aperture of f2.8 or larger I test for longitudinal CA (loCA, a.k.a. “axial color” or “bokeh CA”). The Nikon 24-70mm f2.8G shows some loCA. There are some magenta coloration on the left and greenish hues on the right to be seen. That is clearly worse than the results from Tamron’s equivalent, but it is still not too obvious in real-life shots. Note: The alternating colorations of the vertical marks on the right are a sign of color-moire only and have nothing to do with loCAs.