The D5500 is Nikon’s latest upper entry-level DSLR and like its predecessors, delivers a decent step-up from budget models without the complication, size and expense of mid-range or semi-pro bodies. Indeed, the D5xxx series has always been a favourite of mine and one which continues to offer a number of features lacking on any other model in the Nikon range.

Most notably, the D5500 remains the only DSLR in the current Nikon lineup with a fully-articulated screen which can flip and twist in any direction. The much higher-end D750 may have a tilting screen, but it can’t twist to face the subject, nor can it angle out for comfortable high or low shooting in the portrait / tall orientation – something I personally find very useful. The D5500 also becomes the only Nikon DSLR with a touch-screen, another feature I love. Not only is it invaluable for quickly repositioning the AF area in Live View or pulling focus in movies, but it’s also surprisingly easy to swipe and tap your way through the menus and settings, not to mention images in playback. Nikon’s also stayed a step ahead of Canon by fitting a larger 3.2in screen, which delivers a noticeably bigger image in Live View or playback than a 3in panel.

At its heart, the 24 Megapixel APSC sensor is capable of delivering highly detailed images with low noise levels up to high sensitivities. The only caveat is you’ll need a decent lens to resolve the full 24 Megapixels worth, and sadly the 18-55mm kit zoom struggles to beat rivals with 16-18 Megapixels. So if you’re buying the D5500 – or indeed any camera – for its high resolution, you’ll need to couple it with good lenses.

The built-in Wifi is fairly basic – the smartphone remote control doesn’t support touch focusing nor any exposure control and the location tagging is rudimental to say the least. Rather than making a log of your route that’s synced with photos later, the Nikon app only offers to tag images as they’re copied onto your phone one at a time, and then only with your current position, rather than where they were actually taken. It’s not ideal, and to add insult to injury it’s worth reminding ourselves the previous Nikon D5300 actually had a GPS receiver built-in, thereby avoiding this messy implementation.

While I lament the loss of the D5300’s GPS receiver though, it is worth noting Nikon giveth as well as taketh away, so two key improvements on the new model include a touch-screen and a sensor which can turn the screen off when you compose with the viewfinder. Both are things we complained about on the D5300, so it’s good to find them here.

Viewed against DSLRs in the same price bracket, the D5500 is pitched as you’d expect. Canon’s rival EOS T6i / 750D costs almost exactly the same, shares (essentially) the same size sensor with the same resolution, features a fully-articulated touch-screen, the same sized viewfinder, same 5fps burst shooting and built-in Wifi. Dig down and you’ll discover the D5500’s screen is a bit larger and it has a built-in interval timer, but the EOS T6i / 750D focuses more confidently and quietly in Live View and movies, and also has NFC for easier Wifi configuration on compatible phones. Canon also offers the slightly more sophisticated EOS T6s / 760D for those who want a slightly bigger step-up from entry-level models. Only you can weigh-up which features are more important, but personally speaking as someone who shoots a lot in Live View, I find the quieter and better continuous AF of the Canon preferable.

But while Canon and Nikon pitch their feature-sets at similar levels, others are happy to subvert their trends. Most notably Sony’s mid-range mirrorless, the Alpha A6000, makes the D5500 and EOS T6i / 750D look quite old fashioned in many respects, and comes in at a cheaper price too. The A6000 shares their 24 Megapixel resolution but shoots more than twice as fast at 11fps and is one of the few mirrorless cameras which can confidently track fast subjects, and almost anywhere on the frame too, not just within the golden diamond of the DSLR viewfinder AF area. It’s also important to note that you can enjoy this performance whether you’re shooting with the viewfinder or screen on the A6000, whereas the Nikon D5500 will only track fast action if you’re composing with the viewfinder.

Speaking of viewfinders, there are pros and cons to shooting with the optical viewfinder of a DSLR and the electronic viewfinder of a mirrorless. For example, the DSLR viewfinder won’t slow down or become noisy in low light, nor will it lag as you pan and shoot while following action. But shoot with the D5500 or EOS T6i / 750D alongside the A6000 and the biggest thing you’ll notice is the actual viewfinder size. The A6000 viewfinder image is huge in comparison and shows the full view too, not to mention the usual array of focusing aids, previews and guides. Switch back to the D5500 or EOS T6i / 750D and their viewfinders look tiny. Sony’s Wifi implementation and smartphone app is also way ahead of Canon and especially Nikon.

There’s also a massive difference in size. The A6000 kit is comfortably shorter, half the depth and two thirds the weight, which makes it more likely to be carried everywhere you go. The grip isn’t bad on it either, although I equally understand those with bigger hands will prefer the larger bodies of the traditional DSLRs to hold onto. It’s also important to note that while the A6000’s viewfinder image is bigger than the D5500 or EOS T6i / 750D, its screen is smaller, only tilts vertically, and it’s not touch-sensitive either. Unusual to find a traditional DSLR beat a modern mirrorless in this regard.

Don’t get me wrong, I enjoyed shooting with the D5500 and find it easy to recommend if you’re looking for a traditional DSLR that’s a good step-up from a budget model. But personally I find the faster shooting, bigger viewfinder, smaller body, better Wifi, quieter focusing and lower price of the Sony A6000 more compelling at this end of the market.Once again it’s a case of weighing-up the features, handling and price, but what I really wanted to illustrate was while Canon and Nikon’s budget and mid-range DSLRs are similarly-specced, there may be alternatives that are more compelling depending on your needs. See my Sony A6000 review for more details. 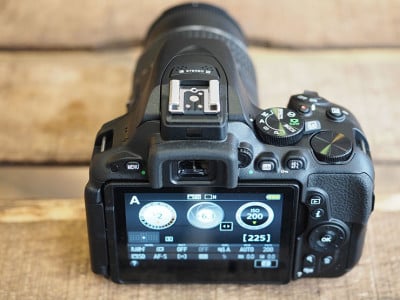 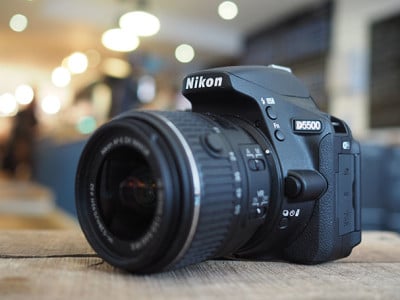