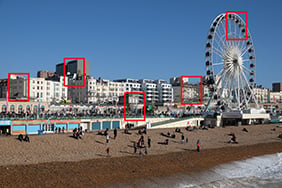 To compare real-life performance I shot this scene with the Fujifilm XT1 and Olympus OMD EM1 within a few moments of each other using their best quality JPEG settings.

Both cameras were set to their lowest base sensitivities of 200 ISO, and all other settings were left on the defaults; this means LMO was enabled on the X-T1. Stabilisation was disabled for this tripod-mounted comparison.

In my first comparison below I chose to use variable aperture kit zooms to illustrate the kind of quality difference you can expect from each system in practice. If you’re interested in the quality from prime lenses, please head straight to my noise results pages.

Unfortunately there aren’t equivalent zooms for both systems in range, aperture or price though, so one system will always come off worse than the other optically in such a comparison. In this case it’s the OMD EM1 which suffers as its 12-50mm kit zoom is around half the price of the Fujifilm 18-55mm and as you’ll see below, this shows as you approach the edges of the frame. I could have gone for the Olympus 12-40mm f2.8, but it’s even more expensive than the Fujifilm 18-55mm and in a different category as a professional grade constant aperture lens. That said the price of the EM1 with the 12-50mm is similar to the X-T1 with the 18-55mm, so I still feel it’s a relevant comparison to make – and once again I have a comparison with primes in my noise results pages.

The crops below start from the center of each image where both lenses should perform at their best. At first glance there’s a very similar degree of real-life detail from both cameras, although look closer at the grills and blinds in the middle and you can see the X-T1 is resolving some finer details.

In the second and third rows again the level of detail is similar but the details are noticeably crisper on the Fujifilm. The image is sharper without suffering from artefacts, while the OMD EM1 fitted with the 12-50mm looks softer in comparison.

The fourth and fifth rows are taken towards the left and right edges of the frame where the Fujifilm 18-55mm lens is clearly out-performing the Olympus 12-50mm. The X-T1 / 18-55mm is delivering much crisper results than the EM1 / 12-50mm at this point, especially in the final crops of the wheel.

Comparisons like these are useful and frustrating in equal measure. Useful as they reveal what you can expect from each system when spending a similar total budget on body and lens, but frustrating as it’s hard to isolate body performance from the lens.

Superficially this page would seem to suggest the winner here is actually the Fujifilm 18-55mm lens which delivers very crisp details across the frame and right into the corners. But this doesn’t tell the whole story. We’re comparing in-camera JPEG images here, where the X-T1 has applied its software Lens Modulation Optimiser, LMO, to correct for diffraction and edge softness on the lens. While the aperture of f5.6 used for this image is not going to suffer from much diffraction on an APS-C system, I can tell you the 18-55mm in my tests with the X-T1 consistently delivered very crisp results across the frame, and some of that is certainly attributable to LMO. Indeed it often delivered crisper results than a third party prime lens which didn’t support LMO.

Bottom line for this page is the X-T1 plus 18-55mm will outperform the EM1 with 12-50mm for sharpness and detail across the frame on JPEGs for much the same total budget. But the first crop does imply the resolution of each system can be similar, so let’s now see what happens when you take their respective RAW files and process them with the same settings in my Fujifilm XT1 RAW quality results. Alternatively check out my Fujifilm XT1 noise results, my Fujifilm XT1 sample images or skip straight to my verdict.