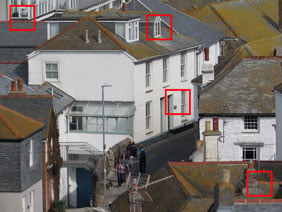 For this next test I zoomed both cameras in to an equivalent focal length of around 250mm. Still in Program auto mode at the base 80 ISO setting, the PowerShot SX510 HS selected 1/500 at f5.6. The COOLPIX L820 chose an exposure of 1/1000 at f5.6 at 125 ISO. As usual, the crops are taken from the areas marked by the red rectangles.

At this focal length, about a third of the way into the zoom range, the first three crops are taken from close to the edge of the frame. The most noticeable diffeence between these and the wide angle crops is that the lens doesn’t have nearly as much of a problem with chromatic aberration when zoomed in. There’s no evidence of colour fringing and even the detail in crops one and three from the very corners of the frame is reasonably sharp. The final crop from closer to the middle of the frame is a tiny bit sharper, but overall the 24-720mm lens produces very consistent results at this focal length.

Scroll down for more results at the longest focal lengths, or head over to my Canon SX510 HS noise results. 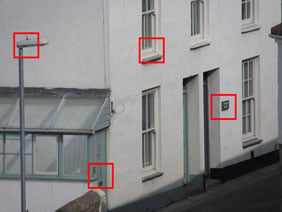 For this final test I zoomed both cameras in to their maximum focal length. Again, the exposure was left in Program auto mode with both models using their maximum available apertures of f5.8. As usual, the crops are taken from the areas marked by the red rectangles.

Now see how these models compare at higher sensitivities in my Canon SX510 HS Noise results.