The Canon PowerShot A2500 is a budget 16 Megapixel point-and-shoot compact with a 5x optical zoom, and a 2.7in screen. It’s an entry level A series PowerShot, only the AA-powered A1400 sits below it in the line-up.

The PowerShot A2600 offers everything you’d expect from a compact point-and-shoot model from Canon. It has a capable 5x zoom and, in the absence of optical image stabilisation, Digital IS is the next best thing. It’s got clever automatic exposure modes with scene recognition and face identification and a good range of effects.

While the 2013 PowerShot range as a whole is rather uninspiring and offers little in the way of new features or technical advances, the PowerShot A2500 at least has a very attractive budget price tag to attract point-and shoot photographers. It’s one of the cheapest PowerShots yet, costing only a little over half the price of the next model up – the PowerShot A2600. If you get the chance, I’d strongly recommend you take a look at the two models side-by-side and ask yourself if the bigger screen really is worth the extra cost. Otherwise, with the exact same features as its more expensive sibling, including the optical zoom for movie shooting and power-saving eco mode, the PowerShot A2500 is a much better value buy. 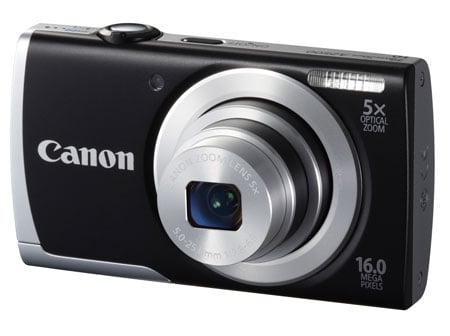 The PowerShot range has been growing progressively closer to the IXUS / ELPH design ethos over the years and, at a casual glance, you be forgiven for mistaking the PowerShot A2500 for an IXUS / ELPH. The size and weight are almost identical and the shape and styling differences are fairly minor.

And that’s not all these two models have in common, they both share the same 16 Megapixel CCD sensor and Digic 4 processor. In my image quality test the two turned in a similar performance, though the PowerShot A2500 fared less well at higher sensitivities, probably as a consequence of its more highly compressed JPEGs – it lacks the Superfine compression option of the IXUS 140 / ELPH 130 IS.

As a conseqence of sharing the same sensor and processor, the two also have a lot of features in common. Both offer Smart Auto with scene detection, they share the same sensitivity range with a maximum of 1600 ISO. The PowerShot A2500 lacks the Smile shutter options of the IXUS 140 / ELPH 130 IS, but does have face self-timer and can also offer Live View control for simple jargonless exposure and colour control. Bar a few scene modes, though, the shooting modes are broadly the same. Video capabilities are also the same with both models providing 720p25 HD and VGA resolution modes.

The PowerShot A2500 is between half and a third the price of the IXUS 255 HS / ELPH 330 HS, cheaper if you shop around, but you’re giving up a lot of features for that cost saving including a longer optically stabilised zoom, better image quality, full HD video, Wifi, and some really useful shooting modes. If your budget won’t quite stretch to the IXUS 255 HS / ELPH 330 HS, you could go for one of the older IXUS / ELPH models from 2012 which remain in the line up like the 8x IXUS 230 HS / ELPH 310 HS or the older entry level model, the IXUS 125 HS / ELPH 110 HS which also has a 5x zoom.

The PowerShot A2600 is the mid-range option Canon’s 2013 compact range. The rationalisation of the Powershot A range around the same sensor, processor and, for the most part, the same 5x zoom lens means they all effectively deliver the same image quality and performance and it’s features like stabilisation, Wifi and screen size that set them apart.

It’s obviously great that you can rely on the same kind of quality from the A2500 as you can from the flagship PowerShot A4000 IS and even some of the lower end IXUS / ELPH models. But for a very small addiitonal outlay you can add features like optical image stabilisation, built-in Wifi and additional shooting modes. And with older models still in the PowerShot and IXUS ranges, you might even gain additional features like a touch screen and better video modes at a similar price. Models to look out for include the touch-screen PowerShot A3400 IS and the IXUS 125 / ELPH 110 HS with 1080p video and a higher resolution screen, or for a similar model at a lower price, the earlier PowerShot A2300. But if you’re after a good budget PowerShot from the 2013 range, the A2500 is a solid option – no wonder it’s one of the best sellers right now.